Now that Red Bull’s petition for review about the Silverstone incident has been thrown out, we can get back to enjoying an utterly enthralling contest between these two greats, two of the fastest, most skilled racers in the long story of the sport. We are witnessing history playing out in front of our eyes and it’s a pity if some of those eyes are blinded by tribalism, delighting only in the victory of one over the other.

But that incident illustrated what looks set to be a hardpoint of their rivalry for the rest of this year: with Red Bull still developing its car to be ever-faster and Mercedes having long-ago switched off serious development, believing there is no potential left in it, Max Verstappen is the logical favourite to take the title. Lewis Hamilton is now the underdog.

Within that competitive structure, Hamilton’s strategy (prior to Silverstone) of keeping out of trouble, of backing out of 50/50 situations with his rival, is no longer the appropriate one. This is how he has been able to win titles in the previous few seasons, armed with the best car. That isn’t how he is going to win a title against a rival in a faster car. For that he needs to be a disruptor, putting all sorts of aggressive challenges upon his opponent, constantly coming at him from left-field so if they are close together Verstappen can’t be sure what he’s going to do next. Exactly the way Verstappen has been racing for the last few years, in fact.

Hamilton has long admitted he’s never entirely sure how to handle Verstappen in close quarters and has always just tended to give him room. But that was when he could afford to – in the context of trying to win world championships. 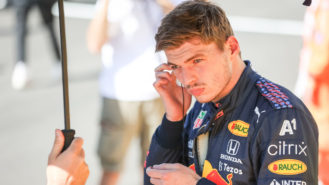 Verstappen’s logical way these past few years, when he has invariably been the closest thing Mercedes has had to a rival but never in with a chance of prevailing over a season, has absolutely been to take no prisoners. It’s the natural way he’s always raced anyway and so it’s not been a stretch for him.

With the fastest car beneath him, it’s no longer the most appropriate way. The competitive situation between Red Bull-Honda and Mercedes has inverted the way Verstappen and Hamilton need to play their game. Hamilton realised this at Silverstone. Verstappen seemingly did not.

Max says he is not going to change how he races. But he’s almost obliged to say that. To say otherwise is sending a message that he will always back out of it if forced to choose. But in reality he has to switch his chip from against the odds race winner to championship winner. That’s if the Mercedes can even stay within striking distance as Red Bull continues to develop its car.

“I don’t plan to fight,” he said going into this Hungarian Grand Prix weekend. “I just plan to check out.” Check out as in set pole, win the start, dominate from the front. There will be plenty of weekends like those where he can just bag the maximum points haul on pure performance superiority and his approach won’t be tested. But the crucial points are going to be those where Hamilton can get within a sniff of taking him on, can get wheel-to-wheel. That’s where Verstappen may need to go against his natural instincts.

Bear in mind also that Hamilton’s previous strategy of always giving Verstappen room wasn’t his natural instinct. Hamilton running free races with bold abandon, loves ‘the dance’ as he calls  wheel-to-wheel battling. It’s just rarely been the most appropriate approach for his situation. Verstappen has not actually encountered the natural Hamilton before. Because ever since Verstappen came into F1, Hamilton has been busy winning titles, of ensuring winnable championships were not lost. Either to complacency or to getting involved in fights he had no need to.

How Verstappen reacts to the post-Silverstone reality in those races where Hamilton can challenge him is going to be the dominant narrative of this season. There are either going to be more clashes between them – in which case the outcome of the title battle becomes almost random – or Verstappen relaxes into his new situation and shows the multiple dimensions of a natural champion rather than merely a natural racer.