So, a second Red Bull 1-2 on the trot – but this time it was Webber-Vettel.

“Now I know,” said Mark afterwards, “how Sebastian feels, controlling a race…” He did indeed control the German Grand Prix – obviously the race Vettel wanted most to win – and he said how important it was that this first victory, at the 130th time of trying, had not been handed to him. Very far from it. Webber started from pole position and eventually beat his team-mate by 10 seconds, despite suffering a drive-through penalty following a touch with Rubens Barrichello’s Brawn away from the grid. 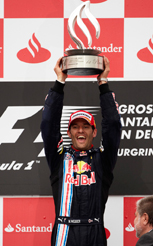 Mark said he thought the penalty ‘a little bit harsh’. Most onlookers thought it an absurdity, and all too typical of the nanny state in which FIA stewards appear to operate these days. Had they behaved in this fashion through the Senna and Schumacher years, Ayrton and Michael would have been under permanent suspension.

In the case of Webber, there was absolutely no malice aforethought – and it wasn’t as if he even gained from the incident. As they headed into the first turn, it was Barrichello in the lead. 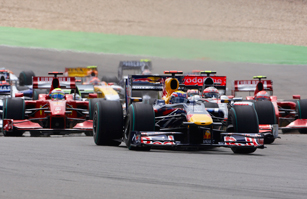 Behind Rubens there was a fair bit of chaos, perhaps an occasional inevitability in this silly time of KERS, when a handful of cars – in this case the McLarens and Ferraris – arrived at the first corner travelling considerably faster than the cars around them.

There was not too much of a problem at races earlier this season, for the KERS-equipped cars generally qualified too far back to threaten the front-runners at the start, but at the Nürburgring the McLarens were on row three, and Felipe Massa’s Ferrari on row four.

“At the start,” said Vettel, fourth on the grid, “the KERS cars came flying past me – at the first corner I felt I was in midfield!”

At the first corner, too, Lewis Hamilton – after a lightning getaway – arrived too fast, and ran wide. At one point his right-rear tyre came into contact with Webber’s front wing, and that meant a puncture and a slow lap back to the pits. Hamilton finished the race in 18th place, complaining of handling problems. 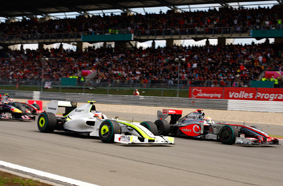 Team-mate Heikki Kovalainen, on the other hand, emerged from the initial fracas in third place, and was to provide sterling service to Barrichello and Webber by holding up the rest – headed by Jenson Button, Massa and Vettel – for some little time.
It was not until the end of lap 14 that Webber got into the lead.

By now Red Bull had been notified that Mark was to be penalised with a drive-through for the incident at the start, and the team very intelligently brought him in to serve it at the same time as Barrichello came in for his first stop. Thus, while Rubens was parked, Mark cruised through, and already so great was their advantage that the Red Bull was back on the track before Massa’s Ferrari arrived.

Five laps later Webber was in for his first – scheduled – stop, rejoining in eighth place. As Vettel later said, though, “Mark was the just quickest today – unbeatable,” and by lap 33 the Red Bulls were running 1-2, Webber conclusively ahead. Although this was billed as another contest between Red Bull and Brawn, in reality it was no such thing. 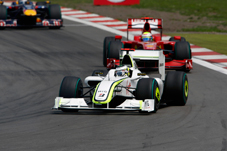 Button and Barrichello finished in the points, fifth and sixth, but in reality the Red Bulls – as at Silverstone – were quite in a class of their own, and Jenson’s World Championship points lead, while extremely comfortable, has been significantly trimmed in the last month.

Temperature plays a great part in the performance of these cars, the Red Bull running its Bridgestones considerably hotter than the Brawn. Thus, on cool days Webber and Vettel have an advantage, and on hot days Button and Barrichello benefit. Both the British and German Grands Prix were run in untypically cool conditions: Budapest and Valencia should be very much hotter.

Between the Red Bulls and the Brawns, third and fourth at the Nürburgring were Massa’s Ferrari and Nico Rosberg’s Williams. Felipe was especially happy afterwards, behaving almost as if he had won. “I can’t tell you,” he beamed, “how much I’ve missed being on the podium. I’m not saying we’re going to be challenging for victories, but at least there is a clear sign of progress, and I feel very happy…”

In the early part of the race Vettel had been trapped behind Massa: “Every time I got close,” he said, “Felipe used his special button,” this a reference to the Ferrari’s KERS. “I’d swap my KERS,” Massa responded, “for some of your downforce… 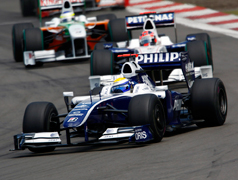 Nico was happy enough, too, after his fourth good points finish in succession moved him up to seventh place in the World Championship, but clearly the Brawn drivers were less than thrilled to be beaten by a Williams, and Barrichello was particularly incensed, coming out with a stream of invective suggesting that his team’s poor strategy had cost him victory. Disappointed Rubens may have been, but this was palpable nonsense: as Ross Brawn gently pointed out, Barrichello’s fastest lap was only the 11th fastest of the race…

There was enormous pleasure at Webber’s triumph, not only because it is always good to see a driver take his first victory, but also because Mark is an extremely popular fellow, and with good reason.

“Not too many Australian drivers have got into F1,” he said, “and not too many of those have been successful. I’m really very proud to have won a Grand Prix. I backed off towards the end because I was thinking of Jack Brabham, and what he used to say: ‘Win at the slowest possible speed…’” 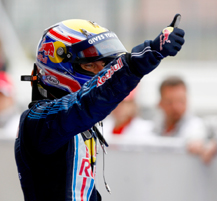