Formula 1 is about to host back-to-back races at the same circuit for the first time in its history, and with that comes some trepidation about what – if anything, might change.

Unless you’re Red Bull or Lewis Hamilton, you probably don’t want that much to be different. Certainly as fans we would all love to see a repeat of the thrilling race we got on Sunday, but is it likely?

Leaving aside the weather – with the potential for rain and a mixed-up grid in qualifying – there are plenty of variables that could certainly shake up the order this weekend.

Let’s start with the teams at the front.

Mercedes looked like it would cruise to a one-two in the early part of Sunday’s race, but even before the numerous Safety Car interruptions that allowed Alex Albon to challenge, the team was facing a gearbox issue. Trackside engineering director Andrew Shovlin told F1 it’s currently an inherent problem that won’t be a quick fix.

“On Friday you saw that Valtteri had an issue at the end of one of the sessions so that was first a sign that we had a problem, we’ve had recurrence issues over the course of Saturday and going into the race we were expecting it because it seems to be a feature of the model,” Shovlin said. “So, at the moment if we build the car and run it this problem will appear at some point – it’s just a question of how soon.

“It’s not manifesting itself as one thing … it’s basically a build-up of electrical noise that starts to interfere with the various systems so with Valtteri we saw that halfway through the race, got progressively worse, with Lewis it appeared later. But it’s electrical noise that’s then affecting a lot of different things.”

Team principal Toto Wolff was more confident that his team would be able to address the issues to some extent, but it wasn’t just because it was the first race of the season that we saw teams having problems.

“Reliability issues come from the kerbs, it’s a great track but if you run the kerbs too wide which is within the rules, you damage the suspension,” Wolff said. “By nature the drivers want to go as quick as possible, but by doing that you risk the suspension, damage or vibrations to the car and break it.”

That’s something that Shovlin echoes, as he believes holding two races at the Red Bull Ring poses a much bigger challenge than the usual season-openers that teams are dealing with.

“Austria’s just a really horrible circuit for the cars,” Shovlin said. “Normally you start the season somewhere like Melbourne, and Melbourne’s a track where it’s very difficult to overtake, and when it’s difficult to overtake you can then afford to look after your car and people aren’t going to get by.

“This is a circuit where it’s quite easy to overtake and as a result if you don’t use the kerbs, if you don’t push hard, you’re at risk. That’s one of the factors, but it’s the kerbs themselves that are very, very violent and you spend a lot of the lap running on them. For us, that was that issue and it probably doesn’t help that it’s nearly 30 degrees here, the air’s a bit thin so it’s hot, there isn’t as much cooling as you normally get, and all the temperatures inside the car are high.

“But every year this is a race of attrition and having it as the first race and then having two of them, one after the other (will be tough) because we think we can make some strides to improve some of our problems but others aren’t going to get better on the same track.

“So a lot of people know you’ve got another dose of it coming up, so it’s a race against time to try and make a bit of headway into those complications.” 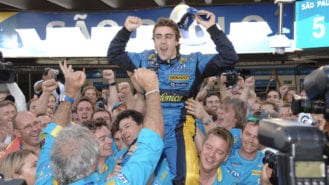 Red Bull also has to deal with issues ahead of Sunday, having seen both cars retire due to different problems in the opening round. That clouded just how competitive Max Verstappen could have been in the race, as he had just started to peg back Valtteri Bottas due to his tyre advantage in the opening stint before slowing.

If Honda and Red Bull can find a quicker fix than Mercedes, then the team will have ambitions of fighting for a win once again. If not, then it could find itself falling into the exciting midfield battle behind.

Ferrari overachieved with Charles Leclerc’s podium, but a combination of good strategy and great driving from the Monégasque meant it was able to take advantage of the issues that others were facing. Even if similar chances don’t present themselves, there could be a quicker Ferrari out on track this weekend than last.

“We knew we would have a tough start to the season and it was even more so than we had expected,” team principal Mattia Binotto said. “That’s why we’re working flat out to try and already bring some of the updates due for Hungary to this next race. It’s a race against time but we’re doing our utmost.

“The fact we are racing again at the same track is a further reason to bring the updates here, so that we can confirm if they work and that our development direction is the right one.”

Being able to do back-to-back comparisons on the same circuit just one week apart is an attractive proposition for any team with upgrades, so we could be able to see their direct impact. But even for the smaller teams that don’t have new parts, it offers a chance to learn from their mistakes.

Haas, for example, went far too extreme when it came to its brake cooling and saw both cars retire. Getting the chance to understand its issues and rectify them could certainly change where it factors into a race this weekend.

“You can take a lot away from the first week and just use what you can,” Steiner said. “Some things will be usable and maybe some will not, but for sure it’s a nice thing to have that we can now come back here and should we have a dry race at least to build on what we learned this week.

“I’m actually not too worried about racing here again, actually at the moment I’m pretty happy that we stay here and can try and get a little bit more out of it. So not running around we have more time to focus on what we want to achieve next weekend.”

Ultimately, what we should see are teams up and down the grid getting closer to the true potential of their cars at this circuit, and it’s already a grid that looks extremely closely matched in many areas.

The characteristics of an unforgiving circuit with plenty of overtaking opportunities don’t change, so whether the pecking order does or not, the potential for another classic doesn’t.