Pierre Gasly bolstered his reputation with a superb season at Scuderia AlphaTauri in 2020, highlighted by his opportunistic win at Monza. But what does the future hold for the Frenchman now that he’s unlikely ever to return to sister team Red Bull Racing?

His future with AlphaTauri for 2021 was confirmed at an early stage, providing some welcome job security – a privilege not accorded to his team-mate Dany Kvyat, who was turfed out at the end of the season.

However, Gasly could be forgiven for asking his bosses why he wasn’t given a second chance at RBR after it became clear that the struggling Alex Albon was unlikely to survive into the new season.

He had experienced his own problems alongside Max Verstappen at RBR in 2019, before ceding to the ascendent Albon for the second half of the year, and returning to the then Toro Rosso team.

If F1 had an award for “most improved driver,” Gasly probably would have won it

He duly rebuilt his confidence and reputation. He took a second place in Brazil at the end of 2019 and then performed consistently well throughout 2020 with the renamed AlphaTauri.

If F1 had an award for “most improved driver,” Gasly probably would have won it.

“I put my good results last year down to being more experienced,” he says. “As it was my third season in F1 and also the first time I had stayed for a second full season with the same team.

“I’d say it was mainly the continuity from 2019 that paid off, working with the same engineers, having a better understanding of what we are doing and as a team we all succeeded in exploiting the experiences from the previous two years.

“I was really satisfied, but there is still room for improvement, room for fine-tuning. What you need over the whole year is to be consistent and to score at every opportunity.”

By the middle of last season he appeared to be the man in the Red Bull camp most qualified to replace Albon, even before Monza moved him into the elite group of Grand Prix winners.

Ultimately Helmut Marko and Christian Horner decided to break with the usual protocols and look outside the Red Bull family by taking Sergio Perez.

The general feeling in the camp was simply that Gasly had already blown his chance in the senior team. Despite his apparent rehabilitation at AlphaTauri, he was not considered worthy of a second shot at the difficult job of being Verstappen’s team-mate.

That decision has left Gasly in a difficult situation. The whole point of Toro Rosso/AlphaTauri over the years has been its role as a holding station for future RBR drivers, even if team boss Franz Tost is keen to move away from that image and position the Faenza outfit as a serious competitor in its own right. 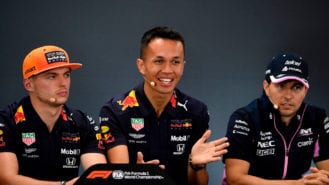 Any chance of real career progression for Gasly thus relies on him attracting the attention of another top team.

Sebastian Vettel, Carlos Sainz and Daniel Ricciardo have all proved that there is indeed life beyond the Red Bull camp.

It’s certainly possible for him to move if an opportunity opens up, and logic suggests that he would be of interest to Alpine, should current incumbent Esteban Ocon underperform alongside Fernando Alonso in 2021.

To land a job elsewhere he’ll have to maintain the momentum that he built up in 2020, and keep his name in the headlines. That might not be so easy, as the likes of Aston Martin, McLaren and Alpine all have strong packages.

However, the indications are that Honda has made a step, while AlphaTauri’s seventh place in the 2020 Constructors’ Championship ensures that under the new rules the Italian outfit now has more wind tunnel time and CFD usage than those who finished ahead, which will be a useful boost to development. In addition, this season the newly-instigated budget cap will start to rein in the better-funded teams.

In other words AlphaTauri is not a bad place to be at the moment, irrespective of its secondary status within the Red Bull family.

Gasly should be armed with a car that is capable of qualifying in the top 10, and which will allow him to hustle for points every weekend. He should thus have a decent chance to further bolster his reputation in the paddock.

“The car did seem pretty good,” he says of 2020. “Where we are in the midfield, all the teams made a lot of progress and the gaps are very small. We finished seventh in the championship, but there were times when we were fighting to be the fourth or fifth best car in the field.

“We were fighting some very good teams that have big budgets and a lot of experience. Last year, we had a car that allowed us to fight with them, and I got through to Q3 quite often.

“This year I hope we can make a step up, that will allow us to be nearer the front of the midfield.”

The big challenge for Gasly in 2021 is the arrival of his rookie team-mate Yuki Tsunoda.

On the one hand the imbalance of experience makes him the de facto team leader, and ensures that he has the chance to lead the way on car development and set-up, something that was not the case alongside Kvyat last year.

On the other hand he is the clear target for Tsunoda – who has the potential to make an immediate impact, helped by an extensive winter test programme in a 2018 chassis.

The Japanese driver carries huge expectations from Red Bull and Honda, and both have great faith in him and want him to become a future superstar.

The management clearly sees Gasly’s role in 2021 not just as a benchmark for Tsunoda, but as a teacher from whom he can learn. Tsunoda is known to be adept at soaking up information from engineers and others around him, and his eyes will now be on Gasly.

“I reckon Pierre is one of the strongest drivers in F1 nowadays,” says team principal Tost.

“Pierre’s good technical understanding allows him to get the best out of the car. Pierre has been with the team for some time now, so he is familiar with all procedures and with our way of working, he will be a good leader, helping Yuki in his development.

“He knows how to win a race – as he proved last year in Monza – and if we provide him with a competitive car, I expect him to be very successful this season.” 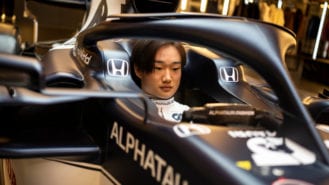 Why Yuki Tsunoda is set to surprise F1 this season - MPH

AlphaTauri’s new signing Yuki Tsunoda, less than half the age of Kimi Räikkönen, is the first person born in the new millennium to make it to F1 driver. He’s remarkable…

Warming to the teacher and pupil theme Tost adds: “Pierre is a very high-skilled driver, and he now also has the necessary experience to be a leader in the team and for Yuki.

“Every driver compares themselves with their teammate so the better the latter is, the more you are pushed to improve yourself.

“Yuki can learn a lot from Pierre in all aspects, for example comparing the lap times, the set-up of the car, the driving lines – this is all very important, especially on those tracks that are new to Yuki.

“If you have a strong and experienced team-mate you can compare many different parameters, which help to improve your own performance.”

“I know Yuki, he is a competitive guy and a very quick driver”

It’s a tricky situation for Gasly. He has to keep his bosses happy by playing the teacher role while knowing that the better he performs that task – and the more competitive Tsunoda becomes – the harder his own life will be.

Gasly is well aware of the potential of his new team-mate, and he acknowledges that all he can do is continue to get the job done on track, and carry on where he left off last year.

“Of course, Yuki’s arrival means I will have more responsibility within the team and I’m ready to take on the role of team leader,” he says.

“However, he is a very quick driver, and he will help us move the team forward. I know Yuki, he is a competitive guy and showed what he can do in F2, that’s why he was promoted to F1 after just one year. We will work together to achieve that.

“He lacks experience, so it won’t always be easy for him, but I think he is talented, and it will also be up to me and the team to lead the way.

“His arrival doesn’t really change my approach, which will be the same as last year, when we got the most out of what we had to work with at pretty much all the grands prix, apart from one or two.

“So, we must keep going with the same philosophy, as I really believe last year was the team’s best in terms of the way it worked, the development, the performance and in the way it managed the race weekends.

“I think that goes for me too, and we just have to keep going like this to try and do a little bit better than we did last year.”

Gasly is expected to be quicker than his team-mate, given that this is his fourth full season. However if Tsunoda can push him hard from the off, and start to outperform him, life could begin to get a little uncomfortable for the older man. It will be fascinating to see how their battle unfolds.