With the news that Williams Racing has been sold to US investment firm Dorilton Capital, Sir Frank Williams’ tenure overseeing Formula 1’s third most successful outfit of all time has come to an end.

It is a team steeped in F1 history, and while Sir Frank has helmed Williams for 43 years, his time in F1 comes in at over a half-century. So even with the change of ownership, one of the sport’s last great independent teams will not vanish from the grid.

It has recorded 114 race wins, nine constructors’ championships and seven drivers’ crowns with some of F1’s all-time greats. Williams has seen it all, done it all and won it all.

Here is a look back at one of the greatest Formula 1 teams, from its origins to championship years and beyond. 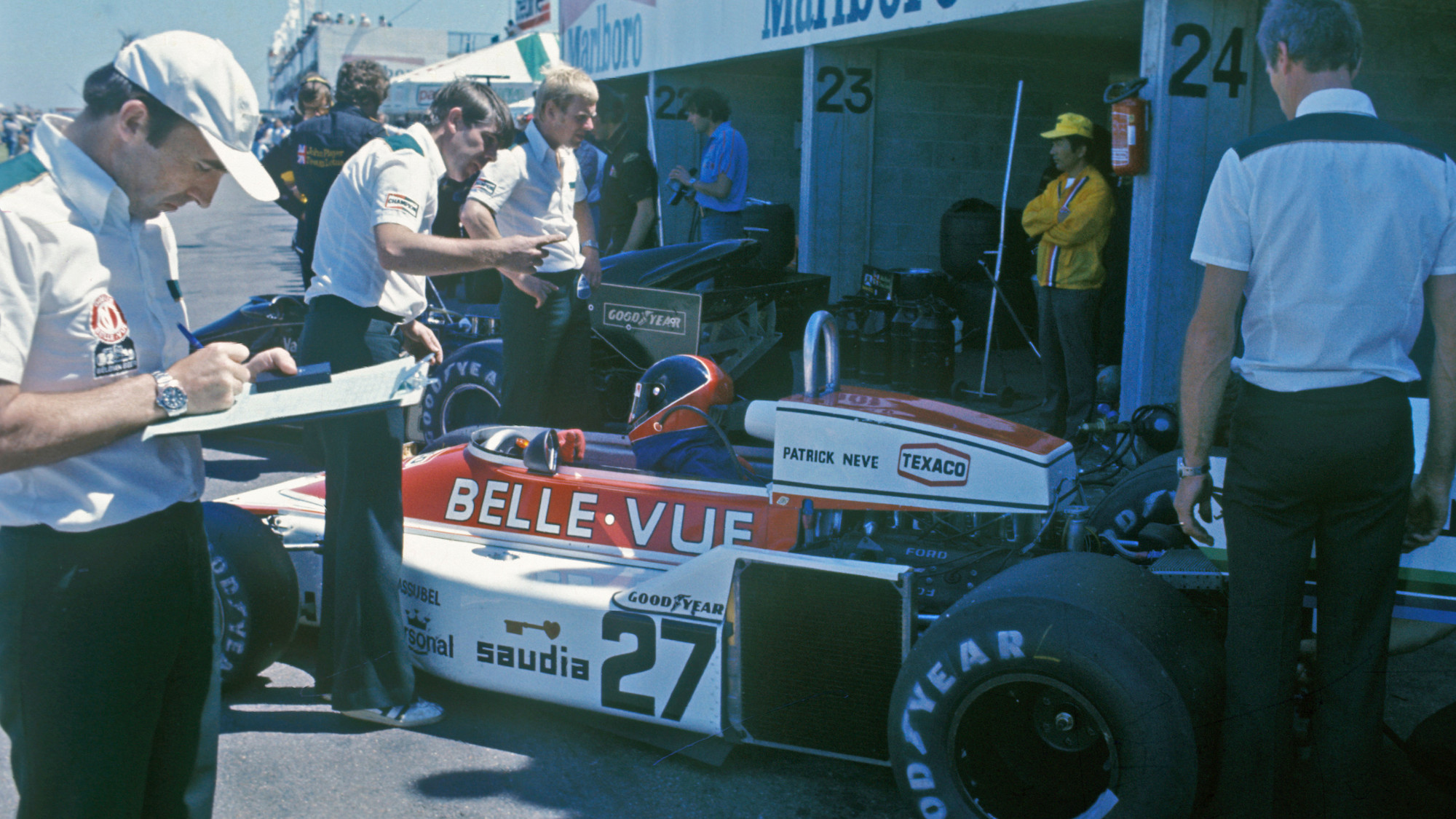 Following the unsuccessful Wolf-Williams Racing venture with Canadian businessman Walter Wolf, Frank Williams split and began his own team: Williams Grand Prix Engineering. Along with Patrick Head, the team made its first appearance on the F1 grid in 1977 with a March 761. It would not make the points in its first season of competition.

Following a slightly more successful follow-up season, Williams recruited Frank Dernie in 1979 to help Head, design the FW07. The team came close to victory in the season’s early races and finally, at Silverstone on home soil, took its first F1 win. Clay Regazzoni finished comfortably ahead of anyone else. But for an engine failure for Alan Jones, it might have been a dominant 1-2 for the team.

The next year, Carlos Reutemann joined Jones at the rapidly improving Williams team and between the two of them, took six victories that year. Jones became the first to win the drivers’ title for the team, making it a championship double in just its fourth season in F1. 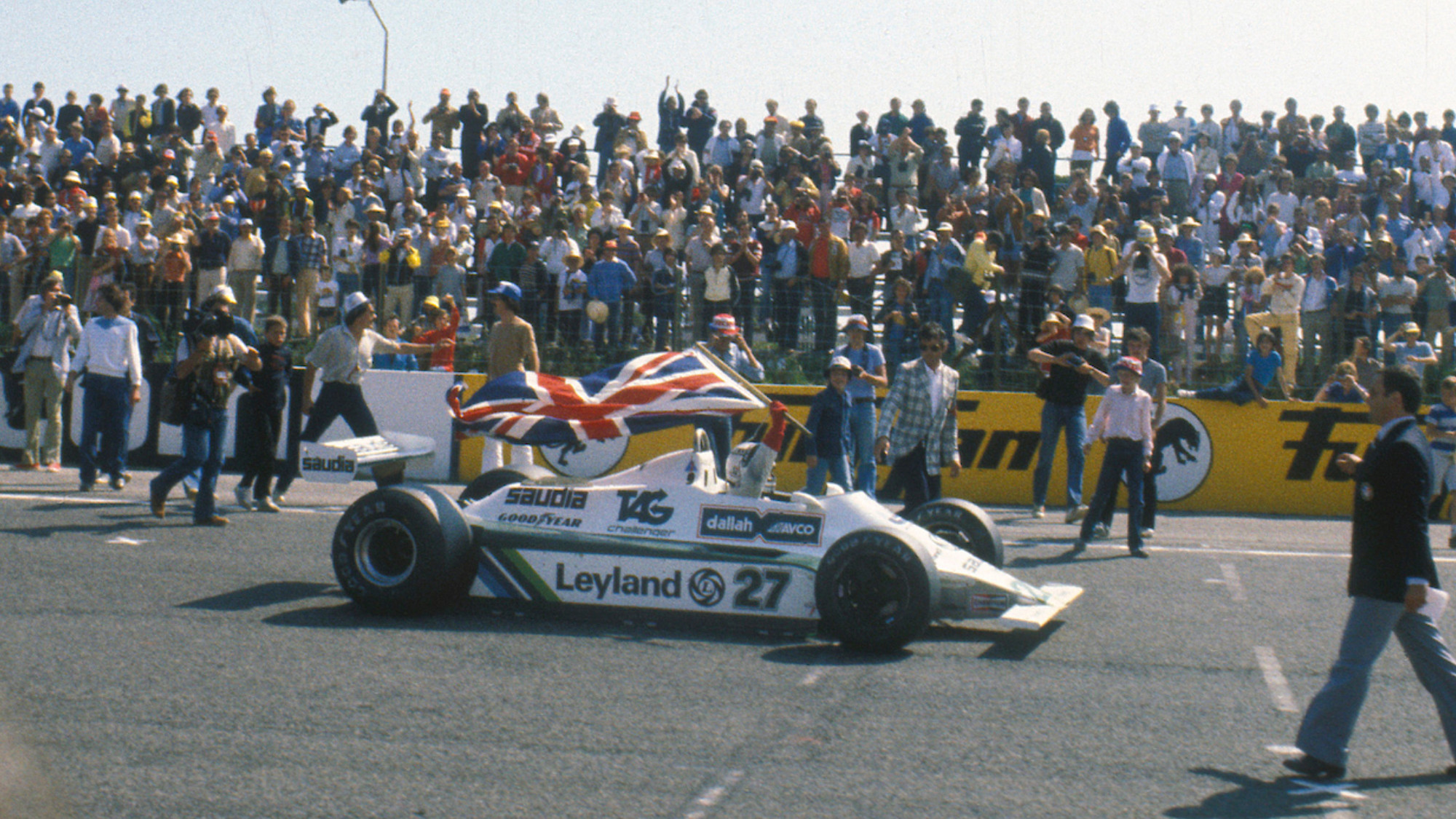 Williams joined forces with Honda in 1983 but experienced somewhat of a barren spell following its sprinkling of success. In 1985, Nigel Mansell partnered Keke Rosberg in what was the beginning of a legendary partnership between British driver and team.

At that year’s British Grand Prix, Rosberg set a blistering lap to secure pole position at Silverstone in what stood as F1’s fastest-ever lap at an average speed of 160.938mph. The record wouldn’t be broken until 2003.

1986 was the third time Williams won the constructors’ championship but it was also its toughest yet as an F1 team. En route to an airport after testing at Paul Ricard, Frank Williams was left paralysed following a road accident and did not return to the paddock until the following year.

The battle between Mansell and Nelson Piquet lives on in the memory of many F1 fans around the world, The Brazilian bested his team-mate, turned bitter rival, over the course of a dramatic season, only for both drivers to miss out on the title, with Mansell’s tyre blowout at the season finale in Adelaide. A precautionary pitstop for Piquet handed the championship to Alain Prost. 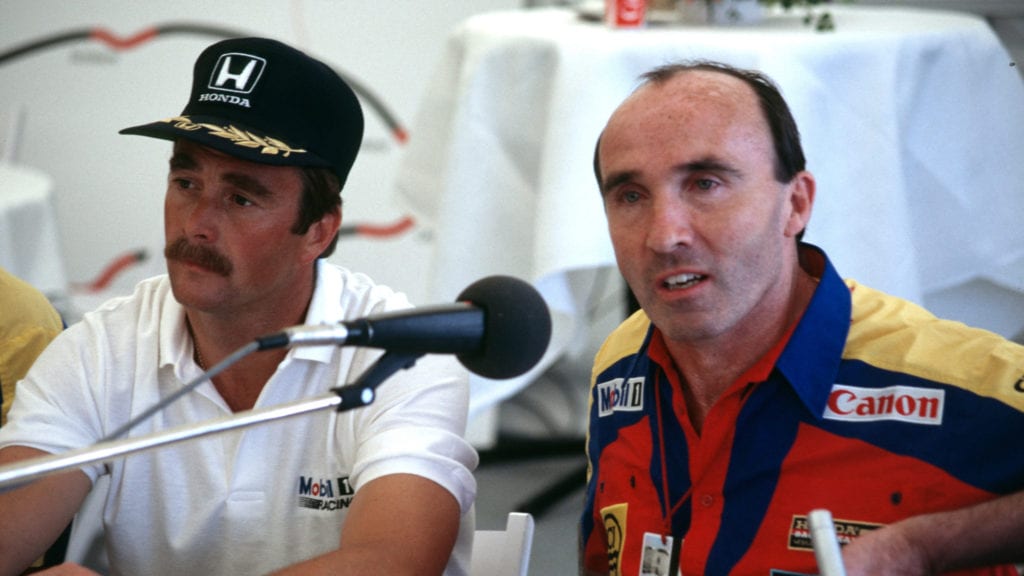 Frank Williams back in the paddock in 1987 after his accident 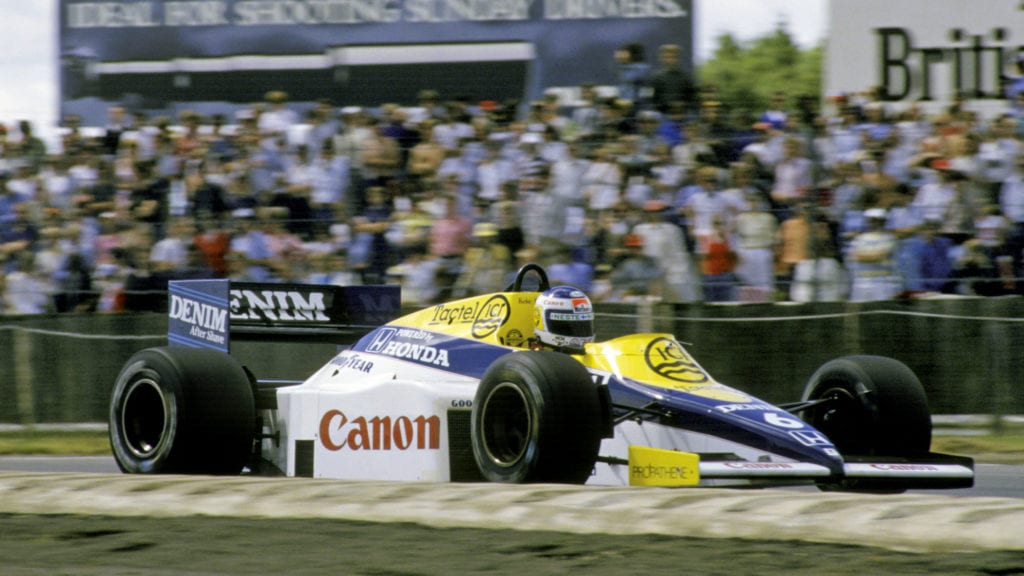 Renault came on board in 1989 after Williams’ middling year with Judd engines, following the early end of its Honda contract. The partnership with the French manufacturer led to the team’s most successful period in F1.

McLaren‘s domination was not on the same level as it had been at the tail-end of the ’80s and a return to Grove for Mansell coincided with an upturn in fortunes for the team.

Although Ayrton Senna notched up his second and third titles in ’90 and ’91 respectively, Williams surged to the head of the field in 1992 with the brilliant FW14B with active suspension.

With one of the most dominant cars in F1 history, Nigel Mansell finally claimed a world championship crown as Williams achieved 10 race wins that year, nine of them by Mansell himself, ending the season with over double the number of points than the closest non-Williams driver of Michael Schumacher. 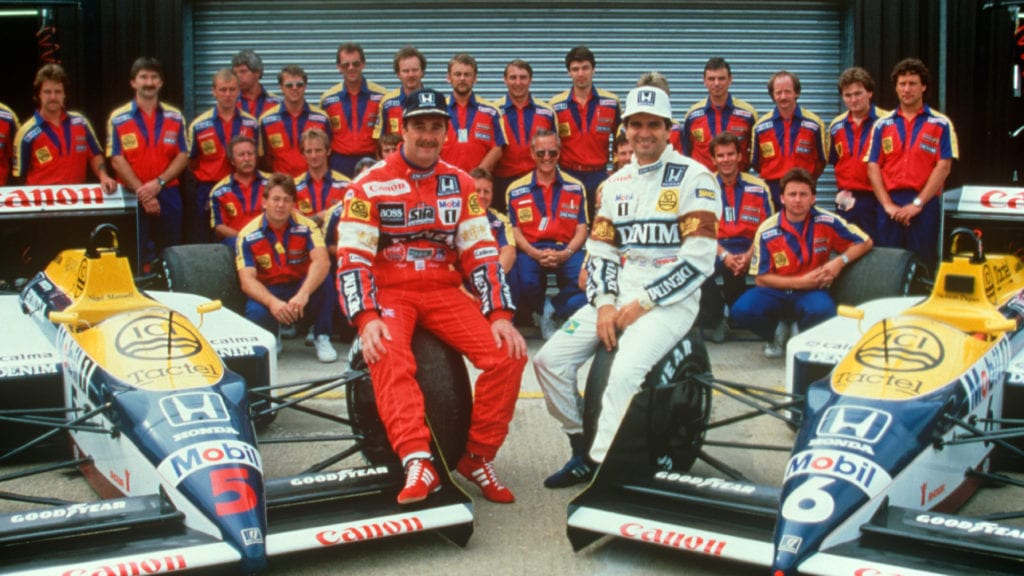 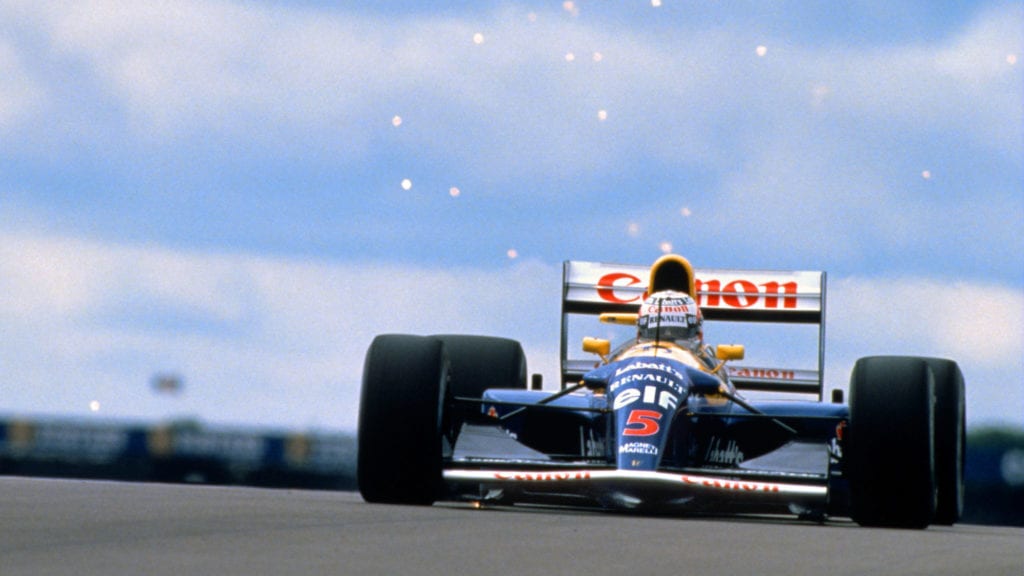 The FW15C was more than a worthy successor to the car before it and is regarded as one of the most technologically advanced cars to have raced in Formula 1. Its revised active suspension system and ABS braking sent Alain Prost on the way to his fourth and final F1 championship. With team-mate Damon Hill the team notched up another 10 victories that season.

With Canon and Camel sponsorship gone, Rothmans joining and Prost retiring, Williams signed Senna for the 1994 season. The banning of electronic aids left the team with an ill-handling car for the opening rounds, putting Schumacher and Benetton on course of the title.

Senna’s fatal crash at Imola left the team reeling, and its season in the hands of an inexperienced Hill. The team secured another constructors’ championship but missed out on the drivers’, Hill ending up a single point behind winner Schumacher following his controversial Adelaide defence.

1996 and 1997 brought back-to-back title doubles with Hill winning comfortably in ’96 and Jacques Villeneuve overcoming a Schumacher curveball at Jerez that resulted in the Ferrari driver being disqualified from the championship. 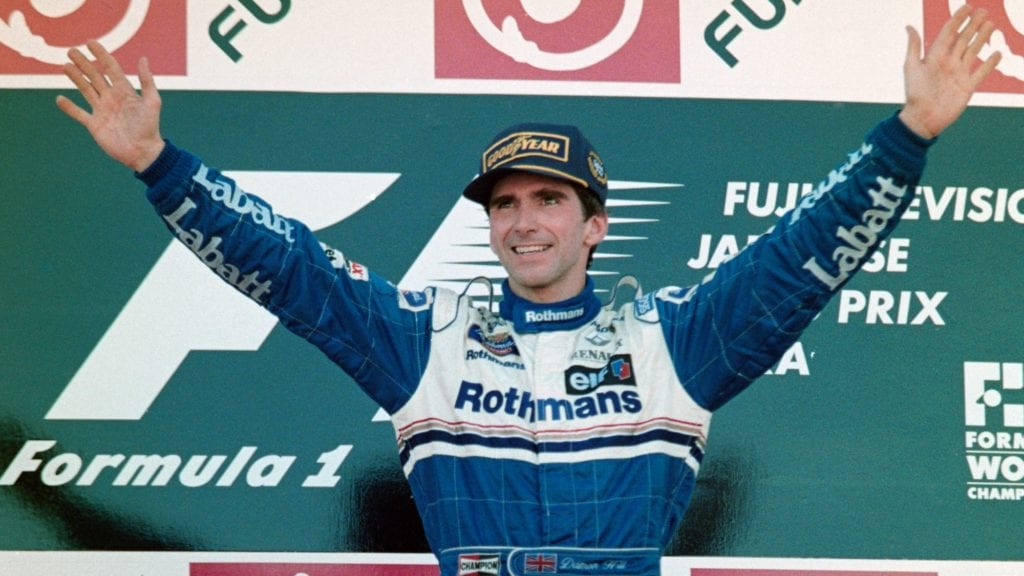 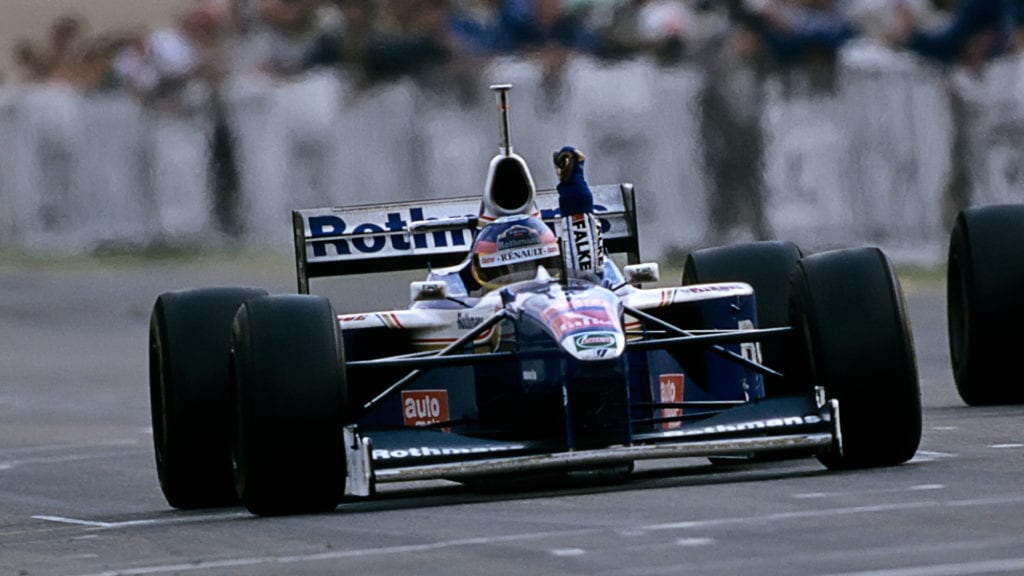 …with Damon Hill and Jacques Villeneuve

It had the makings of a title-capable team on paper but things never quite worked out that way in reality. With BMW on board as engine supplier, Williams had a works partner once more but the combination coincided with Ferrari‘s peak and the Brawn-Schumacher-Todt trifecta that dominated the early 2000s.

Between 2001 and 2004, Ralf Schumacher and Juan Pablo Montoya took nine wins but could not better the Maranello masterclass. Montoya’s 2003 qualifying lap at Monza, though, broke the F1 record for the fastest lap of all-time, bettering the record set by Keke Rosberg for Williams back in ’85. His record stood until 2018.

By 2005, the team had slumped to fifth in the constructors’ championship, signalling the end of the six-year BMW deal. 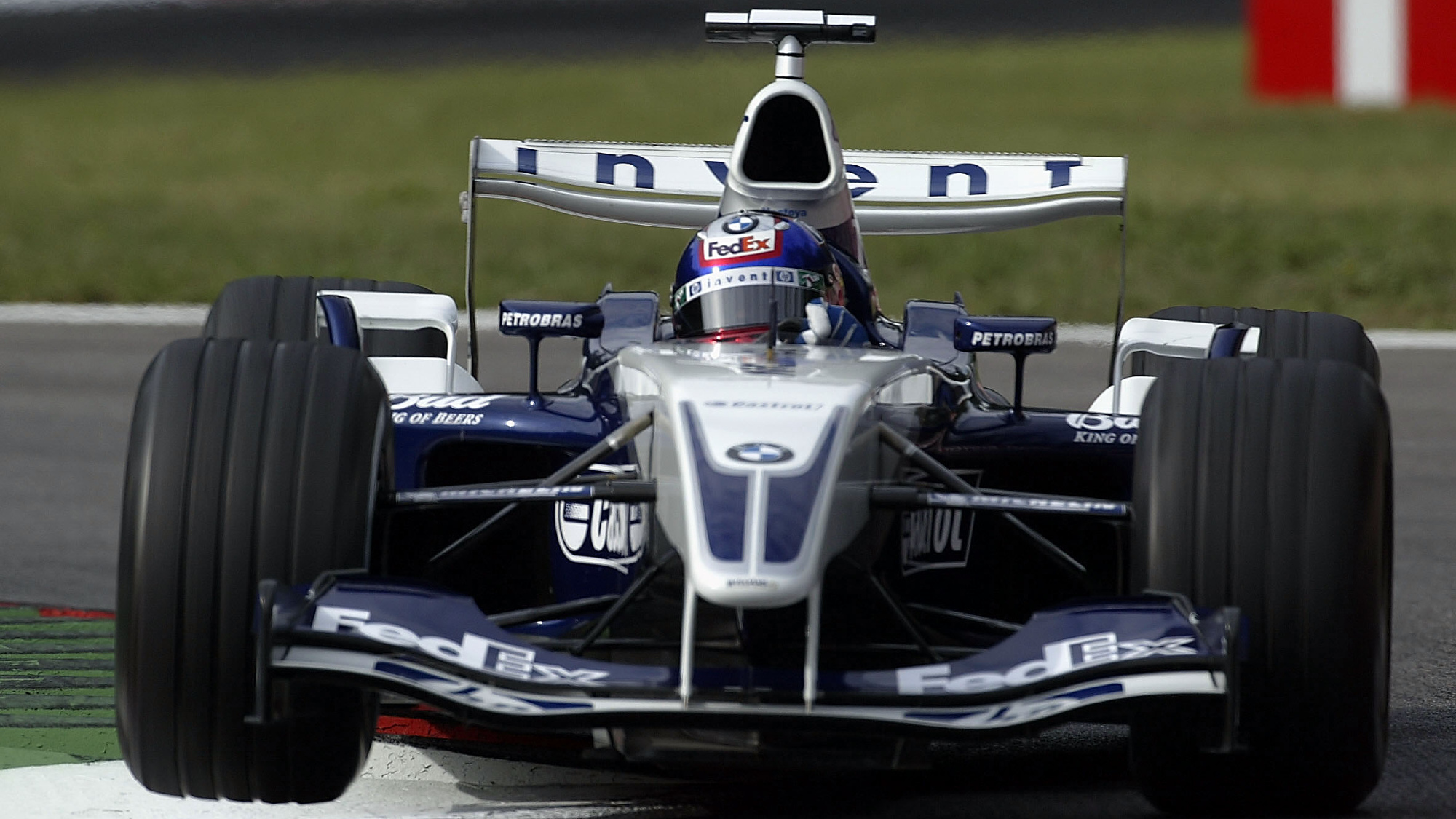 Brief spells with Cosworth, Toyota and Cosworth once more brought middling to poor results as Williams slipped to ninth in the standings by the end of 2011.

2012 came along and with it, the historic partnership with Renault was rekindled though the team wasn’t quite as competitive as it once was with French power in the car.

A wild start to the season though had four different winners in four races, and Williams was about to join the party.

Its barren spell from the top step was ended in Spain and victory came courtesy of the unlikely Pastor Maldonado holding off two-time world champion Fernando Alonso in Spain back in 2012.

To date, it remains as the team’s last F1 win. 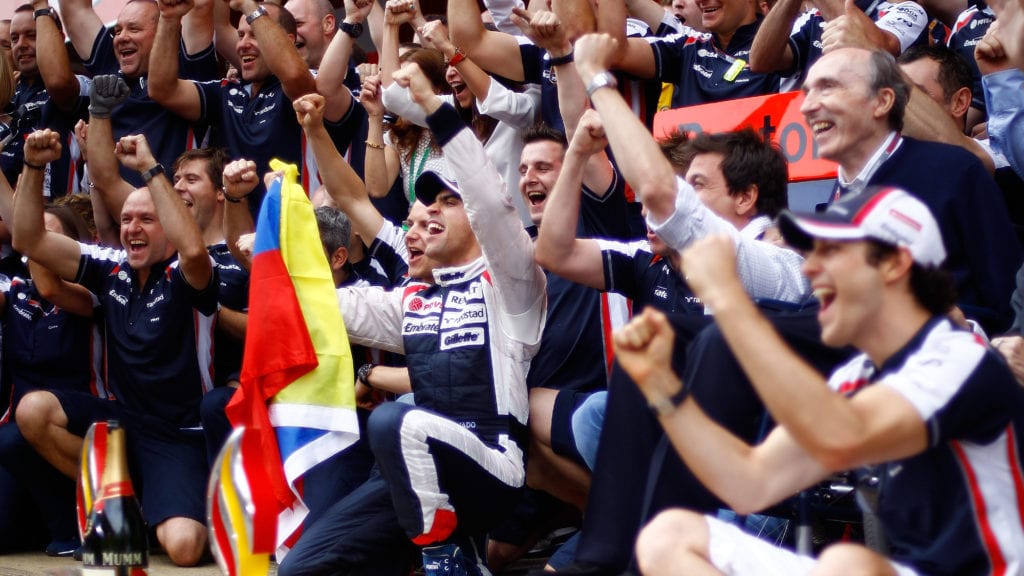 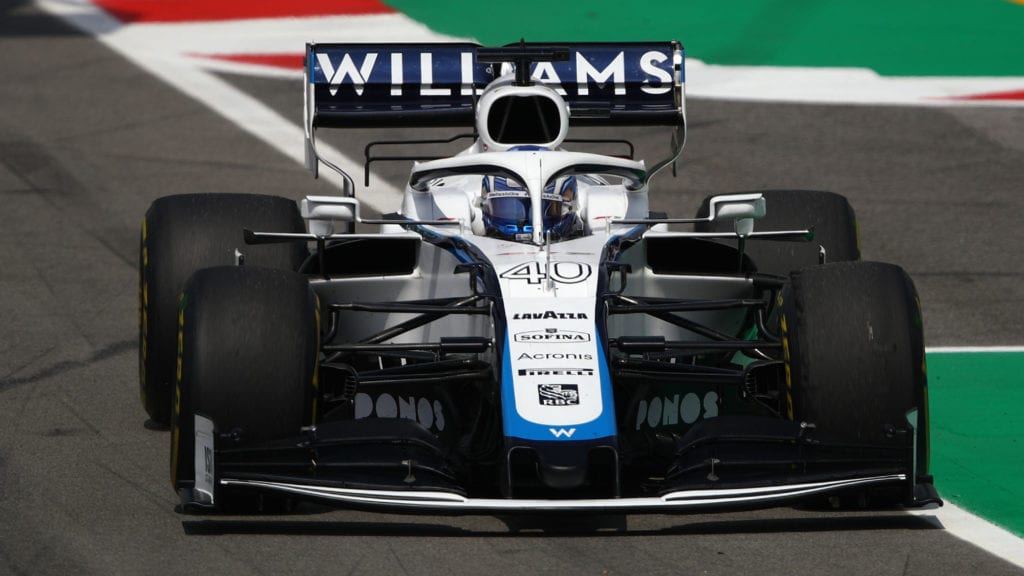 Williams remains as the second most successful team of all-time

As Formula 1 switched to hybrid engines for 2014, Williams joined forces with Mercedes at just the right time.

Eight podiums that season gave the team its highest finish in the standings since 2001, ending up third behind the works Mercedes outfit and Red Bull.

Sadly though, that year remains the peak for the team in this era of racing and was the start of a slow decline from competitiveness to financial difficulty.

The past two seasons have not been kind on Williams, ending last in the standings in both but there are signs this year that the team is on the path to recovery.

The signing of the new Concorde Agreement will likely give the team a better financial footing from 2021 onward.

With the announcement that the team has been sold, its immediate future in the sport looks a lot clearer now funding is coming and the famous name will be on track, hopefully for many more years to come.