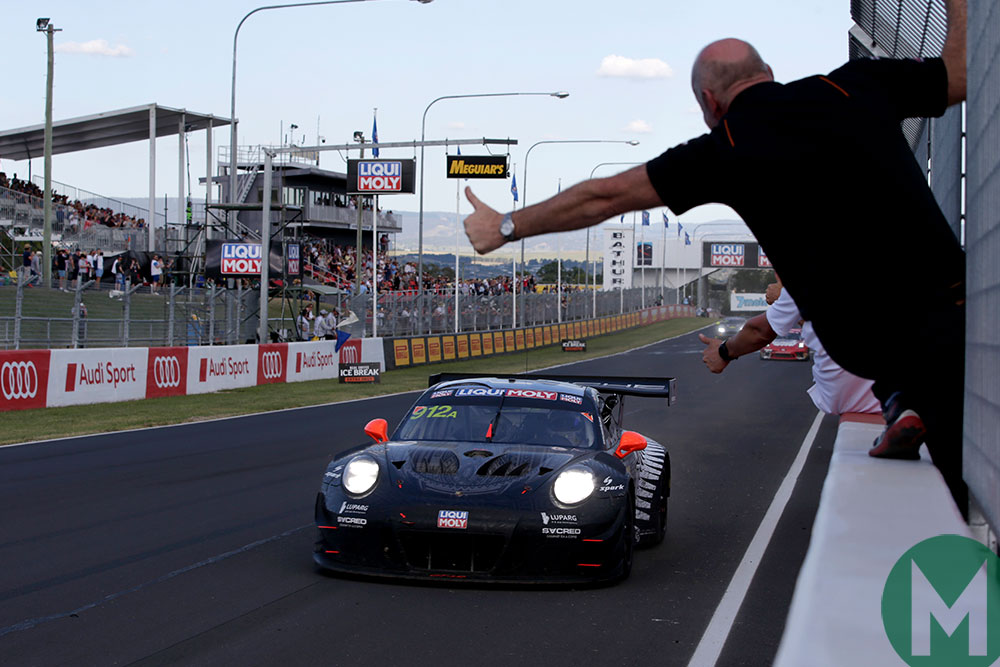 The vital moment of Campbell’s charge on fresher tyres was elbowing his way by Jake Dennis’s Aston Martin, and an unorthodox point of the track at Forrests Elbow, to lead with just over 10 minutes of the 12 hours to go. The Porsche car also survived a post-race investigation into Campbell’s earlier pass of Chaz Mostert to take third. There had been earlier controversy too as Dennis was stripped of pole position first with a two-place grid penalty for pitlane speeding then he was sent even further back in the starting order due to a technical breach.

Yas Marina Circuit, Abu Dhabi: Dylan Pereira dominates race one of round four, leading all the way from pole in his first race of this season’s championship.

Pereira built a 7sec lead, and it was just as well as he got a 5sec penalty for shortcutting a turn. Championship leader Al Faisal Al Zubair, who finished third in the first race, got the race two win when Pereira picked up another 5sec penalty for corner cutting and this time could only build a 3.5sec advantage ahead of Al Zubair on the road. Third-on-the-road Berkay Besler also did just enough to stay with 5sec of Pereira and pip him for second in the results.

A red flag and safety car interrupted first race was won by Armstrong with Lawson third, but in the reverse-grid race two Lawson got more than his own back by winning with a brilliant late move on Esteban Muth while Armstrong finished fourth. But in the third race matters shifted markedly to Armstrong as he won – taking the historic New Zealand Motor Cup with it – and Lawson crashed out.