America’s oldest sports car race takes place at Sebring in central Florida next week on Saturday March 21, starting at 10.40am US east coast time. The 12-hour race on the bumpy old airfield circuit was first run in 1952 and was a World Sportscar Championship race for 20 years from 1953-72. These days, Sebring is the second round of the United SportsCar Championship and will feature much the same line-up as we saw at Daytona’s Rolex 24 Hours in January. 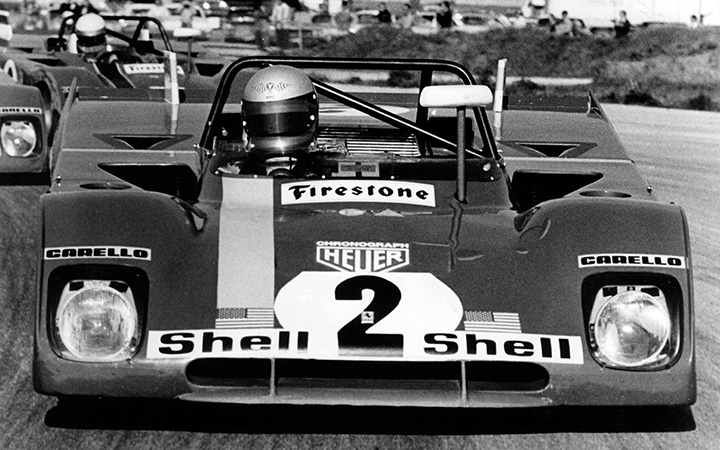 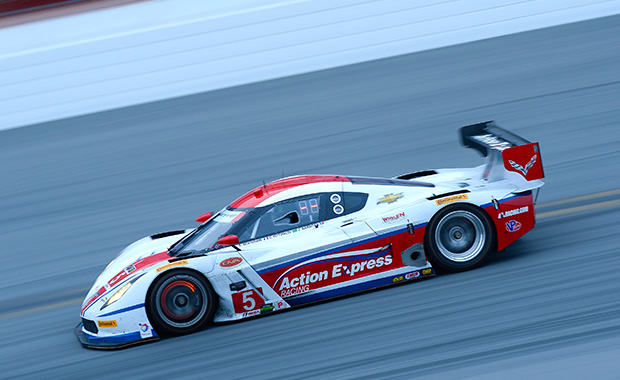 Sebring has always attracted big fields. Fifty years ago no fewer than 65 cars started the race with 43 of them classified as finishers. Sebring was amid its world championship heyday at the time and 1965 was particularly memorable because it was the year Jim Hall and his Chaparral broke Ferrari’s domination of the race.

Between 1956-72 factory Ferraris won Sebring nine times and from 1956-64 Enzo’s cars were beaten only twice – by Maserati in 1957 and Porsche in 1960. But in 1965 Jim Hall and Hap Sharp led most of the way to score a resounding win aboard Hall’s Chaparral 2A-Chevy. It was the first American car to win at Sebring since John Fitch and Phil Walters drove one of Briggs Cunningham’s C4Rs to win in 1953.

Everyone was amazed at the Chaparral’s speed in ’65 but few people expected the car to last 12 hours. In qualifying Hall broke the track record by nine seconds and the fastest Ferrari was 12 seconds slower! An early rainstorm wreaked havoc on some of the field with cars spinning everywhere, but this was long before the likes of full course yellows and pace cars, so the race carried on uninterrupted.

Eventually, Hall and Sharp won by four laps from a Ford GT40 driven by Bruce McLaren and Ken Miles. The first Ferrari to finish was David Piper’s third-place 275LM co-driven by Tony Maggs. The winning Chaparral from 1965 will be demonstrated by Hall’s son, Jim Jr, on Friday and Saturday during this year’s pre-race festivities. 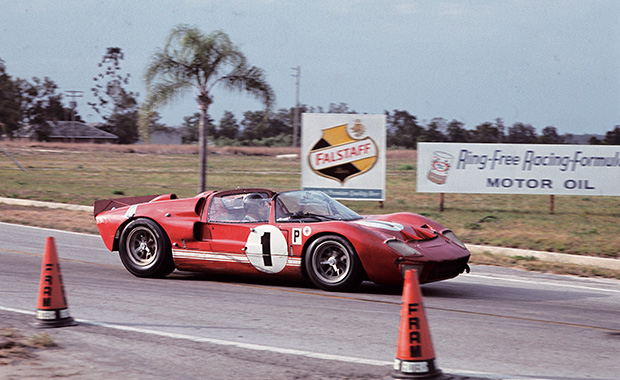 Andretti and McLaren led almost all the way, beating team-mates AJ Foyt and Lloyd Ruby by 12 laps after Jim Hall and Mike Spence’s winged Chaparral 2F blew its engine. It was hot and windy at Sebring in ‘67 and the wind jammed the winning Ford’s air intakes with paper and debris, turning the car into an oven.

“It was so hot in that car that between stints I spent half the time in the trailer with the shower trickling over my head,” Mario recalls. “That was probably the most physical race I had in my life. If you look at some of the photos in victory lane my eyes were sunk in my head about an inch. I was really spent.”

In 1968 Porsche finished 1-2 with a pair of 907s driven by Jo Siffert and Hans Herrmann and Vic Elford and Jochen Neerpasch, but Ford won again in ’69 with one of John Wyer’s GT40s driven by Jacky Ickx and Jackie Oliver. Ferrari bounced back in 1970 as Andretti scored one of his most memorable wins after his Ferrari 512S broke and he took over the sister car of Ignazio Giunti and Nino Vaccarella. 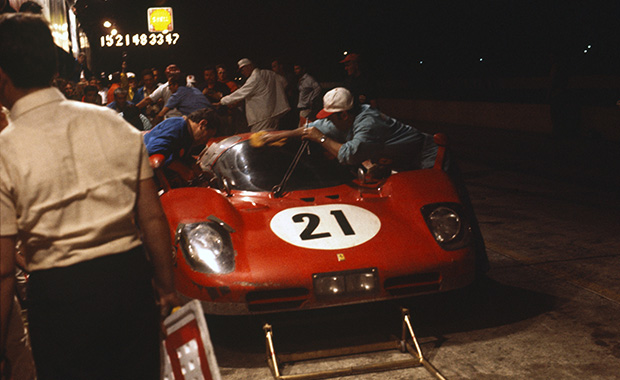 Andretti qualified his Ferrari on the pole and after an early battle with the other leading Ferraris and Porsche 917s, Mario and co-driver Arturo Merzario took control of the race. After 11 hours they enjoyed a massive 13-lap lead only to have their gearbox fail. Andretti was tired and deeply disappointed but Ferrari team manager Mauro Forghieri asked him to take over the remaining 512S, a closed coupé driven by Vaccarella and Giunti that was running third behind a pair of Porsches.

One of the Porsches was driven by Hollywood idol Steve McQueen who would star in the movie Le Mans that year and was a very competent amateur racer. McQueen was co-driving a 908 that weekend with Peter Revson but McQueen had broken his foot in a motorcycle accident. He was on crutches and wearing a cast so Revson did most of the driving at Sebring.

“The only reason I went into the other Ferrari was because I was tired of hearing the guy on the PA system talking about Steve McQueen,” Mario says. “That was all they talked about. It’s still ringing in my ears. Poor Peter Revson drove his ass off, and even at his best McQueen was well off Revson’s pace, but Revson wasn’t even mentioned.

“When Forghieri first asked me I was very lukewarm. The car was running third and I knew I wasn’t going to fit the car. I was ready to get out of there but this guy on the PA system was going on and on about McQueen and how he was going to win the race. I said, ‘To hell with it. I’m going to get in this thing.’” 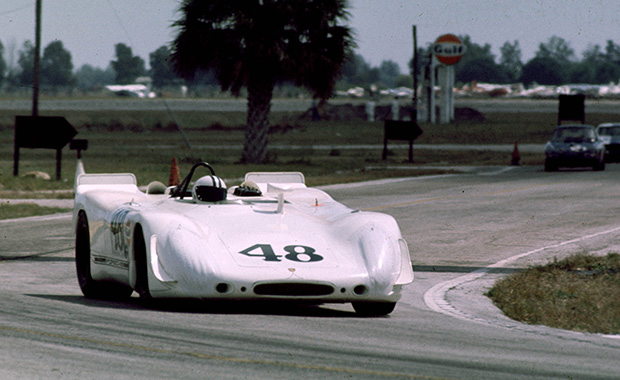 Vaccarella brought the third-placed Ferrari in for fuel with 45 minutes to go, and Andretti climbed aboard, intent on catching and beating the second-placed Revson/McQueen Porsche, if not the Pedro Rodríguez/Leo Kinnunen 917 which now led by a lap.

“I knew I had a shot at catching Revson, and I went for it,” Mario says. “I was driving like a man possessed. I was on a mission, I really was. I was lapping five or six seconds quicker than Vaccarella, and I was doing the kink past the pits flat, which I had never done with my car. I couldn’t reach the pedals very well, and I didn’t have the proper support in the seat for braking so I was sliding forward, but I hunted Revson down, passed him and pulled away.”

Just after Andretti passed Revson’s 908, Rodríguez’s leading 917 suddenly ground to a halt because of a broken wheel hub and Mario drove home to a victory he often refers to as the most satisfying of his long career. “It was a very satisfying race,” he says. “Mission accomplished there. I felt really good about that win.”

In 1971 Porsche won again at Sebring with a factory 917 driven by Vic Elford and Gérard Larrousse while Andretti scored his third win at Sebring in 1972 sharing a factory Ferrari 312P with Jacky Ickx. Andretti qualified the F1-based car on the pole and led the opening laps only to run into a series of problems. He and Ickx lost time with a cut tyre, a broken battery cable and an oil leak, but they were able to come back in style beating team-mates Tim Schenken and Ronnie Peterson. It was Andretti’s third win at Sebring in six years. 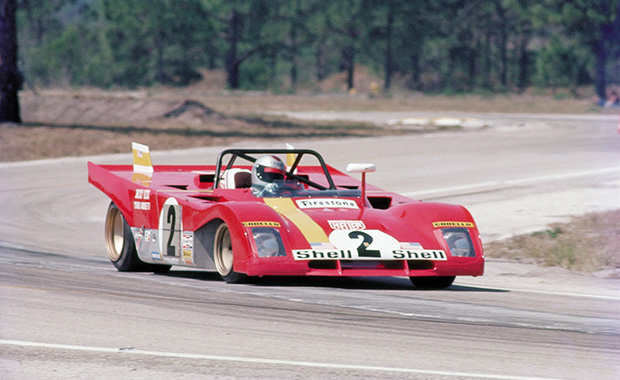 “I really enjoyed those races with Ickx,” Mario says. “Jacky was one of the best team-mates I ever had. He would let me qualify, which I loved to do, and physically, we were about the same size, other than his arms were longer than mine. I used to set-up the car to suit me, and he would never change a thing. He was a great team-mate.”

Of course, the great thing about Sebring is it’s just about the same today as it was in Andretti’s heyday. It may be a little tatty, if not crude, but the place resonates with the spirits of more than 60 years of motor racing. The USC may not be the WSC of old, or even the WEC of today, but Sebring is a special race. If you get the chance, be sure to go and soak it all in.