Aston Martin has put its Valkyrie Le Mans hypercar programme on hold, calling into question the future of the next-generation sports car formula.

The Valkyrie was meant to compete with Toyota’s new GR Super Sport hypercar in the World Endurance Championship from September, but will no longer be on the grid next season, which includes the 2021 Le Mans 24 Hours.

Aston blamed the “postponed development” on the announcement of a new LMDh prototype class, and said that it was considering building a different car, based on these regulations.

The LMDh standard enables manufacturers to build one car that’s eligible to compete for overall victory in the American IMSA series, as well as the European-centred WEC. 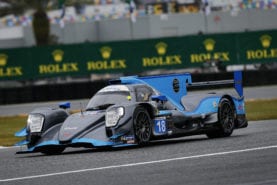 Hypercars cannot currently be raced in IMSA and are more expensive to develop than the LMP2-based LMDh cars.

However, the ACO, which promotes WEC, suggested that the decision was down to Aston Martin’s “economic difficulties” and said that the Le Mans hypercar category had a strong future.

“The Aston Martin Valkyrie hypercar will not make its WEC debut at Silverstone in August 2020 or compete in the 2021 24 Hours of Le Mans,” said Aston Martin in a statement.

“Aston Martin will now pause as it considers whether to continue in any future prototype class. Aston Martin remains open to working with both organisations to find a suitable pathway for any future participation.”

The company also confirmed that Formula 1 will “define” Aston Martin’s motor sport plans, along with endurance racing, following an investment by a group of investors led by Lawrence Stroll. 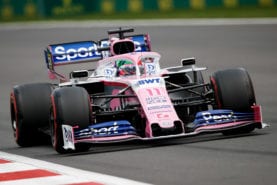 Racing Point will be rebranded Aston Martin from next year after co-owner Lawrence Stroll took a £182m stake in the carmaker. The team has said that it will be known…

From next season, the Racing Point F1 team will be renamed Aston Martin F1.

“Aston Martin’s ambition to compete for the overall victory in the 24 Hours of Le Mans remains undiminished, but it is only right that we reassess our position in light of a significant change in the landscape that was not anticipated when we committed last year,” said Andy Palmer, Aston Martin’s CEO.

“We entered Aston Martin Valkyrie in WEC and at Le Mans with the understanding that we would be competing with similar machinery and like-minded manufacturers. The situation has changed and it makes sense for us to pause and reconsider our options.”

Aston Martin’s announcement was swiftly followed by a statement from the World Endurance Championship, calling the decision “very regrettable”.

“[It was] perhaps not unexpected in light of the persistent rumours over the last six months concerning the fragility of the brand’s exposure in the rapidly evolving automotive market, together with its decision to enter Formula 1 as a works team in 2021,” said the WEC statement.

Pierre Fillon, president of the ACO, added: “For a few months now, we have all been aware of the economic difficulties of Aston Martin, and the subsequent questions raised about its future motorsport programmes.

“As far as the next top category of competition, Le Mans Hypercar, is concerned, we continue to believe and remain utterly convinced that a manufacturer has its rightful place there, in all its best interests.”

Toyota is committed to entering a hypercar from the next WEC season, which starts in September — the first in which they are eligible. Glickenhaus is due to join with its own hypercar later in the season.

Peugeot said that it will join in 2022 with its own hypercar, although the company may choose to develop an LMDh car instead.

GTE-class Aston Martin Vantages will continue to race in IMSA and WEC, while road-going versions of the Valkyrie will be delivered to customers in the second half of this year.

“The British sportscar manufacturer’s focus will be defined by its activities at the highest level of both single-seater competition and endurance GT racing, for which it has earned a rich pedigree over the past 15 years,” said the statement from Aston Martin.