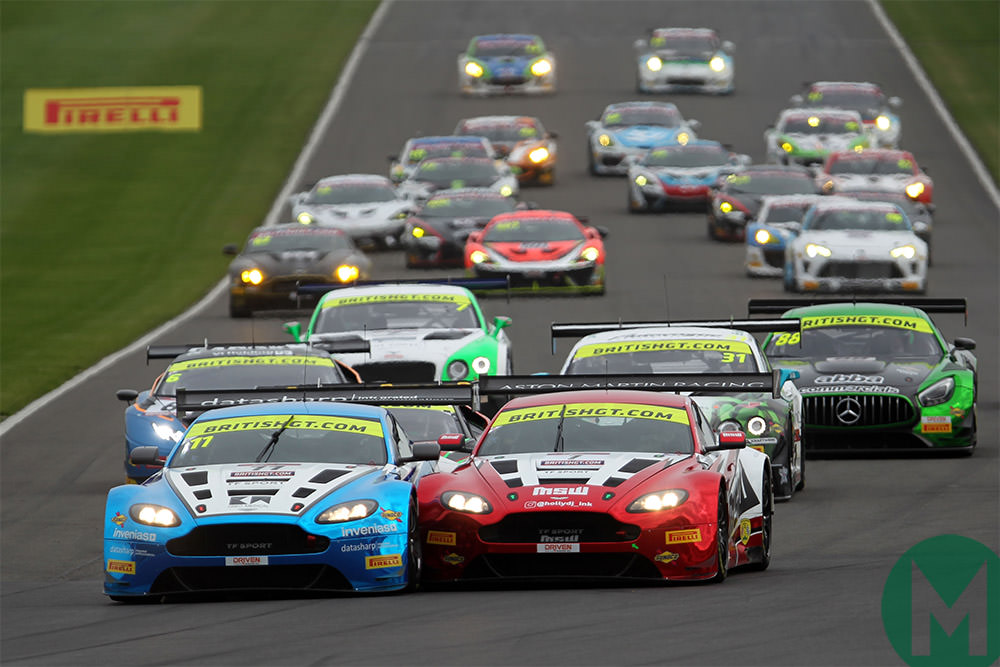 GT3 has all but died as a national platform. But British GT seems to have managed to skirt that particular minefield, as it confirms a capacity grid for 2018.

Naturally cars from the growing GT4 platform are filling more of the grid, but with 13 full-season GT3 cars there’s cause for optimism.

The standout is Aston Martin taking its Vantage GT3 on a farewell tour with almost full factory driver support. Nicki Thiim and Marco Sørensen, GTE world champions in 2016, are on the grid, joined by reigning Le Mans winners Jonny Adam and Darren Turner, and new boy Maxime Martin. It is an obvious and canny bit of marketing for Aston: this is the seventh and final Vantage GT3 season, and few would bet against it being a victorious sign-off.

‘Winning after seven years, imagine what you could do with a brand new car!’ will presumably go the sales blurb.

But it’s not just about Aston Martin. McLaren’s development driver Rob Bell is in the mix, so too Superleague Formula runner-up Yelmer Buurman in a Mercedes AMG GT3, Lamborghini Super Trofeo champion Patrick Kujala and the experienced and underrated Phil Keen both in Hurácans and rising stars Ryan Ratcliffe and Struan Moore also featuring. The latter is in Nissan’s full-season return, the former swapping in for Seb Morris in the championship-winning Bentley alongside Rick Parfitt Jr.

Races are often won and lost in the Am stints, but drivers such as Derek Johnston (team-mate to Sørensen), Andrew Howard (Turner), Jon Minshaw (Keen), Parfitt Jnr and Shaun Balfe (Bell) have the experience and speed to have blurred the lines between pro and am in the past few years.

That said, the pro stints are going to be box office. It’s a grid worthy of what is the last national GT3 series in Europe since France and Belgium disappeared down the GT4 route.

It’s a sigh of relief for GT fans. And there are many of those. That SRO, the organisation that runs British GT and gave birth to the category, has been working so hard behind the scenes to ensure GT3 survives in the UK should be applauded. Its comments in recent years that GT3 does have a future here were often met with cynicism, but this could be a marquee year of quality over quantity.

Is there fortune in Aston’s ramped up involvement? Probably, but SRO has a history of capitalising and making the best of things. This could well be another example of exactly that happening again. Time will tell, but probably not for another 12 months when the Aston campaign has shaken out.

British GT’s GT4 field is a strong support package, too. It’s often overlooked by casual observers, focusing more on what’s just gone through ahead, but it regularly produces some superb entertainment.

The entry-level category is no longer the domain of Ginetta, either; such has been the wider manufacturer interest that there are eight different marques accounted for. Even Jaguar is involved, entering a first factory-produced race car for decades. The story behind the project is even better, as Andrew Frankel told on these pages recently, with injured servicemen running the squad.

McLaren proved a difficult beast to beat for parts of 2017, and that’s been reflected in five being listed in the record-breaking 23-car GT4 field. The most of any manufacturer.

Just four Ginettas are to be fielded as bigger players have seemingly begun to take over, but Ginetta has bigger things on its mind.

Missing from the grid, as yet, is the Porsche Cayman GT4. It’s proved a tricky proposition in recent years, as having been one of the early adopters to the category it’s found life difficult against the developed johnny-come-latelys. Scott Malvern and Nick Jones have run a Cayman in recent years, but a decision is yet to be announced on what they’ll be in for 2018.

Ben Barnicoat’s return to the UK in the GT4 class is something of a surprise. He graduated from karting as something of a prodigy, winning Formula Renault NEC in his first full season in cars and later winning races in Euro F3. A switch to GT racing when funds ran scarce saw him inducted into McLaren’s academy, but the GT3 car was beset by problems. It seems he’ll be running parallel campaigns, but he can be expected to run well, so too his experienced team-mate Adam Balon.

The days of 30-strong GT3 fields are long gone for British GT, but thankfully Blancpain more than ably covers that off. So to call this another step towards the series’ heyday is a stretch but British GT is certainly holding its own in the last stand for national GT professional racing.