GT racing could get its first zero-emission series this season, but there are obstacles to clear yet 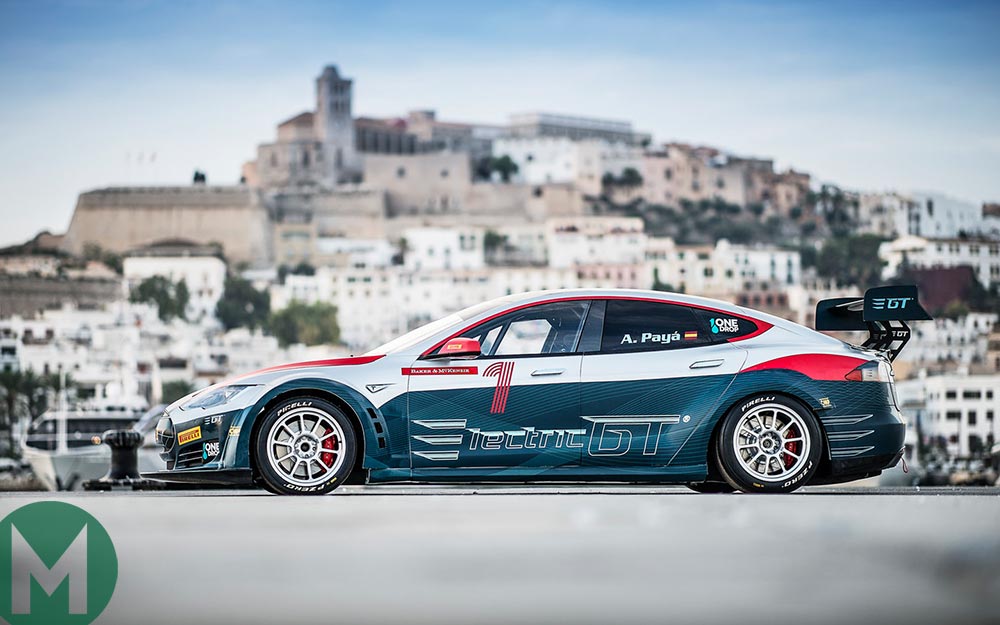 The next pulse of electric motor sport could be about to hit: Electric GT. Formula E has broken the ice, and through it comes a spec series based on the 778bhp P100D Model S Tesla.

It looks the part, and wouldn’t appear out of place in a line-up alongside Aston, Mercedes and Audi GT racers. The car hits 60mph in a little over two seconds, one second sooner than the Formula E cars do, and weighs a quarter less than the road-going Model S. Sticky Pirelli tyres and a low centre of gravity mean it shouldn’t be sluggish through corners, either.

In the wider sense, Electric GT might have a bigger importance. “Getting Tesla involved in motor sport would be a massive coup,” says Karun Chandhok. “That’s a key electric brand that Formula E hasn’t been able to attract.”

The Californian electric car pioneer has avoided the temptation of motor sport, where innovation and development is supposedly at its quickest. Not even Electric GT has a Tesla logo anywhere to be found – except on the car’s nose.

“Tesla has its hands full with a thousand other things,” Electric GT founder Mark Gemmill explains. “So one of their concerns was that it would distract from the job in hand.”

The implication is that Tesla is taking a wait-and-see approach: get on board if it takes off, with no damage done if it doesn’t.

Gemmill is a difficult man to pin down. Here and there busy meeting with prospective teams, drivers, and investors, our rearranged conversation racing against his plane taking off from Heathrow. Safety announcements pepper the background.

The electric series came together quickly, with timeliness playing a part. Gemmill is a businessman not a motor racing man, but he seems impassioned by the prospect. Those business ties have since been useful and opened doors in California.

“I have a friend who has a very strong background in motor sport and has been encouraged to change to electric. I thought the Tesla Model S was ideal and wasn’t being exposed on the race track at all. I’d had dealings with Tesla and asked how they would feel about it. The response was positive, so that was enough for me to think ‘let’s pursue it’.” 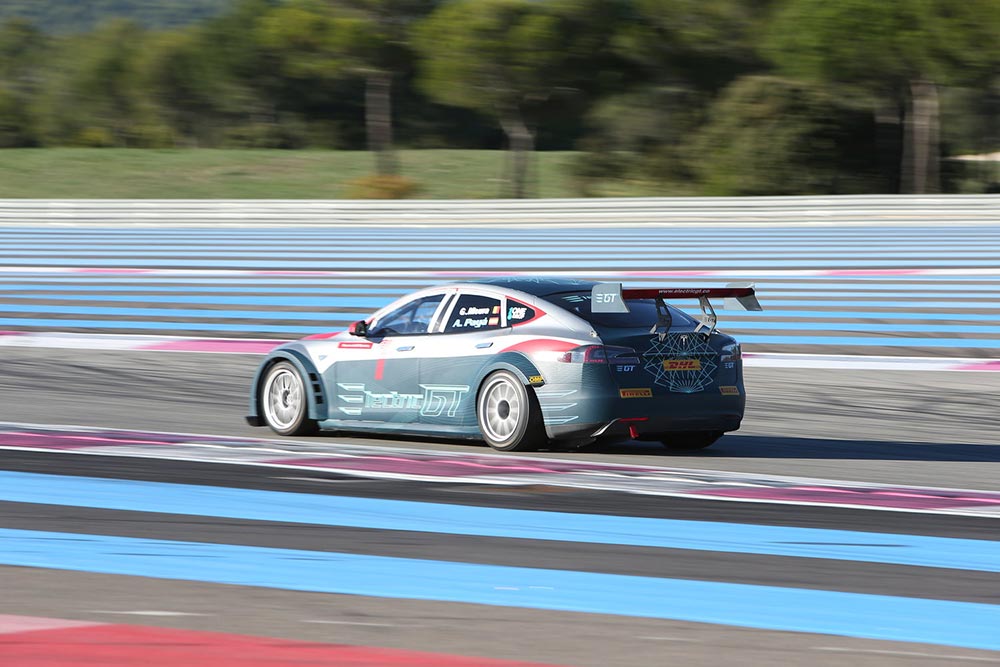 Things have moved on since but rarely in public. The calendar is speculative, the car isn’t yet at its final specification and teams yet to be signed.

Announcements on that front aren’t far off, he says, and the supposedly close official confirmation from the FIA should move things forward.

“We have interest expressed by 30 teams and have had several conversations. It’s progressing well, and we’re in the signing process with two of them and another two are just about to jump. It’s starting to happen.”

A ‘drivers’ club’ has changed the way drivers apply, too. But there are question marks over its purpose, just like Formula E’s on its launch, as Chandhok points out. “If you’re going to sell cars to teams, then surely they’re going to put the driver they want, whether that’s for financial reasons or driving ones? You can’t dictate who they want.”

Chandhok hasn’t joined, but some 700-800 drivers of varying abilities have tried. Stefan Wilson, Tom Coronel, Oliver Webb, Alex Premat and Tom Onslow-Cole all have and are in, so too Alice Powell.

“I’m not guaranteed a car. All I can do is wait and see,” she says. “It’s just an application form on the site, I saw Vicky Piria talking about it and tried my luck. They want it to be 50/50 male and female, Vicky and I and a few others have signed up.”

“There is a push to make that happen,” says Gemmill. “It’s tricky.”

The calendar is as yet unconfirmed, but Silverstone is expected to host its UK round, with events at Algarve, Misano, Barcelona, Paul Ricard and the Nürburgring.

Given the calendar that’s being mooted, FIA International Series status will need to be sought and that’s a lot of red tape to wade through before any season can begin. That FIA confirmation can’t come soon enough, and there was no mention in the most recent World Motor Sport Council meeting release.

The series’ weekend format is heading towards an electric-only festival. Electric GT will race twice, the only competitive track activity, with electric dragsters, bikes and rallycross demos filling the rest of the time.

Circuit reception has been positive, according to Gemmill. “The races will be half an hour, about 60kms. That’s not entirely due to batteries, they could last for longer, but we want it to be a snappy format. The longer race isn’t really what the public wants.

“The situation is surprising, the circuits know things are changing and are itching to get [electric] stuff on their circuits. It’s the right message to the local residents, the younger audience and projects the right image. The reception has been fantastic, circuits have been flexible on dates, and they know [electric racing] is a good thing.” 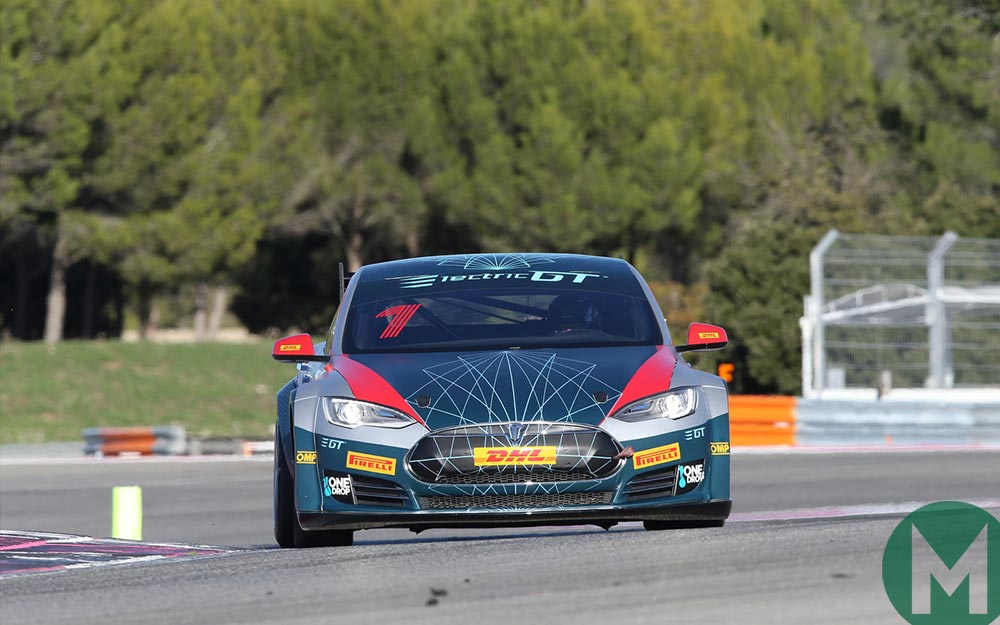 By either choice or circumstance, it’s looking to be a winter series. Silverstone, for example, is supposedly pencilled for mid-August and should be the season starter. The off-season approach is one Chandhok believes could work, but warns against Formula E’s worst-of-both current calendar.

“Formula E has got a lot right but not the calendar. It’s neither a summer series nor a winter series. They have these gaps, they went two and half months between Argentina and the previous one, then they slam them all in again. Maybe it needs a reset and just choose the period, have your 10 races with three-week gaps. Having the big breaks isn’t good and every series should be careful not to fall into that trap. I don’t think it matters whether it’s winter or summer, it just needs to keep momentum going. Every big gap loses that momentum.”

Using conventional circuits, unlike Formula E, the Electric GT season will need to be over by the end of November or have a long break until the European tracks reopen. It seems the series has plumped for the former, an August to November calendar to be confirmed.

Choice of circuit could also be key for performance and hitting that 60km distance mark, Chandhok believes. “One thing I learned with Formula E is undulations play a big part. It’s amazing how much energy gets used up. All of those factors need to be thought through. So circuits like Zolder, Snetterton, Assen maybe.”

Power is something the car does have, though. Powell spent a few laps in the car at an early taster day and was impressed. “The car is great, it has so much torque. It’s instant, your head is slammed back into the seat. It’s still in development, but the front end is great. It does take a bit to get the back end working, though.”

Chandhok, who’s driven Formula 1, Formula E and LMP machinery, expects – and wants – the car to get even better. “The chassis balance was really good, actually,” he says.

“If anything, the car felt over-gripped. They’re talking about having an extra 30 or 40 per cent power from what we tested, and therefore it will be a much more even balance in terms of power to grip. The grip in the low speed ­– I couldn’t believe how much front end it had – you just turned the wheel and the nose just turned it. You want it to be a little harder, really. You want it to be a bit more powerful and a bit harder to drive.”

The lack of noise will take some adjusting to, for fans and drivers, as the feedback given to Gemmill reveals. “The principle comment is there’s no noise. It’s eerie but they’re not complaining about that. They can hear what the car is doing.”

On that point Chandhok was the ideal person to elaborate. “You hear a lot of other things that you don’t think normally exists, like the gearbox rattling, the suspension; all these other bits that I’m sure you’d hear in everything else it’s just the engine noise masks it. I found it much weirder in the Formula E car for the first time when you just hear wind.”

While Chandhok isn’t in ‘the club’, he’d take up a seat if one came his way. “If there is a chance to be competitive, race with all cars equal, it’s single make; then it becomes a drivers’ championship. Of course I would be up for that.”

If it happens, that is.