A series taken from the 164-page Motor Sport special Great Racing Cars, which is available to buy here. 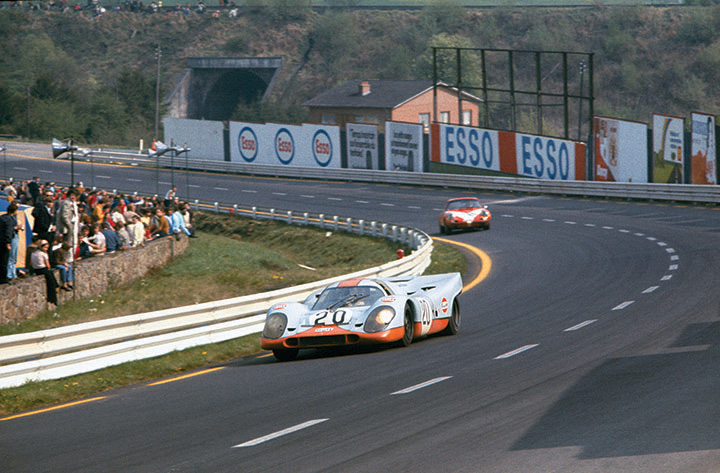 I can’t recall whether it felt better in long- or short-tail guise, but when the handling was sorted it was an unbelievable car. My victory at Le Mans apart, I recall leading my first race in a 917, at the Österreichring in 1970, but it ran out of fuel and failed to finish. We introduced ABS at the same track one year later, but that failed and Gérard Larrousse and I retired after an accident.

It wasn’t an easy car to set up and I never found it particularly easy to drive, with all that power. It was a bit of a monster, but perhaps that’s what we’re missing in modern Formula 1 at the moment – something to separate the men from the boys. 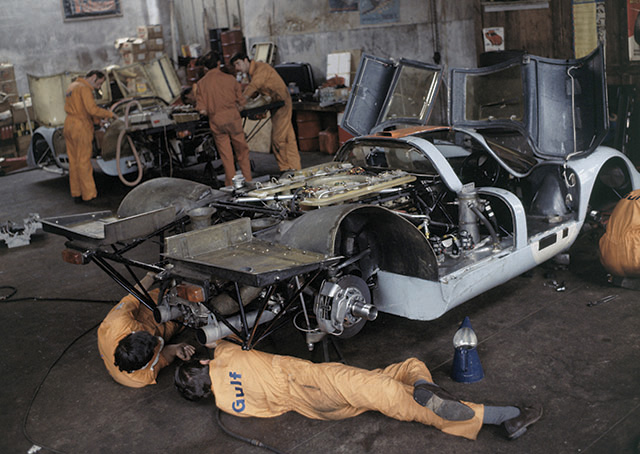 The Porsche 917 was born from regulations aimed to make sure such a car was never built. In 1967, alarmed by the expense of prototypes such as Ferrari’s P4, motor sport’s governing body the CSI decreed that from 1968 all prototypes would be limited to 3 litres. It was a rule you could only duck if you produced 50 examples, something no one building three or four highly specialised racers could countenance.

Fortunately for Porsche and marques such as Lola who stood no chance of manufacturing 50 of its T70s, the CSI cut the requirement to 25 examples. This would allow cars such as the Lola to race while restricting the big boys to a 3-litre limit.

At Porsche, Ferdinand Piech thought differently and presented a 917 plus 24 sets of parts for inspection. When this was rejected, he turned the parts into cars, ready for inspection in April 1969.

It was Piech’s masterpiece, a car created from an almost uniquely harmonious marriage of technical innovation and pragmatism. The result was a super-light racing car, with huge power and, ultimately, almost impregnable reliability. The lightness came not simply through the use of trick materials such as titanium and magnesium, but by pushing more mundane materials to unprecedented levels. The outer skin of the glass-fibre bodywork, for instance, is just 1.2mm thick and complete with the windscreen, perspex, seats, wings and even the wiring loom, weighs just 95kg.

The flat-12 engine, far from being a leap into the unknown, was based around technology Porsche had known for years. Each cylinder was fed by just two valves and the reason Porsche did not bother at first to use the full 5-litre allowance was simply that the engine was, at its heart, that of a 3-litre 908 with another four cylinders grafted on. Many components were common to both, the engines differing most in the method of power take-up which was from the end of the 908 and the middle of the 917 unit. This meant the 12-cylinder car could run with, in essence, two short and stiff crankshafts thereby allowing the engine to rev higher.

Take a 4.9-litre 917 from 1970 possessing a power-to-weight ratio of about 750bhp per tonne and compare it to the only car to offer opposition, the Ferrari 512S. That weighed 880kg and produced just 550bhp to give a power-to-weight ratio of just 625bhp per tonne. Looked at in such terms, the dominance of the 917 was not so much surprising as inevitable.

Taken from the February 1999 issue of Motor Sport. To read more click here. 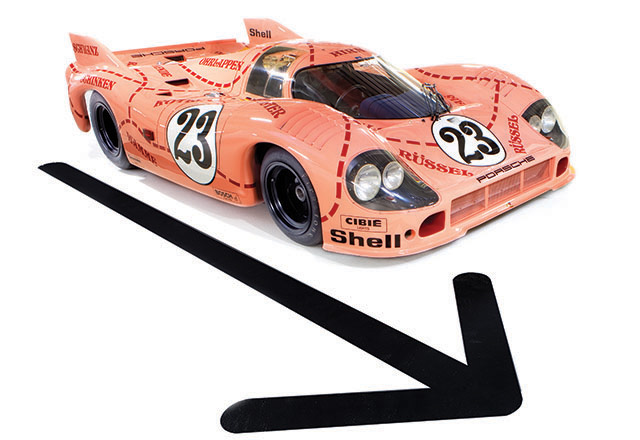 Pretty in Pink
The 917 took many forms during its racing life. Motor Sport took a closer look at one of the most famous – the so-called ‘Pink Pig’

It is not unusual for a racing driver to describe a racing car as a pig. It is rare, however, for a senior designer to declare that a racing car resembles a pig. And rarer still for the team to paint said car pink and carve it, like butchers, into cuts of meat outlined all over its bodywork. This is the strange saga that is the Porsche 917/20, which first appeared in public in the spring of 1971. And it’s not over yet. On sale now in Europe, from Porsche Design, is a money box in the shape of a Pink Pig. There is, if you prefer, something known as an ‘art ball chair’. It’s priced at a mere £2880, this being a piece of trendy pink furniture for the Porsche fanatic. Such is the legend of this racing car, only one of which was ever built.

The car was the result of Porsche’s relentless quest for ever more slippery aerodynamics, and it was aero specialist Robert Choulet of SERA (Société d’Études et de Réalisations Automobiles) in Paris who took on the task of creating a new body shape. The French company had previously worked on a new long-tail version of the 917, the Langheck, for the 1970 Le Mans 24 Hours.

Porsche’s target was to extract drag numbers similar to the 917L, and the downforce numbers of the 917K, without resorting to the long and weighty tail that had been introduced in search of ultimate speed on the Mulsanne Straight. The result was the Pig, though the ‘pink’ part came later. Choulet eventually presented Porsche with what was generally agreed to be an ugly racing car. The 917/20 had an unusually wide body, with strange lateral overhangs that were designed to lessen the effects of air flowing over the wheel arches. The short, stubby car was revealed to the world at the traditional Le Mans test in April, sponsored by Martini & Rossi and driven by Willi Kauhsen and Gijs van Lennep. But Count Rossi, dismayed by its ugliness, refused to let the car run in his famous colours. So, in a rare moment of not-very-German humour, it was decided to paint it pink and mark out the bodywork in cuts of meat as a butcher might have done with a real pig. Amusing, no? The car is now in Porsche’s ‘Rolling Museum’ in Stuttgart and is, unsurprisingly, the subject of much attention and discussion among visitors from all over the world.

Taken from the November 2011 issue of Motor Sport. To read more click here. 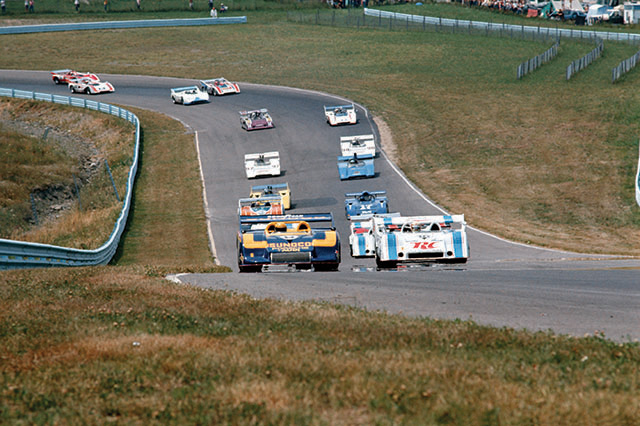 The 917/30 was a derivative of the 917/10 and it was the first real turbocharged racing car developed to compete in the Can-Am series.

McLaren had dominated for a number of years with big V8s and Porsche made the commitment to go forward with a full aerodynamic race car that had lots of downforce – and to use a turbocharged engine that would produce more than 1200 horsepower. The driver had a control knob that enabled him to add boost as he wished.

We went to Porsche’s test centre at Weissach in 1972 and at the time there were no buildings. They had just built the track and we ran the 917/10. I watched that car test for half a day and there was a tremendous amount of throttle lag. Porsche worked on that steadily to improve the lag with the evolution of turbos and wastegates. When we took the 917/30 to its first race at Mosport in 1973, we had a tremendously competitive piece of machinery and Mark Donohue went on to dominate that year’s Can-Am series.

We set a closed course world record with that car and Mark Donohue drove it to many victories and the Can-Am championship in 1973. The execution of that by Porsche, Donohue and our team was outstanding.