Last year there was hail, this year the heat scorched and the Nürburgring 24-hours was as unpredictable and punishing as ever. 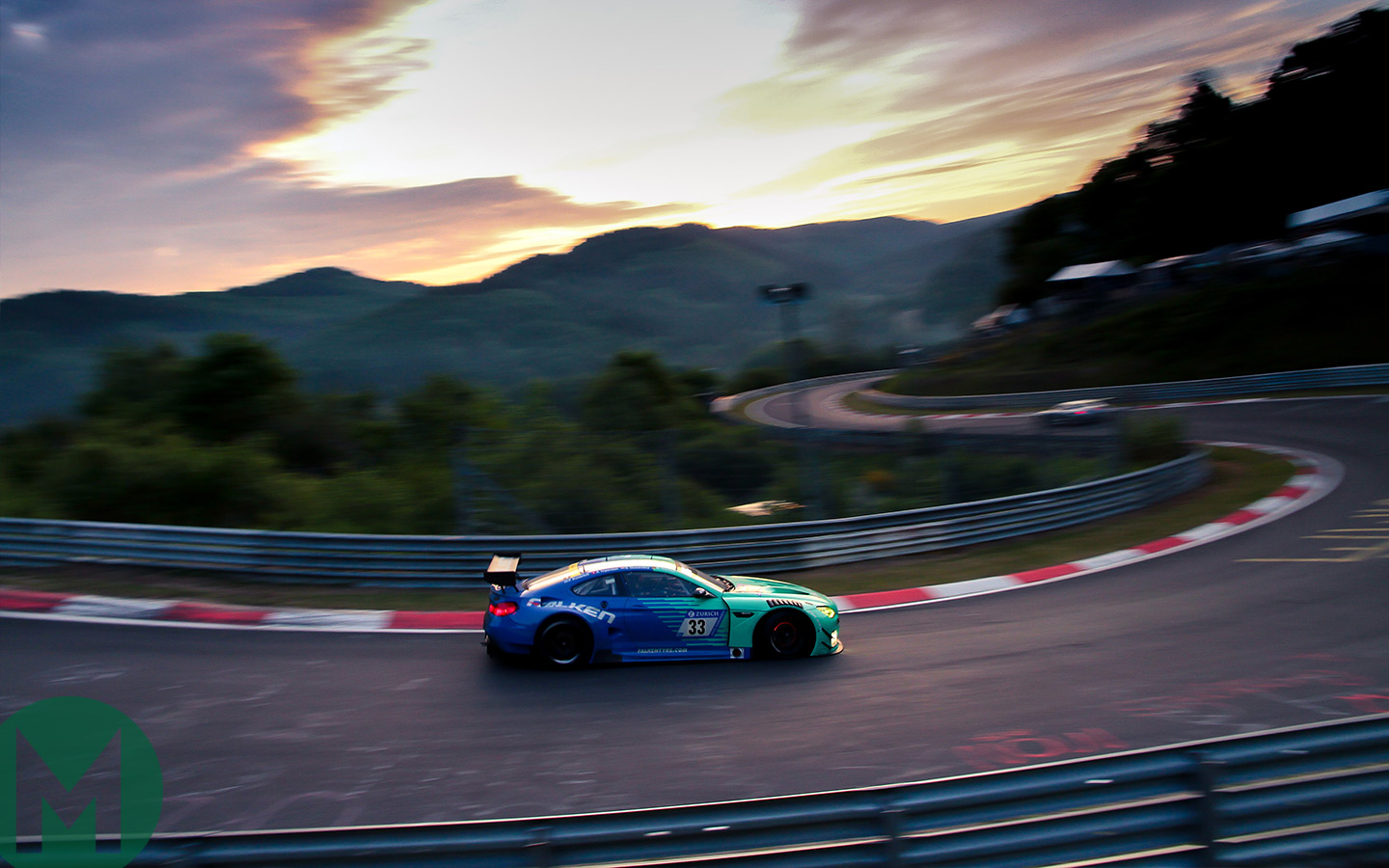 It couldn’t have been more of a contrast. As a 200,000-strong crowd roasted under a cloudless sky, the huge hailstorm that decimated the previous year’s race field now seemed a distant memory. Unseasonably hot weather and a final-hour downpour made this year’s Nürburgring 24 as big a test as ever for the nine tyre manufacturers who took part, with only eight more entries reaching the chequered flag this year than at the climax of last year’s maelstrom. It’s a fierce tyre battle every year: if you can survive the ‘Ring, your tyre can endure anywhere, but what does it take to win and just how tough is 24-hours of unrelenting, (almost) dry running?

“When you get no rain, it’s undoubtedly tougher on the cars and tyres,” Peter Dumbreck said, counting down the hours before the start of the race in the cool of the Falken hospitality lounge. With air conditioning fitted to his BMW M6 GT3, he was set to enjoy a comparably luxurious 24-hours, but the challenge of running in the heat did not escape him. “The rain throws up surprises and there’s more chance of making mistakes, but it’s a bit of a drama when you get consistently dry conditions. There’s the potential of heat soak when the car stops in the pitlane: as soon as you leave the pits, every alarm is going off and you’re thinking ‘is the car okay?’ You have to get running before it all cools down again, and of course we’re running a turbo with the BMW which makes matters worse.”

Fielding cars from two different manufacturers – a tried-and-tested Porsche 911 GT3 and a new BMW M6 GT3 – Falken Motorsport was taking on a new challenge in 2017, but the unexpected heat threw another curveball into the mix. With track temperatures not rising above 35oC in the early season, they approached the race with the performance of the heat-tolerant harder tyre somewhat of an unknown quantity. Nonetheless, preparations had gone smoother than last year. 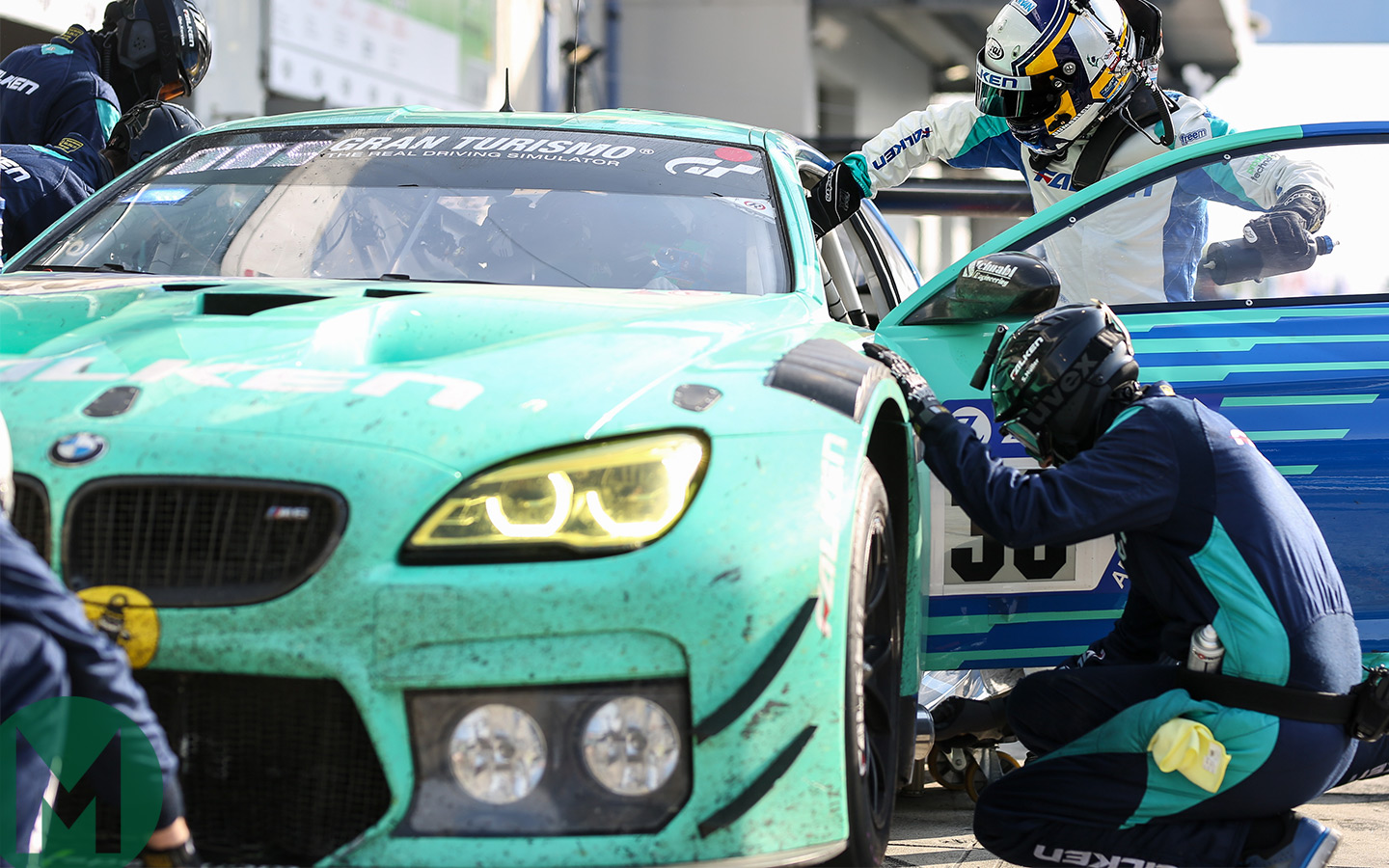 “This year we were a bit more lucky,” Falken Motorsport’s team principal Sven Schnabl said in an understatement. “Last year we had snow in the first race, rain in the second race and then we came to a point where we had to make a decision on tyres, but we had no clue what to do. This year we are a bit more advanced. We have a tyre that we know works on the BMW at the end of 2016, so we at least can do four hours in the car. Whatever tyres you have on, they have to last eight laps. It’s a big challenge for everybody.”

With tyre technology and competition a pivotal component of the competition, the decision to run two different cars with full-time Falken drivers was made to improve the quality of Falken’s race rubber. “It’s one of the reasons why we brought Peter [Dumbreck] and Alex [Imperatori] from the Porsche to the BMW, because they have knowledge of our tyres from the past,” Schnabl said. “Peter has the knowledge from the past 10 years, so he knows how the tyre has graduated from zero to hero, and they have experience of how to work with the Japanese engineers too.”

Although Falken showcases the quality of its race rubber every year at the 24-hours, Schnabl admits that customer tyre regulations make suppliers reluctant to bring new technologies to the race. “We are allowed to bring special tyres, but at the end of the day if one of our competitors buys our tyres we would give away technologies which we wouldn’t want to do and vice versa.” Schnabl explained. “Companies who do high-level motor sports like Michelin and Dunlop in LMP could bring different tyres, but they don’t want to give these technologies to anybody. We would say ‘Here’s 500 Euros, we want to have this tyre,’ and then we would take it apart, like they would do as well.” 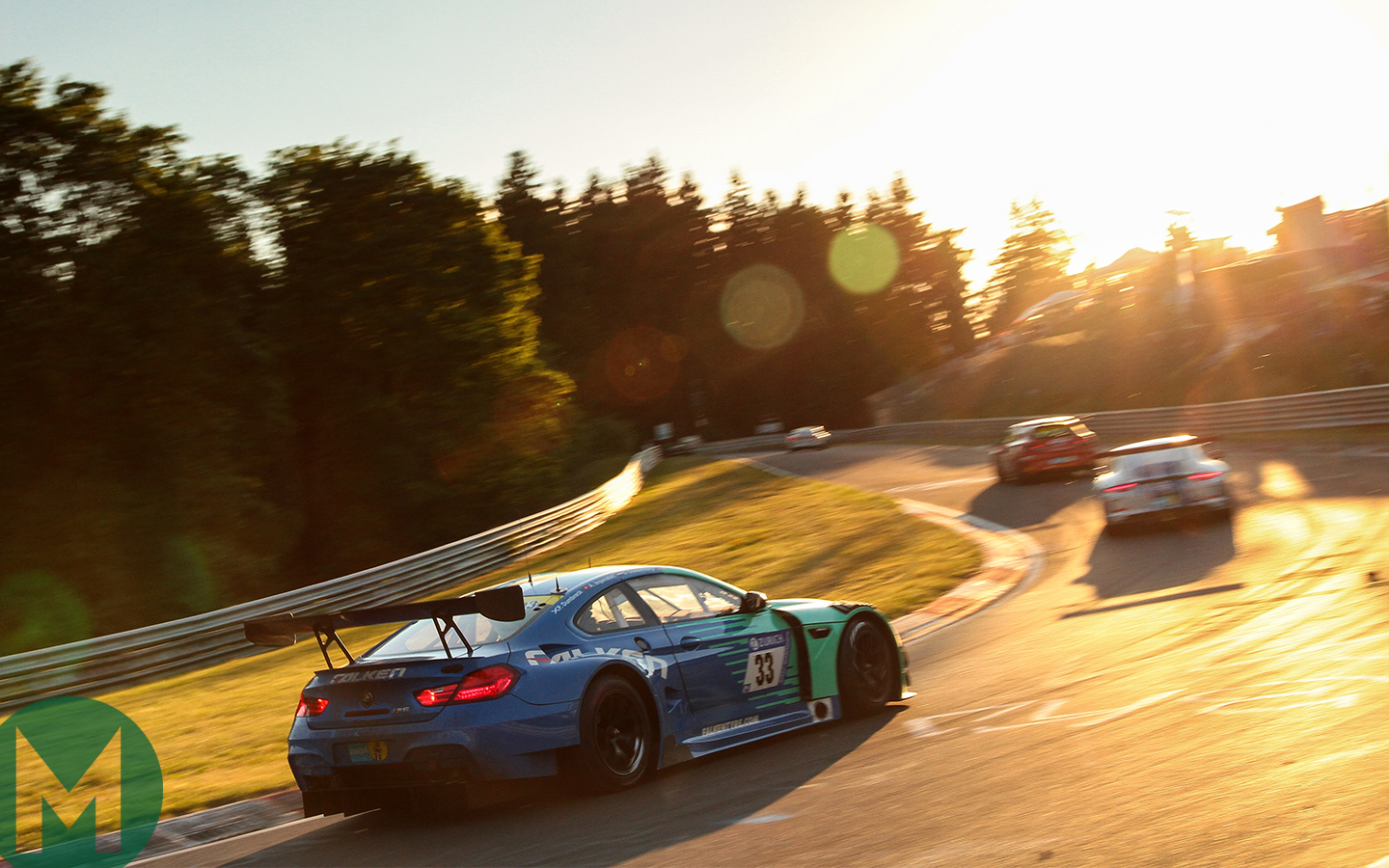 Despite the vast amount of tyre data that tyre suppliers take from races like the Nürburgring 24 to improve road and race products, it’s a slow evolution. “It might seem like you’ve got a long time – the best part of five months [over the winter] – but that actually isn’t very long,” Dumbreck explained. “Every test you do and every race you do, information has got to be fed back to Japan. Then you’ve got to do another production run of tyres and those tyres take a month to come or more, so you’ve only got so many bites of the cherry before you’re on the 24-hour race and you’ve got what tyres you’ve got.”

In classic Nürburgring style, a downpour shook the order of the 2017 race after 23-hours of hot and dry running. Strategists scrambled into action and a late pit-stop drama and a gamble on wets ultimately decided the race victory in favour of Audi Sport Team Land. Equally pivotal was balance of performance, a key and controversial concept which Falken has attempted to get a grip of in 2017 by fielding its two different cars. Whilst its BMW was burdened with 10 kilos of ballast and a turbo boost cut, its Porsche granted a small increase in restrictor size so the strategy did pay off, but fielding two conceptually different cars brought challenges. “One car has a rear engine whereas one has a front engine; one has a 50 percent weight distribution and one has 35/65,” Schnabl explained. “Then we have to make sure we don’t give any data from BMW to Porsche and vice versa.”

Having raced Falken’s Porsche for a number of years, Dumbreck requested to race the M6 for a new driving challenge. Given the penalties burdened on the BMW, did the organisers get the balance of performance right?

“Of course I’m going to say no,” the Scot said definitively. His car’s talented line-up qualified 27th in top-30 qualifying, so it was easy to share his conviction. “In today’s day and age of motor sport, people have to be clever with what they do and when they do it. There’s always a chance that you might get a break, or if you push too hard you might get screwed down and get a smaller restrictor or carry more weight. I do think we’re hampered in the BMW – the highest BMW is 10th on the grid now and all of a sudden Audi has come to the fore, Glickenhaus has come up, the only Ferrari looks strong and all of a sudden you’re thinking ‘Okay, they’ve played a real good game with the BOP’. It is what is it; you just have to race.”

A tenacious performance delivered Falken and Dumbreck an eighth place finish in the race. Both Falken cars had challenged for the podium at different stages, but the ebb and flow of the 24-hour marathon ultimately swung against them. And despite the heat, it was in many ways a classic Nürburgring 24: unpredictable, unrelenting and, come rain or shine, as tough and punishing as it gets.