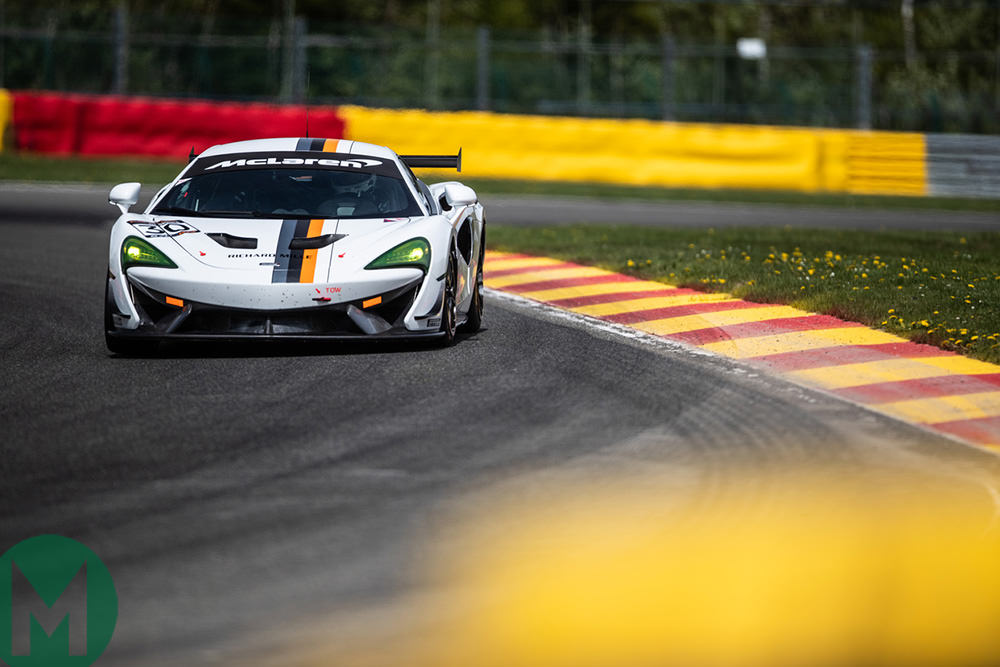 Two weekends ago I did something I almost never, ever do: I raced a modern car. When an invitation appears asking you to drive a McLaren 570S GT4 at Spa in the first and second rounds of the first ever McLaren one-make race series, it’s not something you turn down.

As someone used to racing old sheds on a diet of Haribo and Red Bull the set-up was extraordinary and I might indeed bore you with the details at another time. For now, however, you need know only that I was not just given a McLaren to play with, but the services of one Benny Simonsen, brother of the late Allan Simonsen and a man among whose many achievements count victory in the Spa 24 Hours. Every driver on the grid got their own personal coach for the weekend and Benny was mine. As if that were not enough, McLaren also laid on Bruno Senna for anyone in need of a second opinion.

So in first practice Benny asked me to go out, do a few laps and once I felt comfortable, go as fast as I safely could. As a man used to Dunlop L-section historic race tyres and cars with all the aerodynamic properties of a sack of spuds, it took a little time to dial into this world of slicks and downforce, but while I don’t compete in many modern race cars I’ve driven plenty, so within four of five laps I felt happy to push. And I did, as hard as I safely could, just as the man had suggested. And when the lap time popped up on the screen I was pleased: 2min 40.1sec seemed rapid to me, quicker even than the pole time set by a Ford GT40 for the Spa Six Hours and fully 30 seconds quicker than I usually chunter around here in the old Ford Falcon in which I’ve done the Six Hours for more years than I care to count. After all the 570S is far heavier than either of the old Fords – over 1400kg in fact – while Balance of Performance regs peg its engine back to from 570bhp to around 430bhp, far less than the motors in the Fords.

“OK,” said Benny, not quite as beside himself with admiration for my talents as I’d hoped, “let’s get the data and overlay a lap I did earlier.” Data. This was new to me. Like all modern race cars, the 570S records every detail of every action, throttle position, brake pressure, steering angle and so on and on and on. Moreover ‘my’ 570S had in-car cameras too so we could also see how I positioned the car on the road. And when I saw Benny’s lap time I could scarcely believe it: he’d done 2min 33.9sec. In a car I thought I’d learned, on a track I thought I knew, I was 6.2 seconds per lap slower than my pro driver. And the fact it was quite a long lap was of no consolation at all. I was nowhere, hopelessly, absurdly off the pace, unable to see where any of the time had gone. And then I looked at the screen showing the times of my fellow competitors – and I was four to five seconds of their pace too. Truly, I wanted to go home. I knew I wasn’t going to win, not when those setting the pace had spent many hours and weekends honing their skills in their own 570S GT4s, but I didn’t imagine I’d be coming last. Not until now at least.

“Why aren’t you braking?” It was a strange question given how hard I’d been stamping on the McLaren’s left pedal, but worthy of further investigation. “Look here,” said Benny, ‘at the end of the Kemmel Straight I am braking four times harder than you…” I couldn’t believe it. Used to old cars with rubbish brakes I’d been barely caressing the pedal relative to what was required.

Then Benny conducted what can only be described as an autopsy on my lap, in the most forensic detail imaginable, taking tiny sections of track – sometimes just the entry phase to one corner – and blowing up the data so it filled the entire screen. Turns out I was doing everything wrong: over-driving the car on the throttle, under-driving it on the brakes. My lines were awful. I was sliding it because that’s how the race cars I drive need to be driven and wrecking the tyres. The only slight comfort was I was losing most time in the slowest corners because, as Benny pointed out, you spend more time in them. But through the fastest parts of the track – Eau Rouge, Pouhon and Blanchimont, I was at least there or thereabouts.

It was far too much to take in but I went out again, braked as hard as my thigh would allow, focussed on trying to get better lines through the slower corners and, in an instant I was three seconds a lap quicker. I even got a ‘good job’ from Benny.

“Now let’s see what the others are doing, we might be able to do something with the set-up,” said Benny. “How do we do that?” I asked, wondering what form of undercover espionage we were about to indulge in. “Easy, we all have access to everyone’s data.” So we pulled up the info from the quickest car and discovered that while I popped out of Eau Rouge at roughly the same speed, by the end of the straight it was going 6kmh quicker and was in sixth, not fifth gear. “I think we’ll take some wing off,” said Benny.

And so it went on. I’d do some laps, we’d examine the data, I’d learn some more, we’d fiddle with damper settings, wing angles, tyre pressures and so on. I did my best to be a good student while Benny worked relentlessly on the data and with infinite patience to make me faster. Sometimes Bruno would be there too. Staggeringly, it worked. For the first race the following day I lined up not last, but fifth out of a dozen cars. Then I got a decent start and within a lap was second where I stayed to the end of the race. And at some stage I did a lap in 2min 34.2sec, almost six seconds quicker than what I thought was the fastest I could go the day before. And every tenth had come from the data and Benny’s ability to interpret it and show me where I was going wrong.

Now I’m not saying for a moment I was revealed as a driving god that day. Yes, I got to within 0.3sec of a long lap of my pro driver and I’ll be proud of that for a while, but that third of a second is still a chunk of time in racing terms and even with all the data, I don’t know how I’d find that. And remember Benny’s lap was just a benchmark – I have no doubt at all he could have gone faster still.

All of which has left me with rather mixed feelings about the use of data. On the one hand I now have a little silver trophy on the shelf whereas, without it, there is no question I’d have come last. But everyone had data, so I think we can call that a fair result achieved on an even playing field. But what data also does is unfairly discriminate against good drivers, drivers who instinctively know or can sense all that stuff idiots like me would never even notice. And while I benefitted from it hugely, the purist in me doesn’t really like it.

So I rang a mate who races regularly in the modern car world and he told me he spends more time with his head in the data than with his backside in the race car and that doesn’t strike me as being quite right either. But it is what is required to be competitive in modern motor racing. And I guess what would happen if you banned it is that the quick would get no quicker while the slow would get much slower, and less interesting racing would result. On balance then, I guess I’m in favour of it, not least because it turned a weekend that at one stage I wanted to forget into one I’ll remember for the rest of my life.