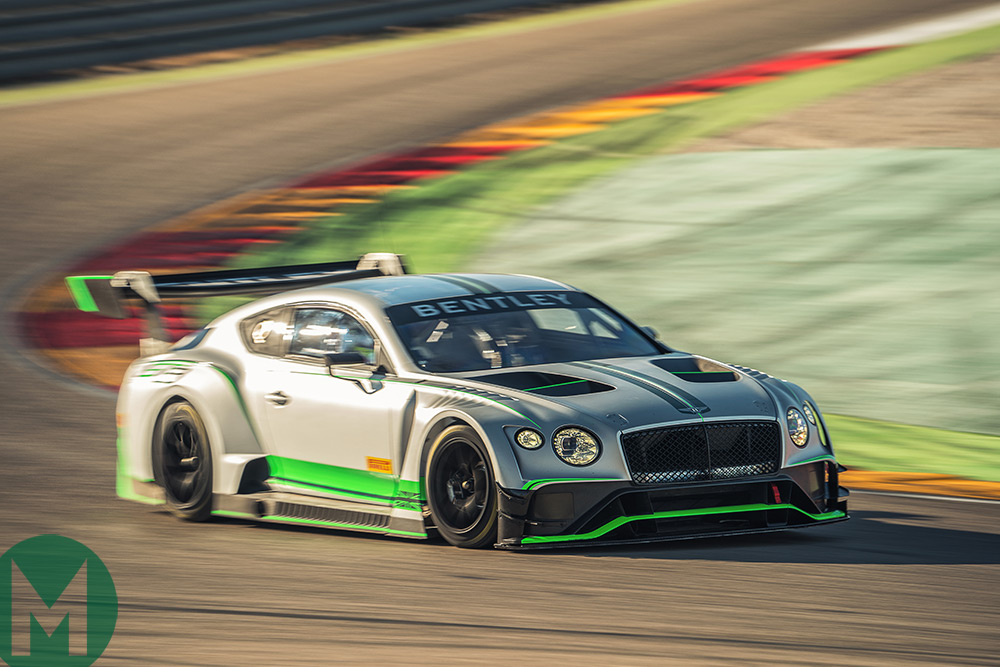 Bentley is taking a step back to move its new Continental GT3 race car forward. In its quest for evolution, the manufacturer has literally shifted everything backwards in an attempt to make the car an even stronger on-track proposition.

It’s certainly building on a strong foundation. The outgoing GT3 racer, 27 of which have been in competition since 2014, entered 528 races, collecting 120 podiums, 45 wins and four championships in three seasons.

Its final year, 2017, was “the most successful season to date for our programme,” according to director of motor sport Brian Gush.

Into 2018, with other manufacturers increasingly distracted by building ‘budget’ GT cars to field in the burgeoning GT4 class, Bentley has the benefit of focus: everything it does revolves around GT3.

That focus is only getting sharper in 2018, with Bentley contesting just the Blancpain Endurance Series – forgoing its Sprint counterpart – but with the Intercontinental GT Series (Bathurst, Spa, Laguna Seca, Suzuka enduros) added. There’ll be customer entrants in the Pirelli World Challenge in America and Blancpain GT Series Asia, too. 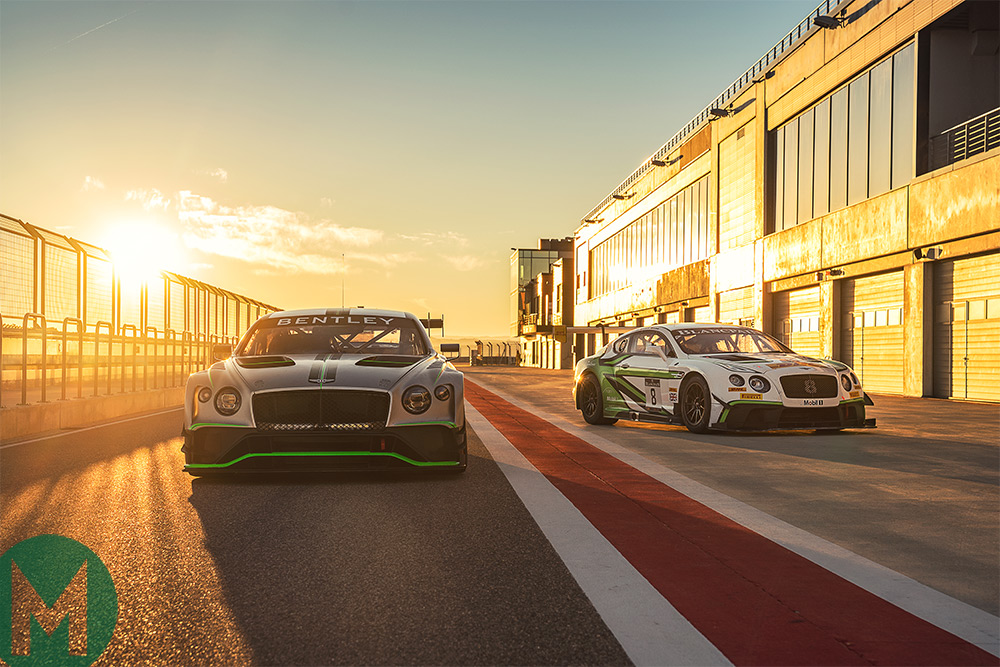 What was previously dubbed the ‘EXP 11’ is now simply known as the 2018 GT3, and it is an exercise in how an existing motor sport platform can be improved upon to fight a new campaign.

This is where that ‘step backwards’, the most significant improvement to the GT3, is crucial.

“[Weight distribution] was one of the main problems with the 2014 car,” explains Gush.  “We were always at a disadvantage in the wet and low-speed corners. Turning in was hard. We had to increase the traction, and the key element was to improve the weight distribution – to be close to 50:50 – and I’m quite pleased with the new car.  We’re pretty much there, which is impressive with a big front-engined car.

“The engine has been moved back a fair bit, as with the new road car the front wheel is further forward. That’s a key point of the new GT3 race car. The front overhang is shorter, and the driver is further back.”

“Before, the fuel tank was hindered by the gearbox but now we have a lot more space for the fuel tank, so it’s much longer and flatter, and a bit back, as is the oil tank,” adds Gush.

The driver sits further back by a full 300mm, in a fixed seat. It’s the pedal box and steering column that move, as the FIA’s new requirement to include interior driver nets comes into play.

The result is a targeted shift in weight distribution to 50:50, with more of the weight towards the rear, and a lower centre of gravity. That’s an improvement on the last iteration, which had a front-biased 52:48 distribution.

Using Porsche’s wind tunnel at Weissach, with the door firmly closed to keep out any curious engineers belonging to rival teams, Bentley worked on moving the aero balance forwards, targeting removing understeer with more downforce on the front-end. 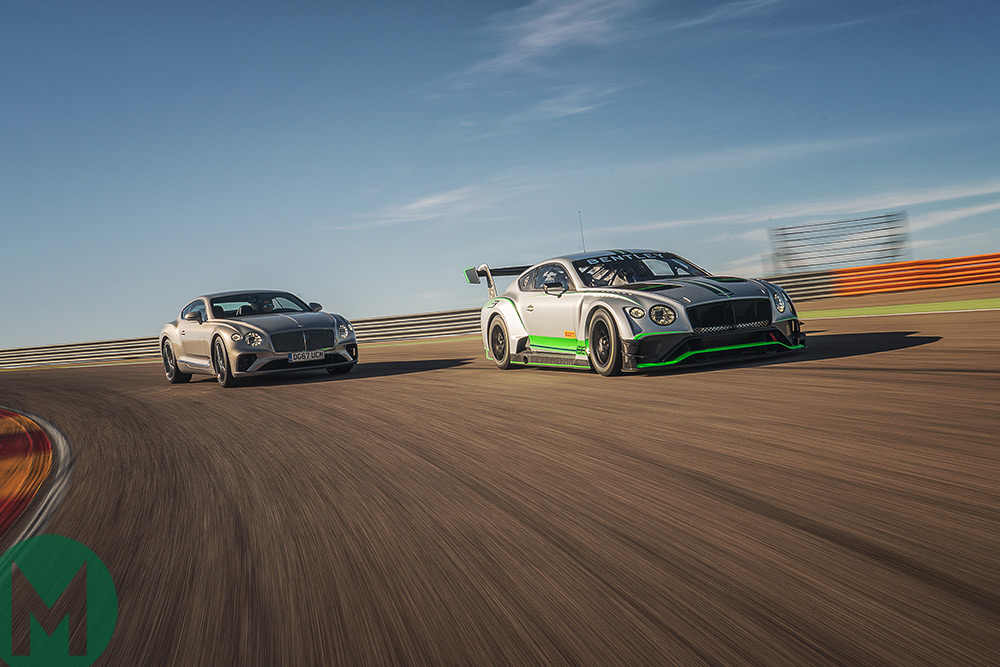 “It’s understeer at low-speed corners that we needed to tackle,” says chief engineer Christian Loriaux. “The outgoing GT3 lacked traction coming out of hairpins and in the wet, and we had quite a soft platform, which some drivers didn’t like. They’re used to a stiffer platform, so we focused on the antis: anti-dive, anti-lift and anti-roll.

“The new car is further back, lower down, and with a more forward-focused aero centre, essentially.”

A new blade behind the front wheel, a massive buttress and imposing rear diffuser means the Bentley is a more aggressive prospect, while retaining the DNA of its road-going variant.

The interior has been crafted with input from the road team, and the exterior retains the identity of the new for the most part – huge rear wing and vents notwithstanding. The race variant sits on BBS wheels (replacing the 2014 model’s OZ alloys), however, weighing just 9kg at the front and 9.5kg at the back.

Crash tests were also undertaken using the same computer simulations created by the road car factory. Further safety improvements have been made with a removable roof hatch (a mandatory inclusion), windows and doors that can be removed from the outside.

Significantly, the steel, aluminium and carbon body now has a removable front structure, making repairs easy for any customer teams that get into a scrap out on track.

“Crash-testing simulations are getting so good that you only have to do one test now to prove that the car is adequate,” says Gush. “And all that technology is available from our road car colleagues.” 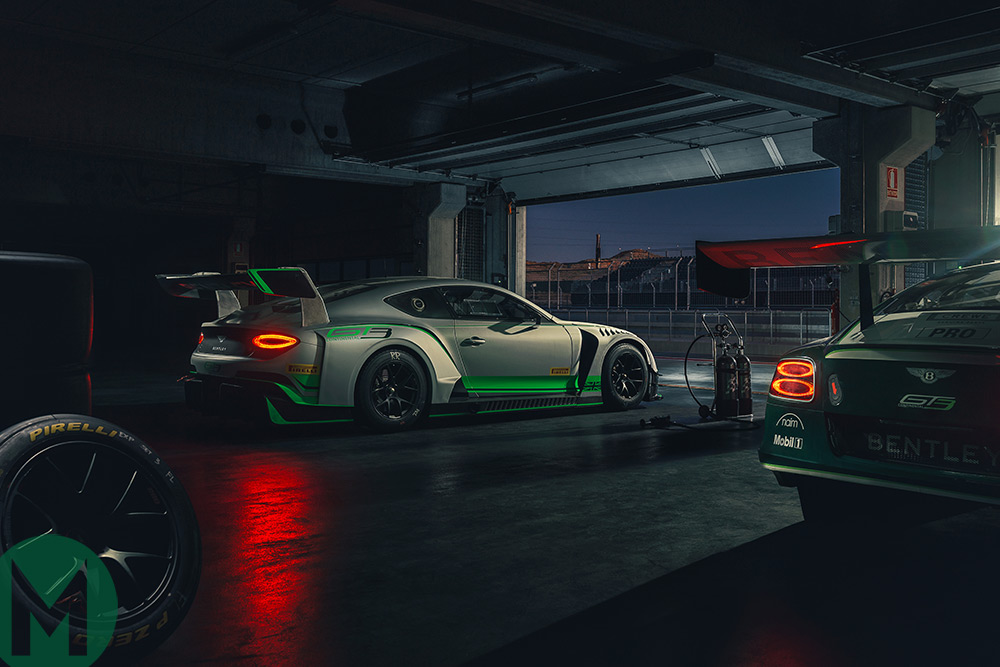 The end result is a package that will take on all 11 races of the Pirelli World Challenge from March to October and July’s Spa 24 Hours, as well as the aforementioned Blancpain and IGTC series. An entry into the Nürburgring 24 Hours was hinted at, with the mandatory front-wheel vents included on the testing car, though they were filled in. Concept images of a Nürburgring-spec GT3, with a shorter rear-wing and increased ride height, also teased at a Nürburgring entry – the engineers maintained the Spa 24 Hours is the priority.

Bentley’s works drivers line-up has also been updated for 2018, with 22-year-old Frenchman Jules Gounon on board alongside veterans Guy Smith and Steven Kane. They’re optimistic after testing was conducted at Aragon late in 2017; the car that Bentley showed off at its factory in Crewe was very much track-worn and slightly bruised to boot.

How far forward will the step be? Only time will tell.