Yes, significant changes to the circuit were made immediately afterwards and attitudes towards safety have changed out of all recognition since – but, still, 40 years.

And it’s only been beaten once more since 2010.

The car that set it back in 1971 was far from being the fastest Porsche 917 that day. It did, however, hold a secret advantage.

“Nobody knew anything about the chassis,” says Gijs van Lennep of the be-finned short-tail run by Martini Racing (to all intents and purposes a works team), and which he shared in victory with Dr Helmut Marko. “Even we only heard about it after the race.”

Magnesium-alloy tubing: lighter and stiffer than the aluminium norm, but a gamble all the same.

"With five hours to go our brake discs began cracking. So we decided not to brake anymore – or to do less of it at least."

“The first chassis they made broke after a couple of hours of testing at [Porsche development centre] Weissach,” says van Lennep. “That second chassis they drove, I think, for 10 or 12 hours. It was difficult welding at the joints, so they had put a sort of sleeve over it and welded on that. The third was ours.”

“So we had the lightest. The saving was about 40kg. The last story I heard from Stuttgart a few years ago was that we had a bigger oil tank [in order] to meet the minimum weight. More oil, yes, but, of course, right in the centre of the car, and so good for the handling.”

This option was not offered to the Gulf-backed sister squad – officially a works team but feeling increasingly ‘privateer’ – but likely it would have refused it. For team manager John ‘Death Ray’ Wyer was in the business of winning rather than innovation.

Indeed, given a choice he wouldn’t have run the long-tailed version of the 917 either. He didn’t think it truly race-ready. But team driver Jackie Oliver had denied him that by being stunningly fast in one at the official Le Mans Test: 3min 13.6sec – the first 250km/h lap. 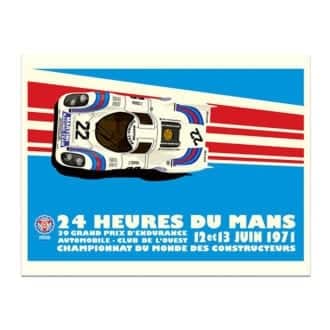 Oliver would be clocked at 246mph – almost 400km/h – on the Mulsanne Straight during the race itself.

“It’s easy,” he says nonchalantly. “When you’re confident and leading everything starts to fall into place. At night, warm orange lights glowing on the dashboard and strong headlamps, the impression of speed isn’t there. You have done it many laps before – and even the Mulsanne Kink was flat in that car.

“What you do get at Le Mans is the speed differential. I have a picture of me passing somebody in a 911. He was doing 150mph and I was doing 250 and my bow wave has put him at a slight angle. That was the only time when you got an impression of speed.”

Bravery and skill aside, it’s clear that the Langheck had been tamed if not exactly reined-in: “Confidence is all right as long as you give it respect,” warns Oliver.

Richard Attwood had driven the wild-child version at Le Mans in 1969: “They’d tested it on an airstrip and, I think, never reached terminal velocity. Perhaps 190mph. Now we were doing 235 and discovering an extra element of badness. Down the straight your rear-view mirror increasingly filled with a rising tail. I can’t believe Vic [co-driver Elford] could have liked it.

“We had a big lead when we retired. I didn’t give a monkey’s. My life was still with me. Total relief.”

This chastening experience coloured his choices for the 1970 race: “I asked for a 4.5-litre short-tail and for Hans Herrmann to be my co-driver; the oldest, he didn’t want to die. But I’d read it wrong. We qualified way back and I told my wife that there was no way we were going to win.

“Yet there were so many driver errors that we were leading after 10 hours. Keeping it on the island for the next 14 was incredibly stressful. Huge downpours. Down to 60mph in places. Yet I don’t remember anyone overtaking us.

“They might have postponed it today. There wasn’t even a Pace Car back then.”

As a winning result, Attwood was content to find himself alongside Herbie Müller in the third Gulf 917 in 1971 – a short-tail entered by way of back-up and prepared at Wyer’s Slough base rather than in Stuttgart.

Sure enough, the team’s long-tails set the pace, with Oliver and co-driver Pedro Rodríguez – their car on pole at 3min 13.9sec and registering the race’s fastest lap – being generally ahead of the sister machine of Jo Siffert and Derek Bell.

Both crews, however, would suffer the same long delay: a failed rear wheel bearing caused, so the team reckoned, by tyre shrouds that reduced drag at the cost of increased temperatures.

Rodríguez would be running second even so when a hose burst, covering him in hot oil and cooking the engine.

At approximately the same time the third Gulf car pitted jammed in fifth gear. The team’s request that a left-hand thread be used on the synchro cones had been ignored. Instead they had been Loctite-d and peened over. Fully 37 minutes were lost to the repair.

“The winning car had exactly the same problem about an hour-and-a-half later but, of course, they knew exactly what to do by then,” says Attwood. “Buckets of cold water helped repair their car in about 25min, let’s say. We lost the race by about five.”

Van Lennep had had his 917 ‘moments’ at Le Mans, too, crashing in 1970 in a car ‘fixed’ after an accident for co-driver David Piper: “The steering was not straight and at 320km/h a tyre burst because it was too hot. That was the end of that one.

“You knew that it was a dangerous racing car because your feet were in front of the axle – and there wasn’t much else there. You didn’t want to hit anything. But I never had that [type of] accident so I can’t tell you about it.

“But 917 was fantastic. There were no big changes during my time; the biggest happened between 1969 and 1970. I loved it. But I was young. Lots of car control. The rear axle was welded up and you could steer on the throttle like a go-kart.

“You had to brake hard, exert a lot of pressure, and the steering was quite heavy. After 40 laps at the Norisring, say, you were knackered. But Le Mans had long straights and so was not as tiring. And there was a bump before the Kink so, even if you were asleep, you knew you had to steer right.

“My car was running beautifully in 1971. Though we were a little worried about the cooling fan: when it broke all its locating bolts it would fly off and that would end the engine.” Such a failure had sidelined Martini’s long-tail, which Elford was sharing with Gérard Larrousse. “So at every pit stop a mechanic changed one bolt. That way we didn’t lose any time and, after four pit stops, we had all new bolts.

“Then, with five hours to go our brake discs began cracking. That was the first time we had holes [drilled] in them and they were cracking around the outside. If we stopped to change them we couldn’t win. So we decided not to brake anymore – or to do less of it at least.

“At the finish I took the [drilled] ignition key out – and that was the end for that car. It’s in the museum now. You can’t drive it. Only push it. It’s too thin, too light. It had a gear knob made of balsawood.

“Whatever it took. We wanted to win.”