Taken from the July 1997 issue of Motor Sport

On and off, Mario Andretti has been trying to win Le Mans for more than 30 years. The place has hardly been kind to him, but he adores it. “I was always able to relax there,” he says. “I enjoy the whole event. And a Le Mans victory is something I really feel is missing from my CV.” 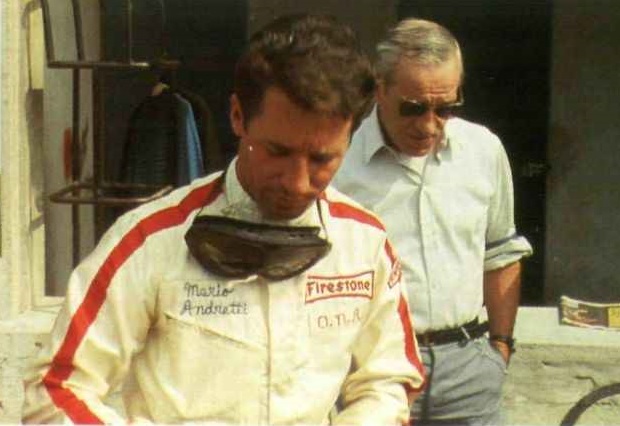 The most versatile driver of them all, Andretti has won the World Championship, the Indianapolis 500 and NASCAR’s Daytona 500. Being a man with a keen, if unfashionable, awareness of the sport’s heritage, he needs Le Mans to complete the set. At 57, he is back at the Sarthe again this month, sharing a Courage-Porsche with son Michael.

Andretti was second there only a couple of years ago, his best finish to date. That race apart, he feels his best shot at victory was back in June 1967.

“Man, that must have been about the greatest collection of race drivers ever assembled in one place,” he says. “It was the ultimate confrontation between Ford and Ferrari, but you also had the Chaparrals, the Lolas, the Porsches…”

On paper, the Ford squad, of which Andretti was a part, was favourite to win. Running a long distance version of its 7-litre NASCAR engine, the company entered no fewer than seven cars, ranged against a trio of factory 4-litre Ferrari P4s. “The Ford was like a truck, but the Ferrari is a thoroughbred,” commented Chris Amon, the only man who had driven both. That went down very well in Dearborn. 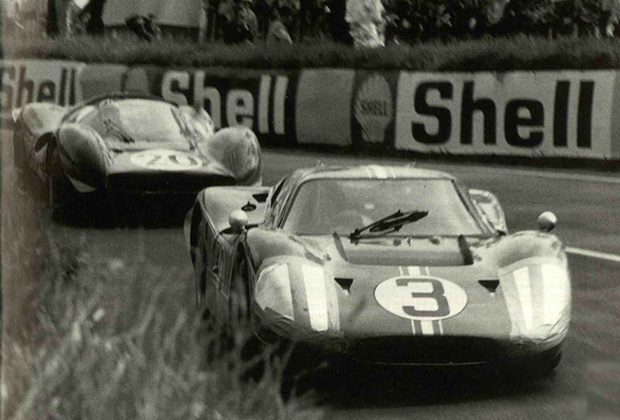 The year before, Amon, partnered by Bruce McLaren, had won Le Mans for Ford, so he knew all about the worth of a big lazy engine over a 24 hour grind; knew, too, that three litres were an awful lot to give away, truck or not. But he had his hopes. Earlier in the year, at the Daytona 24 Hours, he and Lorenzo Bandini had headed a Ferrari 1-2-3, and Ford, on home territory, were routed. That stung, and they threw everything into a steamroller assault on Le Mans, the budget for the race put at $6m, a colossal sum for the time.

It worked, too. From the beginning, the Fords muscled into a pace that Ferrari could not truly sustain, and only Phil Hill’s 7-litre Chaparral 2F was able briefly to threaten them. The MkIV of Dan Gurney and AJ Foyt took the lead in the second hour, and never lost it. Mike Parkes and Lodovico Scarfiotti finished second with their P4, and gallantly so, but on sheer cubic capacity they were outgunned.

Neither Amon nor Andretti was around at the finish, each departing the race in spectacular fashion. “In hindsight, what happened to me was quite funny,” Chris says. “After seven hours, we were running fourth, and then I got a puncture going into the Esses, so just beyond there I stopped and had a look. I was going to change the wheel, but as I raised Ferrari’s wonderful hammer, the head flew off! There was nothing for it but to set off very slowly down the Mulsanne Straight. I could hear something rubbing, and thought it was a tyre flapping; but what I didn’t realise was that the upright was scraping on the road. There were sparks from the magnesium and the whole lot went up. 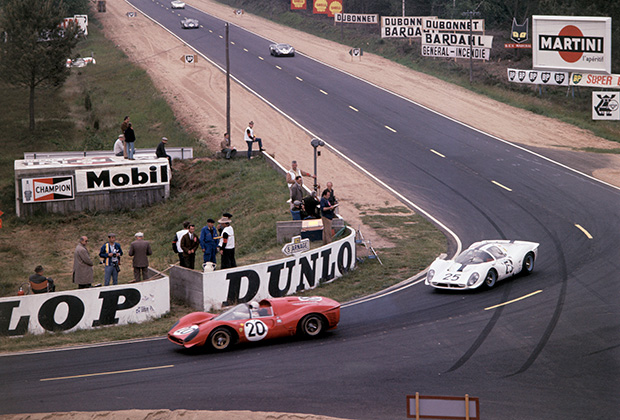 “At that point I abandoned ship, and hid behind some hay bales – I thought it was going to blow itself to pieces. By the time the marshals got there, it was an inferno, and when they’d put out it finally, they looked into the cockpit, and found no driver there! I shouted, and they nearly fell over; I guess they thought I’d been consumed by the flames…”

Andretti’s exit was still more dramatic. Sharing a MkIV with Lucien Bianchi, Mario was eager to get on terms with the Gumey/Foyt car, and at three in the morning was not far behind. “They were the only competition,” he remembers. “We’d gotten some way behind them, but then I had a stint in the wet, against Foyt, and it was a piece of cake, believe me. I know to this day he tells it like he won that race on his own, but I made up a whole lap on him, and then I gave the car to Bianchi.”

Mario pauses. “Lucien was, you know, a great guy, but so conservative. By now Gurney was in for Foyt again, and obviously quicker than Bianchi, but I figured, well, at least he’s got a cushion.

“Then he comes in, and he starts talking to the mechanics like it’s a lunch break! It was true we had a lot of vibration, because we had these beryllium discs that would crack, but not come apart. We’d tested them, and I said, ‘It’s OK, it’s normal.’ 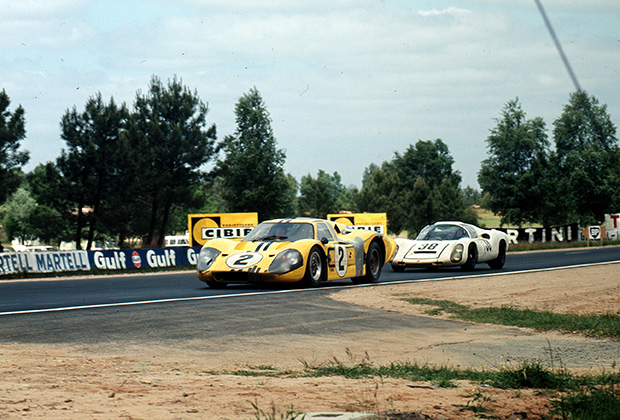 “So he goes out again, does two and then he’s back in, wanting them to change the pads. Well… while they’re doing that, I drag him out of the car, and get back in myself. We’re losing time, and now I’m pissed off.

“This mechanic changes the front pads and puts them in backwards. And the discs arc cracked. I come out of the pits, go over the rise, start my braking for the Esses – and it takes the wheel right out of my hands! The car had been refuelled – 80 gallons – and it was so heavy you couldn’t even lock the wheels. We just turned sharp right, straight into the bank. Big accident.

“I had a steel Heuer watch, and the impact broke the bracelet in three places. It also broke three of my ribs, and I was black and blue from the belts. How in hell that thing didn’t explode, I’ll never know – if someone had hit me, I’m sure it would have.”

Someone nearly did. I happened to be down there at the Esses that night, and the next few seconds were unforgettable. Andretti’s car was destroyed, everything forward of the windscreen gone, but somehow he got himself out, climbed the barrier, then collapsed. 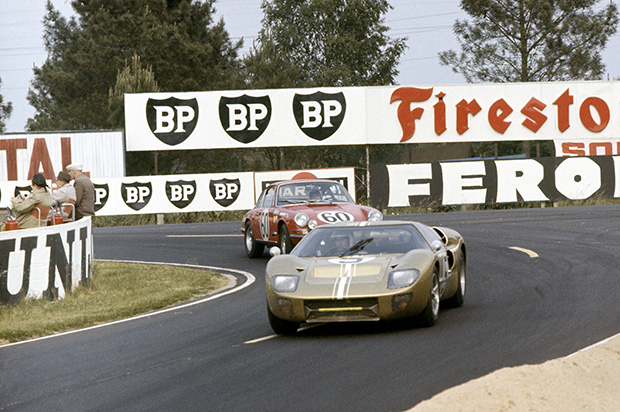 Before Le Mans’ eerie yellow ‘accident’ lights could begin flashing, another Ford was crashing. Roger McCluskey, one of the Indy stars drafted into the team for the weekend, made out the remains of Andretti’s car, surmised that Mario might still be inside, and deliberately spun into the barrier.

Nor was that the end of it. Jo Schlesser, in the Ford France entry, was next to arrive, aimed for the gap between the two wrecks, and found it narrower than his car. Within a few seconds, Henry’s armada had been trimmed by three, but only Andretti, fortunately, had suffered any injury.

“Ford had brought in this medical unit, and it had full facilities: they could do emergency surgery better than any of the local hospitals, and they told us, ‘If you have a problem, don’t let them take you to the hospital.’ I was lying just over the barrier, screaming in agony when they tried to move me. They got me to the ambulance, and I says, ‘No, I’m not getting in there.’ McCluskey says, ‘What do we do?’, and I says, ‘Get the keys from the ambulance, and throw them away.’ So he does that, pitches them into the woods. Bet they haven’t found them yet…

“Then Roger – who was a big guy – picks me up, puts me over his shoulder, and we cross the track. There was a marshal there, and he had a Peugeot with a trunk that came right down to the bumper. They put me in there, and that’s how I got to the Ford compound.” 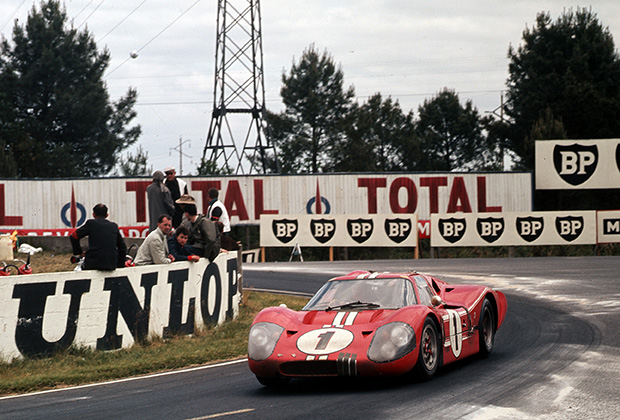 In the meantime, Gurney and Foyt sailed serenely on, the car running faultlessly. “The Ford that won was the one least likely to finish, in my opinion,” Amon smiles, “because you wouldn’t have put money on either Dan or AJ in a 24 hour race, and they kept up a phenomenal pace. Ferrari had reckoned it would take an average of 128mph to win, but the Ford averaged over 135.”

The following weekend Andretti had an IndyCar double-header. “Fortunately, the first one, at Mosport, was rained out, but we practised there, and someone blew up in front of me; I spun on his oil, and hit a goddamn bridge! Next day, we ran the Langhorne oval, and I finished third, but it was the only race in my life where I nearly gave up. That day I thought my whole side was falling out. Those ribs never did heal straight…”

Click here to listen to our podcast with Mario Andretti