After the euphoric highs of the Bentley project in 2003, British interest at the Le Mans 24 Hours suddenly became rather thin on the ground.

The Crewe manufacturer pulled out of the sport straight after topping the La Sarthe podium. There was no interest in a defence. In the minds of Bentley’s bigwigs, it was mission accomplished and point proven.

Aston Martin’s ultra-successful DBR9 GT1 was still a few years away, and all of the remaining British entrants – many of which were privateers – were busy running foreign machinery. Prodrive had its Ferrari 550LMs on the go. There was a brace of British Audis to cheer, but they were still Audis. There was a smattering of usually outclassed Lolas, and the MG-Lola programme was already some way past its best at La Sarthe.

And so it fell to a more unlikely source to provide the British underdog spirit: TVR.

The small, specialist manufacturer from Blackpool was eagerly taking on the big guns after the multi-year development programme of its GT2 challenger, the T400R. Its Le Mans journey had just begun as Bentley’s was ending.

The TVRs offered it all for endurance racing fans. The outlandish looks, the bright liveries, the rumbling straight-six. Few other cars on the entry at the time turned heads or tugged at the heart strings quite like the T400Rs. They represented the best efforts of a small band of brothers, standing shoulder-to-shoulder against much larger opponents: A smattering of Davids amid hordes of Goliaths.
But in truth it wasn’t all that surprising to see them there, considering TVR was well into its boom period at the time.

“Peter was truly special, a bit mad, a really wonderful megalomaniac who wasn’t scared to dig into his own pocket to make things happen”

The single-make Tuscan Challenge, which began in 1989, had grown to such an extent that it was then the UK’s de-facto single-make sportscar series. It was the fastest, most spectacular thing around during the late 1990s, and attracted some of the best drivers of the era, plus special guests such as Colin McRae, Andy Wallace and Anthony Reid.

The Tuscan Challenge put TVR back on the racing map, and opened the door for the development of an all-new GT challenger, with the intention of taking on its road-car rivals from Europe and America.

But, perhaps oddly, the idea spawned from keen privateers as opposed to from the factory itself. Everything was made possible by TVR’s super-enthusiastic boss, Peter Wheeler, who actively encouraged his customers to push boundaries in the name of the brand.

“Peter was truly special, a bit mad, a really wonderful megalomaniac who wasn’t scared to dig into his own pocket to make things happen,” says Martin Short, whose Rollcentre Racing concern played a pivotal part in kick-starting TVR’s rise to Le Mans.

“At the time, Porsche had just released a 911 GT3-R, which was heavily based on its road car and built to the LMGT rules. We had an idea that we could do something similar for TVR: Take a road car and produce a racing GT from it. So I approached TVR and Peter during a Tuscan round at Spa and suggested it. Peter listened intently, and then simply said: “OK, I’ll think about it”. We did the race weekend and drove home on the Monday, then on the Tuesday suddenly this call comes through from the factory saying, ‘Good news, we’ve found you a chassis, and there’s an engine and a stack of bodywork and other free bits here waiting for you. When did you want to pick it up and get going?’ 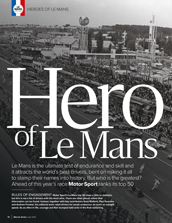 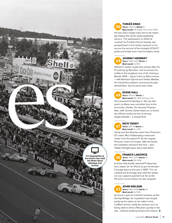 RULES OF ENGAGEMENT: Motor Sport’s Le Mans top 50 owes a little to statistics but this is not a list of drivers with the most wins. There are other places where…

“Next thing I knew, I’m driving the factory’s horrible bright-pink demonstrator back to base with all these bits to turn it into what would become our Cerbera Speed Six. It was pretty successful for a backyard effort. We blew up a lot of bits, and learned a load from it. That really began TVR’s trail to Le Mans.

“When the Tuscan R, or T400R, idea came about, we worked with the car’s designer on the first cars, and they used our suspension setups and geometry, anti-roll bars and we even made the rollcage for it to stiffen the chassis.”

Work started in earnest on what was then called the Tuscan R in 2000, with the R standing simply for ‘Racer’. However, when TVR’s new road-going T350 was launched in 2002, the Tuscan R instead became known as the T400R, and cars were updated with more angular front and rear headlights.

It was an ambitious programme. TVR had built up its own in-house engine division over the latter years of the Challenge, and developed its the four-litre naturally aspirated straight-six engine: the famous ‘Speed Six’, which sent 400bhp straight to the rear wheels.

The factory went further with its chassis development also. Whereas the open-topped Tuscan Challenge cars were simple fibreglass bodies over a steel spaceframe, the T400R at the time laid claim to being the stiffest structure the firm had ever made, thanks to its fusion of carbon fibre and steel across the body and chassis. It led to massive weight savings, with a dry T400R weighing in at just 1100kg.

The British GT Championship hosted much of the T400R’s development, with it slotting nicely into the GTO second division. The first car was originally bought by Richard Stanton and campaigned extensively in the domestic series, but things stepped up a notch when the European Le Mans Series was announced for 2004. It opened up a whole new market for smaller marques to design and develop cars specifically for endurance racing. Suddenly brands like TVR had a more cost-effective route to Le Mans.

A series of safety changes had to be made to make the T400R fit the ACO’s homologation standards and some extra endurance equipment added, plus the car’s track was widened. A total of seven racing T400Rs were built, and only three of those actually made it to Le Mans, making them a relatively rare club, run by a select few teams and a few lucky individuals.

Keen sports car racer John Hartshorne purchased the first car, chassis 1227, from Stanton for 2002 and adds that he loved being involved with the TVR family.

“I always got on so well with Peter Wheeler, and raced against him in the Tuscan Challenge many times,” says Hartshorne. “As time progressed, a business I had an interest in became a TVR dealer, hence Peninsular TVR was proudly on my car for many years.

“I don’t think TVR ever had a grand plan to get to Le Mans, but owners like Martin Short, Richard Stanton and Lawrence Tomlinson certainly drove the factory in that direction, and also funded a lot of it. I think in the end all of the car owners got inspired by the magic of Le Mans, and TVR became an aspirational brand for British enthusiasts there.”

Short also recalls the fondness with which TVR was met at Le Mans. “Through the whole of my career I carried TVR with me in some way. So many people followed me to Rollcentre from TVR, great engineers and leaders. And my whole career was borne out of that GT period.

“Without TVR I would never have had a Le Mans programme of any form. There was something about being part of TVR that was unique. It was a special breed of people. You could call us eccentric, esoteric, a little bit whacky, but we all thought slightly differently. There’s a common ground among owners. There’s something about it that you don’t get from owning a Porsche, Mercedes or Lamborghini. There’s something quintessentially British and special about being a member of the TVR club, and I think that resonated with a lot of people.”

The T400R’s first appearance at Le Mans came in 2003 – albeit at the opposite end of the grid to those Bentleys – with a pair of Dewalt-backed cars being run by the Racesports Salisbury team. One car was eliminated after it was hit by a prototype in the first hour, while the second had its gearbox let go after 93 laps. It wasn’t an ideal debut, but TVR was there, and people had taken notice.

Hartshorne remembers his first Le Mans, standing on the track ahead of the start in 2005. The first, and only, Le Mans appearance for chassis 1227, which culminated in an eighth place in class. It would also the last appearance at La Sarthe for the model just as the TVR bubble burst with a Russian buy-out, and motorsport was no longer on the agenda.

“Being a racing enthusiast since 11 years old, I found Le Mans really emotional,” says Hartshorne. “It was my first time there as a competitor, at the age of 48, and I was really emotional before the start. Standing there I suddenly realised how big this race was. The support of the British fans was incredible. Even at night you could see signs and flags supporting the British drivers, and TVR. I was in the car when we took the finish and that was also hugely emotional. Especially after a long day and a bit in sweltering heat… These were the days before air-con in race cars!

“I loved driving the T400R for a few reasons. Firstly its smile-per-mile value is superb. Our budgets were nowhere near those of the Ferraris or Porsches, yet we did the same job. We’d normally run the engine at a lower RPM to protect it, and the noise was just superb.

“The T400R was also very confidence inspiring. It spurred you on to push and was easy to recover any mistakes and it rarely tried to spit you off. The key to getting more out of the car was patience mid corner, it tends to have a mid-corner understeer balance, and if you wait for the front grip to return, suddenly you find a chunk of lap time, without even trying.”

That specific car, T400R chassis 1227, was retired after the 2006 Le Mans Series season, and is now being offered for sale through Ollie Hancock’s dealership. It has benefited from a full refresh at the hands of its original engineer, Dennis Leech, and was last raced by Hancock himself during the 2019 Silverstone Classic.

Now eligible for a series of classic sportscar events, such as Masters Historic, it comes complete with original team kit from its Le Mans outing and a host of spares.

“It’s totally iconic and a super rare car,” adds Hartshorne. “Everyone knows the Dewalt TVRs, they need no introduction. Only three chassis raced at Le Mans over three years, and only seven were ever built, and this is the only car in period spec as it finished Le Mans.

“The package is literally everything we raced with lastly in 2006 during the Le Mans Series. Also, We’ve made it reliable over the years, Ollie last drove it at Silverstone Classic last year and it didn’t miss a beat all weekend, as well as being bloomin’ fast, keeping up with 996 RSRs! The new modern Dunlop tyres really suit the car and have given it some pace for sure.”

The asking price is £349,500, and further details of the car and its race history can be found at www.olliehancock.com.