Charlie Martin is racing towards a Le Mans 24 Hours drive, and as a transgender racing driver and role model who launched her own initiative for LGBT month, she could make history 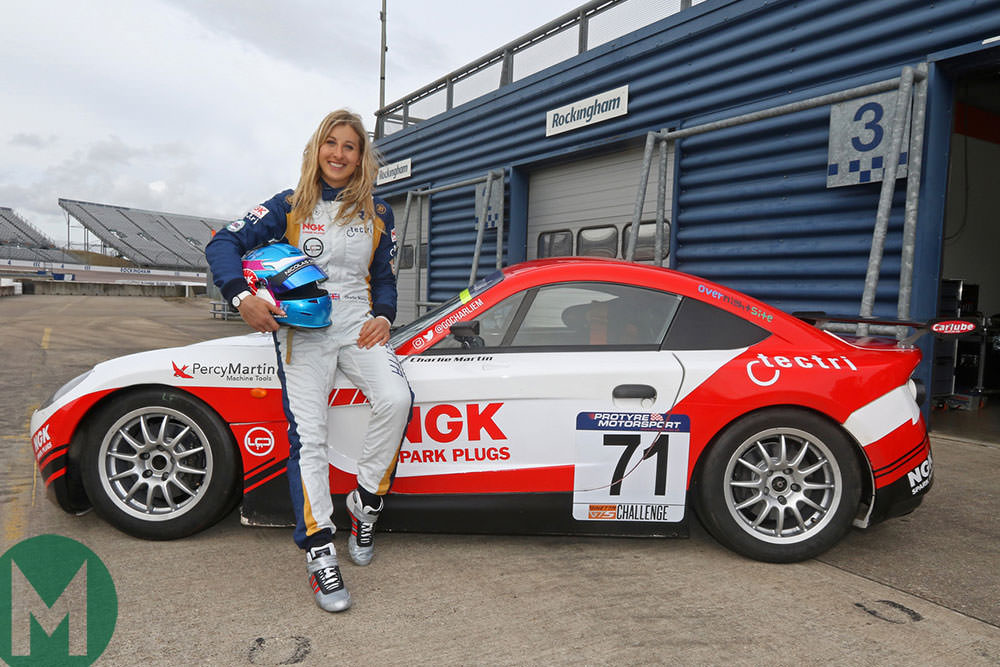 Charlie Martin aims to be the first transgender driver to compete in the Le Mans 24 Hours. But, in her words, “that shouldn’t be a story.”

But in the context of LGBT pride month, the Leicester-based driver is doing her bit to push visibility and bring her positive message to the racing paddock.

“People will say it shouldn’t be a big deal that a driver is transgender but I think it’s important that people in those positions should be visible. People from the LGBT community are in all sports and all walks of life, and they inspire and encourage others.”

Martin, who has picked up three Am-class podiums in the Ginetta GT5 Championship – a support series to British GT and the British Touring Car Championship – has already been spreading her positivity, giving out 130 pride stickers to drivers at the Silverstone meeting in early June.

“I’ve never seen any reference to pride month at all in motor sport but the reaction that we had from SRO [the Stéphane Ratel Organisation] and Ginetta was really encouraging and really positive.

“I didn’t want to feel like I was, in any way, enforcing this on anyone,” she stresses.

“I just thought that this was a nice opportunity to show support in a way that was visible and easy to do. Putting that to Ginetta and SRO, they immediately came back and said, ‘that’s a great idea, and we’d love to be involved.’”

People will scoff and play down the importance of a seemingly small gesture, but Martin has probably heard it all before. She just knows the importance outweighs the few negative comments she receives.

“The trans community receives so much discrimination on a regular basis,” she explains. “Trans people are murdered and attacked on a daily basis around the world. I did some training with Stonewall for their school role models programme. They ran through some statistics about the horrific bullying that transgender children and teenagers encountered and it was really, really upsetting.

“When you’re presented with facts like that, nobody can argue against it. And the community has regularly been under attack from many angles in the press over the past couple of years, so I think it’s easy to say that this shouldn’t be a story but if I can bring a positive message through motor sport, why shouldn’t I be able to help change hearts and minds?”

Having taken to the asphalt in anger in France, beginning her racing career 12 years ago in the UK before moving over to the Championnat de France de la Montagne (French Hillclimb Championship), Martin is now proving her worth on the track in pursuit of that Le Mans 24 Hours dream in the UK.

She started out in a Peugeot 205, tackling closed-road motor sport events and impressing her peers before moving to a Westfield, winning the Masters class at St-Gouéno in the French Championship comfortably with a class record in 2014.

“In 2015-17 I competed in the CFM and rounds of the FIA European Hill Climb Championship in a Formula Renault and then a Norma CN2 prototype, and that was just incredible. It’s such a fast car, and driving something like that on a French B-Road, you have to be really quite brave, committed, and very accurate.”

Having dived into the deep end to get ever closer to her dream of racing at Le Mans – and possibly becoming the first transgender racer in the 24 Hours if she does so – Martin entered the Norma in a three-hour race at Le Mans, finishing third, and is now committed to circuit racing, eyeing a move into the European Le Mans Series next.

“Having always considered Le Mans to be the ultimate race, it made me think ‘I’m already doing something that I never thought I’d do, so I’m going to carry on going and get to Le Mans for real.’”

A racing driver first and foremost, she still manages to be a proud ambassador for trans inclusion in motor sport as a role model.

“I imagine that pretty much everybody these days knows somebody that identifies as LGBT, and I think if there are ways that people are happy to engage with the LGBT community and introduce that into motor sport, it’s a good thing,” she says.

As for whether those in the upper echelons of racing are doing enough, their silence isn’t helpful at all.

“Not everybody has to talk about it, but at the end of last season there was an incident with Lewis Hamilton and his nephew, and that wasn’t a good thing at all to happen,” she says, alluding to Hamilton’s public mocking of his nephew for wearing a dress.

“I think that’s perhaps an example of where more people had an opportunity to speak out.

“Ultimately, whenever there’s an opportunity for someone to speak out and do something positive, especially at the higher levels such as Formula 1, sending out a strong message is a good thing to do, of course.”


And while LGBT representation in motor sport isn’t very widespread – Hurley Haywood and Danny Watts possibly the most high-profile examples of LGBT drivers – she explains that LGBT people, by definition, are “present in all walks of life, so it stands to reason that there are people in motor sport who aren’t visible by choice or feeling. It’s important for those drivers, mechanics or team members to know that they can be visible if they want to be.

“It’s important for those drivers, engineers or team members to know that they can be visible if they want.

“We’ll be there if they come out and say something like, ‘hey I’m gay and I’ve never said anything before about it, or whatever.’ I feel like the environment needs to be like that.”

With gestures such as giving out rainbow pride stickers at Silverstone, Martin is doing her bit to shift the paradigm during pride month. But she does so throughout the year, using her platform on social media to help.

“Things like Transgender Visibility Day [on March 31] are important for the community and me.

“But someone could meet me and not know that I’m trans, so within reason I could go through motor sport or my life without bringing it up – that’s not to say that I randomly go around telling people – but I made the decision to do something positive and have an impact and change people’s lives.”