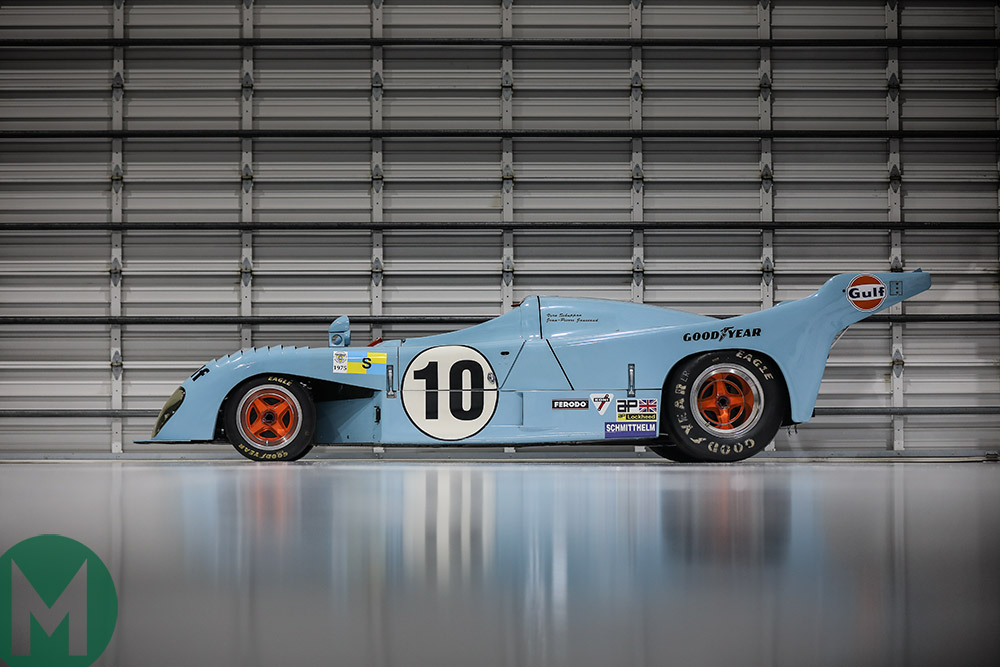 This is a forgotten successful stalwart of Le Mans. Yet its colours, drivers and engine are all familiar.

Heading to auction at Pebble Beach with Gooding and Co, this is the Gulf-liveried, DFV-powered Mirage GR8/802 that visited the Le Mans podium no fewer than three times in its five outings, under numerous monikers.

Nominally a Gulf, the GR8 was developed for the 1975 World Championship of Makes season with Le Mans’ Mulsanne straight in mind. Rumours of it making a low-key debut at Brands Hatch in the 1974 1000kms seem off the mark; John Horsman’s Racing in the Rain autobiography mentions only testing the chassis of GR8/801 late in 1974.

It almost never competed at all. Grady Davis, Gulf’s executive vice president and the man who took Gulf Oil racing, was retiring and the board had doubts about continuing its Gulf Research Racing Company.

“Only Le Mans”, was the initial deal laid out to Horsman and John Wyer for 1975, which was later retracted, until ‘Death Ray’ persuaded Gulf of the benefits of one final fling.

Two aging GR7s had been sold for £44,000 to Georg Loos, and Wyer explained in a series of letters that the GR8s would be even more lucrative if they found success.

Part of that proved to be true.

The Len Bailey-designed car was slightly longer than the GR7, 6.1 inches to be precise, and the GR7’s bodywork was lengthened to fit. This, finance dictated, was to be done by Gulf themselves rather than designed and machined by Bailey. Their relationship would inadvertently sour.

‘Brian Holland, our excellent master machinist,’ Horsman writes, ‘had finished a scale model by the time we had a visit from Len Bailey. He arrived with drawings in hand for the GR8 body shape. He laid them out for inspection, we were horrified to see that Len’s shape was almost exactly the same as our model, which was sitting in the drawing office as we talked with Len.

‘We had to tell him that we could no longer afford his services, and we really should have shown him the model then and there, but we were too surprised. Any time after that was too late. I’m sure Len must have thought we stole his design. I never had the chance to explain to him, and I doubt he would have believed me anyway.’

There was one problem with GR8: Gulf had followed the rulebook to the letter and designed its rollbar to be five centimetres above its tallest driver. ‘If it were not so, the bar would offer him not much protection,’ Horsman said.

Others simply used their smallest driver to pass scrutineering, in doing so lowering its height and improving aero efficiency by reducing drag.

Still, the lack of competition at Le Mans in 1975 meant that would matter little. Similarly, the fact the programme wasn’t signed until May, six weeks before the race, didn’t affect its pursuit of victory.

This second car, 802, only hit the track in June with Derek Bell and Jean-Pierre Jaussaud testing the two works cars at Silverstone. Six days later, the cars were being scrutineered in Le Mans.

‘A non-event’, Michael Cotton described the race in July 1975. There were no Matras, having pulled out at the end of 1974, nor were there Alpines, Ferraris or Alfa Romeos. It was a gimme for Gulf.

The ACO mandated cars must run for a minimum of 20 laps at Le Mans, and the big teams withdrew. More than half the grid would be Porsche 911s.

Vern Schuppan, sharing 802 with Jaussaud, led Bell through the opening hour until Jacky Ickx climbed into 801 and never looked back. Things were less simple for 802 – six hours in, the electronic ignition box was replaced to cure a misfire and a puncture dropped it to sixth.

Bell and Ickx, despite a cracked exhaust and vibration caused by broken engine mounts, came up just 11km short of Matra’s winning distance from the year before and Le Mans’ most famous pairing made its first mark in the history books. Still, 802 came back through to finish third.

Yet nobody bought the GR8s, and Gulf shut up shop.

Harley Cluxton, who had bought a GR7 in 1975 and recruited Vern Schuppan to win a handicap race at Elkhart Lake, was eventually tempted to upgrade a year later and took ownership of the GR8s. He recruited Horsman to prepare the cars, now known as Mirages, for a team named ‘Grand Touring Cars’ after Cluxton’s dealership and entered the 1976 race.

Bell and Schuppan would drive 801, a French pairing – dictated by new partner Total – of François Migault and Jean-Louis Lafosse would pilot 802.

Once again, preparation began late – May 25, only for rain to cut short the now-annual Silverstone.

Works cars were back in opposition for 1976, with Ickx sharing a Martini Porsche 936 with Gijs van Lennep, Jürgen Barth and Reinhold Joest in another and Rolf Stommelen and Manfred Schurti in the sister 935. Patrick Tambay, Jean-Pierre Jabouille and José Dolhem claimed pole for Alpine, more than six and a half seconds clear of the field…

The Mirages managed only sixth and seventh, 15 and 18 seconds back. The French car, 802, ran well but couldn’t match the pace of the 936, while 801 battled a series of problems and tumbled to fifth.

With second place almost a foregone conclusion for Lafosse and Migault, disaster struck dramatically with just a few laps left to run. Its rear bodywork had disappeared, breaking off when a mount snapped. But Lafosse failed to pit, continuing for three laps and giving away time to the chasing-but-ailing de Cadenet Lola. Despite the clogged pitlane and failing re-start, 802 held onto second place and claimed the car’s second Le Mans podium in as many years.

Twelve months later 802 would be back, and again it landed on the second step of the podium. This time it was with Schuppan and Jean-Pierre Jarier, and its DFV had been replaced by a Renault V6. The Mirages failed to make the top 10 in qualifying, behind the works Porsches and Alpines, but 802 ran smoothly as others failed.

Not one Alpine saw the flag, and the sole remaining Martini Porsche prevailed – but only just. Comfortably ahead and cruising, it blew out plumes of smoke inside the final hour and crawled to the pits. Such was its lead it remained in the pits for half an hour, leaving in the closing stages to do just enough to secure the win: creep over the line between 4:01pm and 4:15pm. It did so, but two minutes early, and was therefore required to complete another lap. Remarkably it reappeared across the line at 4:05pm, still with 11 laps in hand, denying 802 an unlikely victory.

Still 802 wasn’t done, finishing fifth a year later – known now as Mirage M9. Once again Renault powered, its rollbar was lowered and cockpit narrowed. Enough, to Horsman’s displeasure, to warrant a new name. Straightline testing was, this time, conducted on the new Interstate 10 freeway in Phoenix…

Schuppan was joined by Jacques Laffite and Sam Posey for Le Mans, only for engine issues to cost the car four hours in the pits. Tenth was all it could manage.

Its swansong came the following year, in 1979. Back with DFV power, it had revised bodywork (‘the best looking and most effective open body I ever made’, reckons Horsman) and water cooling was added. So too was another digit to its nomenclature, becoming Mirage M10.

Once again, Schuppan was paired with Jaussaud, this time with the experienced David Hobbs. By halfway the car was withdrawn, failing to meet the minimum distance.

It was a quiet farewell for a forgotten car of Le Mans.