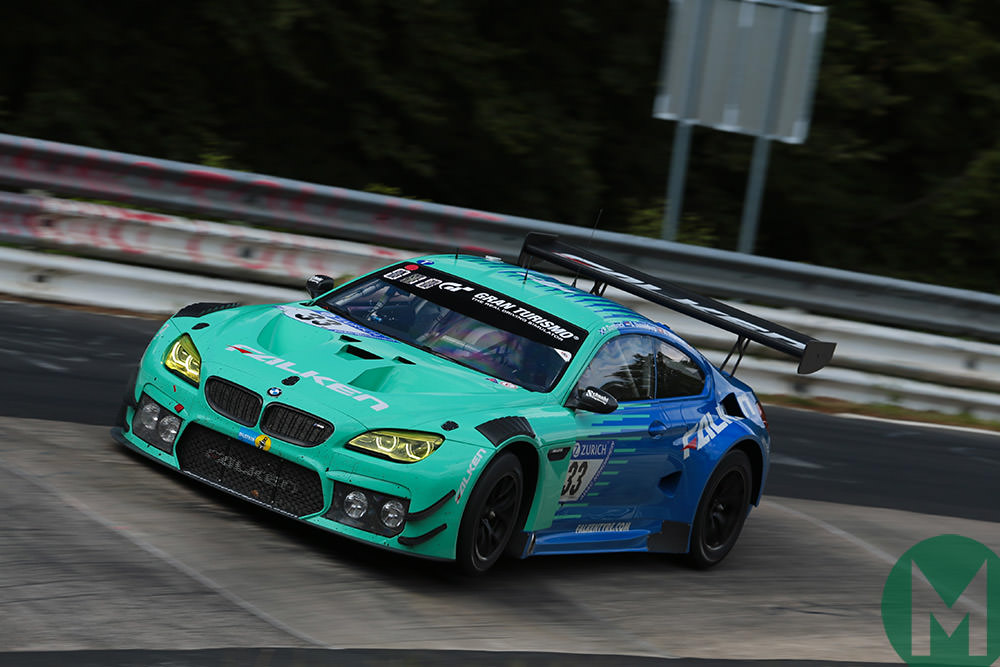 I managed to get a decent sleep overnight and bag some rest – I need as much as I can ahead of the weekend. And then it’s straight down for breakfast with my team-mates. Scrambled eggs, bacon and tea sees me set for the day.

Next up was promo work: a photoshoot with all eight Falken drivers before signing on and getting the wristband that says you are a driver. We had our first ‘car meeting’ with our four drivers, tyre and car engineer. We talk about fine tuning set-up to make sure we qualify in the top 30 and get the blue light that helps make the car clearer to traffic. There have been some Balance of Performance changes since we last competed and our BMW had 20kg removed following the qualifying race. The Nürburgring 24 Hours organisers can change BoP mid-race so we’ll see what happens.

No track walk for this event, it’s too far and, by now, you either know it or you don’t.

Tonight it’s another photoshoot – this time with BMW – and with the manufacturer’s top cars arranged on track. We’ve then got an informal BMW event with customers and friends. It’s all very relaxed and I eat with all my team-mates before heading to bed to get some much-needed sleep.

Again, it’s not an early start for us drivers. The organisers conveniently plan the weekend so that N24 drivers don’t have to get up early on any of the days. In fact, I was woken up by one of the support races but I just popped my earplugs in and dozed off.

At least we are finally on track! We have two sessions; the first is an hour and a half and we used that to run the gearbox in. Then it’s night qualifying. Each driver has to do a minimum of two laps in the dark and we aren’t pushing at this stage. It’s a good chance for a final check of things like ensuring the lights are set right but generally it was about meeting the lap requirements for each of us. When we finished the running, we had another team dinner and catch-up. It’s important to get on with everyone in a 24-hour race and it’s teamwork that sees you through. Falken has built a really loyal team and, because of that, everyone gives it their all.

Two more sessions today then with qualifying so important, we focussed on giving Jens Klingmann, who was to qualify our car, the best shot. He ran the new tyres and made the most of the track time. He delivered the goods with a very fast lap. One mistake can cost you five or six places but Jens did a great job and our qualifying was a step up from last year, so we are moving in the right direction.

Qualifying into the top-30 is a priority and we did that with 21st. The Porsches were super strong this year and Sven Müller put in an amazing lap to start P2 in our sister Falken car. News came later that there were to be some further BoP changes and the BMWs got a small increase in boost but, honestly, I could hardly feel it when I drove the car.

Saturday kicks off with a short warm-up session, but as a team, we don’t do it. I suppose it’s an additional risk and running of components so we sit it out. Us drivers have PR duties and we get to meet the journalists and tyre dealers that Falken has invited to come and watch. The N24 is a huge part of the brand’s marketing in Europe, and 2018 marked 20 years since Falken first took part with a Nissan Skyline R33 and Escort Cosworth. After talking to the journalists, we head off to chat about who is going to start the race. Sven Schnabl and his team propose the driver order and then we get a chance to discuss it. It’s not fixed but we were all happy with Stef Dusseldorf, me, Alexandre Imperatori and then Jens as the running order.

Before the race starts you’ve got the grid walk. Unlike Formula 1, everyone is encouraged to go on the track and it’s an amazing atmosphere with music, stunt shows; mental but brilliant. This year for the first time, all drivers had to go on the grid. It was ram-packed before that rule but it’s stuff like this that keeps the fans coming back year after year. They love the access and I think it is right to keep these things even when the event is getting bigger and more well known.

I grab some pasta at 1.30pm. Falken has a 24-hour pasta bar and together with some natural protein bars I got from Tesco and bananas, that’s me set food-wise for my stint.

I knew I was going to be in the car around 4.30pm as we were all starting with single stints. As an endurance driver, I don’t have rituals before I get in the car. You can’t easily do that in a 24-hour event, as you’d have to do it a few times! It’s just not realistic so I just make sure that I’m in the garage three laps before the car gets there and as you’ll see later, that’s a good rule to have.

Our car suffers an electronic issue early on that sees us lose around 30 minutes. At today’s pace, that’s pretty much the end of our chances of a podium but the Nürburgring is unpredictable so you still push on. Strategy-wise Falken decides we should do double stints at night, the first time we’ve done that. They last two hours and 25 minutes, which is pretty much the maximum you can do in the car (two hours and 30 minutes). This works well and it also gives us a chance to get some decent rest, and I think it helps the night pass quicker. I even have time to go back to the hotel for four hours of dozing and I’m only actually awoken by the rain hitting the window sill – great!

I’m in the garage in my suit three laps before I’m due in the car. I’m dozing in the chair when I see all the mechanics start jumping up and getting ready. I’m a bit confused, I don’t have the radio but I soon learn that Stef is feeling unwell and needs to get out of the car. I’ve got a minute before the car gets here but with minimum pitstop times, there is actually no drama, except for the mechanics who have to get the car ready for me…

The race continues and with Stef unable to get back in the car, my turn to get back in comes around quicker. It also falls with the red flag and I have to do the restart. It’s actually the third time I’ve taken the restart at the N24 and, while it’s stressful for the leaders, we’ve got to drive through the spray from the 15 cars in front. Here at the Nürburgring, it just hangs in the air and doesn’t ever really clear. I’ve got massive respect for all the drivers that compete here – it’s still the toughest race by far. In that last session, I overtake another a Mercedes and we finish 15th with the Porsche in ninth.

I don’t hang around too long at the track as I’ve got a flight from Frankfurt to catch. There are a few familiar faces on the plane back to Birmingham including Darren Turner and Jonny Adam. Delays mean I don’t get back home until 1am. I had actually been looking forward to a single malt and relaxing on the sofa for half an hour but everyone at home has turned in so reluctantly I head straight to bed. The only problem is I’m still buzzing and I’m not getting to sleep anytime soon.

Up at 6am and I feel brand new! First job is to nip to the doctors and get my finger checked out. I’d slipped on the loft ladder at home a week before the race and banged my hand. It was still swollen but hadn’t been an issue to drive so I’d just got on with it. Crazy to think I’ve survived the Nordschleife but beaten by domestic duties.

No rest though as in a couple of days I am heading off to support at an Aston Martin Vulcan day, something I really enjoy doing and the owners are brilliant. That’s my 15th N24 complete and as I said on Twitter, I’ve got at five more in me. Roll on 2018!