Nissan’s new GT-R NISMO is the latest in a line of left-of-centre designs from Ben Bowlby of DeltaWing and Zeod RC fame. But for a long time, the company’s motor sport history was much like that of many others: extensive domestic touring car and GT programmes with some hit-and-miss efforts in international sports cars. 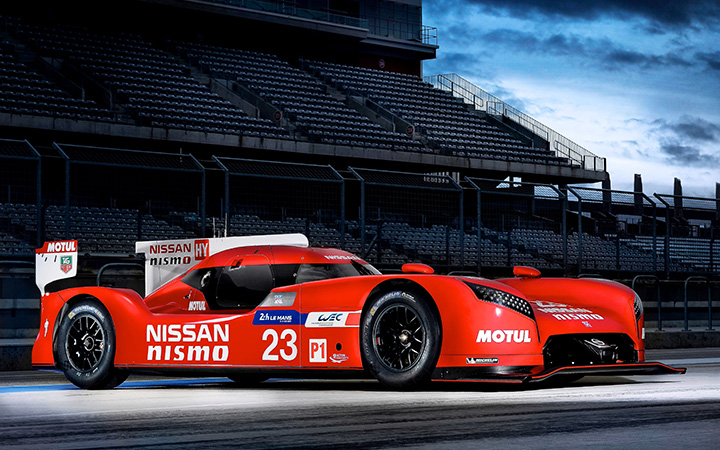 Even so, the high points of Nissan’s on-track endeavours still resonate with fans across the world. Here’s the best of the bunch.

In the interests of keeping this list reasonably brief, I’ve taken 1999 as a cut-off, the last year Nissan competed at the top level at Le Mans.

One of Nissan’s first tries at building a sports prototype, the R381 was subtly brilliant. The Can-Am spider shape and Chevy V8 (which replaced an underpowered Prince straight-six in the planning stages) were de rigeur at the time, but it was the high rear wing which placed engineer Shinichiro Sakurai and his team were right up there with Colin Chapman and Jim Hall when it came to aerodynamics.

The two halves of the wing moved independently, controlled by hydraulic actuators, giving extra downforce on the side of the car that needed it at any given corner. It was essentially a continuation of Hall’s theory for the Chaparral 2E, and it worked: the R381 won the FIA-sanctioned Japanese Grand Prix at its first try in 1968, Moto Kitano beating the Porsche 910 of Tetsu Ikazawa and trouncing the rival Toyotas in the process. 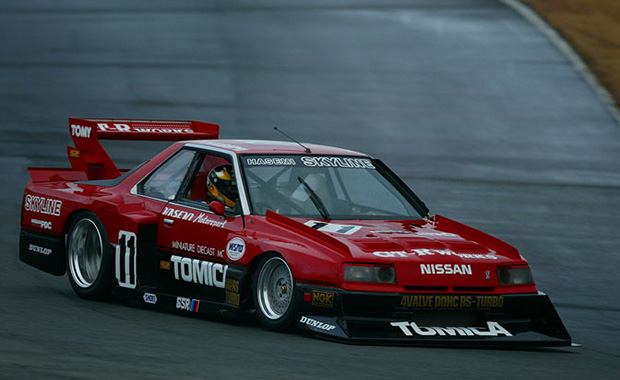 For much of the ’70s, Nissan produced a number of excellent but fairly tame touring and GT cars for the Japanese and American customer markets, but nothing too crazy. Then, in 1979, came the Super Silhouettes, wild Group 5 cars with enormous bodywork and huge power.

Masahiro Hasemi, he of the famously erroneous yet somehow still accepted fastest lap in the ’76 Japanese GP, campaigned this Skyline in the ’82 and ’83 seasons. Really, we could have gone for any of Nissan’s cars from that era – the ’81 Silvia and ’83 Bluebird were just as impressive – but this is the one that seems to have transcended its series’ cult status among fans. Maybe it was because it was included in Gran Turismo 2… 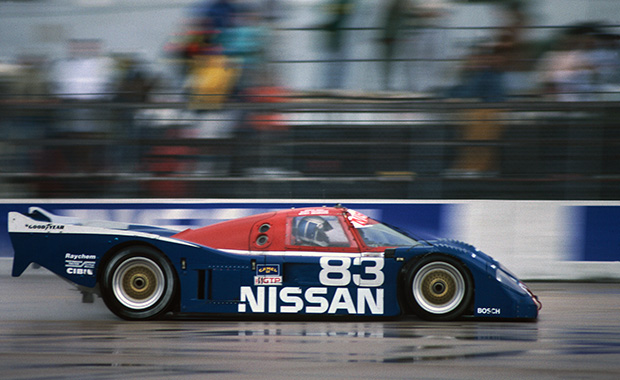 The ‘hit’ part of hit-and-miss. Nissan’s first IMSA GTP car appeared in 1985 and, after three years of teething troubles subsequent iterations would help the company secure four straight drivers’ titles for Geoff Brabham (1988-91) and three wins at Sebring over the same period. It’s the only time Nissan has dominated a major championship outside Japan and it did so against the might of Porsche, Jaguar and Dan Gurney’s Eagle-Toyotas. The latter squad would eventually dethrone Nissan from the top of the tree, but not before an incredible stat was in the record books.

Out of 58 IMSA races the GTPs were eligible to enter over 1988-91, a Nissan won 28 of them. That’s very nearly 50 per cent; not bad against that kind of competition.

Nissan’s early ’90s Skyline was a winner almost as soon as it hit the track. Jim Richards and Mark Skaife won the Bathurst 1000 two years running with the R32. But the rules breaks given to the car make its wins unpopular to this day, so fittingly it was in Japan that the car had the biggest impact. Masahiko Kageyama took his Calsonic-sponsored example to the inaugural All-Japan Japanese Grand Touring Car Championship (JGTC) in 1993 and followed it up with a second title in ’94 before the car was replaced by the R33 model. 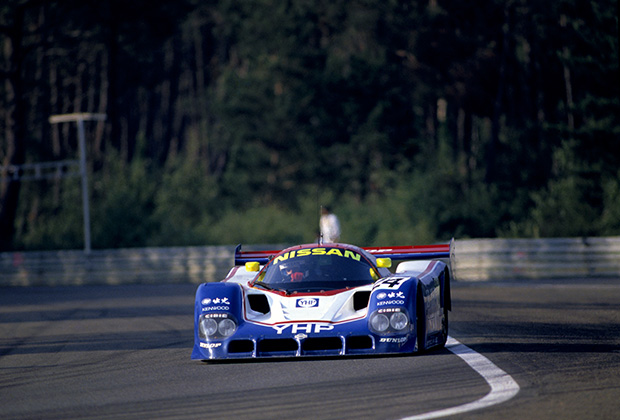 Nissan’s IMSA prowess never translated to the world championship, its run of Group C prototypes lacking the reliability of their US counterparts.

Starting in 1985, Nissan co-developed a series of aggressive-looking racers, first with March and then with Lola. The R90 came towards the end of that run and never achieved that much outside of Japan. But one thing it’ll always be famous for it Mark Blundell’s vicious pole position lap at Le Mans that year. With wastegates jammed, his time was over six seconds better than the second-place Porsche 962. It makes for one of the most intimidating onboard videos out there and a brave display of control from Blundell. 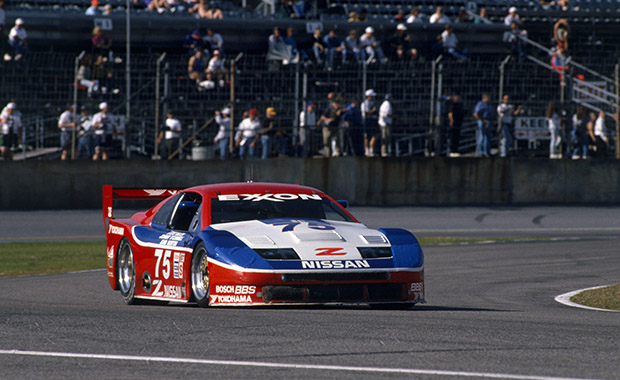 Daytona, 1994: a bad day at the office for the prototypes meant victory for Nissan’s 300ZX GT car.

It’s not as far-fetched as you might think. Sports car racing was going through its mid-90s downturn and only a handful of poor-quality prototypes showed up, so victory for Paul Gentilozzi, Butch Leitzinger, Steve Millen and Scott Pruett was a case of not getting anything wrong.

But when you consider that Millen – with John Morton and Johnny O’Connell – repeated the feat at Sebring, then took class victory and fifth overall at Le Mans that year, the 300ZX starts to look like one of Nissan’s greatest race cars. 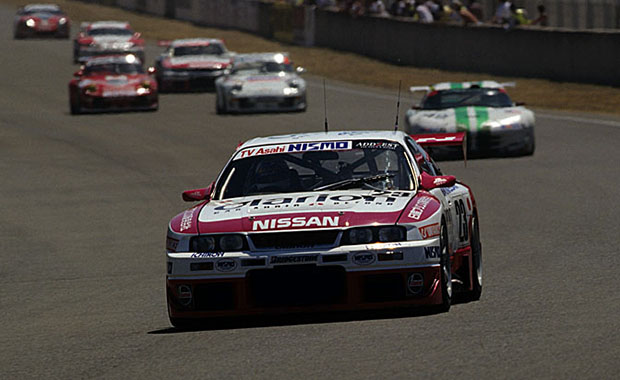 Just like its predecessors, the R33 Skyline was a successful GT racer. None of them looked particularly svelte, with bumpers and arches bulging all over the place, but that Japanese look was huge at the time thanks to Gran Turismo, in which these cars starred.

In 1995 and ’96 Nissan took a pair of R33s to Le Mans, with 10th in the first year the best result. Again, it was in Japan where the R33 excelled, with Kageyama picking up where he left off with the R32 by winning the ’95 title. In 1998 he teamed with Érik Comas to win yet another JGTC crown. 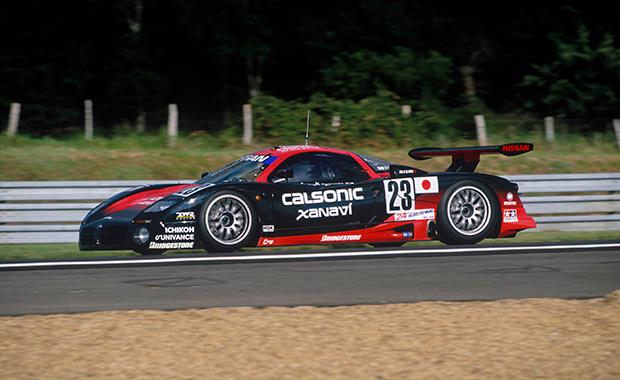 Nissan again gunned for overall honours at Le Mans in 1997 and ’98 with the R390. It had a lot going for it: it was built by Tom Walkinshaw racing, designed by Tony Southgate and driven by the likes of Martin Brundle, Riccardo Patrese and JGTC champions Comas and Kageyama. But in the first year 12th place and two DNFs was all it could muster, even with the Patrese/Aguri Suzuki/Eric van de Poele car qualifying third.

In ’98 the project’s fortunes improved somewhat, with all four R390s lasting the 24 hours – the Kazuyoshi Hoshino/Kageyama/Suzuki car finished in third place.

The regulations changed for 1999, making the R390 obsolete. Nissan responded with the uncompetitive R391 and then left Le Mans as a constructor until 2015.

Which is your favourite?