How the Aston Martin DP215 was created, unceremoniously pulled from the racetrack, and then restored to its former glory 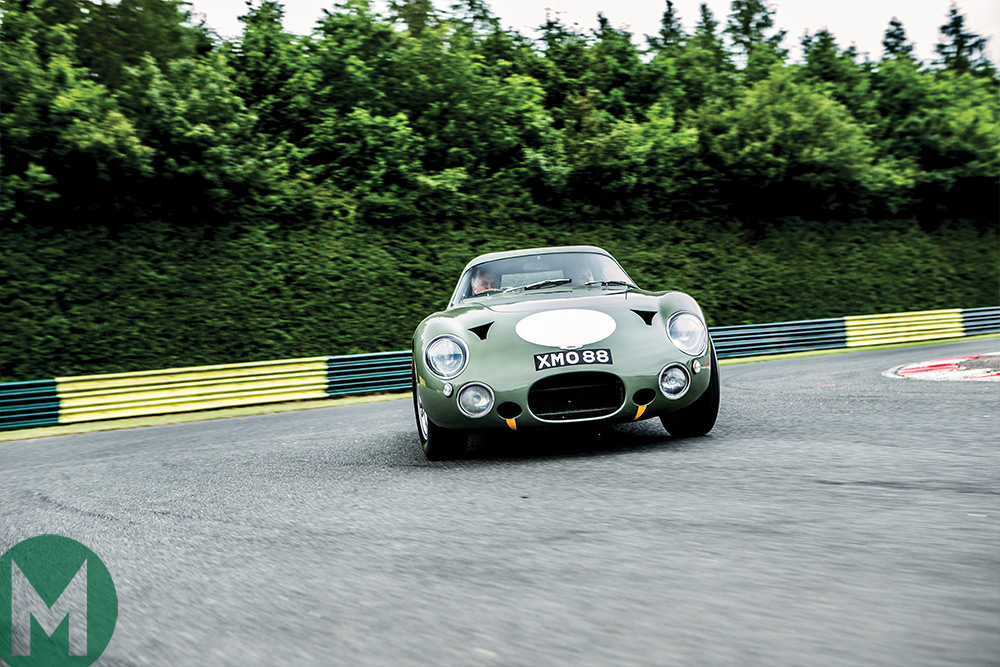 ‘Win on Sunday, sell on Monday’ – that’s what Aston Martin dealers were thinking when they begged the manufacturer to return to works racing in the early 1960s.

The British marque had won Le Mans in 1959 with the DBR1, and pulled the shutter down on works racing.

But now the DB4 grand tourer needed shifting from dealer floors, and it was French distributor Marcel Blondeau who put pressure on the marque to boost sales with a new competition car based on the production DB4.

So Aston Martin responded with the Design Project 212, based on the DB4GT, and entered it at Le Mans in 1962 with Graham Hill at the wheel.

This one-race trial ended with the DP212 retiring after six hours with a piston failure, but David Brown responded by building two DP214s and a DP215 Prototype – both developments of DP212 – for the 1963 season.

Wind-tunnel tests at the Motor Industry Research Establishment (MIRA) led to the DP212’s bodywork being re-shaped to counter rear-end lift on the Mulsanne Straight: a new spoiler was added to the chopped tail, and the nose was extended and lowered with smaller air intakes on the nose to form the DP215. This ultimate prototype was also given a dry-sump engine and a transaxle from the DBR1 at the request of engineer John Wyer.

At the April test weekend, just a few months until Le Mans, DP215 still wasn’t ready so DP212 ran in its stead. Come June and qualifying, with Phil Hill and Lucien Bianchi at the helm, DP215 managed a staggering 198.6mph on the Mulsanne.

“I was astounded by the six-cylinder engine’s torque, particularly at Tertre Rouge corner, the last one before the Mulsanne Straight,” said Phil Hill of DP215. “Le Mans cars have such high gears for the straight and often feel dead leaving that right-hander. Not the Aston, which felt quite meaty out of Tertre Rouge and away. And flat out it needed only the lightest steering pressure.”

Wyer was confident. “All the cars were perfectly capable of winning the race,” he said. The optimism quickly faded, however, with the DP215’s transaxle failing after three hours and both DP214s had piston failures well before the halfway point.

At Reims, Jo Schlesser’s charge to the front in DP215 was cut short when the car’s transaxle once again proved unreliable, retiring it to the glee of Mike Parkes and the works 250P Ferrari. Ahead of the Guards Trophy at Brands Hatch on August Bank Holiday, the transmission was replaced with the one initially intended for the car (from DP212), the team hoping not to be stung a third time.

But Bruce McLaren, pencilled to drive, had crashed his Cooper-Climax the day before at the German Grand Prix and was forced to withdraw. And DP215 was shelved.

It was sold by Aston Martin in 1974, sans four-litre engine and gearbox, but with original suspension, dials, instruments, and a slightly bent chassis from that M1 crash. The unfinished project changed hands numerous times, eventually being fitted with DP214’s engine, the interior and the bent chassis restored.

The car appeared at the Goodwood Festival of Speed in 1996 and was traded for a Formula 1 Ferrari restoration project. Somehow, the new owner sourced and fitted an original gearbox from DP212 – one of just six remaining.

The owner also had his eyes on the last piece of DP215: the engine. This was sourced from a DP214, having run just 300 miles from a rebuild in 1992. Dry-sump components were fitted and the engine recorded 300bhp on the dyno.