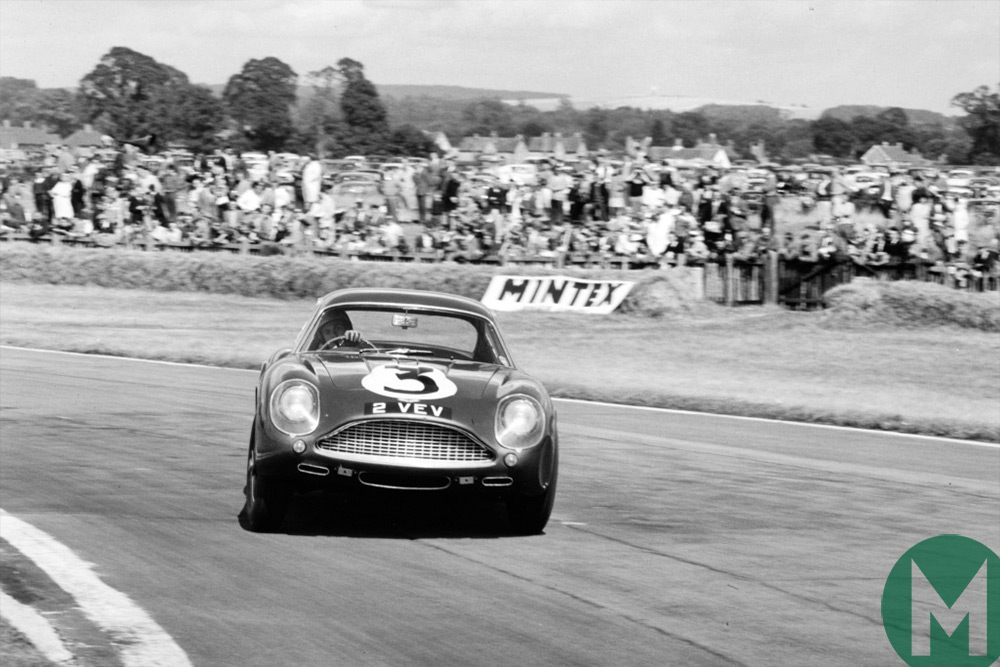 This weekend it was in Chichester, headlining Bonhams’ Festival of Speed auction on July 13, having been in the same hands for the past 47 years.

The iconic Aston was estimated to clear the £10 million mark, possibly fetching £15 million, which is still shy of the Aston Martin DBR1 (chassis no1) sold at Monterey last year for £17.5 million.

Designed to take on Ferrari’s 250 SWB, 19 DB4GT Zagatos were built – but 2 VEV became one of only three to take on the factory’s MP209 prototype form.

Davison, a month later, took 2 VEV to third in the British Empire Trophy behind Stirling Moss in a 250 SWB and Bruce McLaren’s Jaguar E-type. Victory followed in the GT race supporting the British Grand Prix at Aintree, ‘when Davison, who had been handling the Essex Racing Stable’s Aston Martin Zagato splendidly; having closed up steadily on the now-smoking Jaguar, went into the lead, to win by 1.2 sec., under the very nose of Sir William Lyons, watching from the apron in front of the stands.’

It was that same August that Clark and 2 VEV became acquainted. With Roy Salvadori at the helm of 1 VEV, Clark took this sister car. They took the flag in that order, Salvadori third with Clark fourth – despite his boot lid unlatching – behind the two formidable Ferraris of Stirling Moss and Michael Parkes. But Clark had, little did he know, immortalised the car when he drifted into that photo.

Its 1962 season was less fruitful, despite the talents of Lucien Bianchi, Clark and his British Saloon Car Championship-winning friend – and landlord, at times – Sir John Whitmore.

Lent to Equipe National Belge for the Spa Grand Prix, Bianchi claimed pole but wrote the car off crashing at Les Combes.

The factory was then able to lighten the car to the MP209 specification, and Tony Maggs gave the revised car its debut two months after Bianchi’s crash.

Clark soon returned to the driving seat, again at Goodwood, but failed to better his fourth place from the TT the year previous. Running sixth he spun, collected the race-leading Ferrari of John Surtees, and both retired.

In October, Clark and Whitmore tackled the Paris 1000kms, running second until the engine blew.

Ogier sold 2 VEV in 1964, with Alexander Roch contesting the 1964 Paris event before its gearbox gave up. Through various owners, and subsequent historic meetings until as late as the mid-‘80s, it was restored at Aston Martin’s Newport Pagnell in 1993 and retired from the track.

It headed to Bonhams’ auction accompanied by four apparently ‘massive and bound documentation folders’, which include press clippings, prints, invoices and receipts.