When he looks back on his career, Max Esterson may someday say that COVID-19 was what set him on the path to becoming a professional race car driver.

Esterson, a 19-year-old New Yorker, had finished his first partial season in Formula Ford in the United States in 2020. “Moving up to USF2000 was quite a big step financially,” he says. “When COVID came along and school was online, we thought that, since I could go to school from anywhere, I’d have a go at some racing in England at the end of the year.”

Solid performances in the Formula Ford Festival at Brands Hatch and the Walter Hayes Trophy at Silverstone whetted his appetite for more. So he returned to the United Kingdom this year and ran the entire Avon Tyres National Formula Ford Championship.

This past month, sponsored by the Team USA Scholarship, Esterson came from 13th on the grid to place second in the Festival. At Silverstone one week later, he won both of his heat races and dominated the trophy dash – a remarkable achievement for a driver who’s been racing cars for only two years.

“He ticks all the boxes and understands what it takes to become a racing driver,” says British expat Jeremy Shaw. “He’s grown up so much this year in England. He really raised his mental game, and he delivered the goods at Brands Hatch and Silverstone.”

Over the years, Team USA drivers have competed in International Formula 3, Formula Palmer Audi, even New Zealand International Formula Ford. Since 2008, the venues of choice have been the season-ending Formula Ford races at Brands Hatch and Silverstone. Coincidentally, that inaugural year featured the most successful results for scholarship drivers, with IndyCar champion Josef Newgarden winning the former and IndyCar regular Conor Daly taking the latter. In subsequent years, Connor De Phillippi and Tristan Nunez’s victories in the Walter Hayes Trophy helped launch their careers in IMSA.

At first glance, Esterson – mild-mannered, with Clark Kent glasses – seems like an unlikely candidate to surpass his illustrious predecessors. Although he grew up in a racing milieu because his father, Robin, was a motor sport engineer, a move to Manhattan – where most residents don’t even own cars – meant that the traditional entrees to the sport were closed off to him. 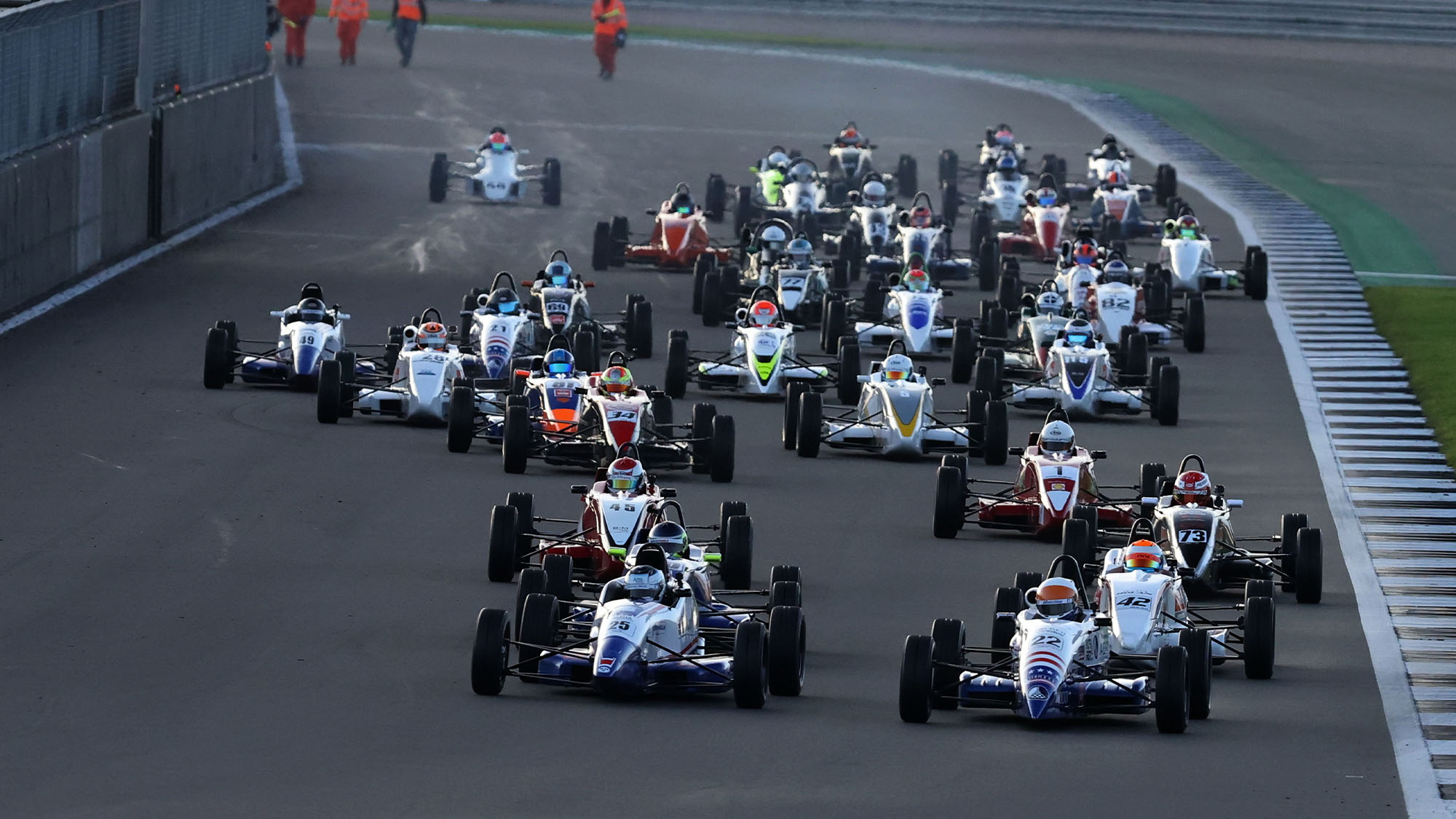 Esterson started sim racing when he was 10, using his older brother’s Logitech steering wheel. This led to iRacing, where he eventually reached the pro level in GT endurance races lasting anywhere from three to 24 hours. Then came indoor karting, outdoor karting and finally, at the end of 2019, a test in a 1600cc Formula Ford.

He began 2020 in the States and finished it in England. This year, he committed to a full season in the UK, sharing a flat in Brackley with two other young Americans and joining the well-established Low Dempsey Team. He spent nearly 70 days in the cockpit and reached the podium in 13 of 20 National Formula Ford races. Although he was in the title hunt from start to finish, he came up short in the final race and had to settle for third place in the championship.

Along the way, though, he returned to the States to compete in a two-day six-driver shoot-out to select the winners of the Team USA Scholarship. A panel of judges including former winners Newgarden, Andy Lally and Aaron Jeansonne chose Esterson and fellow New Yorker Alex Castro, 22, who’d already raced in the NASCAR Whelen Euro Series.

Unlike most other Team USA drivers – Castro among them – Esterson was intimately familiar with the competition, the circuits and, most important of all, the car. (It was the same Ray GR18 he’d been racing all season, stickered up with a new red-white-and-blue livery.) The Low Dempsey Team left nothing to chance at the festival. “I tested Wednesday, Thursday and Friday,” Esterson says, “and was kind of the one to beat, for the most part.”

He planted his car on pole and won the first heat. But problems in the semifinal meant he had to start the final in 13th. His charge up to second place featured a highlight reel of mega moves, several of them at Paddock, where he repeatedly feinted left, then dived to the inside and knifed past – on the grass, when necessary. Castro finished a fine third, giving Team USA its first-ever double podium.

Although he was jazzed by his performance at Brands, Esterson was determined to do even better at Silverstone. “I was third in the championship with a chance to win it in the last race, then a very close second at the Festival,” he says. “I needed to seal the deal. The team had worked hard all year, and they deserved it.” Mission accomplished. In a Jim Clark-style performance, he won from the pole in the heat race, won from the pole again in the semi and went flag to flag in the final.

Esterson parlayed this performance into a British Formula 3 test, and he was quickly on the pace. But he understands that finding money is as important as finding speed. So he’s not sure what the future holds. To cover his bets, he applied to, and has been accepted at, Georgia Tech, where he plans to study mechanical engineering.

Still, so far, so good. “I’ve done better than I expected,” he says. “I wasn’t ready to win races last year. This year, I didn’t expect to be the one that everybody was timing in every practice session. This is really by chance, with the whole Covid thing and going to school online. I definitely wouldn’t be here without that.”