The late, great Dan Wheldon, who was tragically killed ten years ago today, has a biography that reads nothing if not like a Hollywood script:

Plucky Brit makes his way across the pond to realise his racing dream and gets a chance at a top team in 2003 when its lead driver falls off his motorcycle. The young Limey shows he has a penchant for going round in circles at 200mph, is retained when the driver/boss retires and has soon won the States’ biggest race and is its reigning oval champion.

“Dan came into IndyCar like a firework” Dario Franchitti

The perhaps too self-assured youngster then ticks off most of the paddock, eventually finds himself out of a drive, makes an incredible comeback to win the big one again in 2011, before being killed in one of motor racing’s most horrific crashes later that year whilst attempting to claim a five million-dollar prize by racing from last to first.

A light which burned briefly but brighter than most could ever hope to, the people that knew him well were left with a unique lasting impression. Two of them, his Andretti Green team-mates Dario Franchitti and Bryan Herta, spoke to Motor Sport about how he developed into such a good Indycar driver, particularly on ovals – all done with an unforgettable panache.

“I’d known Dan since he was six years old, but he came into Indycar like a firework,” says Franchitti, whose 2003 bike crash and lengthy absence first gave Wheldon, and then Herta, a race seat at Andretti Green. “We became team-mates in 2004 with Bryan and Tony Kanaan. We used to call him the little brother we didn’t want!”

“I would say he wasn’t a good team-mate at first,” comments Herta. “But he came from a very European motor racing sort of upbringing where your team-mate is the first guy you have to go out to destroy every time – and he came in like that.”

Upon meeting their rookie colleague in 2003, ‘Older brothers’ Franchitti, Herta and Kanaan realised they needed to get Wheldon on side and harness his prodigious talent.

“I was brought in to replace Dario who was out for the year, and didn’t have the same sensibility as Dan, ” says Herta. “I was just there to fill in and do a job for them. We [Herta, Franchitti and Kanaan] all just started working really closely and well together.

“In this era of Indycar it was pack racing, where there’s a lot of drafting involved.

“You’re running very close together and there was a lot of chances to help each other out, you’d see your team-mate was two cars back and he’d pop out of the draft. You could go down the track to give him a draft and help pull him through the cars that were between the two of you.

“We started doing a lot of this and got pretty good at it. But sometimes, when we needed it from Dan, it wasn’t happening!”

However, a close discussion with Wheldon brought about a change in attitude, soon unleashing both a formidable talent and team player.

“I remember it was in the hotel at a race in Japan, and us three drivers just had a real heart to heart with Dan,” says Herta. “We said ‘Here’s what we’re trying to do’.

“Sure, at the end of the race it’s every man for himself. But up until then, we’re going to work together on track to improve our position so that if we’re fighting for a win at the end, hopefully it’s between us.

“After that talk, Dan got on board with it and became the ‘fourth team-mate.’”

As a foil to his three older team-mates, Wheldon brought something different which was appreciated in the Andretti camp.

“We all liked him very much, he was brash,” Herta remembers. “We were all a little deeper into our careers, but it was all new for him. His enthusiasm, I think we fed off that.”

The result was an Indy 500 and championship double for Kanaan, before Wheldon did the very same in 2005. From the outside the Andretti team could simply not stop winning but Herta is unsure as to whether they could have done the same without the Englishman.

“It was a very special time, and without Dan’s contribution, maybe it wouldn’t have been as successful,” says Herta.

“Dan would be like ‘Let’s go, I’m going! He was just ready. He was up for anything all the time.”

Although there have certainly been exceptions to the rule, European imports into Indycar racing are often brought in for their road course sensibility, whilst it is left to the homegrown American heroes to master the ’roundy-round’.

However, Wheldon was different, finding an immediate affinity with high-speed ovals. Why was this?

“Dan had a tremendous feel for the car in high speed,” explains Herta. “He was very comfortable with the car sliding and moving underneath him at extremely high rates of speed, and that’s a skill set that translates extremely well to oval racing in IndyCar.

“Therefore he could drive a car fast on the big ovals. We talk loose but it’s really not loose – you have to have the car very free, not scrubbing speed, you don’t want to have a lot of resistance.

“But it’s not very comfortable for most guys to drive that way, because it’s very easy to lose control.

“I don’t think him being English or of a European motor racing background made him a better or worse oval driver – I just think Dan was born for it.

“He had that ability and he ended up in the right place to showcase that here in the States, at the Indianapolis Motor Speedway.”

That ability manifested itself in real tangible success. In 2005, only his second full season in Indycar racing, Wheldon claimed both the Indy 500 and Indy Racing League drivers’ title.

For his Andretti Green team-mates, it was confirmation of something they always knew was there.

“Pretty early on, we knew he was very good,” says Herta. “So there was never a point where we doubted his talent.

After reaching incredible early heights in IRL, Wheldon was rewarded with a big-money move to Ganassi, where he accrued more wins, then moved on again in an attempt to help rebuild the Panther team. By 2011 though, he was out in the cold.

Herta, by now a team boss with his own outfit, brought in the beleaguered Brit that year as a hired gun for the Indy 500. A new, matured Wheldon walked into the team, one who took them to an incredible David vs Goliath win at the Brickyard. 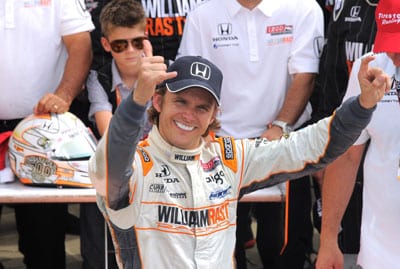 The tragedy of Dan Wheldon

“He was always great fun and, as he got older, the cocky young Dan gave way to a much more thoughtful person,” says Franchitti.

“It was interesting to talk to Bryan after Indy this year and hear him say, ‘You can’t believe the change in Dan,’” he added when in conversation with Autosport in 2011.

“He transformed us,” remembered Herta when speaking with Motor Sport earlier this year. “I don’t know if he made us believe we were going to win the race. But he believed it so badly, that he made us not want to let him down.

“Even on a rainy day he’d come in the garage, he’d sit in his car and say, ‘Let’s just adjust this or that a little bit – let’s shave a little bit off the windscreen here.”

“He just never stopped trying to improve every little detail that he could control. That really became very infectious for our whole team.

“My greatest memories about the 2011 500 were the things that Dan did that turned us into winners. 100% to this day I don’t believe we would have won with any other driver, because he was the difference maker.

“I had these very different experiences with Dan as a team-mate and then as a as a driver, but both of them were remarkable.”

Later that season, Wheldon was challenged to become the IRL’s first $5 million dollar man, the challenge being to start from last (34th place) and try to win in the season finale held at Las Vegas Motor Speedway.

Wheldon was again showing his oval acumen, having moved up ten places when a fifteen-car pile-up on lap 11 sent the Brit into the catch-fencing. He was fatally injured in what was one of the worst motor sport crashes ever seen.

“I have a lot of feelings about that day, but I still don’t know how to express them,” says Herta.

“When Dan died it was a terrible wake-up call for Indycar,” adds Franchitti. “We had been doing this pack racing on the high-banked ovals for too long. Changes were already in the works including a new car that Dan had developed, but unfortunately they came too late for him.”

Wheldon didn’t live to see the positive effects of the DW12 IndyCar (named in his honour) which he tested intensively during 2011, but the safety advances made have done much to protect drivers since, in addition to the Red Bull Aeroscreen brought in after his compatriot Justin Wilson’s tragic death at Pocono in 2015.

As equal in his legacy though, is the incredible racing talent which lad from Buckinghamshire translated into success on the ovals of America.