The careers of most open-wheel superstars follow two distinct arcs. First the upswing – go-kart championships, domination in the lower formulas and wins on the biggest stages of Formula 1 and IndyCars. Then the inevitable downturn – mid-pack finishes, one-off drives in selected races instead of a full-time ride and, finally, the demotion to sports cars.

Hélio Castroneves fits this profile to a T. In 2018, after scoring 30 IndyCar and Champ Car wins for Team Penske – including three Indianapolis 500s – he was farmed out to the IMSA prototype team. Still racing for Penske, Castroneves won five more races over the next three years and shared the WeatherTech SportsCar Championship with Ricky Taylor in 2020. But in the game of musical chairs that followed Penske’s decision to quit IMSA, Castroneves was left standing.

Castroneves was 45, and while he was as fit and effervescent as ever, a lot of people thought it might be the right time for him to motor gracefully into the sunset. Castroneves didn’t agree. “I still had the fire in my stomach,” he says. “I felt like I had gained something with my knowledge of the sports car, which opened up my driving craft.”

Castroneves shopped around, entertaining offers for everything from GT cars to the World Endurance Championship. He learned that Meyer Shank Racing, which he’d been competing against in IMSA, was upgrading its NTT IndyCar Series program with a second car budgeted to run six races. Mike Shank offered the ride to Castroneves for the same reason Castroneves accepted it: 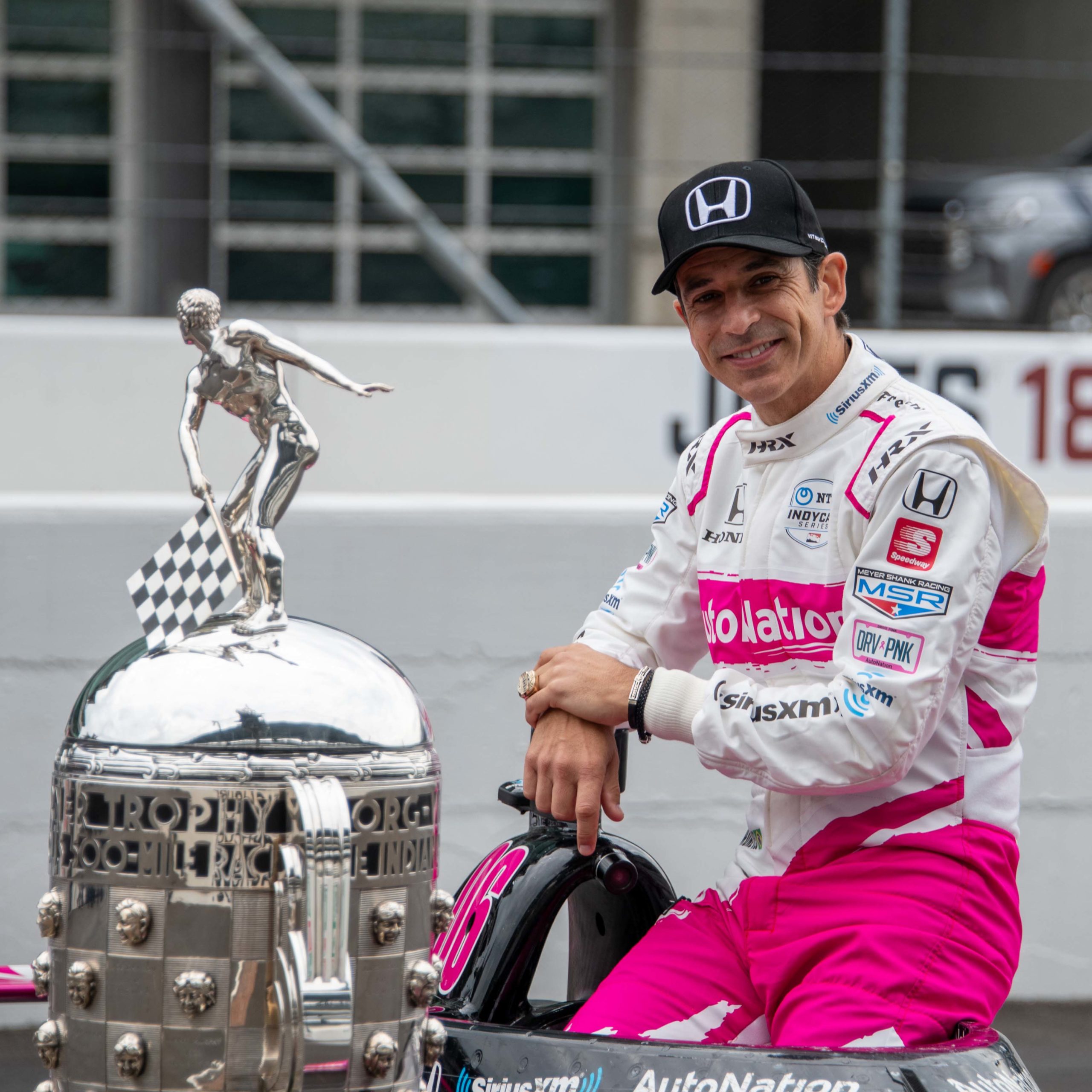 A fourth Indy 500 photoshoot for Castroneves

Castroneves won the Indy 500 as a rookie in 2001, won it again the next year, then qualified on the pole and finished a dutiful second to teammate Gil de Ferran the year after that. “Certain places suit your driving style,” he says. “Indy was my first-ever win on an oval. It came naturally to me. I didn’t need to make much of an effort to be quick.”

Movie-star handsome and with a million-dollar smile he displays early and often, the Brazilian is one of the biggest personalities in the paddock. Dubbed Spider-Man for his penchant for climbing fences after winning races, Castroneves also raised his profile beyond the sport by winning the Dancing with the Stars television show and then being acquitted of tax evasion charges after a bruising trial in a federal court in Miami. 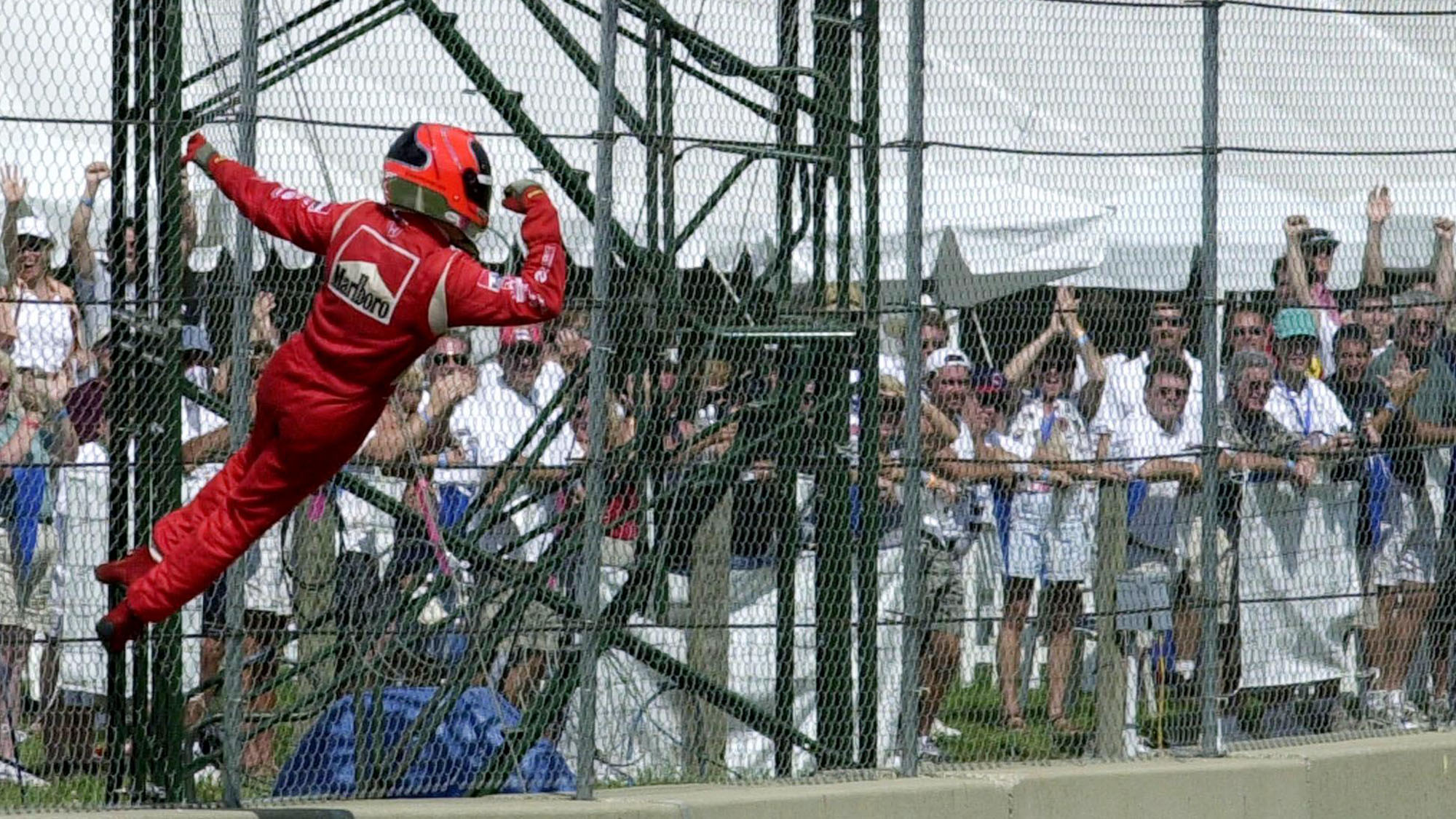 Castroneves has been climbing fences since 2000 — here in Ohio

After two decades with Penske Racing, Castroneves was moving to a small team that had never won an IndyCar race or finished better than ninth at Indy. Last May, he spent the first week at the Speedway dialling in the car, then qualified an impressive eighth. The next practice session, in race trim, went even better.

“Don’t touch it,” he told Shank after parking the car. “I’ve got what I need. As long as we have good pit stops, we have a chance to win.” 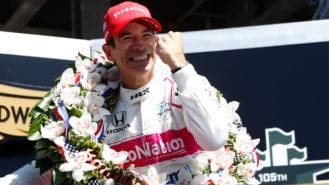 Castroneves knew whereof he spoke. Come race day, he ran near the front from the start. During the last 200 miles, the race came down to a mano-a-mano duel between Castroneves and Álex Palou, the young, unflappable Spaniard who would go on to win the 2021 IndyCar title.

“He was about two miles per hour quicker than I was, but my car was very good in traffic, so I was confident that I could pass him whenever I wanted,” Castroneves recalls. “My original goal was to pass him on the last lap. But when I noticed there was traffic ahead, I said, ‘This is an opportunity I cannot miss.’”

At the start of Lap 199, Castroneves swept majestically past Palou around the outside of Turn 1. Once in the lead, he caught enough of a draft from Ryan Hunter-Reay, driving the last car on the lead lap, to keep Palou at bay. Castroneves won his fourth Indy 500 by a mere 0.4928 seconds, joining A.J. Foyt, Al Unser and Rick Mears in the select fraternity of four-time winners. 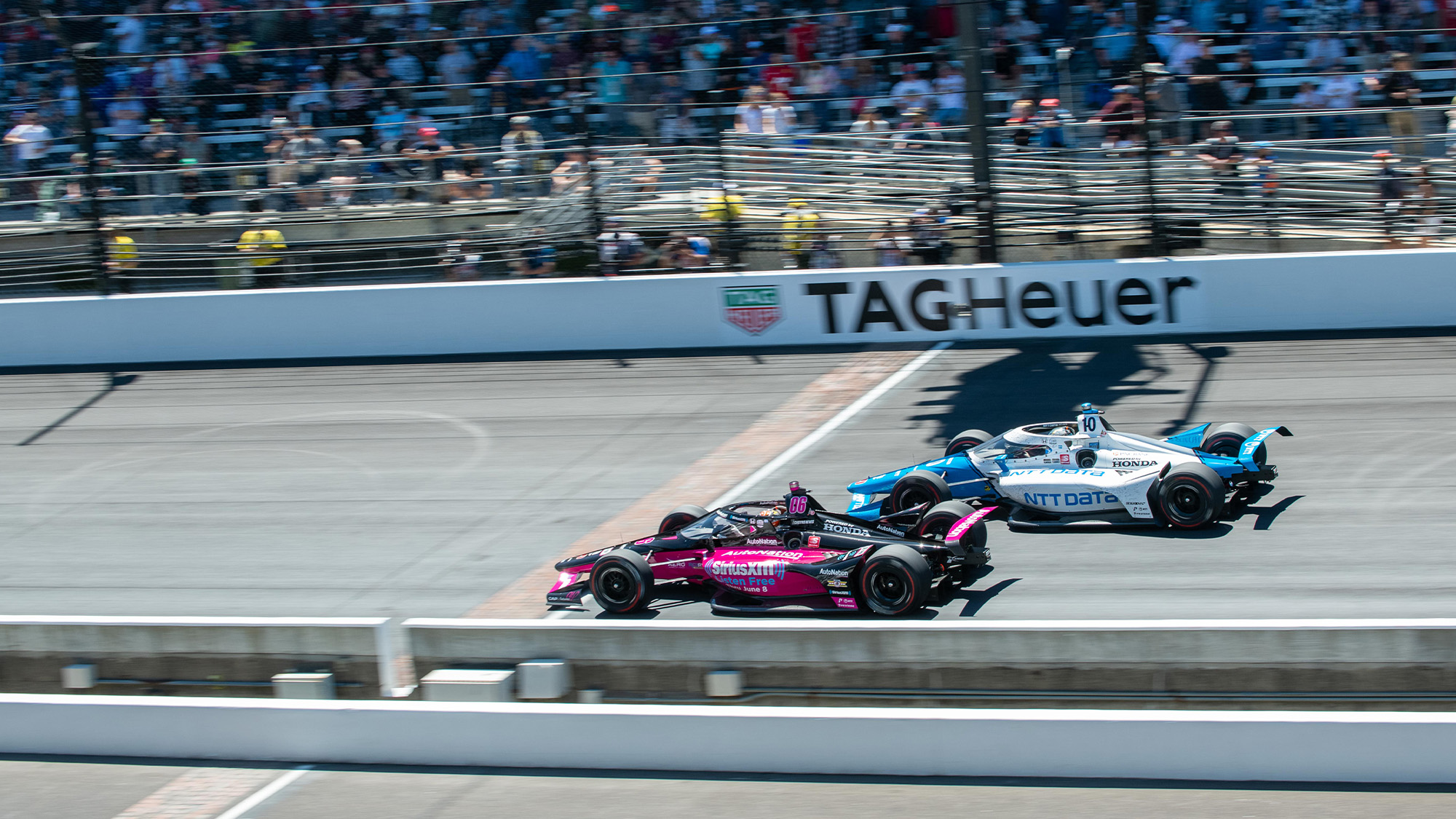 Fine margins in the fight for Indy 500 victory this year

“I was just totally stunned,” Shank admits. “I couldn’t comprehend what just happened. I got lost in the time-warp continuum. People kept shaking me and yelling, ‘We won! We won!’ and I didn’t know what to do. By the way, I’m finding out that, A, it’s a really big damn deal to win the Indy 500, and, B, it’s the gift that keeps on giving.”

Two months later, buoyed by the win at Indy, Shank was able to put together a fully funded program to allow Castroneves to do the entire 2022 season. By that time, Castroneves will be 47, or roughly twice Palou’s age, and other than Indy, he hasn’t won an open-wheel race since 2017. So he recognises that there are challenges ahead. 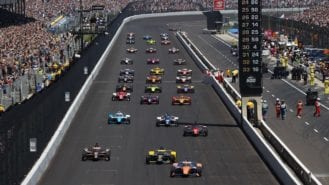 “Everybody is at the top of their game,” he says. “The competition is so strong that every tenth matters. I’m expecting a lot of ups and downs because of the lack of testing. And now we have to go to the places like St. Pete and Barber, where I have not been before.”

Castroneves ran five races at the end of the 2021 IndyCar season, and the results weren’t pretty; ninth in chaotic conditions at Nashville was his only top-ten finish. But he’s convinced that his performance at Long Beach, where he qualified third and led early, was a more accurate barometer of his competitiveness.

“My engineer and I finally understood what I needed in the car,” he says, “so I’m sure we’re going to have much better performance next year.” 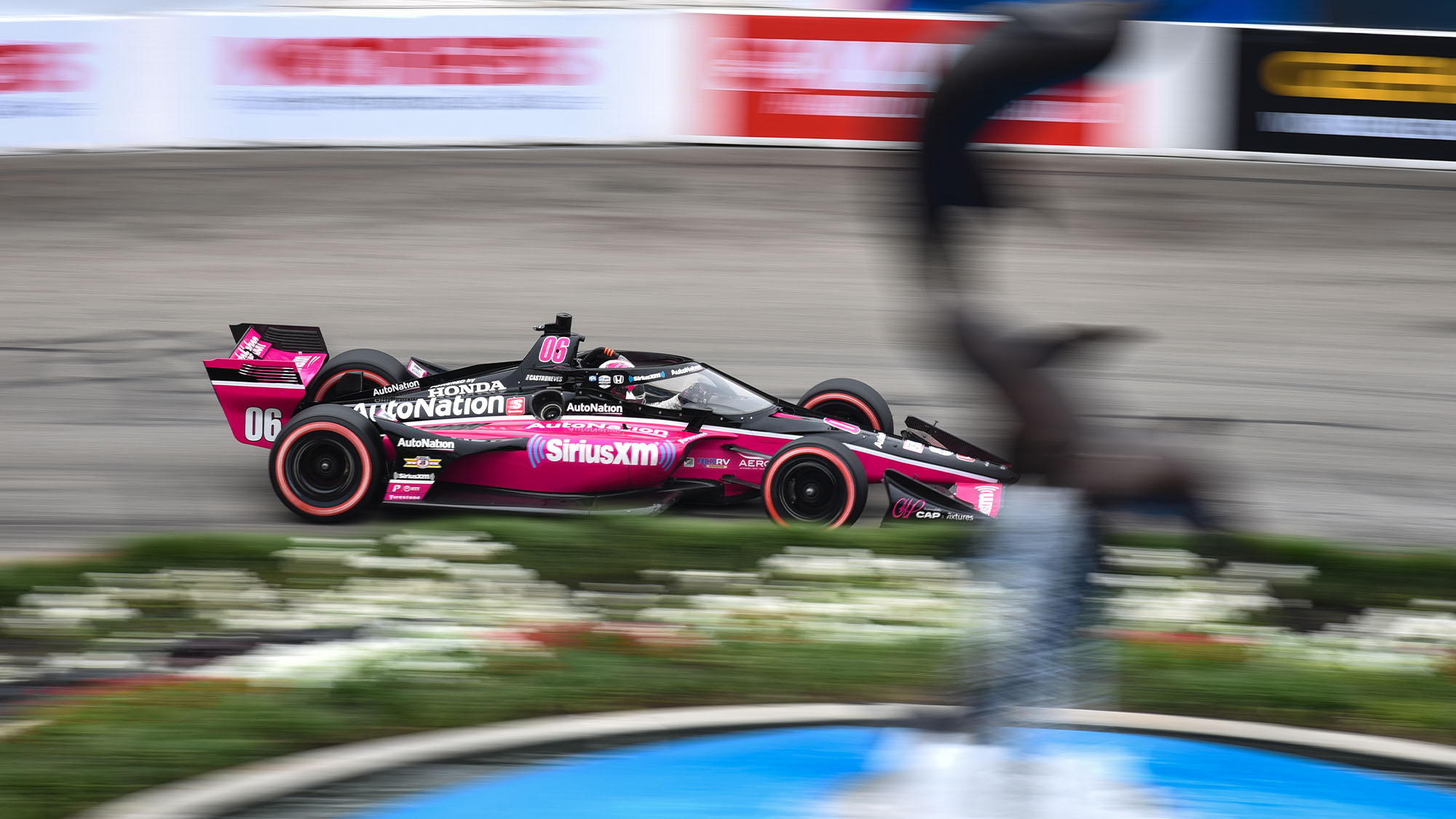 Castroneves will be joined at MSR by another Indy-winning Penske refugee, Simon Pagenaud. “We’re going to the Indy 500 double barrelled,” Shank says. “Between the two of them, I think we have a reasonable shot at finishing in the top five or six in the championship.”

With Tony Kanaan limited to an ovals-only schedule in 2022, Castroneves will be the last of the wave of great Brazilian drivers to hit Indy car in the 1990s still competing on a full-time basis. Twenty-three years after his first Indy car race, he remains as upbeat as ever. “The sky’s the limit,” he says.

And he’s willing to climb a fence to prove it.

Hélio Castroneves is nominated for entry into the Motor Sport Hall of Fame.
Vote below to choose who should join our gallery of the greats this year