Marshall Teague is famous for his ‘Fabulous Hudson Hornet’ that put NASCAR on the map and on a commercial footing in the early 1950s. 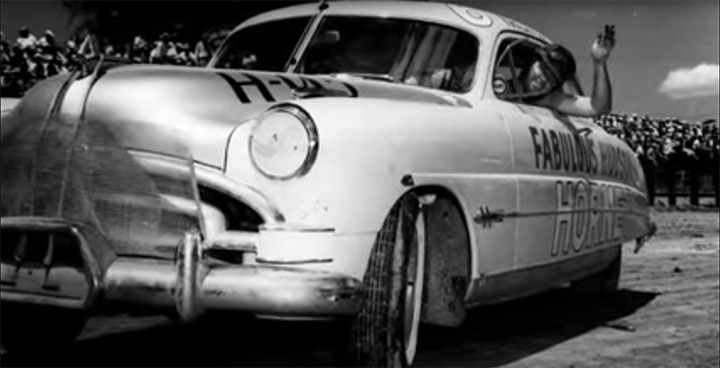 The Floridian master mechanic/racing driver was testing owner Chapman Root’s Kurtis-Kraft Sumar Special roadster in its streamlined Formule Libre guise – with fenders and cockpit canopy – when it got loose entering the west turn of the recently opened Daytona International Speedway. 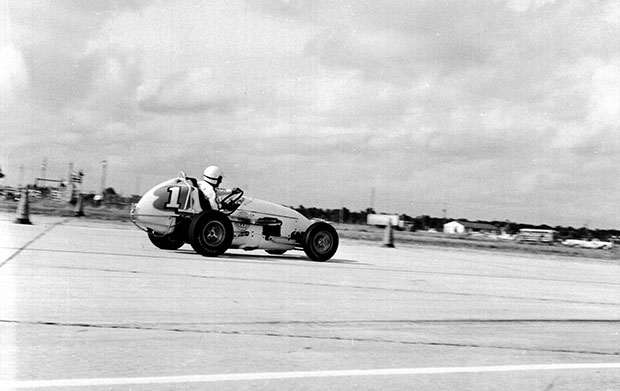 Its skinny tyres dug in and the handsome blue machine flipped five times. Teague, 37, was thrown clear but found dead, 150 feet further down the road, still strapped to his seat.

Two days previously he had set a US closed-course lap record of 171.821mph – 24mph faster than Indy’s best – yet claimed that “he was just playing around”: the car was undergeared and its chassis set-up unsuited to such high speeds.

After chief mechanic John Blouch raised its final drive and lowered the rear end (by 3in) overnight, Teague was confident of topping 180mph.

The world’s closed-course record at that time was Novi driver Tony Bettenhausen’s 177mph lap of Monza’s bankings at the 1957 Race of Two Worlds. 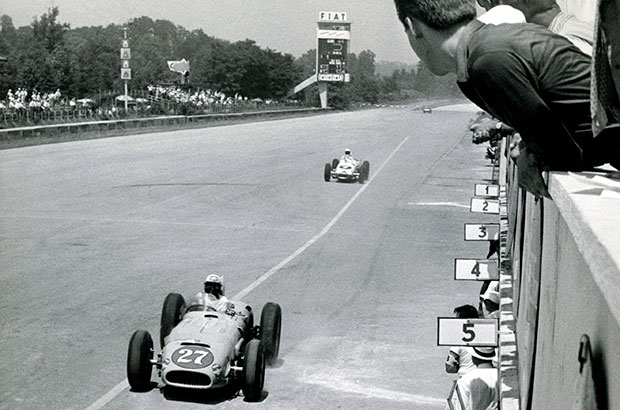 (Bettenhausen during the ’58 Monza race)

Teague, who reckoned Monza “a country road” compared to the smooth, wide Daytona “highway”, was still 7mph shy of this mark when a cut was spotted in the left-rear tyre.

That luck was soon to run out.

According to the Daytona Beach Morning Journal, his engine-builder Bill Cannons tried to persuade Teague to stop: “’Marshall, you’re not proving anything – why don’t you give up?’ But he wouldn’t hear of it.”

After two slow circuits under 130mph on Wednesday morning, he began to stretch the 400bhp machine. He was, however, 20mph short of its potential, and running in the middle of the track, when the accident occurred on the fourth lap.

Witnesses, including future multiple NASCAR Grand National Series champion Buck Baker, reckoned something must have failed on the $40,000 car. But USAC Chief Steward Harlan Fengler reported that its frame and wheels were intact.

Teague had experience of Championship Cars. He finished seventh, one place ahead of pole-sitting Sumar team-mate Pat O’Connor, at the 1957 Indy 500, and required 200 facial stitches after crashing in avoidance of a spinning rival at the Milwaukee Mile’s Rex Mays Classic of ‘54.

(The popular O’Connor would be killed in the first-lap accident that eliminated eight cars from the 1958 Indy 500.)

Teague had been a NASCAR pioneer and stalwart before his dispute with series boss Bill France Snr. Known as the ‘King of the Beach’ because of his victories on the sand of Daytona in 1949, ‘51 and ‘52, he scored seven NASCAR wins from 23 starts, including its first race west of the Mississippi, at Gardena in 1951.

Feeling constrained by NASCAR’s fierce protectionism, he switched to the rival series run by the American Automobile Association and won that title in 1952 and ’54.

He was, however, an even greater force outside the cockpit. His persuasive cold call at the Hudson Motor Car Company transformed the category – as did his breakthrough sponsorship deal with Pure Oil.

Hudson’s Hornet seemed an unlikely contender given its flat-head in-line ‘six’– but its lightweight unibody construction and ‘step down’ low centre of gravity, plus its accurate centre-point steering, caught Teague’s trained eye.

In conjunction with Daytona Beach neighbour and fellow garage owner ‘Smokey’ Yunick – for whom “cheating” was in fact a “creative form of self-defence” – Teague transformed this ‘upturned bathtub’ into a winning machine: 78 NASCAR victories out of a possible 149 in a four-season swathe.

The tuned ‘7-X’ version of its twin-carb 5-litre generated just 210bhp – up from the standard 145 – but this was sufficient for it to run rings around the V8 opposition on the mainly dirt ovals.

Midseason convert Herb Thomas made a successful late bid for the 1951 title. He also won it in 1953, and finished runner-up in ’52 and ’54.Fellow Hornet runner Tim Flock pipped him on the former occasion – when Hudsons won 27 of 34 – and Lee Petty, in Dodge and Chrysler, edged him on the latter.

(Thomas is said to be the inspiration for ‘Doc’ Hudson in Cars.)

Florida’s Dick Rathmann was another serial winner in Hornets: 13 victories over three seasons. Like Teague, he also drove Champ Cars. On pole at Indy in 1958, his collision with a sliding Ed Elisian triggered the accident that claimed O’Connor.

Driving the sister Sumar Special to Teague’s fated wreck, Rathmann also qualified on pole – at 173.21mph – for Daytona’s inaugural Champ Car race. He was beaten in the 100-miler, held on 4 April 1959, by the Watson of his brother Jim.

George Amick – Indy’s Rookie of the Year of 1958 – had recorded a 176mph lap in practice aboard his ‘lowbelly laydown’ Epperly roadster, but while battling for third place on the last lap of the 100-miler, he crashed exiting the west turn.

This second fatal accident convinced France that open-wheelers had no place at his tri-oval superspeedway and so these remain the last such races held there.