After months on the sidelines and in the virtual world, NASCAR became the first major racing series to return to the race track amidst the Covid-19 pandemic, staging two different races at Darlington Speedway.

Kevin Harvick took his first win of the 2020 season on Sunday, leading 159 laps on the way to victory, more than anyone else in the field.

Midweek racing has been touted as a potential way of spicing up the NASCAR calendar, and race two on Wednesday night had fireworks right to the end.

Having dominated the race and winning stages one and two, Clint Bowyer hit the outside wall and spun out of fourth place with 34 laps remaining.

It wasn’t the final twist either, as on the restart, the fight for the lead immediately spilled over. As Denny Hamlin led the field, Kyle Busch’s attempt to pass the leader didn’t pan out and allowed Chase Elliott to take second.

In trying to move back into line, Busch turned Elliott, putting the no9 driver into the inside wall and out of the race.

The Hendrick Motorsports driver made his feelings known after exiting his car, waiting for Busch to come round once more.

The race was red-flagged with 20 laps remaining with rain in the area and a fox venturing out onto the track during the stoppage.

With rain in the air, the race was called early and Hamlin declared the winner, scoring his second win of the year.

But it was another disappointment for Hendrick Motorsports, which endured a difficult afternoon on Sunday, having looked competitive from the green flag in race one..

Both Jimmie Johnson and William Byron’s races ended in the garage after mistakes on-track led to race-ending damage.

Johnson had been leading coming to the chequered flag at the end of stage one, but a spin into the inside wall ended his race early on.

Team-mate Byron won stage one as a result but was soon out of the race himself following his own error.

A brush with the wall resulted in a flat right rear and ended his hopes of a win. Harvick stayed out of trouble and finished 2sec clear of Alex Bowman for the victory.

NASCAR will have one weekend off before another two races take place in a short time frame, as the series heads to Charlotte for the Coca-Cola 600. 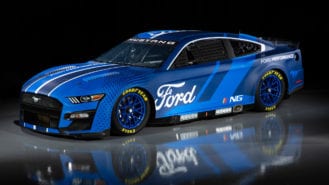