Why is Joey Logano so divisive? Samarth Kanal traces things back 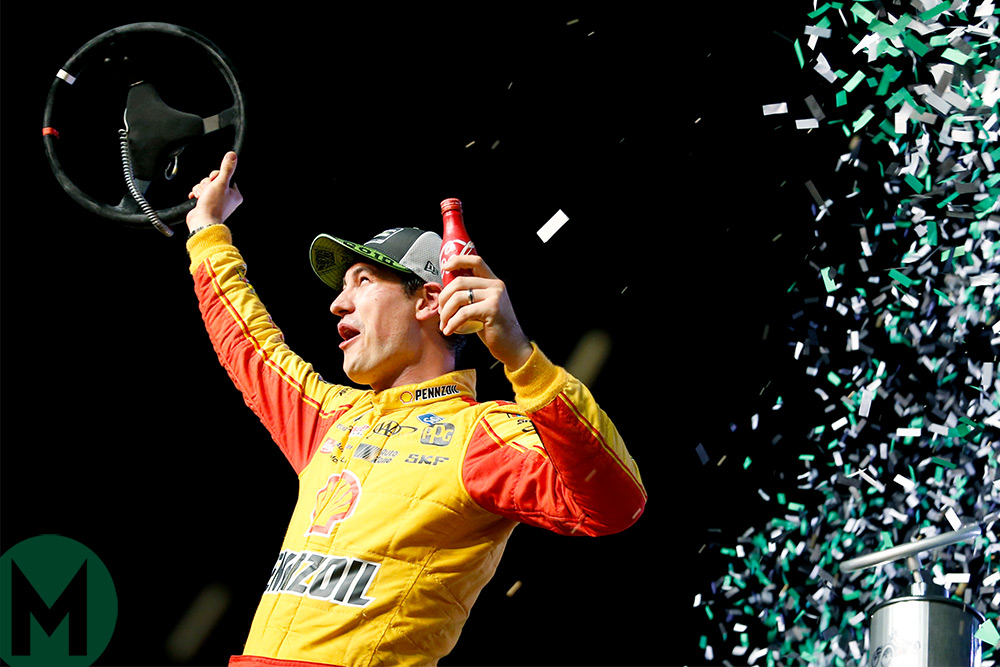 Since joining Team Penske in 2013 as Sam Hornish Jr’s replacement, Logano’s no22 has doled out its share of bumps and scrapes – and received quite a few in the process.

The driver himself has taken a few blows to the face, too.

It was at Daytona – Logano’s first race for Penske – in 2013 when JGR’s no11 driver Denny Hamlin and former team-mate Logano began their feud, colliding on the last lap.

Referring to Logano, Hamlin tweeted to fourth place finisher Brad Keselowski: “Sorry I couldn’t get close to you cuz [sic] your genius team-mate was too busy messing up the inside line one move at a time.”

And Logano replied without a hint of diplomacy: “We’ve got a freaking genius behind the wheel of the 11 car. Probably the worst team-mate I’ve ever had. So I learn that now. He chose to run into the back of me. So whatever. I have a scorecard. I ain’t putting up with that. … I ain’t getting run over and not doing something about it.

“I never did anything wrong in Daytona,” continued Logano post-race. “No, I think it’s just [Hamlin] driving like an idiot. That’s all…”

And the seeds of discontent in the JGR ranks were sown.

At Bristol Motor Speedway, in March that same year, Hamlin spun Logano and the no22 driver stormed into the pitlane after the race, thrusting his head into Hamlin’s car to speak his mind while the two teams caused a minor scuffle.

Logano later tweeted: “Hey [Denny] great job protecting that genius brain of yours by keeping your helmet on.”

Tensions reached a boiling point between the two the following week at Fontana, and Hamlin came away with a lower-back fracture as the pair crashed on the last lap again.

Unaware of Hamlin’s injury, Logano said post-race: “After what happened [at Bristol], that’s what [Hamlin] gets. We have nothing to hang our heads about, that’s for sure.”

The following season was Logano’s breakthrough as he scored five wins in 2014, and he signed a multi-year deal with Team Penske. Clearly, Roger Penske saw championship material in Logano. It was a matter of when, not if.

Logano won the Daytona 500, having pried Stewart Haas Racing’s Kevin Harvick from the lead with a couple of laps remaining. The two crews confronted each other in the pitlane after Harvick slammed into Logano’s door on the cooldown lap.

Young no22 driver was running out of friends on track.

“The karma train is coming after you,” said Harvick to Logano in that pitlane scuffle at Daytona. Perhaps he had a point.

But Logano kept using his bumper to power his way to championship contention, and in the crucial Kansas race in October 2015 he spun Matt Kenseth out of the lead. This is behaviour that NASCAR encourages with its all-or-nothing Playoff format, and Logano needed that win to progress. But Kenseth was out of the Playoffs, and his only game was to stop Logano.

So come Martinsville, in the final round of the Playoffs that would decide the final four title contenders, Kenseth spun out courtesy of Team Penske’s Keselowski and decided – in a fit of rage – to weaponise his car. As leader Logano passed the stricken no20 of Kenseth, his car was slammed into the outside wall of the short-track. It was ugly.

The race was red-flagged, Kenseth was black-flagged and later suspended for two races.

“I think what happened at Kansas is a completely different deal,” Logano said at Martinsville. “Here, it was just a complete coward move, especially for a championship race car driver and race team.

“[Kenseth is] just a complete coward. I don’t have anything else to say. It’s a chicken-you-know-what move to completely take out the leader when your race is over.”

That was Logano’s championship bout all but done. He needed a win to advance to the final but only managed third in a controversial storm-hit race at Phoenix in November.

A series of punctures and crashes, and even a car jack caught under Logano’s wheel, meant that 2016 got off to a comically bad start. But he persevered to reach the Playoff final, only to tangle with JGR driver Carl Edwards in the finale at Homestead-Miami that year. Jimmie Johnson won, but it was Coach Gibbs’ cars that remained the bane of Logano.

Maybe, just maybe, things were finally patched up with Gibbs and his four drivers. Daniel Suárez (Carl Edwards’ replacement) and Logano at least seemed to be on friendly terms and Logano hadn’t stoked the ire of any JGR drivers in 2017.

Until Las Vegas in March, when Kyle Busch marched up to Logano in the pitlane and punched him in the face after the pair crashed with a few laps remaining. Logano just couldn’t keep up with the JGR four and satellite driver Martin Truex Jr that year, the latter claiming the overall championship.

Truex was vying for another championship this season. Once destined for mediocrity, his Furniture Row Racing team capitalised on its alliance with JGR to win 2017’s championship. The team, struggling for sponsorship, announced that it would fold after 2018 and Truex wanted a glorious send-off for his crew.

But Logano was hungry for a maiden title. Kenseth had cost him dearly in 2015, and he was agonisingly close the following year. The ‘17 season was an infuriating one, including a win that was struck off at Richmond for an illegal rear suspension set-up.

Busch, Truex and Harvick were billed as the ‘big three’ in the run-up to the championship finale at Miami this year. Until 2018, however, only Truex hadn’t had a serious altercation with Logano. That was all to change.

When it came to the Playoff race at Martinsville this season, scene of Kenseth and Logano’s feud in 2015, remember, the no22 driver wasn’t pulling any punches. With a few laps to go, he used his bumper to shove Truex away from first place and the pair tangled all the way to the finish line, with Logano just in front in an incredible finish.

Truex threatened a Kenseth-style retaliation: “He won the battle but he ain’t winning the damn war,” Truex declared. “That’s it. I’m just not going to let him win it, I’m going to win it.”

The no78 driver reiterated his promise when it came to the final at Miami: “[The] no22 [Logano] in front of me? He’s going… eye for an eye. That’s how he did me [at Martinsville], that’s how I’ll do him.”

But Logano swept past the inside of Truex so quickly that there was no time for the two to crash. This was it, Logano’s first championship.

Were fans happy? Not for the most part. Many accused his team-mate Keselowski for instigating contact that brought out a caution with 15 laps remaining. And many recalled the numerous times that Logano had an altercation with their favourite driver.

The season may be over, but Logano took to social media to post a photograph of him, the trophy and his wife captioned: “The Big 3”. Ever the antagonist, Logano snatched this championship away from the angry veterans looming over him.

With Truex moving to JGR next season alongside Busch and Hamlin, these past few seasons of fights and feuds involving new champion Logano are only the calm before the storm.