Congratulations to Alex Rossi: the ninth rookie winner from 100 runnings of the Indianapolis 500.

Successful in Formula BMW, GP3, Formula Renault 3.5 and GP2, this Californian would rather have been in Monte Carlo last weekend, but at least now he’s achieved something that even the great Dan Gurney could not.

And we can assume, therefore, that his attitude towards ovals has softened a little.

Of those victorious rookies – four Americans, two Frenchmen, a Brit, a Colombian and a Brazilian – only one was younger than Rossi. And that man is the most mythic figure of American motorsport: Frank Stallworth Lockhart had just turned 23 when he won Indy, 90 years ago.

Unlike Rossi, he wasn’t guaranteed a seat. His ‘deal’ was this: help prepare and run Bennett Hill’s car in the hope of acting as his relief driver during the race. The latter role was thankless – Google ‘Cyrus Patschke’ to see what I mean – but Lockhart was fiercely ambitious. 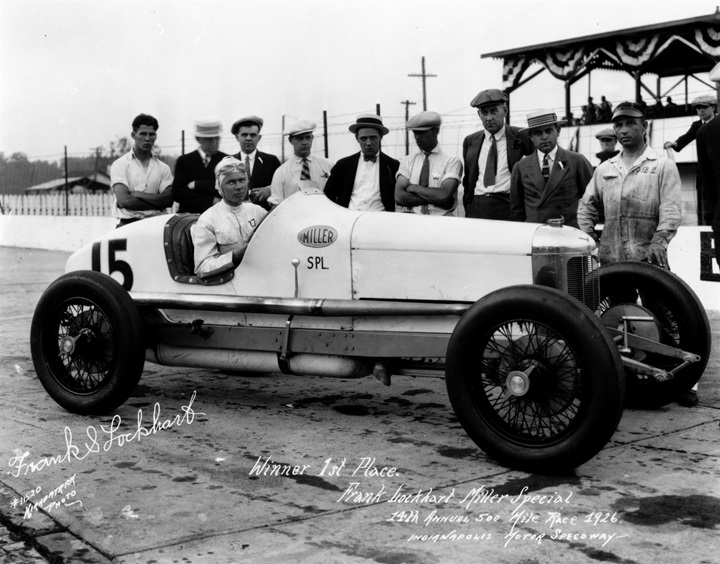 He was also fabulously talented and fantastically quick.

His first official flying lap in a supercharged 1.5-litre Miller single-seater – the world’s most advanced racing car at the time – set a new lap record.

A fearless dirt-track skidder in skinny Fronty-Fords, Lockhart was more considered on his next qualifying run yet was thwarted by engine failure.

His last – three strikes and you were out – was understandably pedestrian and good enough: he would start 20th of 28.

Lockhart had been in the right place at the right time when wealthy and popular Pete Kreis of Tennessee caught influenza and had to give up his ride: “Give it the kid!”

The rest of what happened, however, owed nothing to good fortune.

Lockhart made blistering progress and was running second by lap 16 – and took the lead when Dave Lewis pitted after 59 laps.

He held his nerve thereafter, even during a one-hour delay for rain – the first such interruption in the race’s history – to be leading still when the chequered flag was thrown early, after 160 laps, with the return of wet weather.

Only Harry Hartz had run ahead of him, but even this experienced Indy competitor was roundly upstaged, fluffing a pit stop and finishing second – for the third time in five years – by more than two laps.

Lockhart had arrived as an illiterate – the old ‘term’ for dyslexia – kid from a single-parent family: the original SoCal hot-rodder. He left as an Establishment superstar. 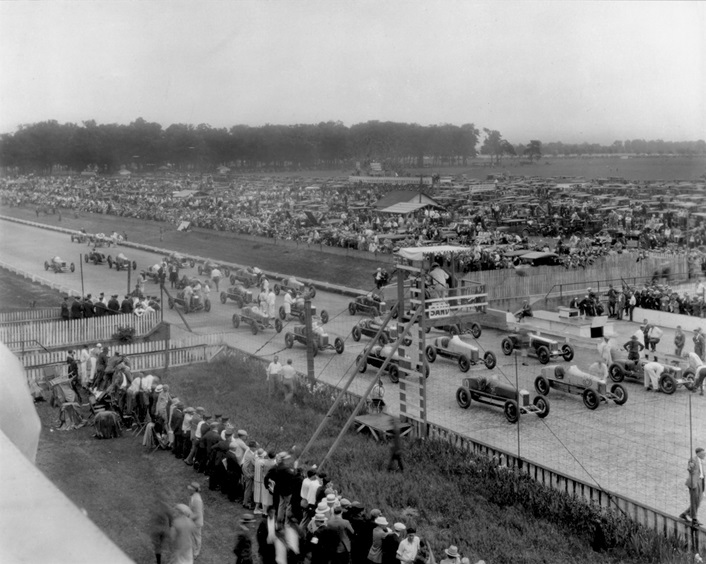 Charles Lindbergh would have to fly solo across the Atlantic in May 1927 to top him in the fame-and-daring stakes.

Born in Ohio in 1903, Lockhart’s family upped sticks to California when he was 10. A bust at school, he possessed a natural feel for and understanding of engineering and streamlining that impressed Harold Arminius ‘Father’ Miller, the LA-based creative guru genius of this burgeoning sport.

Although their partnership soon hit the rocks when Lockhart’s ‘tinkering’ began to improve on the unimprovable. There’s an intercooler patent out there with his name on it.

Lockhart the driver, meanwhile, went on a tear after Indy and won seven more races, on dirt and board ovals, and finished second in the national championship.

Unquestionably, he had become his country’s most committed and exciting racer.

He began his 1927 Triple-A campaign with three consecutive pole positions. The first of them was a 144mph lap of LA County’s Culver City Speedway. The second was an astounding 147.7mph at the 1.5-mile Atlantic City Speedway – a mark not beaten at any American circuit for 33 years.

All of this was achieved in a car supposedly slower than its low-slung front-wheel-drive rivals, also designed by Miller.

His two performances on the bricks, where he led 205 of his 280 laps – a record 73 per cent – undoubtedly made his name and provided solidity to his legacy. 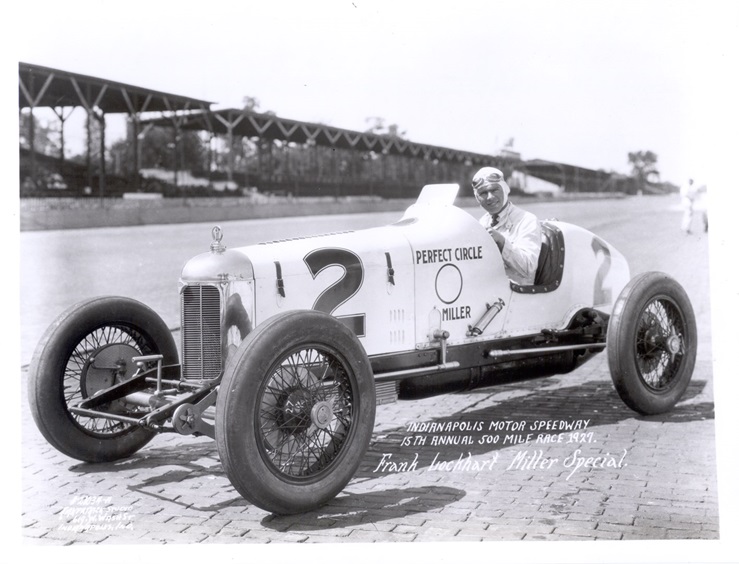 But his performances on wooden board tracks were a truer reflection of his career: they sprung from the ground and grabbed an awed public’s attention briefly but brilliantly before returning to the soil.

Atlantic City Speedway was 50-feet wide, banked at 45 degrees and constructed from 4.5 million feet of timber. Yet it went up in a matter of months.

Lockhart was beguilingly ephemeral, too.

He excelled in competition – winning seven times in 1927, he again finished runner-up in the points – but preferred the purist’s thrill of speed.

And he ploughed his winnings into its attainment.

In April 1927, his open-wheeled single-seater topped 171mph at Muroc Dry Lake, now Edwards Airforce Base. This was a fortnight after Henry Segrave had set a new Land Speed Record of 203mph in the streamlined 1000-Horsepower Sunbeam of 30 times the engine capacity.

A seed has been sown.

With financial and technical support from Stutz Motor Co. of Indianapolis, plus help from brothers Zenas and John Wiesel, graduates of Berkeley and Caltech, Lockhart, working in great secrecy and often through the night, designed and, in three hectic winter months, built an LSR challenger of breathtaking beauty and remarkable prescience.

Stutz Black Hawk was a Colt revolver in a world of blunderbusses.

Just 16ft long, its body was not much wider than its frail 5ft 3in driver and its wheels enclosed by tightly fitting spats.

It was powered by a 3-litre U16 consisting of a pair of modified Miller twin-cam straight-eights mounted at a 30-degree included angle on a common crankcase containing two cranks geared together by a central pinion.

Cooled by ice and ribbed intercoolers almost flush with the scuttle, and boosted by twin centrifugal superchargers running at five times engine speed, estimations of this engine’s output vary wildly – but its banshee song remains beyond doubt.

Wind tunnel tests assessed the package as being good for 280mph.

Wind and rain were not its friends, however, and Lockhart did not want to run at an inclement Daytona Beach, the surging February surf and swirling sea fret encroaching on the already startlingly narrow course.

But he felt obliged. For the financial tide was turning.

It was a decision that almost killed him, a soft patch of sand unsettling his lightweight device and sending it skimming and somersaulting into the ocean.

Lockhart was relatively unhurt but trapped within his deformed cockpit and had to be sheltered from waves by rescuers while others dragged the car onto dry land.

Both man and machine repaired remarkably quickly and returned in April.

That warning, however, should have been heeded.

Lockhart warmed up with 198mph through the flying mile – a capacity class record not bettered until 1960 – and clocked 203mph on his first pass proper.

He then made another dubious decision. And this time he wouldn’t live to regret it.

Having since February switched from Firestone to less proven tyres purely for the money, he ordered a cursory check at the turnaround. The wind was in his sails – and favour – and the removal of those spats was a time-consuming operation.

On his return run, just moments before 8am and a few hundred feet short of the finish, he began a series of tumbles at an estimated 220mph. Officials stood transfixed as the disintegrating Black Hawk flew between and over them.

Its dissipating violence’s most cruel act was to hurl Lockhart’s rag doll body 50 feet beyond the steaming, hissing wreckage.

Gouges in the sand indicated that the right rear tyre, perhaps cut by a shell when its overanxious driver locked the brakes at the end of the outward run, had failed.

Then the tide rolled in. And out.

And a rough footpath through a tumbling wood in New Jersey marks the increasingly indistinct footprint of a track once famous but now forgotten by all but a few.

Just Nature reclaiming one of its forces.