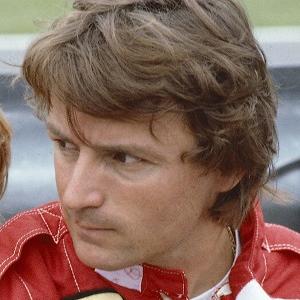 The René Arnoux of the early-1980s was one of the fastest Formula 1 drivers of his generation – as quick over a single lap as anyone and a potential World Champion in the making. He won seven of the 149 Grands Prix he started but by the time he retired from the sport, Arnoux was a liability who was as likely to obstruct faster cars as to score a championship point.

Shy and withdrawn in a sport full of extroverts, Arnoux won the European Formula Renault Championship in 1973 and 1975 with a works Martini. He also made his Formula 2 debut at Vallelunga in 1974 driving an Elf Alpine A367-BMW and graduated to the series on a fulltime basis in 1976 with a Martini MK19-Renault.

Despite being in his first full season, Arnoux pushed Jean-Pierre Jabouille all year, won three times and eventually finished as runner-up just a point behind his more experience compatriot. Arnoux remained with the Hugues de Chaunac-managed squad for 1977 and led the European F2 Championship throughout the season.

F2 Champion with a round to spare, he graduated to F1 in 1978 with de Chaunac’s unique Martini MK23-Ford. He did well to twice finish ninth for the French minnows and also impressed in two end-of-season appearances with Surtees. That, and his F2 performances, attracted the attention of Renault and he signed with the turbo pioneers in 1979 for his first full season.

It took a brave man to tame the raw power of the Renault RE10 and Arnoux was certainly that. He battled wheel-to-wheel with Gilles Villeneuve during the closing laps in France (when third), finished second in Britain and the United States and recorded back-to-back pole positions in Austria and Holland.

His reputation as among the quickest in F1 was confirmed by early season victories in the 1980 Brazilian and South African GPs. But it was in qualifying that Arnoux was the star – three consecutive poles that year, another four during 1981 and five in 1982 emphasised his prowess over a single lap.

While Arnoux’s outright pace was not in doubt, both he and new team-mate Alain Prost suffered wretched mechanical reliability that thwarted any championship pretensions. Arnoux’s Renault held together long enough to lead a French 1-2-3-4 in their 1982 home race but that was a controversial day for Arnoux disobeyed team orders by refusing to let the better-placed championship contender Prost to pass.

His Renault career was effectively over and he was soon announced as a Ferrari driver. Arnoux responded by winning the 1982 Italian GP in what was his final victory for Renault. The Tifosi celebrated as if it was a red car taking the flag.

The Ferrari years and Formula 1 decline

He was a championship contender in 1983 but lost out to Nelson Piquet and Prost after spinning at the penultimate round at Brands Hatch. But without a win or pole position in 1984, Arnoux was fired by Ferrari after the 1985 Brazilian GP, a race in which he charged through the field to finish fourth.

After almost a year away, he returned to race a Ligier for the next four seasons. There were days of his old self (running with the leaders in Detroit 1986) and controversy (his outspoken views regarding new engine partner Alfa Romeo in 1987 prompted the Italian concern to cancel its contract with Ligier before the season). But increasingly, his were wayward performances that attracted criticism from concerned fellow drivers.

When he retired at the end of 1989 it was easy to forget the potential superstar who had starred a decade earlier. An early Autosport review of René’s style described him thus: “Arnoux is what the purists would call a real racer. He will go right from the start, head bowed forward, grim determination. All he wanted was to win.”

René Arnoux remains among the fastest men to have started a GP – his seven victories and especially 18 pole positions stand testament to a natural talent. But it is a reputation tarnished by that unhappy return with Ligier.