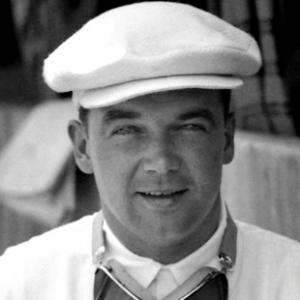 Rudi Caracciola, or “Caratsch,” was the most successful Grand Prix driver of the years immediately before World War I. Forever linked with Mercedes-Benz, he dominated when the marque returned to the sport in the mid 1930s but Caracciola’s life was also touched by tragedy.

Of Sicilian descent and the son of a hotel owner who was also a wine merchant, the young Caracciola worked for the Fafnir Car Company as an apprentice until a drunken fight with a Belgian army officer. For fear of reprisals, the youngster moved to Dresden in the East where he worked in Fafnir’s showroom.

It was in one of the company’s 1500cc machines that he finished fourth on his car racing debut at Avus in 1922. His first association with Mercedes was as a salesman in Dresden and he started competing with a borrowed Merc on hillclimbs and trials from 1923. He was a race winner on both two- and four-wheels for the next few seasons before dedicating his future to cars from 1926.

That year’s inaugural German GP was held amid unrelenting rain on Berlin’s Avus circuit. Caracciola drove a 2-litre Mercedes M72/94 borrowed from the factory and scored his breakthrough victory despite stalling at the start. The 17,000DM prize money was not only his first big payday but was enough to allow him to marry.

He won the race again in 1928 (now held at the Nürburgring) and was third in the first Monaco GP a year later driving the cumbersome Mercedes-Benz SSK. Victory in the 1929 Tourist Trophy on Ulster’s Ards course was his first major overseas win – again achieved in the wet.

Winner of the 1930 and 1931 European Hillclimb Championship in the sports car class, Caracciola’s victory in the Mille Miglia that second year established him as a star across the continent – and made him the first foreigner to win Italy’s great road race. By now, he was running a semi-works Mercedes SSKL as the worsening economic climate had forced the factory to withdraw official backing.

Despite his success, Mercedes was eventually forced to quit racing completely so Caracciola joined Alfa Romeo in 1932, his car painted white for much of the year – the national racing colour of Germany. A third German GP win and the outright European Hillclimb title were the highlights of a season marred by team orders and the jealousy of some of his Italian team-mates.

He formed Scuderia CC with Louis Chiron for the following season but the venture was short-lived. The German crashed at the Chicane during practice at Monaco and broke his thigh so badly that he nearly lost his right leg. Worse was to come while convalescing at their Swiss house at Arosa for his wife Charly was killed on February 2 1934 when swept away by an avalanche while ski-ing.

Caracciola hit the depths of depression to the extent that friends feared for him and believed that he would not race again. But a rousing ovation when guest of honour at Monaco that year, and perhaps his ever-closer friendship with Alice “Baby” Hoffmann (Chiron’s partner at the time) helped him start living again.

Chiron had made it clear that he was not going to marry Alice despite her asking on more than one occasion. After another rebuff, she accepted Rudi’s proposal in 1937 and they were married in Lugano. By which time Caracciola was once more Europe’s leading driver with the Mercedes-Benz “Silver Arrows”.

The return of Mercedes-Benz

Walking with a pronounced limp and still recovering from his injuries, Caracciola returned with the new Mercedes-Benz W25 in 1934. He led the German GP and shared victory with Luigi Fagioli in the Italian GP but that was merely the prelude to his most successful season so far.
He won six of his 11 races during 1935 after spirited duels with disobedient team-mate Fagioli and Auto Union’s brilliant newcomer Bernd Rosemeyer. Caracciola completed his resurgence by being declared European Champion for 1935.

The 1936 Mercedes was disappointing and although he won in the Monaco rain, Caracciola was generally outpaced by Rosemeyer. The next two seasons were Caracciola’s however – winning another six major races and the European Championship in 1937 and 1938. His 1938 Swiss GP was one of his finest and was again run in a downpour. Caracciola’s prowess in the rain earned him the nickname of Regenmeister or “rain master”.

He also set a new world record speed for the flying mile at an average of 268mph. His rivalry with Rosemeyer was classic motor racing theatre – the old master challenged by a carefree young challenger. They were head-to-head for another speed record attempt on the Darmstadt motorway when Rosemeyer was killed on January 28 1938. Caracciola’s old injuries and advancing years were taking their toll but he still won a sixth German GP in 1939.

The Caracciolas spent World War II in Switzerland during which time he took Swiss nationality and allegedly displayed a BRDC badge on the front of his car throughout.

He tried to race again after the war but suffered severe head injuries while practising for the 1946 Indianapolis 500. He successfully recuperated in Lugano once more only to injure his left leg when his Mercedes 300SL sports car crashed into a Bremgarten tree in 1952. He spent the next eight months in traction and any thought of another comeback was ended by his latest injuries.

His health began to fade and the greatest of “The Titans” finally succumbed to cancer when just 58 years old. That he dominated when Rosemeyer and Tazio Nuvolari counted among his rivals means that Rudolf Caracciola ranks among the very best.