Passing San Lorenzo, the famous restaurant, the other week, I was reminded of a pleasant lunch there, years ago, with a charming American lady: Louise Collins, widow of Peter. She had been to Silverstone a few days earlier and had not really known what to expect, inevitably wondering if it would spark memories of another time.

“When Peter won the British Grand Prix in 1958, it was a perfect day. The weather was great and Silverstone had an English garden party atmosphere. He took the lead from Stirling at the start and led all the way. Wonderful.”

Now, though, Silverstone triggered nothing in her mind. “It was fun, but it was like a whole different place. I always sat on the pit counter, and did my lap chart, and the cars were right there in front of you; now there’s this wall between the pits and the track.”

At Silverstone there had been a party celebrating the publication of Chris Nixon’s biography of Collins and Mike Hawthorn. These days Louise lives in Connecticut, and the book had caused quite a stir when one day she took it to work. Not all her colleagues appreciated she had been married to a great racing driver — nor been a Broadway star, in her maiden name of Louise King.

“I was in The Seven Year Itch with Tom Ewell, who had made the movie with Marilyn Monroe. Theatre was always my first love — in fact, I turned down a Hollywood contract because it would have precluded stage work. About a year later I met Peter, and a week after that we were married.”

At once, Louise was pitched into a new way of life, and she embraced it. “It really wasn’t that different, in many ways. I’d toured with different plays, and those circumstances lead to instant friendships, if you like, so I was used to that kind of thing — accepting a new family.”

At the time her husband was Ferrari’s number one driver, and very much his favourite. “Ferrari looked upon him as a kind of surrogate son,” she said, “and it was the same with Laura — Mrs Ferrari, that is. They had lost their only son, Dino, and they kind of adopted Peter.

“Ferrari always seemed a tragic character to me. And Laura — there was one powerful woman! There was something sinister about her, and she was very heavy going. She was kindly to me, but I never saw any humour at all. She always wore black, very forbidding, and she and Ferrari went to the cemetery every day.

I don’t mean to sound hard, but it struck me as very theatrical somehow. Losing their son understandably clouded them, but there seemed no end to it. Eventually Peter went to see Ferrari and, in effect, told him to snap out of it. It made him angry that he was neglecting the factory, spending so much time in this mourning.

“People couldn’t believe anyone would have the guts to say something like that to Ferrari, but he accepted it, and was much brighter after that. It was around then he loaned us a villa near Modena. And he got involved with quite a few younger people at the same time…”

Louise chuckled at the memory. It was always said, after all, that Ferrari pursued the ladies at least as fervently as grand prix victories.

“I knew things had changed one day when I was driving through Modena. There was Laura in a polkadot dress! And that was about the time we heard Ferrari was keeping this girl in Florence or some place. She had been Luigi Musso’s girlfriend.” 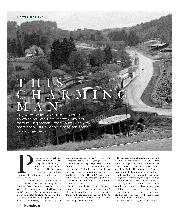 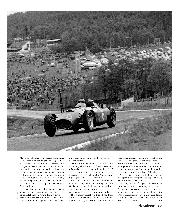 Peter Collins was the debonair embodiment of the 1950s racing driver, a man of good looks and charm and wit. Born in 1931, he missed the war; with half a…

Musso was killed in a Ferrari in 1958. It was a time when deaths in racing were commonplace and friendships between drivers were real. Feuds are common today, but Louise recalled nothing like that in the ’50s.

“I think drivers respected each other too much for any of that stuff. There was etiquette, rules by which they played. Once in a while they would get angry with a young hotshot who thought he knew it all, and they’d talk to him in private. There was this feeling they were all doing something they loved, and weren’t they lucky. Everyone was on the same side.

“There was a feeling that racing was quite dangerous enough, without people being crazy. It’s odd what the mind can do. There were a lot of bad accidents, but afterwards there was always this justification, a reason why it could never happen to anyone else. I remember one time Peter started to say something about, ‘If anything ever happens to me’, and I said, ‘Oh, shush!”

Much has been written of the friendship between Collins and Hawthorn, which in fact was strong only for the last couple of years of their lives. No one to whom I have spoken about Peter remembers him with anything other than fondness, but this is not necessarily the case with Mike.

“Put in black and white, they might look like extremes,” Louise said. “Very different types. Maybe that was why they got on so well. When the three of us were together, Michael was usually much calmer. If he was fed up with the outside world, maybe he found us a kind of refuge. He could be incredibly rude sometimes, but he never was to me. I liked him a great deal.

“We spent a lot of time together, but only at races, really. Mike liked to get back to England as soon as possible, whereas in ’58 Peter and I lived on a boat in Monte Carlo. I never felt Mike was infringing in our lives.”

A fortnight after his British GP win, Collins was killed at the Nürburgring. Fighting for the lead, Peter was running between Tony Brooks’ Vanwall and the other Ferrari of Hawthorn; at Pflanzgarten he got slightly off line and went off the road.

“After Peter died, Mike brought me back to England. I did very well through the funeral, but at the memorial service I saw Mike at the door of the church, and it really got to me. I wept through the whole thing.

“We met again at Monza. Maybe it seems odd I went to a race again, two months after Peter’s death, but Ferrari begged me, and said he would go with me. I don’t believe he had any intention of going — and he didn’t! But it was good he tricked me, because although it wasn’t a great weekend, it was important to see my friends. When you lose someone, what’s really difficult is to do the things you did before, but without them.

“At Monza I remember having a long talk with Mike, way into the night. But everything was different with Peter gone. Our friendship had been based so much on racing, but now I wasn’t a driver’s wife anymore; I was going off to be an actress again.”

Louise remembered her time with Peter as the happiest of her life, speaking of its brevity without bitterness. I told her something of motor racing now. ‘These days,” I said, “your biggest rival is often your own team-mate.” She gasped. “Are you serious? Well, that’s unbelievable. The important thing to Peter was that a Ferrari driver should win. He’d get angry if his car broke, but much less so if one of his team-mates won.”

Late in the 1956 Italian Grand Prix her husband handed over his car to Fangio, enabling him to win his fourth world championship. In so doing, he gave up the title himself.

“In those days there wasn’t the money, so maybe it was easier to be a sportsman. But Peter revered Fangio and never felt there was much urgency about winning the title. He cared more about winning races. Team spirit was very important to him — if he hadn’t enjoyed racing, it wouldn’t have been worth a damn to him. It was important, above all, that someone in a Ferrari won the championship.

“Probably, that doesn’t make sense to anyone today,” she said, “but, my God, I’m glad I had the joy of racing back then.”