Eddie Lawson’s 1989 Honda NSR500 roars back into life, with Cal Crutchlow on board, during Honda’s 2019 Thanks Day 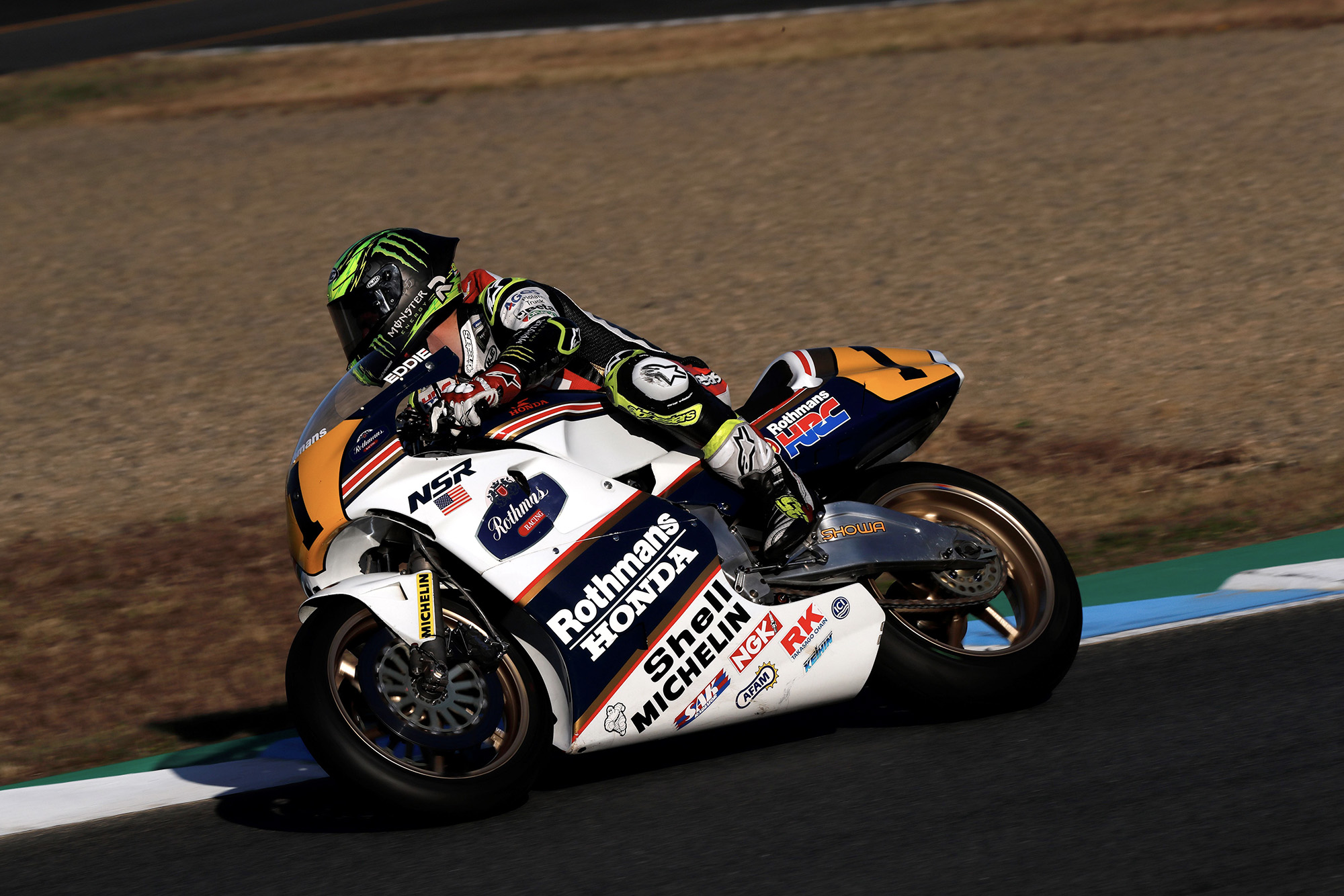 Crutchlow on the NSR500

Every year in November, Honda calls its racing teams back to Japan for a free day-long spectacle of its drivers, riders and racing machines.

The Honda Thanks day brings together MotoGP, Formula 1, IndyCar, Super GT and Super Formula cars on the Twin Ring Motegi track, along with a selection of its historic models.

Last weekend, three-time MotoGP race winner Cal Crutchlow probably had more fun than anyone else because he fulfilled a lifelong dream: riding a 500cc Grand Prix bike around a race track for the first time.

Crutchlow was just four years old when Eddie Lawson won the 1989 500cc World Championship aboard his Honda NSR500, an early version of the bike that went on to become the most successful premier-class Grand Prix machine of all time, with 132 victories between 1984 and 2001.

American Lawson won four Grands Prix during 1989. The most successful NSR500 rider of all was Australian Mick Doohan, who won 54 GPs between 1990 and 1998. 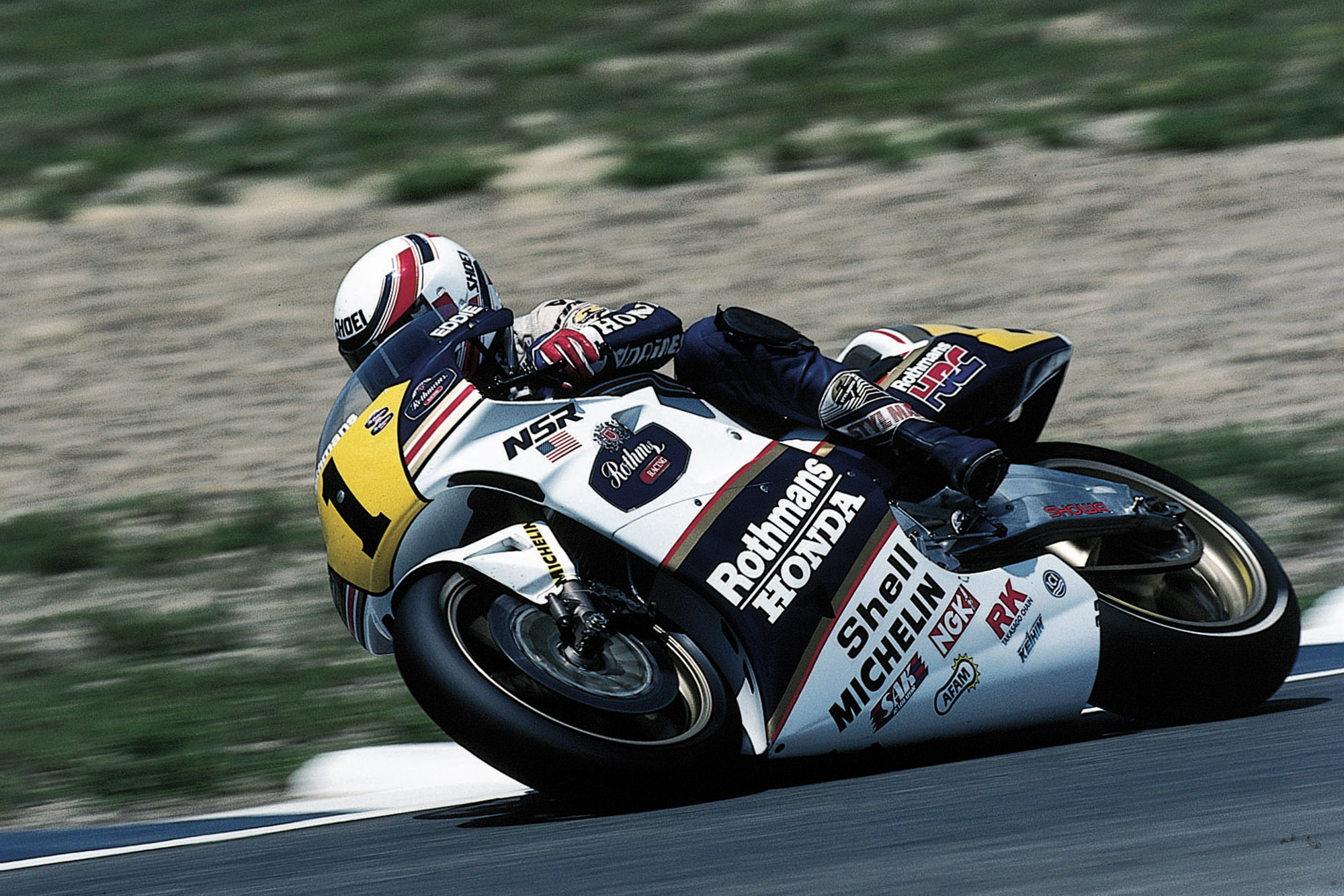 The 500 two-strokes of the late 1980s were renowned for their intimidating performance: 170 horsepower delivered to the rear tyre with a spine-tingling exhaust note and via a precipitous powerband, with no traction control to keep the rider safe.

“It was incredible and a real privilege to ride an NSR!” said Crutchlow after his ride around Twin Ring Motegi in glorious autumnal sunshine. “I started watching racing in the Doohan era. I always liked watching Mick with his special riding style and his recoveries and comebacks. I was always a Honda fan as well as a racing fan, so it’s worked out great. Being able to ride an NSR500 around such a great circuit like Motegi is an incredible moment of my career.

“I daren’t open the throttle too much, to be honest”

“The bike is something completely different to what I’m used to. When I used to watch those guys who used to race 500s I used to think the bikes looked spectacular and now I know they are spectacular! What they used to do on those machines was incredible. It’s a real privilege to be able to ride it.”

The Honda RC213V that Crutchlow rides now produces more than 250 horsepower, so the power of the 1989 NSR didn’t surprise him, but the way the engine produces that power did.

“The 500 is really difficult to control, really difficult to control,” he added. “Coming out of the last turn, or coming out the hairpin here, the front wheel really comes up fast, so you have to use the rear brake a lot to keep the front down. Our bikes have got electronics [to reduce wheelies], so if we want to do wheelies we reduce the electronics.

“I know everyone talks about the powerband of the two-strokes, but you just have nothing! I daren’t open the throttle too much, to be honest. Around Turns One and Two, the double apex right-hander, I could feel myself feeling a little bit more confident, but I wasn’t riding it like those guys used to race them.

“They didn’t even have quick-shifters, so back then you really had to think about it – about how you release the clutch and about how you change up the gears and down the gears. It’s something very, very special.

“When you ride this bike you realise that we take for granted what we have now. The way you have to ride the 1989 NSR, it’s like riding a motocross bike because you do everything manually, everything is in your hand. It’s a strange feeling but fantastic. The bike was fantastic – fast, comfortable – but I can’t imagine racing one in 1989!” 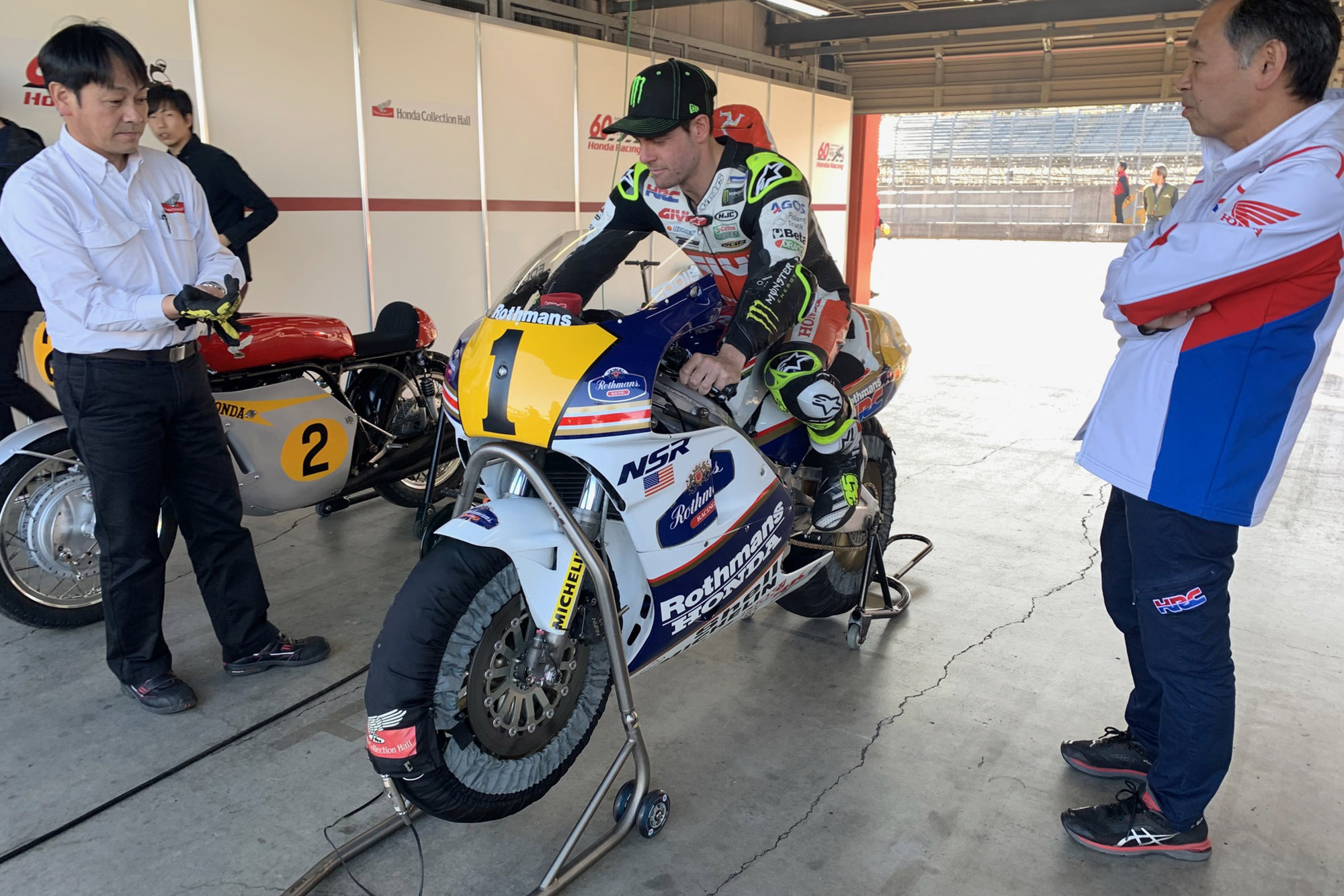 The 500 two-strokes were the pinnacle of motorcycle racing until the larger-capacity MotoGP bikes arrived in 2002, but the development of engines, chassis, tyres and electronics has been so fast that Moto2 bikes – powered by Honda CBR600 streetbike engines – were lapping faster than the 500s in 2010.

“This is the Honda Racing Thanks Day and that’s what we’re here for – to say thanks to all the fans around the world that support Honda and support us in MotoGP,” said Crutchlow. “It’s a great privilege to come here – it’s great to see the all fans and everybody that works at Honda and at HRC. As riders and drivers we have to say thanks because they make all this possible.”