Dakar has taken its first steps in the plan for its entire field and infrastructure to eventually be powered by renewable energy sources with a successful test of the all-electric GCK e-Blast 1 Dakar rally car and the launch of a ‘green bivouac’.

After announcing plans in November to run an all electric car on parts of this year’s Dakar course, with the eventual aim of evolving the vehicle into hydrogen-powered challenger for the 2024 event, the e-Blast’s first iteration has now had its first taste of real off-road running.

Housed in a chassis based on the 2018 Dakar-winning Peugeot 3008 DKR, its electric powertrain and battery generates 250kW of power, equivalent to 340bhp, with 1,000NM of torque enabling the car to haul itself over the steepest dunes.

The e-Blast 1 was run on the formidably rough terrain surrounding the planned eco-city of NEOM, prior to the Dakar 2021 rally entourage arriving.

In addition to the NEOM test, the e-Blast 1 is due to compete in other cross-country events in 2021.

The primary aim of the test was to gather data, test components and optimise software for the eventual evolution of the e-Blast 1 into the hybrid electric/hyrodgen-powered e-Blast H2, which GCK hopes will take on Dakar in 2024. 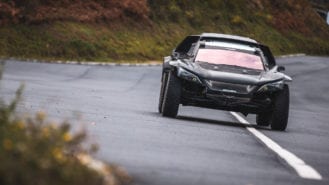 The ASO says it aims for all vehicles entered in Dakar to be powered by green energy by 2030.

GCK has also been tasked by ASO to help power its green revolution, with the event aiming to be completely powered by renewable energy by 2024. During the NEOM stage a ‘green bivouac’ was installed by the renewable energy company as an initial demonstration of intent.

Described by GCK as ‘bespoke mobile photovoltaic solution’, 630 solar panels over 1200m2 produced between 1.2 Megawatts (MW) a day, helping to power the media centre, TV wall, briefing area, race officials’ office and a ‘fully integrated charging solution’ for electric vehicles. The electric GCK e-Blast 1 was the vehicle on hand to show that it worked.

The solar panel field collected 300kW to 600kW during the day to be redistributed at night. The ASO hopes to have spread these energy solutions across its entire event in just three years. 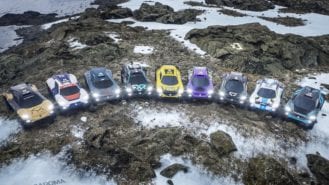 “It is no secret that the Dakar Rally is a huge passion of mine, and I’ve never stopped working on returning to it. Now, to be able to join ASO and the 2021 Dakar here in NEOM with GCK Motorsport and GCK Energy presenting a key stepping stone in the future of cross-country events of this scale is momentous for GCK and for me personally.

“Our vision is to encourage the move towards green technology across the globe and I’m very proud of what the GCK teams have created to present to you.”

Motorsport has been witness to a recent boom in off-road green technology and subsequent championships with Extreme-E, the Electric Supercharge Championship and also an electric support series for the World Rallycross Championship all recently being announced.