Mercedes lost its grip on both championships after a torrid Monaco Grand Prix but the Baku street circuit looks set to separate them and Red Bull by the finest of margins.

Plenty has been said about flexible wings in the build-up, and the controversy is set to rage on. As a result, the new championship leaders may be battling off track as well as on it this weekend.

Last month’s Monte Carlo race was the first since the 2012 US Grand Prix that Red Bull, Ferrari and McLaren have shared the podium together, with the Prancing Horse having the measure of the Woking squad on the street circuit.

Will one of F1’s fastest street circuits prompt another change in competitive order between the storied rivals or can Carlos Sainz and Charles Leclerc carry Monaco’s momentum with them into Baku?

Here are a few items to keep an eye on throughout the Azerbaijan Grand Prix weekend. 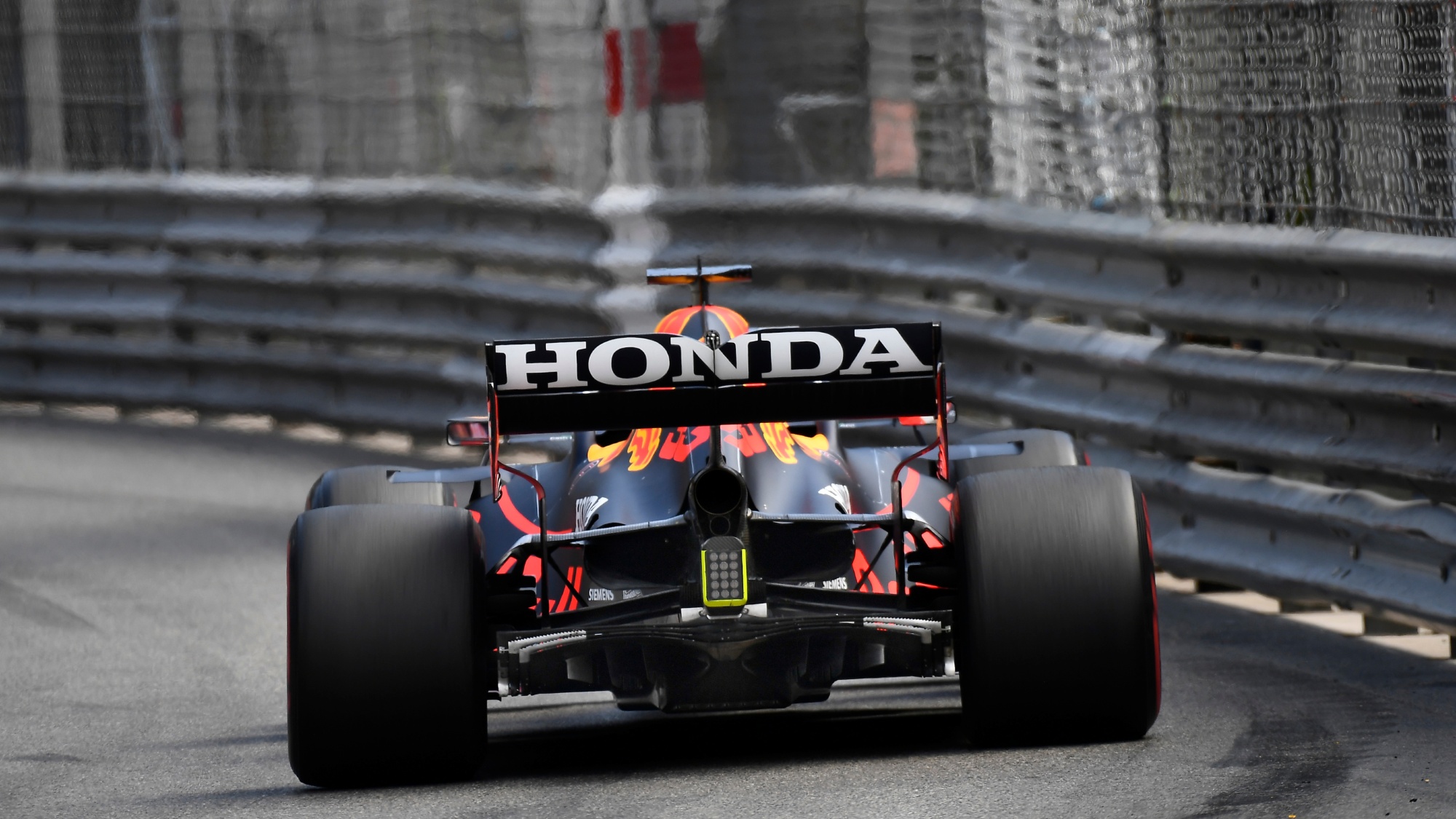 Whose wings are bendier? Toto Wolff and Merc have threatened protest against Red Bull’s rear wings while Dr Helmut Marko has been bullishly on brand and offered a counter-protest in return, but will either push the nuclear button?

The FIA has already confirmed that tougher new load tests will be introduced at the French Grand Prix to enforce the ban on moveable aerodynamic devices. This is likely to require some teams, including Red Bull, to re-engineer their rear wings.

Video footage clearly shows that the Red Bull’s wing flexes considerably at high speed — beyond the forces currently used to test movement. It presses down towards the ground to offer the advantage of lower drag in a straight line but greater downforce in the corners when the aero loads lessen.

Alfa Romeo has also been outspoken in its disappointment that the style of wing has been ruled illegal.

In the case of the defending world champions, the allegations have gone from back to front. While clips from the Spanish GP showed the Red Bull rear wing dipping down at speed, the Milton Keynes-based team claims that Mercedes’ front wing did the same, potentially contravening the rules in the same manner.

Mercedes made clear that it would look to protest Red Bull should the flexi-wing make an appearance in Azerbaijan, given that moving wings are banned but might Red Bull lob a grenade back over the fence to keep things interesting?

A title fight this close could be fought on track and behind closed doors. 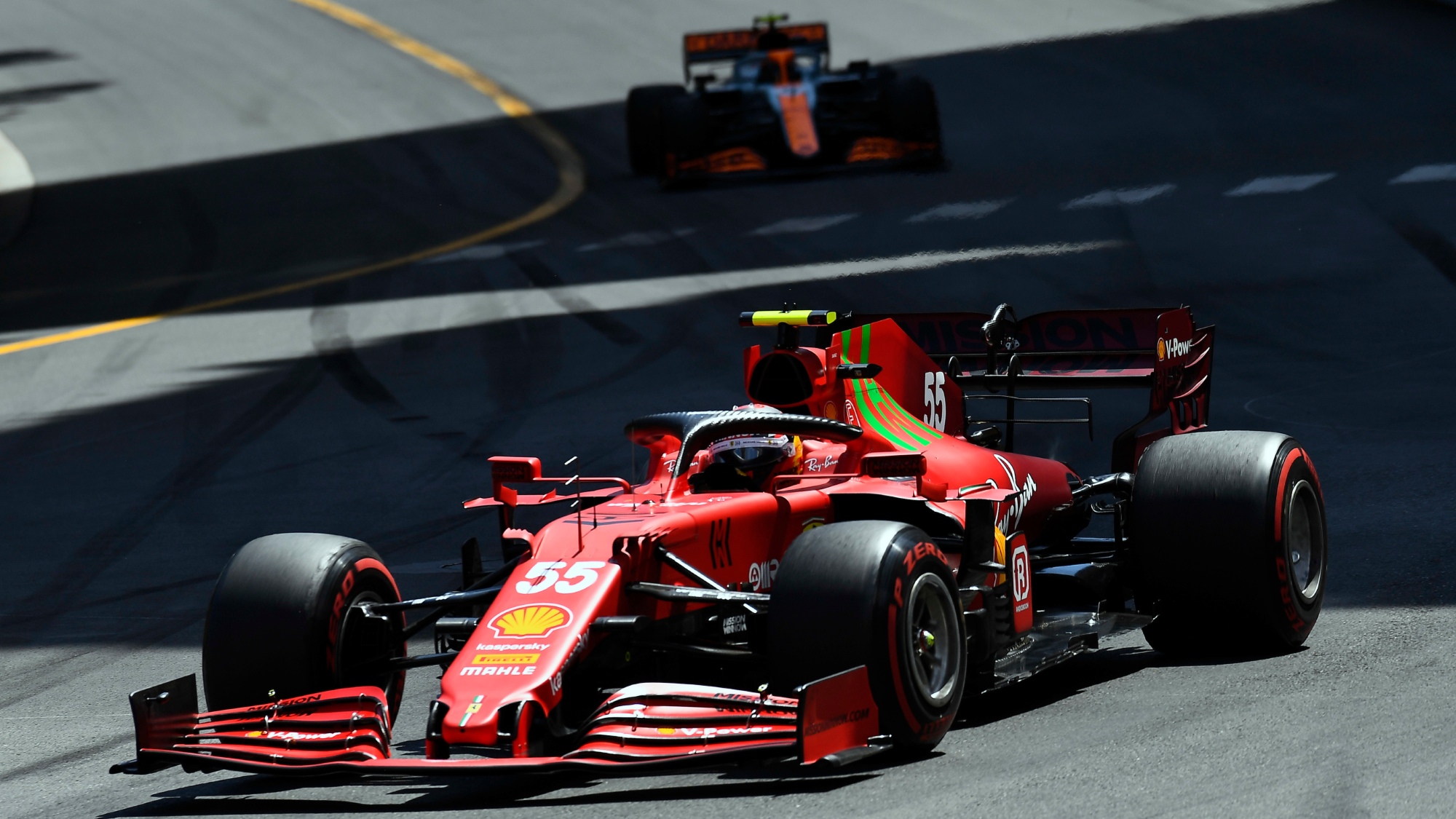 Ferrari shaded McLaren in Monaco. Will there be a repeat in Baku?

It may very well have been a double Ferrari podium had Charles Leclerc not crashed his car at the exit of the swimming pool chicane in the final qualifying runs on Saturday.

The Monégasque and team-mate Carlos Sainz combined to usurp McLaren as the best of the rest behind Mercedes and Red Bull and were actually challenging the latter for outright supremacy around the famous circuit.

So will there be a repeat this weekend as F1 heads directly to another street track or is McLaren set to hit back and recover from a weekend in which it lost vital points to its direct rival?

For the orange cars to take precedence, Daniel Ricciardo will need to start pulling his weight in the team. The Australian arrived with a big reputation and a salary to match but, thus far, it has been Lando Norris who has been the star performer. Two podiums in five races marks his best stint in F1 since arriving in 2019.

On the other side of the battle, new recruit Sainz has embedded himself seamlessly at Maranello and has regularly been setting comparative pace to Leclerc so far this season.

The Spaniard was unfortunate to be one of those who missed out on setting a final Q3 time, thanks to Leclerc’s moment on Saturday in Monaco, though it would have taken a mighty lap to take pole position. So is Ferrari back in semi-competitive form or is it all a mirage?

Baku will sort out the misrepresentative from the truly competitive.

What about the rookies? 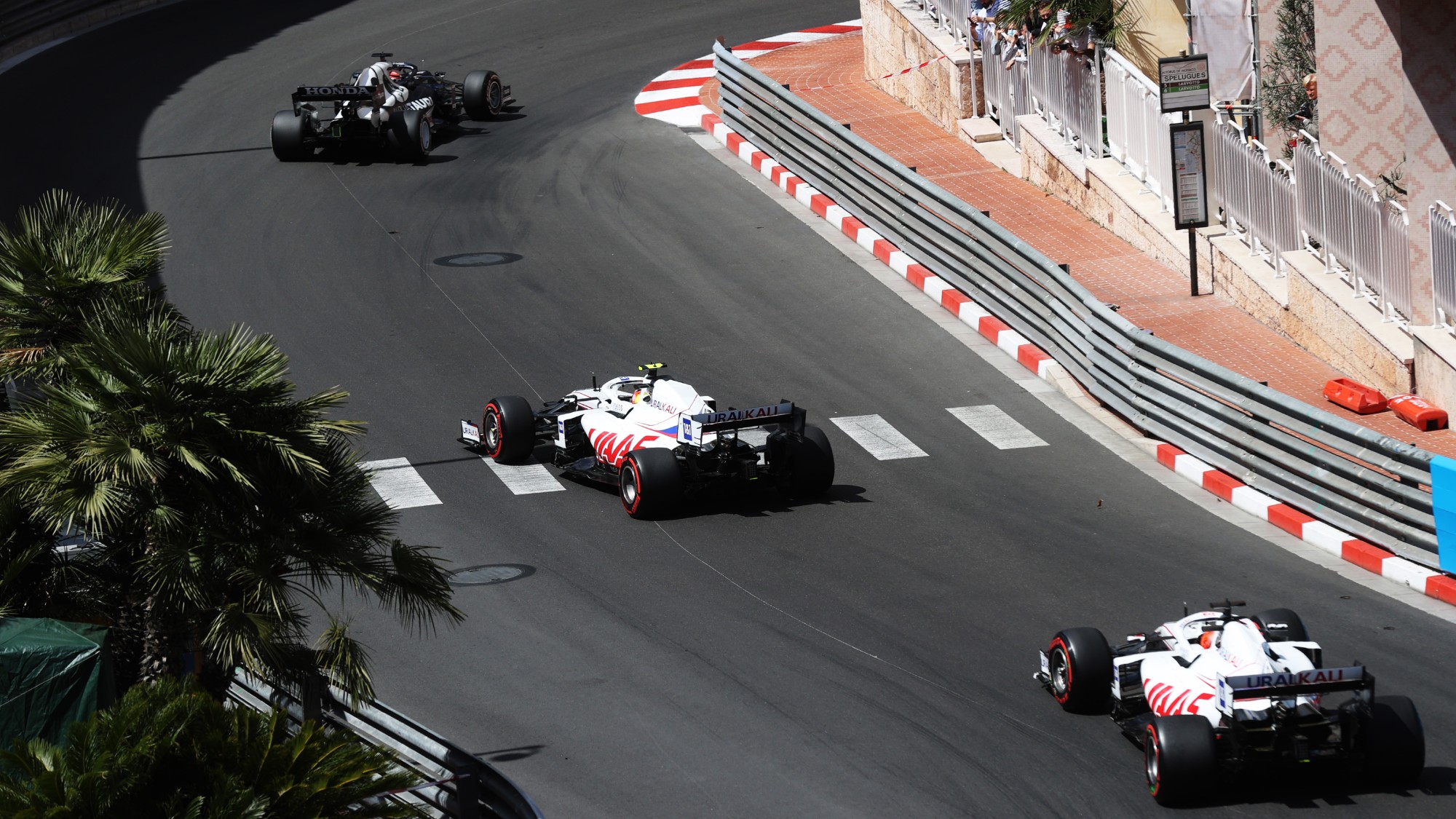 Each of the 2021 rookies struggled in Monaco

A wise man once said “You have to be alert on a street circuit” and Jolyon Palmer was spot on in his assertion pre-Baku all those years ago. Two of the three rookies hit the barriers last time out as experience or lack thereof showed. The sole survivor not to brush the walls was Nikita Mazepin but the Russian cut a flustered figure in the cockpit as his cries were played out over team radio.

When asked if he could change engine settings, his response was blunt and exasperated but such is the challenge of mastering the modern F1 car around a street circuit in a maiden season, his response isn’t surprising.

Mick Schumacher pulled one of the only overtakes of the Monaco GP on his team-mate right at the start of the race, proving that it is possible, but the divebomb at the Grand Hotel Hairpin was the high-point of his race. Fuel pressure issues meant he finished last of the classified runners while Yuki Tsunoda languished in an unimpressive 16th as Pierre Gasly scored P6 for AlphaTauri.

Will the Baku circuit be a bigger test of their mettle or does the wider track width leave the trio with a margin for error they weren’t afforded by the Monaco harbourside? 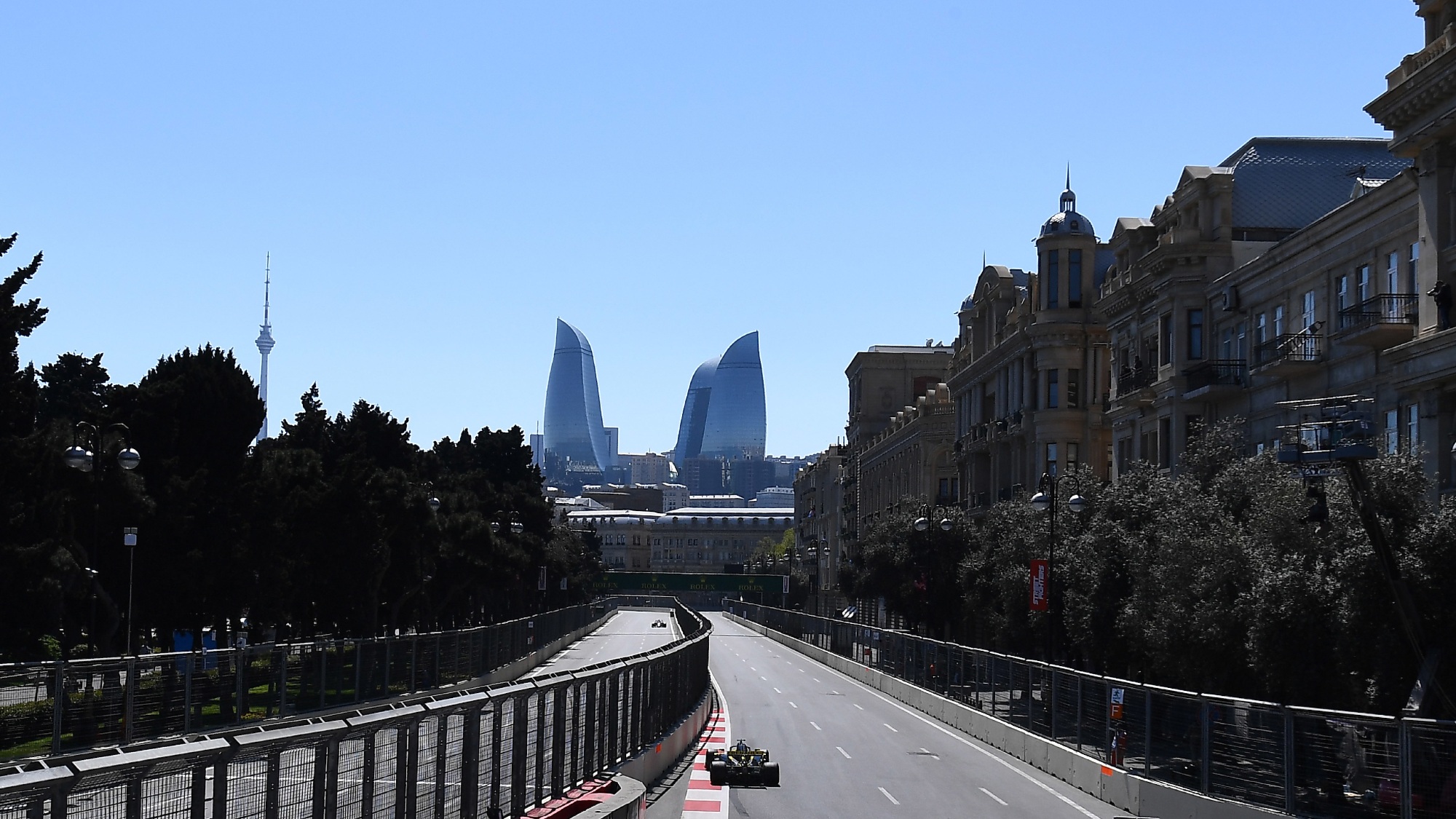 F1 is back in Baku this weekend. Will we see a thriller?

2021 will be the fourth year F1 has headed to Baku for an Azerbaijan Grand Prix, and the fifth year the city has hosted a race. While the 2016 debut under the European Grand Prix moniker was a snoozefest, there have been thrilling contests in the years since.

Sebastian Vettel’s moment of madness under the safety car in 2017 versus Lewis Hamilton is a highlight as well as the clash between Daniel Ricciardo and Max Verstappen back in 2018.

The numerous high points and controversies over the years have provided some of the best races each season but it has also put on some of the dullest races in recent memory too. 2016’s maiden event was won by eventual world champion Nico Rosberg but had little in the way of on-track action to speak of.

2019’s event was a poor race by the high standards of the two preceding years. Valtteri Bottas made up for the heartbreaking puncture that had denied him victory the year prior to win from team-mate Hamilton in a dull affair.

So we have an even split. Half of the Azerbaijan races have been brilliant chaotic events, the others dull and straightforward that have passed without much note.