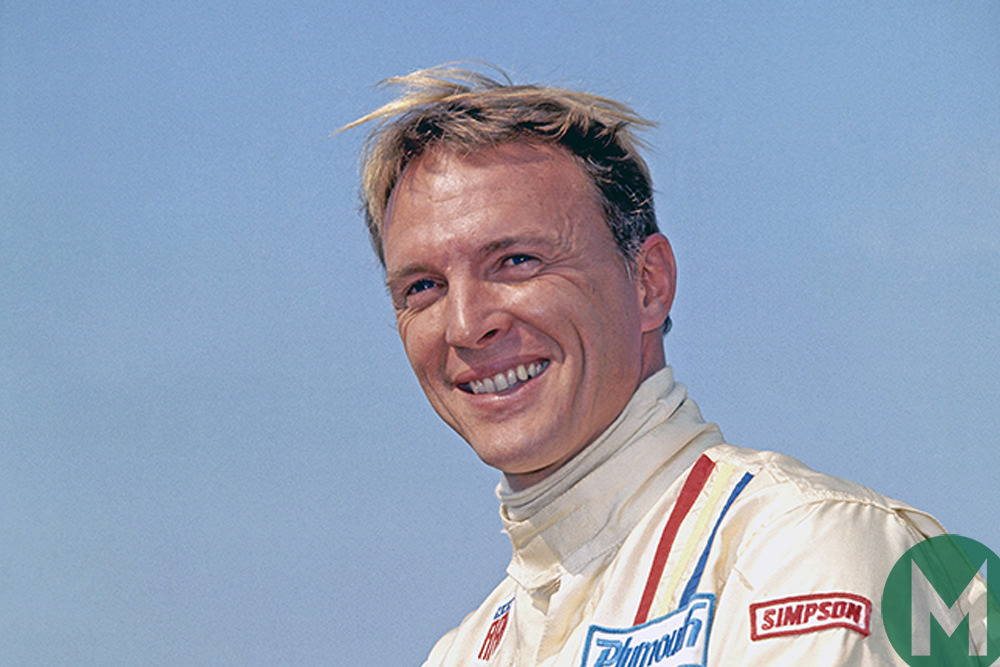 1877 Christian Lautenschlager, winner of the 1908 and 1914 Grand Prix de l’Automobile de France (French GP), was born in Magstadt. He joined Daimler in 1899 and was Otto Salzer’s riding mechanic for the 1906 Circuit des Ardennes. He replaced Camille Jenatzy in the Mercedes GP team in 1908 and won that year’s race on a 47-mile circuit near Dieppe. He then led a Mercedes 1-2-3 in 1914 after Georges Boillot’s Peugeot retired, the race held on the eve of World War I at Lyon. Lautenschlager had intended to use his prize money to retire from racing but he returned and competed in the 1922 Targa Florio and 1923 Indianapolis 500.

1930 Tazio Nuvolari beat Achille Varzi in the 1930 Mille Miglia as Alfa Romeos finished 1-2-3-4. Legend has it that Nuvolari closed on Varzi, who was ahead on the road but second on adjusted times, unnoticed as dawn broke as his headlights were switched off. Nuvolari illuminated the lights as he passed his rival and continued on to victory in Brescia. Luigi Arcangeli led the first stage before crashing and Rudolf Caracciola’s 7-litre Mercedes-Benz lost time and finished sixth.

1931 American legend Dan Gurney was born in New York State 87 years ago. Four Grand Prix victories for Porsche, Brabham and his own Eagle marque do not do justice to his outstanding talent. He also won the 1967 Le Mans 24 Hours for Ford – after which he famously sprayed champagne – and was a race winner in the USAC National Championship and NASCAR stock cars alike.

1969 Jo Siffert and Brian Redman led a Porsche 1-2-3 in the BOAC 500 at Brands Hatch. It was the eventual champion constructor’s first win of the season. The only car that challenged the Porsches was the Chris Amon/Pedro Rodríguez Ferrari 312P which led at the start and finished fourth.

1986 The Spanish Grand Prix returned to the Formula 1 calendar for the first time in five years at the new circuit outside Jerez de la Frontera and it proved to be a classic. The Lotus-Renault of pole winner Ayrton Senna retook the lead when Nigel Mansell’s Williams-Honda stopped for tyres with 10 laps to go, dropping the Englishman to third when 20sec behind the leader. He charged past Alain Prost’s McLaren-TAG and onto Senna’s tail before running out of laps – losing by just 0.014sec in a dash to the line.

1929 The Monaco Grand Prix was held for the first time with the green Bugatti T35B of Francophile Englishman “W.Williams” beating Georges Bouriano’s T35C by 17.8sec. Rudolf Caracciola’s large Mercedes-Benz SSK was unsuited to the tight confines of the principality but the young German led the race and finished third nonetheless.

1933 1964 Monte Carlo Rally winner and current President of the British Racing Drivers’ Club Paddy Hopkirk was born in Belfast. He was a five-time winner of the Circuit of Ireland and forever linked to the Mini Cooper S. 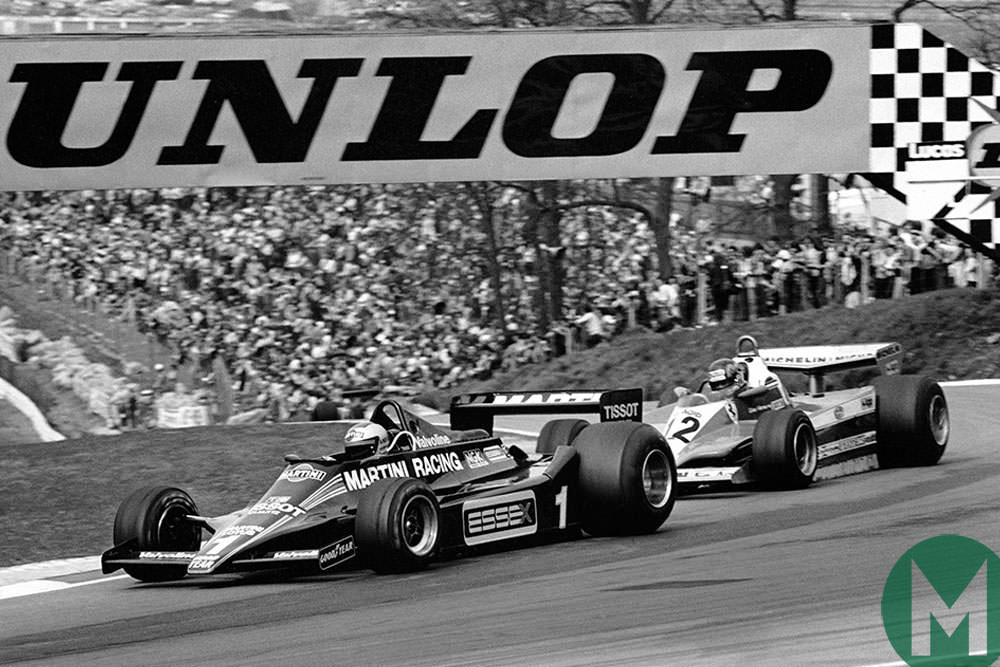 1979 Gilles Villeneuve (Ferrari 312T3) scored his third Formula 1 victory in a row when he claimed the non-championship Race of Champions at Brands Hatch. Niki Lauda’s Brabham-Alfa led at the start before his tyres degraded and Villeneuve passed the pole-winning Lotus 79-Ford of Mario Andretti to claim victory. The World Champion, who had endured a troubled practice with the new Lotus 80, finished third. Nelson Piquet charged back from an early tyre stop to finish in an impressive second position.

2001 Ralf Schumacher scored his breakthrough victory in the 2001 San Marino Grand Prix. That was Williams’ first success since 1997 to end a 54-race losing streak. The younger Schumacher used his BMW power to come from third on the grid to lead all the way. David Coulthard’s McLaren-Mercedes qualified on pole position and the Scot ran second throughout. Six points were enough to take a share of the championship lead with Michael Schumacher who had retired.

2012 Nico Rosberg finally scored his maiden Grand Prix victory after 111 unsuccessful attempts when he won the Chinese GP in Shanghai. It was Mercedes-Benz’s first victory as a constructor since Monza 1955.

1942 Sir Frank Williams was born in South Shields 76 years ago. It was after he re-launched his team in 1976 that the struggling midfielders became World Champions. With Sir Patrick Head responsible for design, Alan Jones and Keke Rosberg delivered the title at the start of the 1980s and their partnership with Honda delivered further back-to-back constructors’ championships and the 1987 title for Nelson Piquet. Williams-Renault was the class of the field by 1992 with Nigel Mansell successful that year and Alain Prost the next. Damon Hill and Jacques Villeneuve won in 1996 and 1997 in Williams’ most recent title successes.

1979 South African Rad Dougall scored a surprise victory in the televised Thruxton Formula 2 race on Easter Monday. He drove Toleman’s year-old March 782-Hart at the start of the season and finished second at Hockenheim before dominating in Hampshire. That was the highlight of Dougall’s career for he quit F2 and senior single-seaters in the middle of 1980. 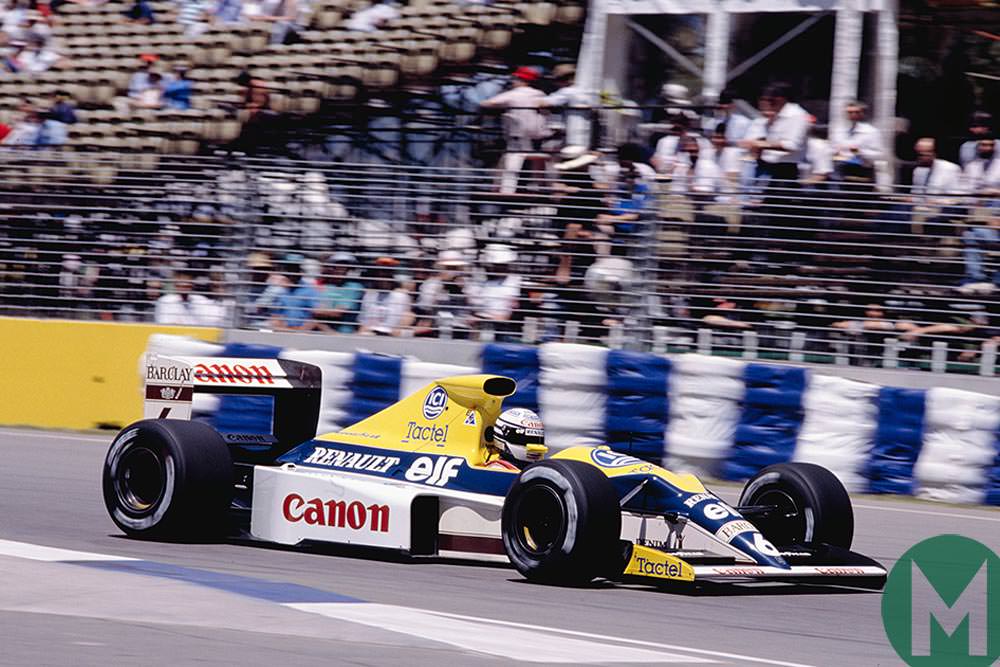 1954 Riccardo Patrese turns 64 years old today. A feisty newcomer when he impressed on his Formula 1 debut with Shadow, Patrese developed into a smooth and impressive Grand Prix winner. He finished as runner-up in the 1992 World Championship as Williams-Renault dominated, and won six of the 256 GPs that he started.

1988 Newcomer Johnny Herbert won the opening round of the 1988 Formula 3000 Championship at Jerez. The Englishman qualified for his F3000 debut on pole position and led throughout on what was Reynard’s first appearance in the series. Mark Blundell’s works Lola challenged before his tyres lost grip but he held on to complete a British 1-2.

1994 Michael Schumacher won the Pacific Grand Prix at TI Circuit Aida to strengthen his lead in the 1994 World Championship. The Williams-Renault of Ayrton Senna was eliminated on the first lap when nudged into a spin and hit by Nicola Larini’s Ferrari. Damon Hill was also spun but he climbed through the field to run second before retiring. Schumacher led throughout and lapped everyone except Gerhard Berger’s Ferrari. Rubens Barrichello finished third for Jordan-Hart to score the first podium finish of his career.

1942 Formula 1’s posthumous World Champion Jochen Rindt was born in Germany in 1942. Winner of the Le Mans 24 Hours when just 23-years-old, he took 49 races to win his first Grand Prix in 1969. He then dominated the 1970 season with a last-lap victory in Monaco (when driving a Lotus 49C) followed by four-in-a-row once he concentrated on the new type 72. On the verge of the title, the Austrian was fatally injured during practice for the Italian Grand Prix but his points total would not be beaten.

1960 The Glover Trophy was the highlight of Goodwood’s traditional Easter Monday meeting in 1960. Innes Ireland had impressed in the new rear-engine Lotus 18-Climax in Argentina and he was not to be denied in the opening non-championship race of the year. Having already won the Formula 2 Lavant Cup, the Scot passed Stirling Moss‘ Rob Walker-entered Cooper-Climax on lap four and withstood pressure to win by 2.8sec. It was the first F1 victory for Colin Chapman’s marque.

1971 Jackie Stewart won his second successive Spanish Grand Prix to register the first victory for Tyrrell as a constructor. Twelve-cylinder rivals had dominated qualifying in Barcelona’s Montjuich Park and the pole-winning Ferrari of Jacky Ickx led the opening five laps before Stewart passed at the end of the following lap. He then established a nine-second advantage before Ickx closed in once his fuel load lightened. The Belgian set a succession of fastest laps (including beating his pole position time) but could not wrestle the lead away from Stewart.

1982 The very first race to be held to Group C sports car rules was held at Monza although qualifying was dominated by the old Group 6 Lancias. Both 1.4-litre turbocharged cars retired so it was the interim Rondeau M382C-Ford of Henri Pescarolo, Jean Rondeau and Giorgio Francia that won the opening round of the World Endurance Championship by a lap. 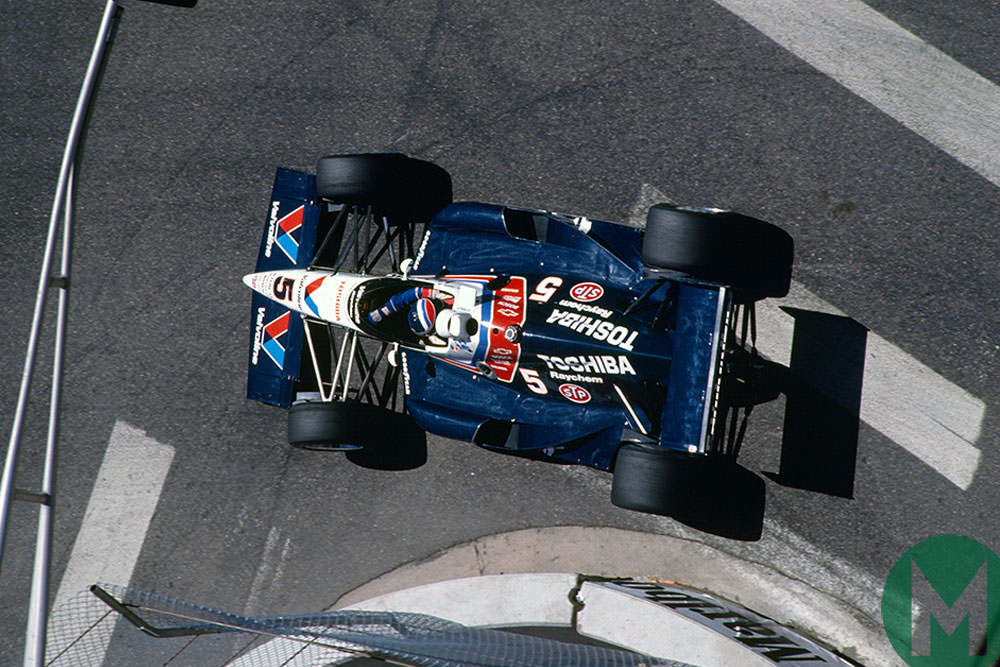 1962  Al Unser Jr was born in Albuquerque, New Mexico 56 years ago. He followed his father and uncle Bobby to become a multiple winner of the Indianapolis 500 and he was crowned CART champion in 1990 and 1994 for Galles-Kraco and Penske, respectively. That series was at its height during the late-1980s and early-1990s with second-generation drivers Unser and Michael Andretti among the star attractions. Unser retired from racing after driving for AJ Foyt in the 2007 Indy 500.

1965 Jim Clark was supreme at a bitterly cold Goodwood on Easter Monday in 1965. Approximately 50,000 hardy souls turned up despite hail and snow and saw the sport’s current star win the saloon car St Mary’s Trophy, Lavant Cup for sports cars and the headlining Sunday Mirror Glover Trophy. The latter event was the last contemporary F1 race to be held at the Sussex venue before it closed a year later. Clark qualified on the outside of the three-man front row and passed Graham Hill for the lead after five laps – beating the Englishman by 24.2sec.

1970 Jackie Stewart made a great start from third at Járama to lead all the way to victory in the Spanish Grand Prix. The reigning champion lapped the field in his Tyrrell Racing Organisation-entered March 701-Ford in what was the first win for the new marque in just its second race. Forty-four-year-old Jack Brabham, winner of the opening race in South Africa, qualified on pole position and challenged until his engine expired. Jackie Oliver crashed into Jacky Ickx when his brake on the opening lap, leaving the cars engulfed in flames. Bruce McLaren and Mario Andretti completed the top three with the American scoring his first podium finish.

2009 Sebastian Vettel led Mark Webber in a 1-2 in China to score Red Bull’s first Grand Prix victory. The German started from pole position although the race started behind the safety car due to the wet track surface. He dominated but nearly lost victory when hit by Sébastien Buemi’s Toro Rosso during a subsequent safety car period. The Brawn GPs of championship leader Jenson Button and Rubens Barrichello finished third and fourth.