This week in motor sport, from the database and archive 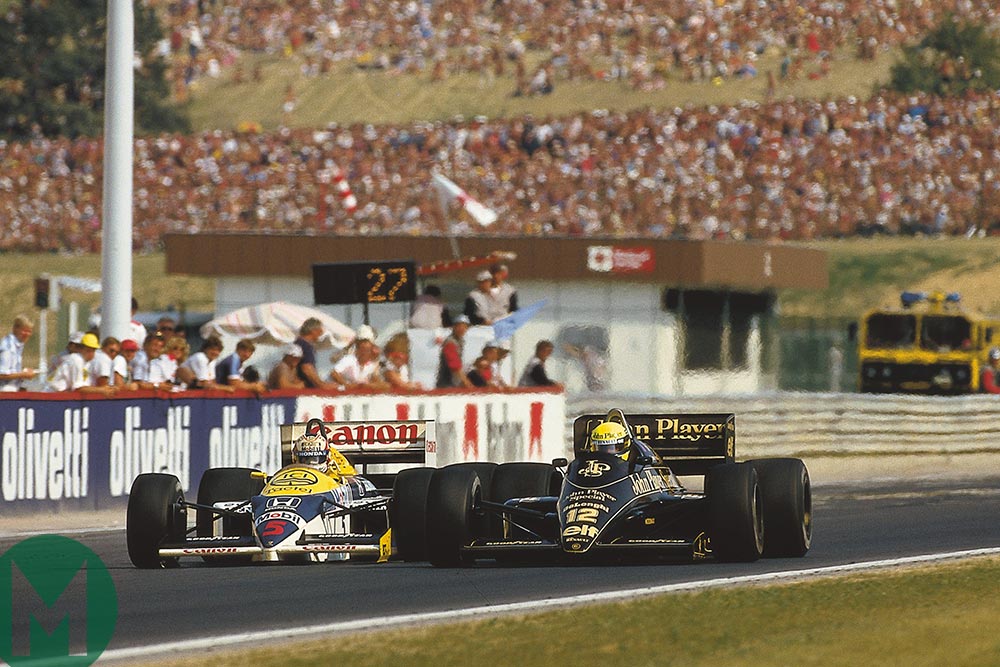 1969 Jo Siffert and Kurt Ahrens gave the Porsche 917 its first victory in the Austrian Grand Prix sports car race at the new Österreichring. Joakim Bonnier and Herbert Müller finished just 1min 07.16sec behind in a Lola T70 Mk3B after a closely fought second half to the 1000Kms race. Richard Attwood and Brian Redman were third, a lap behind, in another 917. Sharing John Wyer’s Gulf Mirage with Jackie Oliver, Jacky Ickx qualified on pole, led at the start and set the fastest race lap before retiring. Johnny Servoz-Gavin’s Matra-Simca crashed out of the lead.

1986 The Formula 1 World Championship expanded into Eastern Europe when the first Hungarian Grand Prix for 50 years was held in 1986. Brazilians Nelson Piquet and Ayrton Senna battled for victory on the new Hungaroring with the Williams-Honda eventually prevailing after two hours in the stifling heat. Nigel Mansell (above, with Senna) was lapped in third with the Englishman convinced Piquet had not shared a technical advantage within the team.

1953 One of the best racing drivers of all time, Tazio Nuvolari died in his hometown Mantua on this day 65 years ago. A Grand Prix winner throughout the 1930s, Nuvolari repeatedly upset the odds in inferior machinery – most notably to win the 1935 German GP. Winner of the 1933 Le Mans 24 Hours, he was twice successful in the Tourist Trophy, Mille Miglia and Targa Florio. He beat the American stars in the 1936 Vanderbilt Cup on Long Island and, fittingly, it was Nuvolari that won the final GP before World War II in Yugoslavia. Dr Ferdinand Porsche described him as “the greatest driver of the past, the present or the future”.

1985 Derek Bell (below) and Hans-Joachim Stuck won the 1985 Mosport 1000Kms after Porsche team-mates Jacky Ickx and Jochen Mass suffered a puncture and subsequent crash. Just five minutes were lost effecting repairs by the race was lost. Jaguar finished third on its return to the World Sportscar Championship but it was a tragic day. Manfred Winkelhock’s Kremer Porsche 962C crashed after 69 laps with the German succumbed to serious head injuries in hospital on the following day. 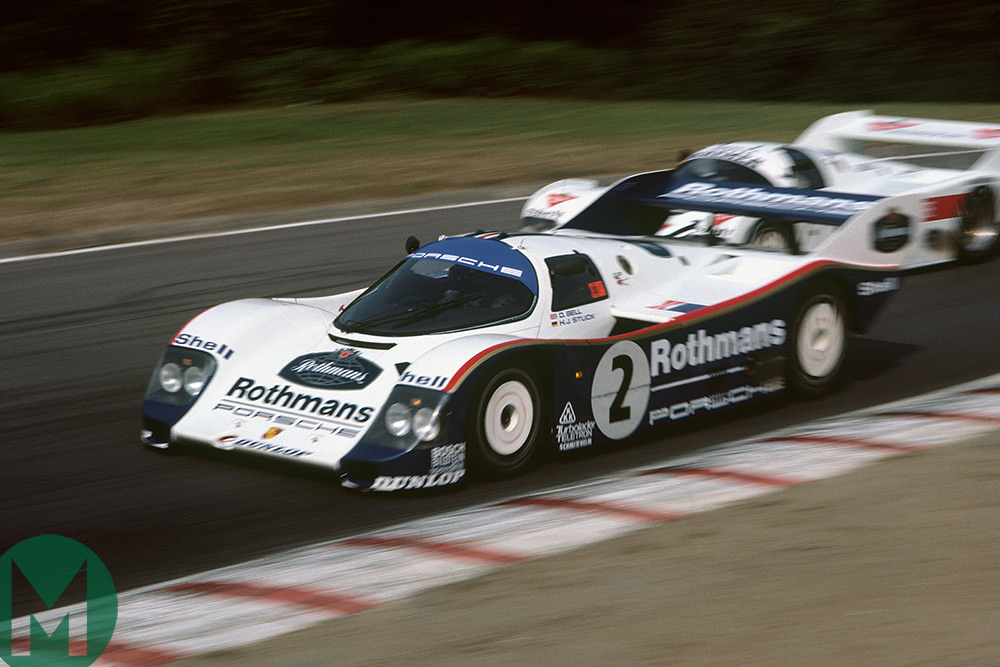 1933 Championship-winning team owner and racing driver Parnelli Jones was born on this day in 1933. He qualified on pole for the 1962 and 1963 Indianapolis 500s – beating Jim Clark to victory that latter year when not black-flagged for trailing oil in the closing stages. A champion in midgets, stock cars and Trans-Am, Jones was the leading Indycar team owner at the start of the 1970s. Al Unser won the 1970 national title and the Indy 500 that year and the next in Jones’ Colt while Joe Leonard won the title in 1971 and 1972. Jones entered Formula 1 from 1974 until 1976 with Mario Andretti fourth in the 1975 Swedish Grand Prix.

1990 Thierry Boutsen used the Hungaroring’s lack of passing opportunities to win a Grand Prix for the third and final time. He started from a maiden pole position and withstood intense pressure throughout, finally beating Ayrton Senna by just 0.288sec. Gerhard Berger and Alessandro Nannini had challenged the Williams-Renault but Berger crashed into Nigel Mansell and Nannini was punted out of the race by Senna.

1989 Nigel Mansell (Ferrari, below) came from 12th on the grid to win the 1989 Hungarian Grand Prix. McLaren-Honda’s year-long qualification domination was ended by Riccardo Patrese and the Italian’s Williams-Renault led for 52 laps before his radiator was damaged. Having shadowed the leader so far, Ayrton Senna then lost the lead was momentarily baulked while lapping Stefan Johansson’s Onyx. Mansell had charged through the field and took advantage to pass the Brazilian and score one of the finest victories of his career. 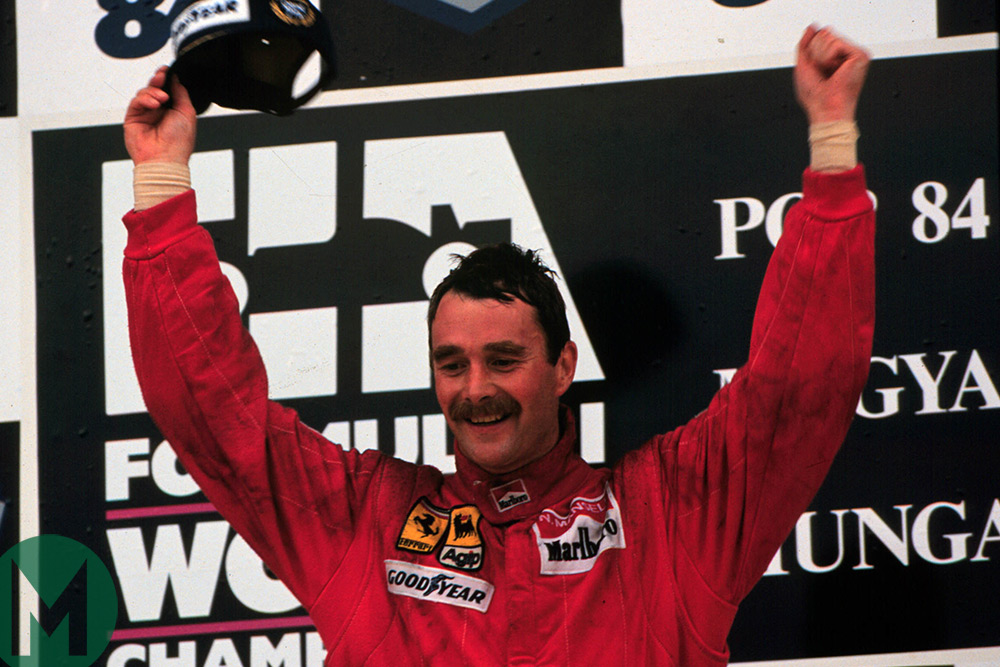 1942 Born on this day in 1942, Jackie Oliver enjoyed a successful racing career that encompassed the 1974 Can-Am title and six victories in world sports cars that included the 1969 Le Mans 24 Hours. Third was his best result in 50 Grand Prix starts for Lotus, BRM, McLaren and Shadow – achieving that finish in the 1968 Mexican and 1973 Canadian GPs. He was among the founders of the Arrows Formula 1 team in 1978 which he ran until selling to Tom Walkinshaw in 1996.

1960 Jack Brabham (below) won the 1960 Portuguese Grand Prix to successfully defend his world title. John Surtees qualified on pole for Lotus but it was Dan Gurney’s BRM that led for the opening ten laps until slowed by an oil leak. Surtees appeared on course for his maiden victory (on only his third start) but crashed when his foot slipped off the pedals, fuel having leaked into cockpit. Brabham recovered from an early spin to lead Bruce McLaren in a Cooper 1-2 that also confirmed the constructors’ title.

1988 Formula 1’s most famous team owner Enzo Ferrari died 30 years ago today. A former driver who counted the 1924 Coppa Acerbo among his victories, he formed Scuderia Ferrari in 1929. Having run Alfa Romeo’s racing activities before World War II, Ferrari became a constructor in its own right in 1946. It joined the new World Championship at the second round in 1950 and won the constructors’ title on eight times before his death at the age of 90. Ferrari won Le Mans outright nine times and was World Sportscar Champion in 12 of the first 15 years of the series. 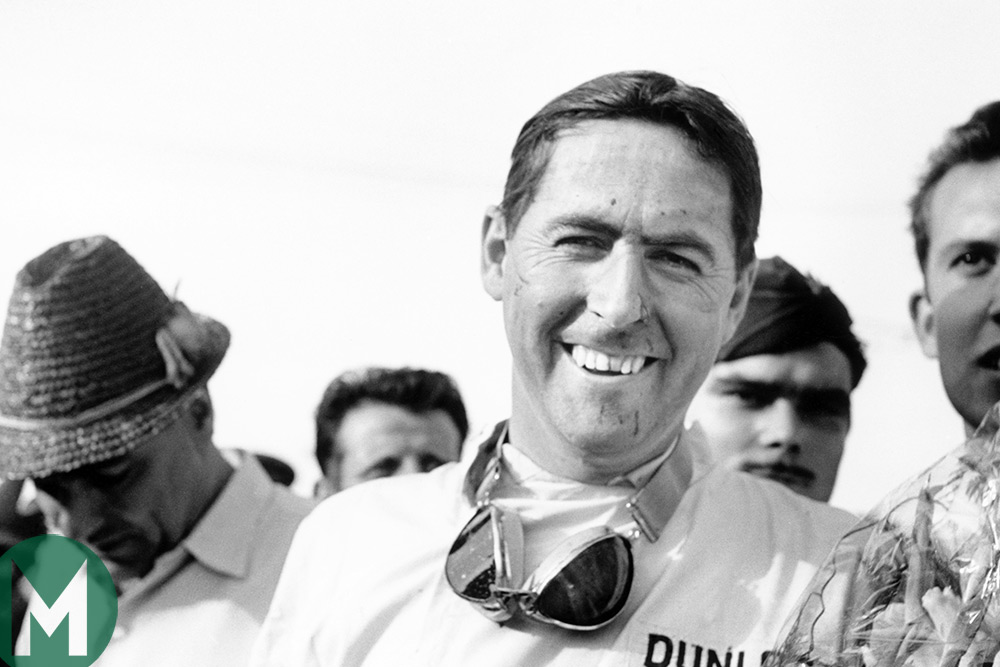 1961 The 16-mile Pescara road circuit held its last major race on this day in 1961 – the Pescara 4 Hours – the final race of that year’s World Sportscar Championship. The Scuderia Centro Sud Ferrari 250TR of Lorenzo Bandini and Giorgio Scarlatti inherited victory after Richie Ginther/Giancarlo Baghetti’s works 246SP retired. Lucky Casner’s “birdcage” Maserati took over in the lead but the American soon crashed while avoiding a backmarker. He was badly scalded by boiling water as the car rolled. Bandini had been delayed on the opening lap but came from 35th to lead the rest of the race.

1976 With Ferrari absent following Niki Lauda’s accident at the Nürburgring, a shower made the early laps of the Austrian Grand Prix treacherous for the slick-shod field. John Watson qualified on the front row and raced Ronnie Peterson and then Jody Scheckter for the lead in the early laps. The South African’s suspension broke and Watson’s Penske eased to a first GP victory, a year after the team’s Mark Donohue’s fatal accident at the same track. James Hunt qualified in pole position but could only finish fourth.

1982 Elio de Angelis edged out Keke Rosberg by 0.050 seconds in a thrilling finish to the 1982 Austrian Grand Prix (below). Turbocharged engines dominated but either retired or were delayed – Alain Prost’s Renault losing a clear victory a couple of laps from the finish. A Brabham-BMW finally made it to half distance for the much-anticipated refueling pitstop. Riccardo Patrese was stationary for just 14 seconds and retained the lead only for his engine to fail, sending the leading car into a high-speed spin. Prost’s demise left de Angelis’s atmospheric Lotus-Ford to just withstand Rosberg’s late charge to score his maiden victory. 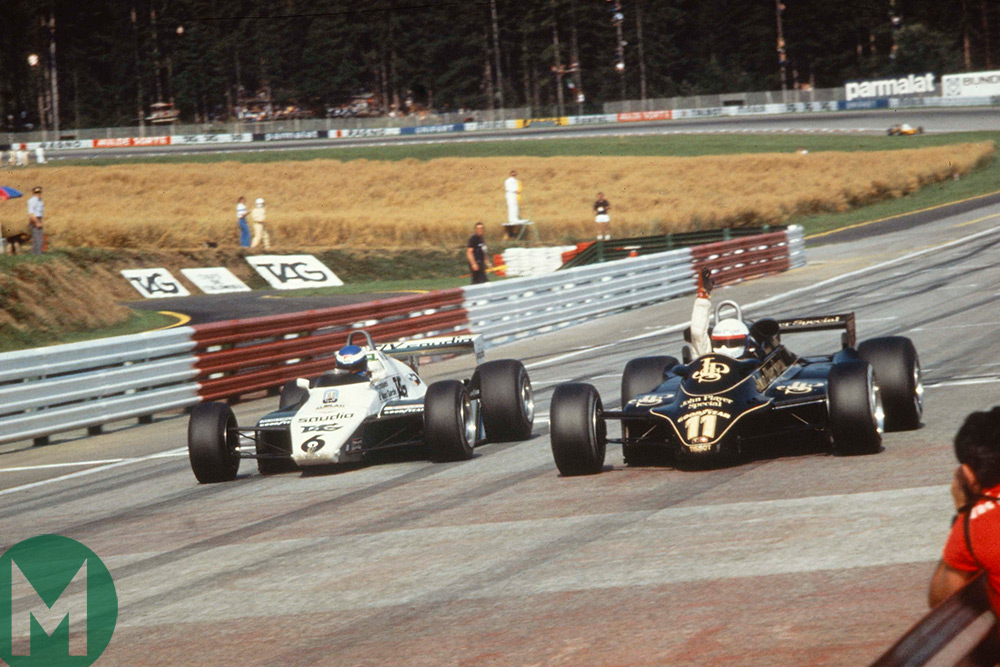 1952 Peter Collins and Pat Griffith won the inaugural Goodwood 9 Hours for Aston Martin on this day in 1952. The race began at 3pm and finished at midnight in what was the first night race held in England. The track was wet at the start but Stirling Moss (Jaguar C-type) established himself at the head of the field as it dried. Leading with two hours to go, co-driver Peter Walker pitted with broken rear suspension and the resulting long stop restricted them to fifth at the finish. Bobbie Baird and Roy Salvadori also led in a 2.7-litre Ferrari but lost four laps changing a battery. The Aston Martin of Reg Parnell and Eric Thompson was burnt out in a pitstop and the sister DB3’s victory was greeted by fireworks as it crossed the line.

1992 After years of narrowly missing out on the title, Nigel Mansell recovered from a puncture to finish second in Hungary to clinch the 1992 World Championship. Williams team-mate Riccardo Patrese started from pole position and led for 38 laps before spinning out. Ayrton Senna qualified third behind the Williams-Renaults and won for the 35th time. Damon Hill finished 11th for Brabham in what was the last race for the once great marque.