1969 Jackie Stewart (above) won a slipstreaming classic at Monza in 1969 to clinch his first World Championship and confirm the constructors’ crown for Matra-Ford. Just 0.19 seconds covered the top four finishers with Jochen Rindt (Lotus 49B-Ford), Jean-Pierre Beltoise (in the other Matra MS80-Ford) and Bruce McLaren’s M7C-Ford following the new champion across the line in a typical blanket finish at Monza.

2008 Ten years ago, Lewis Hamilton and Kimi Räikkönen fought a titanic battle for victory of the Belgian Grand Prix only for the result to controversially be overturned in the stewards’ room. Having spun early, Hamilton closed in on race leader Räikkönen as rain began to fall. The crucial moment came with three laps to go when the Hamilton attempted to pass his rival into the chicane only to run wide. Hamilton briefly gave the place back before retaking the lead into La Source as the rival cars touched. With the rain now heavy, Hamilton took to the grass to avoid a lapped car and Räikkönen spun and then crashed. So Hamilton led Felipe Massa to the finish only to be handed a 25-second penalty for cutting the chicane which demoted him to third in the final result. 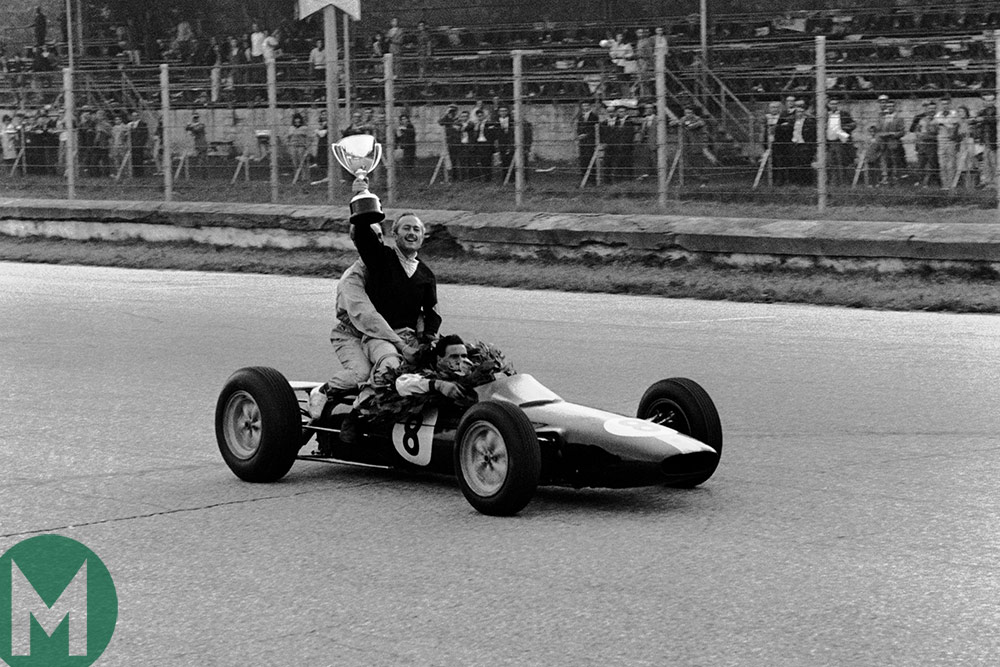 1963 It is 55 years since Jim Clark clinched the World Championship for the first time by winning the Italian Grand Prix at Monza. Graham Hill, John Surtees and Dan Gurney also led but were forced to retire – leaving the new world champion to beat Richie Ginther’s BRM by 1min 35sec. Clark celebrated by giving a lift to Colin Chapman (above) on his Lotus 25-Climax with the Lotus team owner brandishing the winner’s trophy above his head.

2006 Australian touring car legend Peter Brock was killed on this day 12 years ago when he crashed an AC Cobra Daytona Coupé while competing on the historic Targa West Rally near Perth. Brock won Bathurst’s touring car classic on nine occasions and was crowned Australian Touring Car Champion in 1974, 1978 and 1980 for Holden. He raced at Le Mans on two occasions but it was in his homeland that Brock’s legacy was forged. 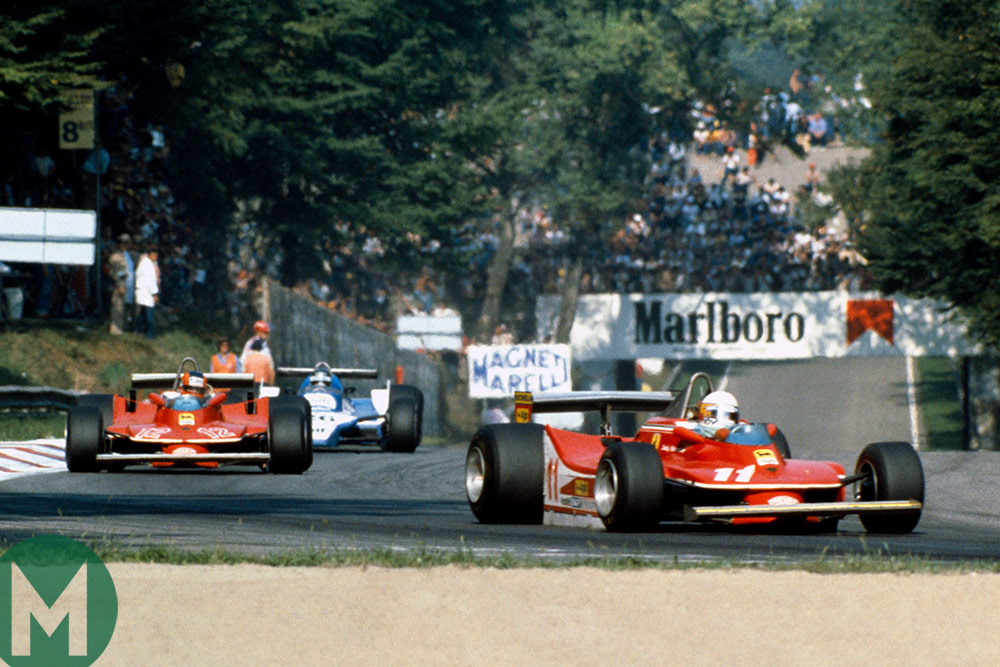 1945 The battlefields of Europe had barely fallen silent before a unique race meeting was held in the Bois de Boulogne, Paris on this day in 1945. In a strong display of unity and regeneration, greats from pre-war motor racing gathered with participation more important than success. For the record, Jean-Pierre Wimille won the Coupe des Prisonniers, Henri Louveau the Coupe de la Libération and Amedée Gordini the Coupe Robert Benoist – that race named after the Grand Prix star and Résistance hero who had been executed by the Gestapo a year previously.

1979 Jody Scheckter led Gilles Villeneuve in a formation Ferrari 1-2 finish (above) in Monza as he clinched the 1979 World Championship in front of an ecstatic Tifosi. Renault locked out the front row and René Arnoux took the lead on lap two but retired with an engine misfire once more to leave Scheckter to lead the rest of the way to the finish. Nelson Piquet crashed after an early incident with Clay Regazzoni but the Swiss crowd favourite continued to finish third for Williams.

1990 The 1990 Italian Grand Prix was stopped by Derek Warwick’s huge accident exiting the Parabolica at the end of lap one. His Lotus-Lamborghini overturned and slid along the track to a halt but Warwick climbed out and took the restart in the spare car only for the clutch to fail. Pole winner Ayrton Senna’s McLaren-Honda led all the way to victory with title rival Alain Prost (Ferrari) second and Gerhard Berger (McLaren-Honda) completing the podium places. 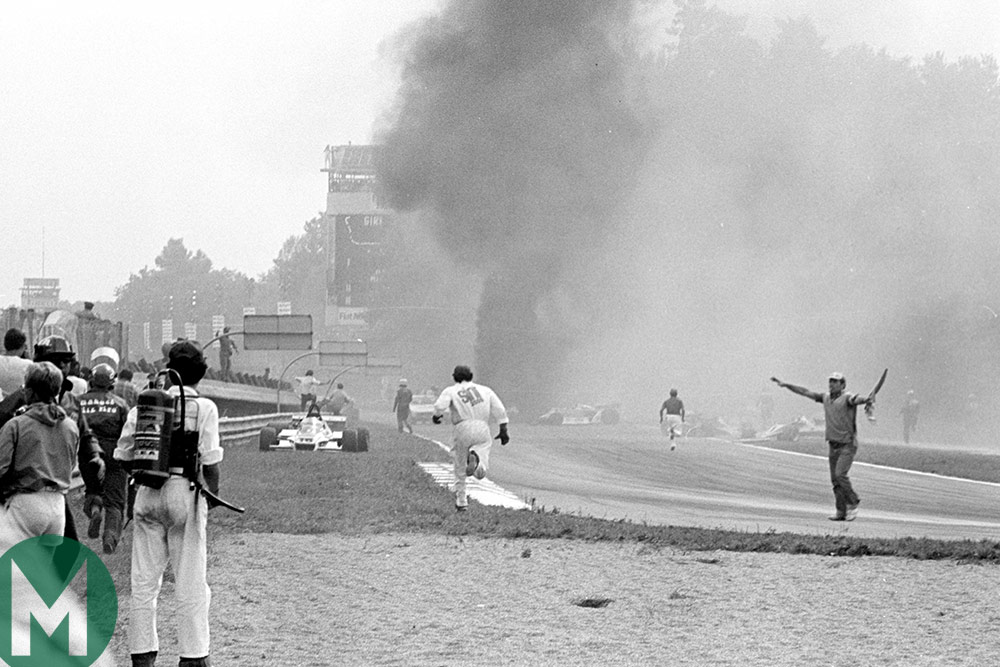 1961 Phil Hill became America’s first world champion by winning the Italian Grand Prix on a tragic day for the sport. Ferrari team-mate Wolfgang von Trips crashed on the second lap of the race with the German and 14 spectators killed – the worst loss of life during an F1 Grand Prix. The race continued nonetheless with Hill easing to victory after the engine in Richie Ginther’s sister car failed.

1978 It is 40 years since Ronnie Peterson and Vittorio Brambilla were injured in the startline accident that stopped the Italian Grand Prix (above). While Brambilla did eventually recover, the popular Swede died in hospital on the following day. Peterson’s team-mate Mario Andretti beat Ferrari’s Gilles Villeneuve on the road but both were penalised for jumping the restarted race, so Niki Lauda (Brabham-Alfa Romeo) inherited victory. Andretti had done enough to be confirmed as world champion but there was no joy in that achievement. 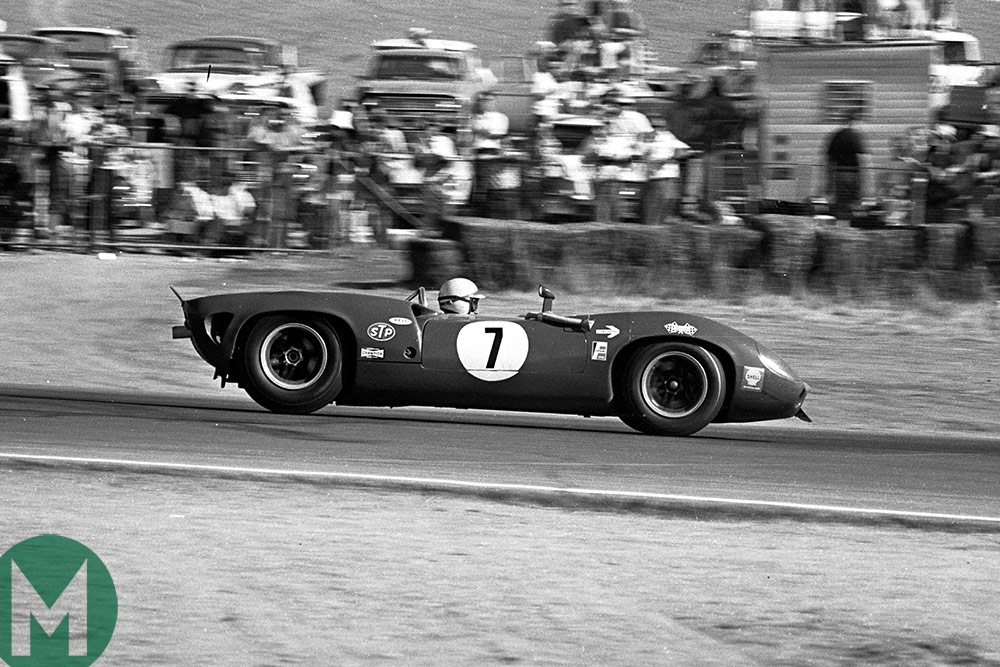 1966 A new sports-racing championship began on this day in 1966 – the Can-Am Challenge. John Surtees (above, at Riverside) won the opening race of the series, the Player’s Québec at St-Jovite, with a Team Surtees Lola T70-Chevrolet, in what was the first of three victories on the way to that inaugural title.

1988 It is 30 years since race leader Ayrton Senna crashed into the Williams of debutant Jean-Louis Schlesser during the closing stages at Monza. The Brazilian’s car was too badly damaged to continue so, with Alain Prost already out, McLaren-Honda failed to win for the only time that year. In the first Italian Grand Prix since the death of Enzo Ferrari, Gerhard Berger and Michele Alboreto inherited a 1-2 finish for the Scuderia with Eddie Cheever and Derek Warwick third and fourth for Arrows-Megatron. 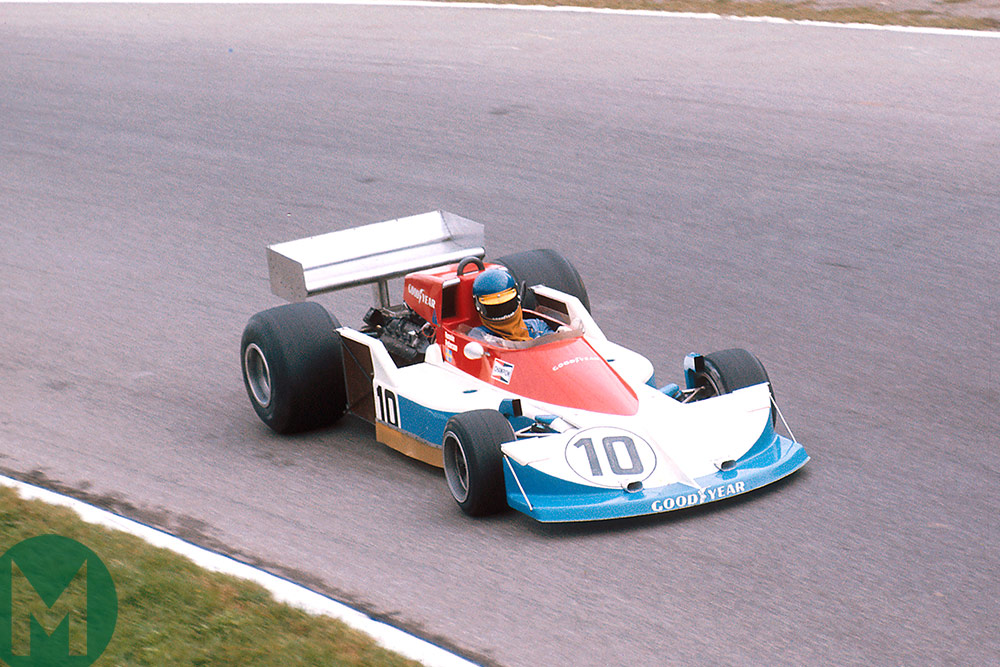 1976 Ronnie Peterson’s March (above) beat Clay Regazzoni (Ferrari) to win the 1976 Italian Grand Prix but it was the fourth-placed finisher that drew the greatest cheers from the crowd. Just weeks after being severely injured at the Nürburgring, Niki Lauda outqualified Ferrari team-mates Carlos Reutemann and Regazzoni on his comeback and scored three precious points by finishing fourth. Qualifying was marred by a fuel row which forced John Watson and both McLarens to start from the back. Ferrari’s day was complete when title challenger James Hunt spun out of the race after 11 laps.

1958 Goodwood first held the RAC Tourist Trophy 60 years ago today. The final round of that year’s World Sportscar Championship, Stirling Moss (above) and Tony Brooks led a 1-2-3 for Aston Martin and the DBR1 as the Feltham marque claimed a share of second in the standings, Ferrari having previously clinched the title. Already a three-time winner of the race, that was the first of four successive TT victories for Moss at Goodwood.

1981 The new Toleman team finally started a Grand Prix after Brian Henton qualified the ungainly Hart-powered TG181 for the Italian Grand Prix at Monza. The Englishman soldiered on to finish tenth despite a faulty rev counter and a misfire on a day dominated by Alain Prost’s Renault. It had been a faltering start for Toleman with nine successive DNQs before Henton qualified 23rd at Monza. What would become ‘Team Enstone’ was soon sold to Benetton and has since been known as Renault, Lotus and, now, Renault again.

2014 The first ever all-electric race was held on the roads around Beijing’s Olympic stadium on this day in 2014. The new FIA Formula E Championship opened with victory for Audi Sport Abt’s Lucas di Grassi after leaders Nicolas Prost and Nick Heidfeld were eliminated in a spectacular last-corner accident.