The first back-to-back races of the season will give us a better idea of the true competitive F1 order in 2021.

While Mercedes and Red Bull are locked in a battle for the titles at the front of the field, McLaren and Ferrari are fighting it out for the best of the rest award with Alpine and Aston Martin desperate to make up for poor starts to the season.

Early stand-out performers include Lewis Hamilton, Max Verstappen and Lando Norris though there is plenty to keep an eye on behind the top three in the driver’s championship.

Are there bargains to be had lower down the grid this weekend with the likes of Williams and Haas or should you stick with the safe options at the front?

Here are a few tips to keep in mind ahead of this weekend’s Spanish GP for your F1 Fantasy teams.

The biggest change in price from Portugal goes to Esteban Ocon after his second consecutive points finish of the year and Alpine’s improved performance. The team looked a little lost during and immediately after pre-season testing but there are signs of speed now, and it’s the lesser experienced Ocon that’s extracting the pace right now. His 0.4m rise in price takes him over the 10.0 mark.

Lando Norris, George Russell, Carlos Sainz and Charles Leclerc are the other drivers to get a price rise this gameweek, all jumping up 0.1m in value.

Alpine’s recent results have caused a jump in 0.2m while McLaren is the other constructor on the rise, just the 0.1m this week.

He caught everyone’s attention in pre-season but his form since then has slipped and unfortunately for him, Yuki Tsunoda is the biggest faller this week, dropping by 0.3m in value.

Daniel Ricciardo’s tricky start to life at McLaren and his embarrassing Q1 exit in Portugal has dented his value by 0.2m this week, and despite winning two of the three races so far this year, Lewis Hamilton has dropped by 0.1m in price.

Kimi Räikkönen, Sebastian Vettel and Nicholas Latifi are the other drivers to fall by 0.1m, while AlphaTauri and Ferrari have both dipped by 0.2m on the teams front. 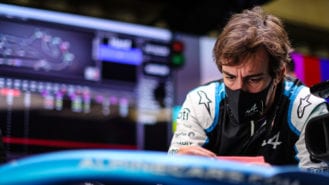 The 2021 title battle looks like a straight fight between Lewis Hamilton and Max Verstappen. Having one of the two protagonists and one of this year’s only race winners should be a priority if you’re looking for pole or race win points.

Hamilton at 33.3m is a hefty investment while Verstappen’s 25.3m gives you a little bit more wriggle room, but the Mercedes driver is aiming for five consecutive Spanish GP victories this weekend.

Lando Norris is the star performer in the best of the rest squabble behind the top teams and he still retains third in the drivers’ championship after three races despite his McLaren not looking like a race-winning car on pure pace.

Fernando Alonso’s Portugal pace might have been the first signs of his old self rising to the surface on his return. While the Spaniard had struggled to get to grips with the Alpine A521 during pre-season testing and the first two rounds of the season, he showed that he can put together a good race and scored his first on-track points finish of the season.

While Ocon appears to have the measure of his team-mate, the 15.0m price tag for the two-time champion might be off-putting until he can get a true rhythm going, but his Portimao promise is something to keep an eye on.

Sergio Perez showed a bit more of what we’d expected pre-season, using his experience to make a long race stint on the medium tyres work for fourth position at the Portuguese GP.

The Mexican has adopted the Verstappen set-up in the hopes of getting on terms with his highly-rated team-mate quicker but has found it hard work so far this season. His first representative finish of the year could be a catapult for the second Red Bull driver to disrupt the Mercedes duo at the front.

Nikita Mazepin should be on the no-fly list for your F1 Fantasy team immediately. If he wasn’t already, his spin on his first flying lap around the Circuit de Catalunya Barcelona should set you off right away.

Likewise, Nicholas Latifi is outclassed by team-mate George Russell on a Saturday and is unlikely to make up those lost points on Sunday with positional gain versus his starting grid position.

Sebastian Vettel’s Q3 heights in Portugal appear to be a false dawn for Aston Martin as the team struggles to get on top of the regulation changes arising from the floor changes and apparent benefit to the high-rake concept cars.

The team showed positive pace in FP1 but was off the boil in the second race-relevant FP2 session. Be warned.

Valtteri Bottas had his chance in a dry session to show that he had the pace to contend for a title in Portugal but was well down on Verstappen and Hamilton, dropping to P3 after a mistake on his outlap allowed the Red Bull driver to pounce for second position. Beyond a strong qualifying position, he’s looking unlikely to contend for a race victory with his rivals in such top form.