There are plenty of unknowns between now and the end of the 2021 Formula 1 season and this weekend will be one of them.

Last year’s hastily-arranged Turkish Grand Prix was a chaotic and memorable race but did little in the way of providing a clear picture as to who would’ve set the pace if conditions had been normal.

Red Bull arguably heads into this weekend the favourites with the high-rake philosophy and ability to fire up tyres in cooler temperatures key assets as the season continues into the autumn and winter months.

Mercedes is also fitting Lewis Hamilton’s car with a fresh engine this weekend which will see him drop ten places on the grid after qualifying. But this could play to your advantage if he qualifies highly and then climbs to a strong finishing position.

Who knows, an early charge from the Mercedes driver could see the battle resume between the title contenders on track again. But what else should you know ahead of the F1 Fantasy deadline?

There are five price risers this weekend and two are already costly assets. Lewis Hamilton took his 100th win in Russia and despite a possible grid penalty looming over him, he has gone up by 0.1m in value (33.1m) since Sochi. Mercedes has also jumped up by 0.1m to 37.3m

He’s joined by Carlos Sainz and Pierre Gasly though the former will be starting from the back of the grid for taking his fourth Ferrari power unit and the most up-to-date spec that promises a rise in performance. The duo are now priced at 14.5m and 12m respectively. McLaren is the other constructor to rise in value by 0.1m to 18.8m.

Sebastian Vettel is the only driver to fall in price between races. The Aston Martin driver has dipped by 0.1m since Sochi after finishing behind team-mate Lance Stroll and out of the points a lap down. He’s now valued at 15.2m.

On the teams front, Red Bull and Aston Martin have both fallen by 0.1m in value to 26.3m and 16.4m respectively.

At Imola, Portimao and Zandvoort, three of the newest circuits to be added to the calendar during the Covid-impacted seasons, Charles Leclerc has posted an average finish of fifth position, better than his closest rivals in team-mate Sainz as well as McLaren duo Norris and Daniel Ricciardo. At 17.6m, he’s the fifth most expensive driver asset but this will be the first weekend we get to see the new spec Ferrari power unit in action without a grid penalty holding him back. 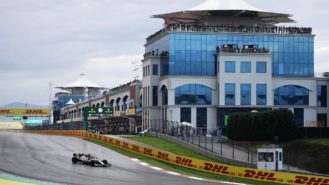 Hamilton braced for grid penalty? What to watch for at the Turkish Grand Prix

In the past 10 rounds, Fernando Alonso has failed to score points on just one occasion. The Alpine man is usually guaranteed to make up places from the start with a party piece launch and he has plenty of experience around the Istanbul Park circuit. He could very well be worth the 15.1m outlay as a midfield asset.

Lewis Hamilton is an intriguing prospect. He’ll earn qualifying points based on how he performs during the session, so pole would bring a ten point bonus. In that situation, he would then start 11th. If he then climbed to second — as Verstappen did from the back of the Russian grid — he’d get the maximum possible 10 points for gaining places, plus 18 points for his finishing position. His total would be more than he’d get for starting on pole and winning.

Constructors’ options are tricky and with McLaren and Ferrari now valued equally at 18.8m each, the choice will very much depend on how each is looking following FP2. Keep an eye on the long runs in the afternoon though last season Ferrari looked the better package in Turkey. Will they hold the same advantage this season?

Despite rising in price since the last race, Sainz will start the Turkish Grand Prix from the back of the pack for a new power unit spec set to be introduced this weekend. Team-mate Charles Leclerc has already taken that pain and has the new unit in the car but the chaotic Russian weekend disguised how much performance the new spec engine has provided.

The team usually peaks during practice but falls back in the race so picking Aston Martin as your constructor option is usually a bad move. The team has failed to score points in two of the last three races. If either driver pops up near the top of the times in FP2 or FP3, it’s usually a mirage.

Since winning the Azerbaijan Grand Prix, Sergio Perez has finished in the top five on just three occasions. The Mexican driver has struggled to keep pace with his team-mate and a best result of fifth in the last five races is an underwhelming return for a driver with one of the fastest cars on the grid.

As the season draws to a close, points and differential picks will begin to count for more and more in your mini leagues against close rivals.

Right now, Lando Norris (14.2m) is the most popular asset in F1 Fantasy, selected by a whopping 66% of players currently. Next best is Max Verstappen (25.6m) with 58% taking the Dutch driver and Pierre Gasly (12m) rounds out the top three with 46% opting for the AlphaTauri driver.

On the teams front, things are a little more diverse though there are two teams far out ahead of the rest. Red Bull (26.3m) is the most popular constructors pick at 33% with McLaren (18.8m) just behind in second with 29% of players opting for the team in orange. Ferrari (18.8m) is the third-most popular pick, but only 11% have opted to go with the Prancing Horse this weekend.

At the other end of the scale, Nicholas Latifi is the least selected driver in the game right now with less than 5% of players picking the Canadian. Nikita Mazpein follows and just about scrapes 5% approval while Latifi is joined by his compatriot Lance Stroll in the top three of unpopular picks. The Aston Martin driver is in just 7% of teams right now.

Alfa Romeo, Haas, Alpine and Williams have less than 5% of players’ faith and each are tied as the least selected constructor.