Formula 1 is holding its first ever sprint races this season. We’ve had two already, and both have lead to huge moments in the 2021 championship fight. The new qualifying system has been brought in to encourage more spectator interest with a short race on Saturday – approximately 1/3 of a normal grand prix length – which then sets the grid for the normal Sunday race.

The first outing was deemed an overall success by FIA head honchos, drivers and teams alike – with Fernando Alonso standing out with a typically bombastic performance dragging himself from 11th to fifth.

A sequel at Monza was a safe follow up but didn’t set the world on fire either. Despite that, F1 bosses are still positive about the new addition to the race weekends and are excited about the prospect of more next season.

“I’d buy a ticket for that every day,” Ross Brawn said. “So I think we’re very pleased. I think one of the things we all saw today is a racing driver is a racing driver. And they’re never going to take it easy. So lots of action through the field. I mean, that first lap or so was completely nail-biting, sensational. Then we had the little duels in the rest of the race.”

The third appearance of the format will happen this weekend at Interlagos for the Brazilian GP on November 13.

Below you can find the the rules and regulations of the Formula 1 sprint races, including format, points and race dates.

What is a sprint race?

Sprint races add a new element to the traditional Practice > Qualifying > Race format of a Formula 1 weekend. They are being trialled for the first time this year to decide the grid for the grand prix, in an effort to increase on-track action throughout the weekend.

While the format F1 uses isn’t quite the same as those utilised in Formula 2 and 3, the intention is similar: to shake up the order and provide more racing value for money to fans.

The races are shorter than the usual format and, whilst the winner is awarded championship points, the race’s main aim is to decide the grid for Sunday’s full-length race.

The sprint races run to 100km (62 miles) so, depending on the circuit F1 is using on a sprint race weekend, lap count varies. The Brazilian GP this weekend, the sprint race is set for 24 laps – for comparison, the Silverstone iteration was 17.

Qualifying takes place a day earlier than usual, on the Friday of the race weekend, and the results setting the grid for the sprint race on Saturday. The finishing order of the sprint race itself will then decide the starting order for Sunday’s race, which will still award full points and run to the usual distance and lap count.

The sprint race winner is credited as the polesitter, not the driver who is fastest in the Friday qualifying session – who is dubbed ‘Pirelli Speed King’.

Only the top three finishers in the sprint race are awarded points. The sprint race winner receives three championship points, the runner-up gets two and third place earns a single point. Saturday’s victor is also given a commemorative garland, in a throwback to F1’s ‘Golden Era’ as well as a celebratory lap of the track on F1’s ‘Crypto Truck’.

Tyre restrictions are different during sprint qualifying weekends. Teams receive 12 sets, rather than the standard 13 and must only use soft tyres in qualifying, unless the session is wet.

The biggest change from a normal F1 weekend is that tyres used during qualifying do not have to be used in the race. There is a free choice of tyres for both the sprint qualifying on Saturday and the grand prix on Sunday.

Parc fermé restrictions now come into effect on Friday ahead of qualifying, instead of Saturday as it would on a normal weekend. This is done to prevent teams from setting up their cars specifically to take advantage of the format.

These rules are “designed to increase the on-track action and engage fans in a new and innovative way,” says to F1’s commercial rights holder, Liberty Media.

Three sprint races are scheduled for the 2021 Formula 1 season. The first F1 sprint race took place on the Saturday of the 2021 British Grand Prix on July 17. 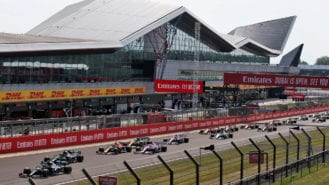 A GP in two parts: what F1's sprint races will look like

After much debate among between the teams, the FIA and the Formula 1 organisation over the past couple of years, Monday saw formal confirmation via a vote of the F1…

The second came at the Italian GP, with the third and final one of the season taking place his weekend at the Brazilian Grand Prix. The Sprint this weekend is set to take place at 7:30pm on Saturday night GMT.

This Saturday’s sprint race will be held on the same Interlagos layout as the full Grand Prix. It will be staged across 24 laps which equates to 103.4km (64.2 miles). The race will last around 30-45 minutes, as long as there are no safety car or red flag delays.

Will there be sprint race qualifying in 2022?

The signs are that Formula 1 will be getting more sprint races next season following the 2021 trials at the British, Italian and Brazilian Grands Prix. While unconfirmed at the moment, there could be as many as seven Sprint weekends next year.

“I’m very pleased with F1’s first Sprint weekend,” Stefano Domenicali said. “Our belief was that it would add more engagement for fans across three days – and it definitely did. I don’t see how it did anything other than enhance the race weekend.

“We’ll go away and reflect on the format in the next week or two. I’m sure there will be things we can pick up with teams and then digest the feedback. It’s a great first step in this experiment, with two more Sprints to come. I want to emphasise that we won’t make a judgment on whether it will be part of our championship in the future until we have done all three Sprints on three different tracks.”

There has also been mention of further possible format tweaks if sprint races deliver on a regular basis.

With Saturday sprint races possibly having an adverse effect on Sunday, the idea has been mooted as to whether let Friday qualifying decide the grid for both the sprint race and main grand prix, and award more championship points down the field for the Saturday event.

“I think that will be probably the key issue, whether we make another step and make it standalone,” Ross Brawn said to Motorsport.com.

“I think that we’ll have to look at the number of points awarded, and how do we determine the starting grid. So should it just be what was done on Friday?

“As you know, [Sergio] Perez dropped out at Silverstone [in the sprint] and then obviously his Sunday race was heavily compromised. So should we determine the starting order on Friday for both Saturday and Sunday?

“There’s a number of things we can do, and number of ways we could do it.”

As mentioned above, the sprint race format was generally well received overall, largely due to the hoped-for action occurring to some degree, and also making both weekends more interesting as a whole, with normal qualifying happening on Friday night.

Leaders Lewis Hamilton and Max Verstappen diced on lap one at the British event, and there were skirmishes down the field which provided entertainment, not least of all Fernando Alonso, who leapt from 11th to 5th in his Alpine then held off both faster McLarens.

“Yeah, I like the format,” said the Spaniard driver. “I think we have action three days, Friday, Saturday and Sunday. So it’s good for the people. Last year when I was watching races at home on Friday meant nothing, because the long runs, they are very important for the teams, the drivers, but not for the people at home, that they were very long free practice, to understand from the outside. I hope we can keep this format.

“I think it’s entertaining for the crowds on the track,” added Mercedes team boss Toto Wolff. “A start is always interesting and good content. And obviously, Alonso was fun to watch. So I think overall, it is a good add-on.”

“I don’t see it at every race. I think there’s too much randomness, but I think if the next few ones go like this one, I think it has a place in the calendar in a limited form.”

The Italian version was a little less enthralling, with the action at the start limited to those near the front squabbling for places. Verstappen showed Hamilton the escape road at the second chicane at Monza, leading to the Mercedes driver losing a place to Lando Norris and getting stuck there for the remainder of the afternoon.

Valtteri Bottas secured pole but couldn’t make it count the next day for victory.