The fight at the front is shaping up to be a titanic one but how about the midfield? So far this season it looks as though in F1 Fantasy terms, the big winners are in the middle of the pack.

Ferrari versus McLaren could decide your weekend but there are other options on the table that could help generate a decent points haul. Alpine might be a sneaky pick but Aston Martin has certainly made strides forward since its struggles during pre-season testing.

The madness of the Emilia Romagna Grand Prix and pre-race downpour threw the cat amongst the pigeons and turned potential star performers into costly liabilities.

So do you go with a big-spending spree to fix any lost points? Can you pick out a few bargains to help make the difference? Or do you hold what you have and hope for a better weekend this time around?

Here are a few things to keep in mind for your F1 Fantasy picks for the 2021 Portuguese Grand Prix.

Two drivers you’ll be hearing about later on, Lando Norris and Charles Leclerc have both risen in price by 0.3 between races. They are the biggest risers since Imola and followed closely by Max Verstappen (0.2).

In teams watch, Red Bull, McLaren and Ferrari have each risen in price by 0.1 since the Emilia Romagna Grand Prix.

Sergio Perez suffered a fair few setbacks during the race at Imola and has subsequently dipped in price by 0.1. Esteban Ocon scored Alpine’s first points finish of the season on the road but has also seen a 0.1 drop in price. Mercedes and Alpine are the two teams to drop in price by the same amount (0.1)

Fernando Alonso was promoted into the points after a time penalty for Kimi Räikkönen but the Spaniard’s F1 return has not been a storming one. He’s dropped by 0.2 between races but isn’t the only one. Daniel Ricciardo, Valtteri Bottas and Sebastian Vettel were each outshone by their respective team-mates and have fallen in value (0.2)

Aston Martin’s drop in performance since its transformation from Racing Point has resulted in a 0.2 drop since last race weekend.

A bit of a toss-up between the two but having one of either Lando Norris or Charles Leclerc looks to be a safe option in terms of a nailed-on points-scorer. Despite the experience gap between himself and new team-mate Daniel Ricciardo, it’s the Australian that has struggled so far this year due to his lack of familiarity with the car and team.

Over at Ferrari, it’s a similar story for Carlos Sainz versus Leclerc. The Monégasque driver pulled out a fantastic lap in Bahrain to put his Ferrari fourth on the grid, probably beyond its true level of pace. 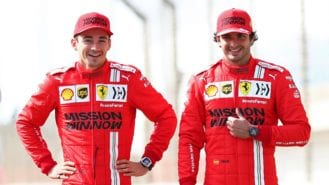 Can a resurgent Ferrari maintain its momentum at Portuguese GP?

Ferrari are on the fightback, and as Adam Cooper writes, despite a long road ahead both drivers are optimistic after improved initial performances

Last season, Leclerc managed a P4 finish in the race with a Ferrari that was underpowered compared to this year’s version. Could he go as well this season? Well, McLaren is likely to go better than sixth and 13th this season, but it was Norris that finished out of the points. Norris had a tough time during practice but the McLaren has much more speed in reserve. The choice will come down to what you can fit into your budget.

If you still haven’t made the switch yet, getting Max Verstappen in for a set-and-forget throughout the year is the safest and most cost-effective option if you’re hoping to bag points for poles and wins.

Red Bull has a plethora of updates for this race weekend and the Dutchman will be there or thereabouts on Saturday and Sunday barring a mechanical fault.

He was eventually forced to retire from the race but Sebastian Vettel had a better weekend of it at Imola despite the no points to show for his efforts. A pre-race brake-fire drama netted him a penalty, but his race pace was solid if not spectacular. Expect him to continue edging closer to the mark against team-mate Lance Stroll, but for now a watching brief is recommended.

Yuki Tsunoda’s F1 debut caught everyone’s attention but the Japanese driver followed up that promising opener with a disastrous sequel at Imola.

The AlphaTauri driver crashed in qualifying and totalled his gearbox in the process, resulting in a grid penalty. He rebounded in the race but a spin on the final race restart after overtaking Lewis Hamilton.

In the pre-race press conference, Tsunoda admitted he’d be dialling back his all-or-nothing approach due to his lack of experience racing at Portimao. He hasn’t raced in any category around the Portuguese circuit and following his qualifying crash is eager to make it to the end with a decent points haul.

The only team to be lapped twice by the end of the race at Imola, Haas drivers Mick Schumacher and Nikita Mazepin are unlikely to be fighting other cars this weekend either. The team has made clear there are no further updates in the pipeline this season so outside of finishing position points, there isn’t much ground to be gained here.

Nicholas Latifi hasn’t out-qualified George Russell once during their time together as team-mates. The Canadian has been closer this season but isn’t the Williams driver you want if you’re hoping to bag a few extra points for starting versus finishing position.

While the Spaniard was happy with making it through his first wet F1 race since returning, Fernando Alonso is still a hefty investment for both Alpine and your Fantasy team at 15.0, he still cuts into a large portion of your funds that are better spent elsewhere. With team-mate Ocon looking the stronger of the two as well at the moment, he’s not a great pick just yet. If you are Alpine-inclined, the Frenchman is the better pick for now.