87, 88, 89… Lewis Hamilton continued his march towards Michael Schumacher’s all-time wins record with another dominant display at one of Formula 1’s iconic venues.

Spa-Francorchamps and its cliched microclimate promised rain throughout the build-up to this weekend, but by Sunday morning it became apparent that a dry race was in store. So with fewer variables, the start was always going to prove crucial. And it was there that it almost went wrong for Hamilton but ultimately went very right.

“That start is a nightmare because it’s one of the shortest runs to Turn One and you saw out of Turn One I had a big snap getting on the gas trying to build the gap,” Hamilton said.

“Even if I didn’t have that, I would have maybe had a car length but he would have eaten that up the straight. It worked to my benefit, that snap, because it meant he was right up my chuff and I’m sure he had to lift. That meant when we got to the top of the hill he didn’t have enough time to slingshot.”

Hamilton had dominated qualifying by half a second with a hugely impressive performance, and Bottas knew the race start was where he stood any real chance of beating his team-mate. Once that moment had gone, the Finn – who had to check up with nowhere to go on the run to Eau Rouge – had little hope. There was a fleeting moment after a safety car restart when Hamilton complained of a loss of power, but it was soon dismissed as energy management that wasn’t an issue, and he eased away once again.

“Out of Turn One I felt I had a better run than Lewis and I had, actually, to lift not to run into the back of him,” Bottas said. “Then I tried to leave a bit of a gap to gain momentum and a good tow but today I was surprised just how small the tow effect was. Maybe with the tailwind into Turn Five made a difference and it was actually the same on the restart. I was hoping to catch him, but I just couldn’t.”

That safety car had been required due to the most dramatic moment of the race. Even when the action doesn’t appear enthralling, at Spa drivers are always being tested by the track, and it bit back when Antonio Giovinazzi got out of shape exiting the Fagnes chicane on lap 10.

The rear of the Alfa Romeo stepped out, the Italian overcorrected and was instantly in the wall with debris flying everywhere. George Russell was the unlucky one of the following group, as Giovinazzi’s left rear detached and took out the front right corner of the Williams.

A red flag was close to being thrown but instead the drivers picked their way through the debris for a lap while the track was cleared, with strategic options being all but wiped out as the majority stopped for a set of hard tyres to run to the end of the race.

The outliers were Pierre Gasly – having started on the hards – and Sergio Perez who was on softs, with both staying out to move up to fourth and fifth respectively. Alex Albon also switched to mediums and in doing so got ahead of Esteban Ocon after the Renault had jumped him at the start.

The other Renault of Daniel Ricciardo had threatened Max Verstappen on the opening lap but settled into position behind the Red Bull, and for a number of laps after the restart Verstappen kept Bottas honest and looked like he might threaten for second place before his tyres started to degrade. And it was his former team-mate who made that all the more troublesome.

“I’m enjoying this music in the background, it was more exciting than my race so keep it going!” Verstappen said once out of the car. “On the hard tyre I was trying to follow Valtteri but then they told him to speed up so I lost a bit of ground. Then with about ten laps to go I started to have really bad vibrations on the tyres and started to have lots of understeer.

“So then we discussed ‘do we do a pitstop?’ but I had Daniel in my pitstop window so I was like ‘Let’s go to the end then and I’ll manage it’. It’s a shame, it’s such an amazing track and you can’t really push. It was pretty boring to be honest. I really enjoy driving here. We do 44 laps and I probably did 38 of them managing a lot so it’s not been the most exciting today.”

Ricciardo would even prove a threat in the closing stages as he upped his pace, clearly confident in his tyres. Running fourth he set the fastest lap on the final lap, taking 4.5 seconds out of Verstappen and ending up a little over three seconds off a podium that would have seen Renault managing director Cyril Abiteboul having to get a tattoo.

Abiteboul might have gladly held up his side of the bargain – a bet he made that relates to Ricciardo’s first Renault podium – as Esteban Ocon backed up his team-mate with his own strong finish. Albon’s medium tyre gamble failed to pay off as he struggled the longer the stint went on, with Ocon pouncing to take fifth on the final lap.

The move was done with DRS on the Kemmel Straight as so many overtaking manoeuvres were completed on Sunday, with Gasly similarly making progress back through the field. He took eighth behind Albon and Lando Norris courtesy of a 17-lap medium tyre stint that saw him on fresh rubber compared to all those who pitted under the safety car.

Norris nearly caught Albon himself in the final laps after muscling his way past Lance Stroll, bringing some reward for a frustrated McLaren. Norris finished where Carlos Sainz should have started, but the Spaniard suffered an exhaust failure caused by a power unit problem on his way to the grid. For the second Belgian Grand Prix in a row, reliability stopped Sainz from completing a lap. 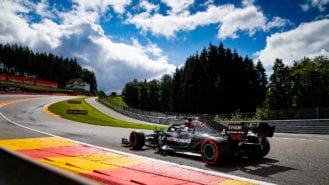 With a pole lap 0.5sec quicker his team-mate's and a car set up for rain, look behind Lewis Hamilton for action in the race after 2020 Belgian Grand Prix qualifying, says Tony Dodgins — there should be plenty

Stroll and Perez rounded out the points but if Racing Point were disappointed with that return it was nothing compared to Ferrari, who were simply slow all weekend. Perez was asked if he expected the Ferraris to climb through the field from lowly grid positions before the race, and after a long pause where he was trying to think of the most polite way of responding, he said no. And he was right.

Charles Leclerc made an excellent start to run eighth on the opening lap but that only served to put him in a position for the lack of Ferrari speed to be brutally exposed. By lap 10, he was back to 12th. He would finish 14th. With Sebastian Vettel only one place better off, it was a dismal day for Ferrari.

“I think on one hand obviously Spa is one of the most power-sensitive tracks and we struggle this year with power so naturally you would expect to fall a bit behind,” Vettel said. “But I think we were even behind the people we were quite a bit faster than, especially on race day in the last couple of races, speaking of Sauber [Alfa Romeo] and Haas, so there’s probably something that is not exactly clear.

“I hope it will be a bit Spa-specific but we have to work hard, there’s a lot of lessons this weekend, and we need to make sure we stay strong, stay together, and do the best we can. We have two important races coming for the team and that’s where we focus on.

“But you also have to be realistic, you cannot expect miracles, the package is what it is, we are not strong as we would like to be. We need to stay optimistic and see the good things even if at the moment they are not many.”

Still, it can only get better. Next up is an even more power-sensitive circuit in Monza, and then we head to Mugello for Ferrari’s 1000th race. Where on recent form, you’d be a brave person to bet against Hamilton matching Schumacher’s 91.