Lewis Hamilton has now won the British Grand Prix for a record sixth time. See the pictures and recall the dramas of every victory at Silverstone 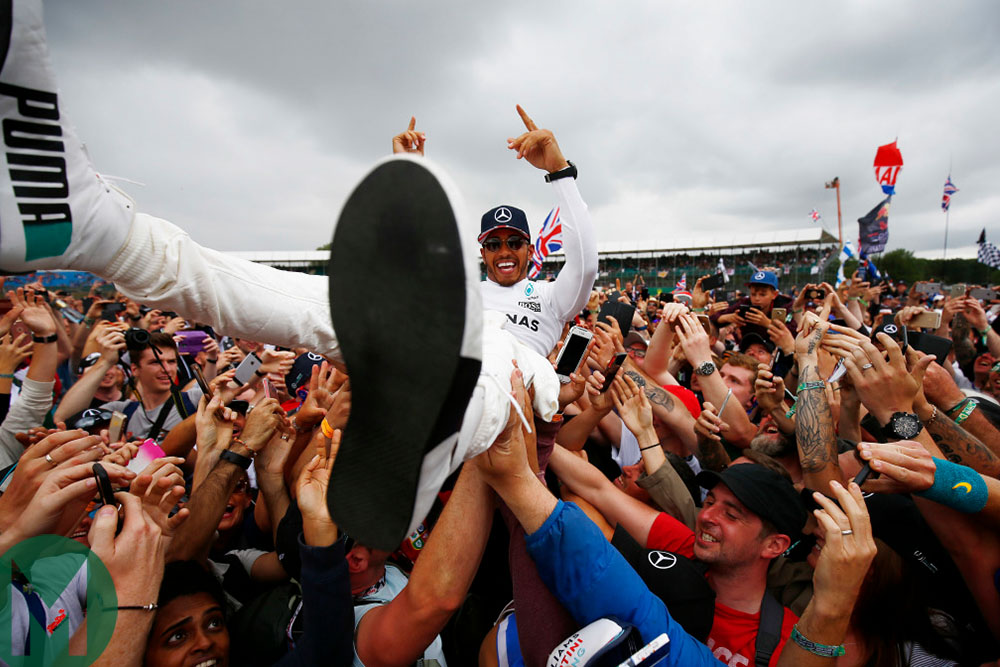 Lewis Hamilton has now won more British Grands Prix than anybody, after the weekend brought his sixth victory in the race.

From his first win, as a 23-year-old, in 2008 to his latest triumph, the sequence of success tells the story of Britain’s most successful Formula 1 driver, as he grew in confidence and experience, demonstrating crushing racecraft, sensational speed, and introducing new celebrations that bring fans closer to the post-race party.

This is the story of Lewis Hamilton’s record-breaking victories in pictures, and from the original race reports. 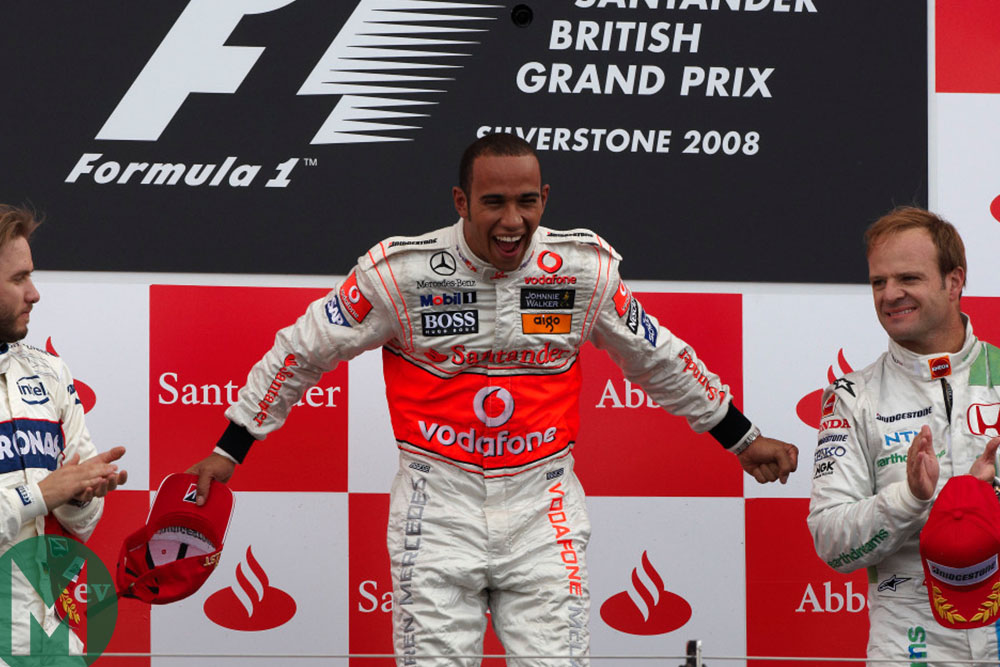 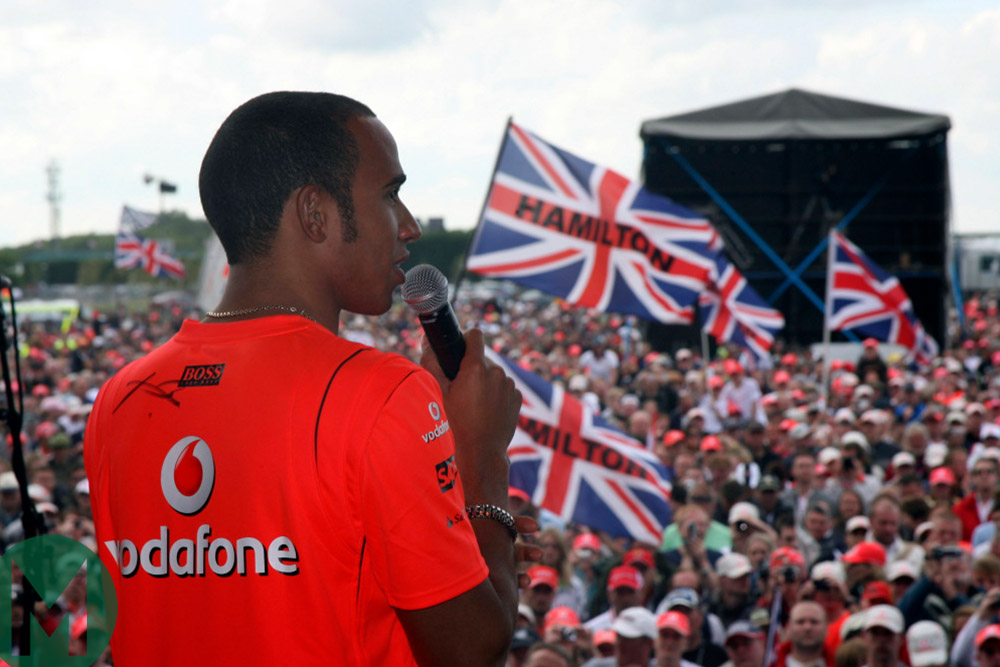 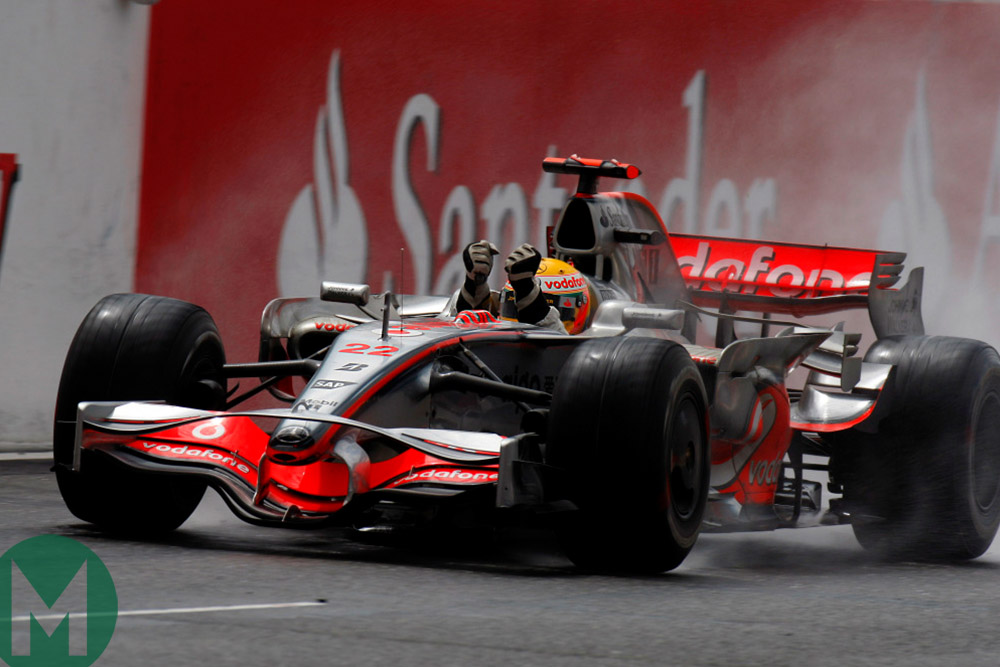 A masterpiece, was Nigel Roebuck’s verdict on Lewis Hamilton’s first British Grand Prix victory, in his world championship-winning year of 2008.

In wet conditions, where more experienced drivers were repeatedly being caught out, the 23-year-old Hamilton drove an assured race to finish more than a minute ahead of the entire field in his McLaren.

On the podium, with Nick Heidfeld to his right and Rubens Barrichello to his left, Hamilton soaked up the cheers of his home crowd; acclaim that he wouldn’t hear again for another six years. 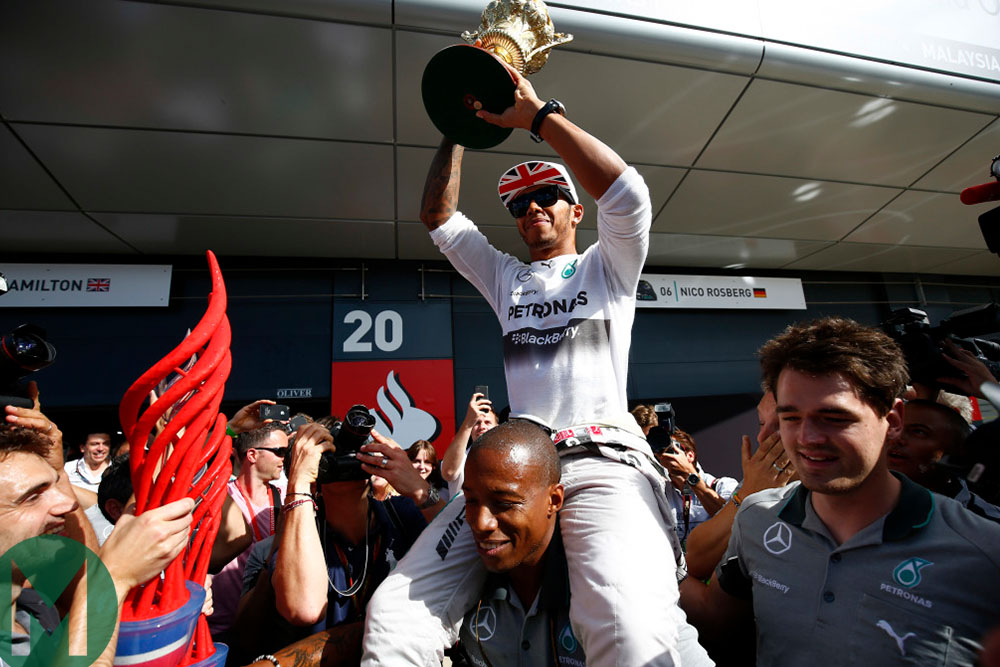 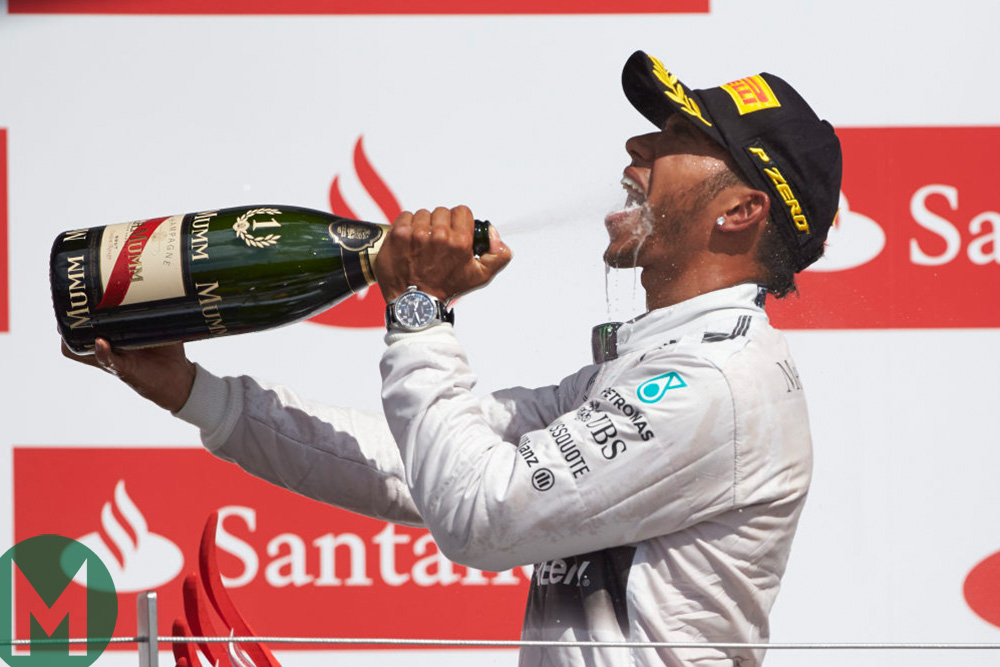 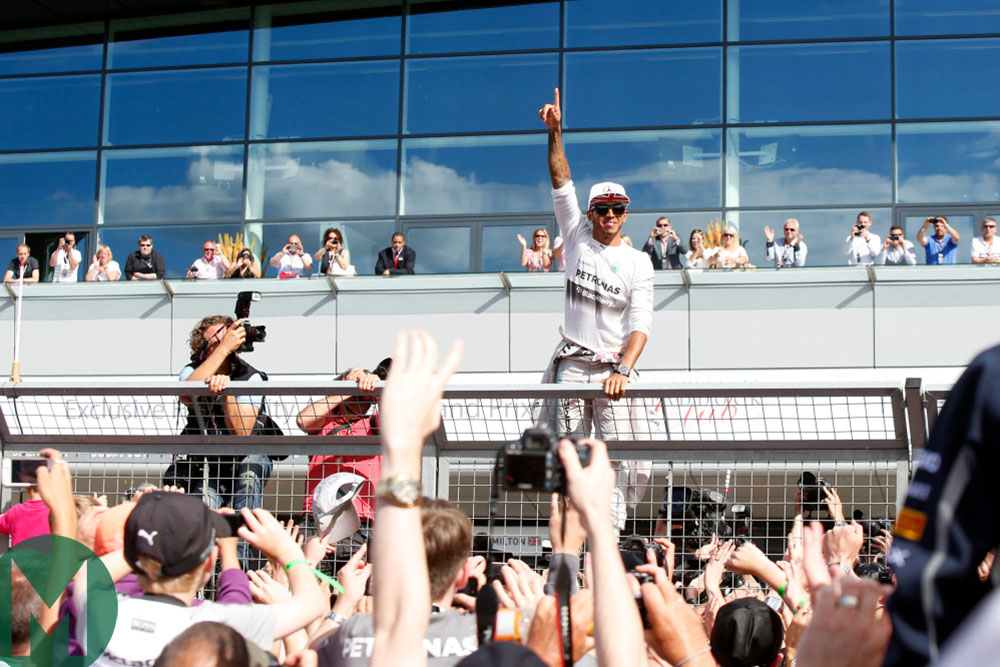 A rare qualifying misjudgement from Lewis Hamilton left the Mercedes driver — in his second season with the team — starting from the third row of the grid, while his team-mate and chief title rival Nico Rosberg started from pole.

But anyone writing off Hamilton hadn’t reckoned on his searing pace. The race was red-flagged on the first lap and delayed after Kimi Räikkönen crashed heavily on the Wellington Straight, but Hamilton maintained focus during the delay of more than an hour before the race was restarted.

Springing away from the lights, he dispensed with the cars ahead, and was in second place, with a five-second gap to Rosberg on lap four. The crowd thrilled to the chase that Hamilton had begun, as he hunted down Rosberg, shrugging off a pitstop delay, to bear down on the German.

Sadly, a gearbox failure robbed fans of a duel for the lead, leaving Hamilton to pull out a crushing 30-second lead over the eventual second-place finisher Valtteri Bottas in a Williams. The celebrations at the end showed that they weren’t too disappointed. 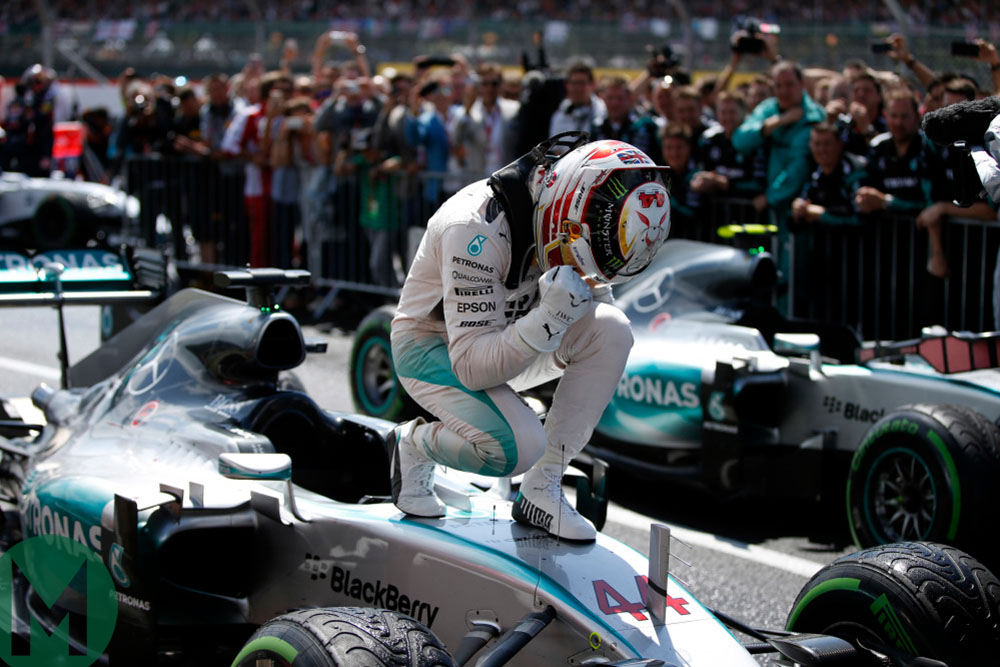 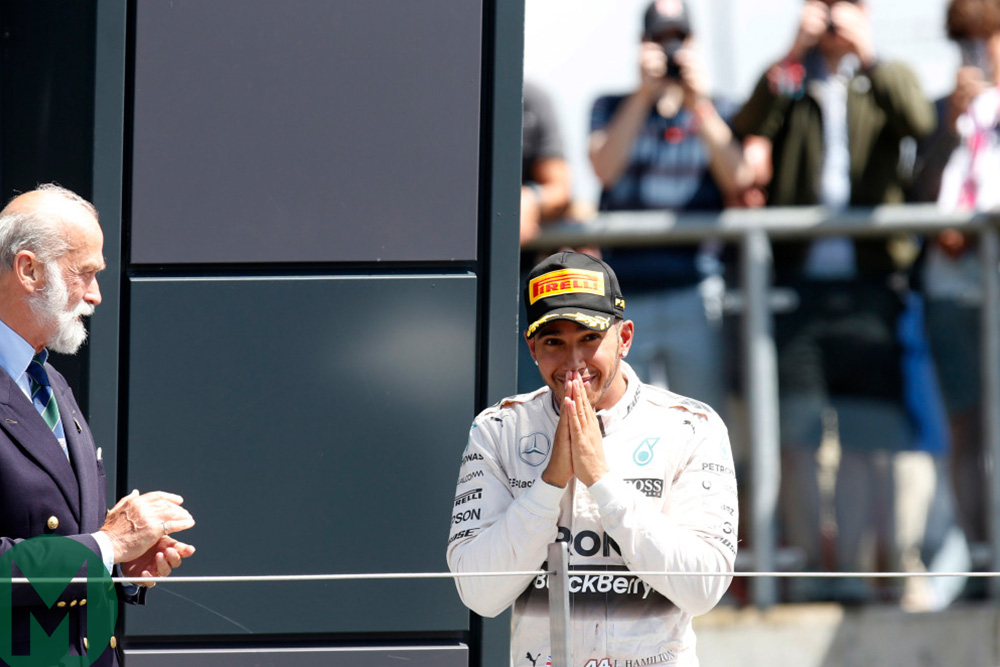 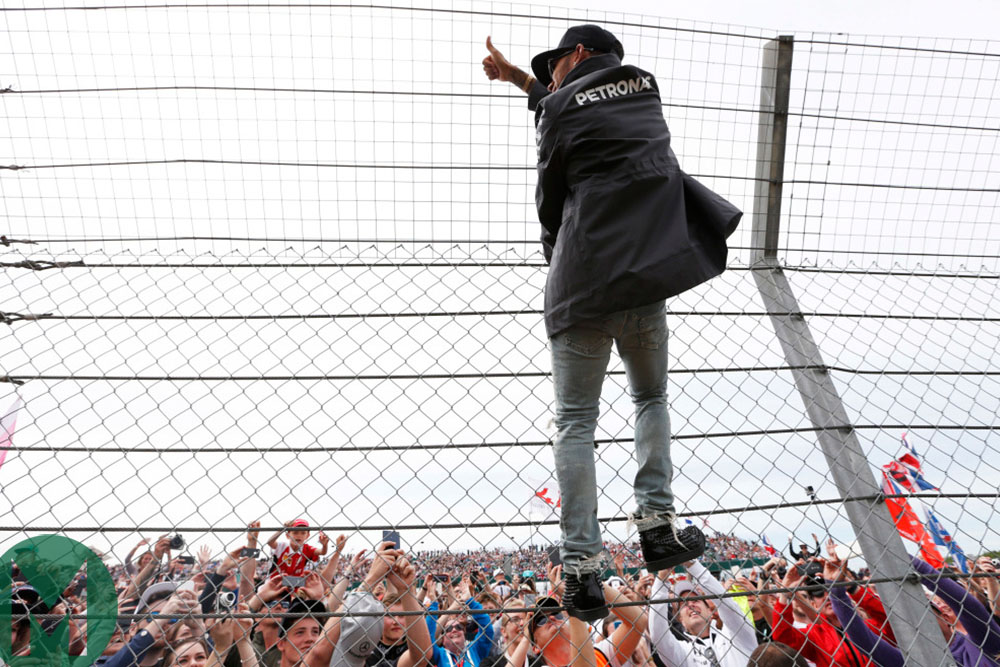 Rain again marked a Hamilton victory at Silverstone. Williams took an early 1-2 lead in the race but Mercedes’ devastating tactical superiority in the pits, enabled Hamilton to take the lead, with both Williams’ providing a buffer between him and team-mate Rosberg.

It looked like another easy win for the Englishman until the rain arrived on part of the track. With fresher tyres, Rosberg had more grip on the damp track than the cards ahead and quickly began to gain ground, passing the Williams then closing in on Lewis in front of a horrified crowd.

This was the moment for an instinctive decision and Hamilton dived into the pits just as the heavens opened. His new green intermediate tyres were perfect for the conditions, unlike Rosberg’s slicks, which forced him to slow: win three at the British Grand Prix for Hamilton, and an emotional one judging by the podium pictures. 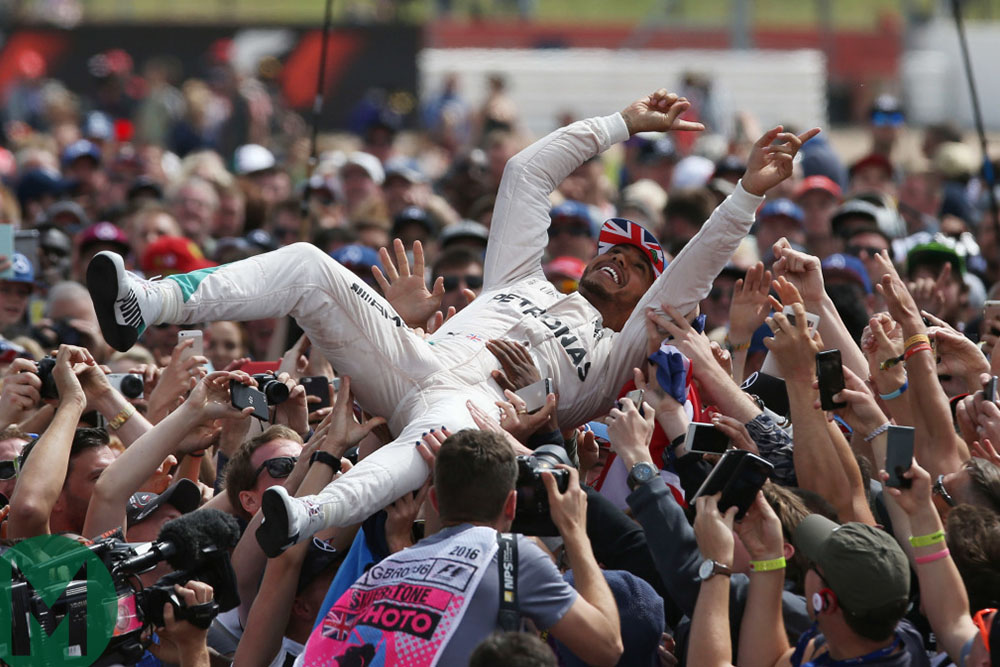 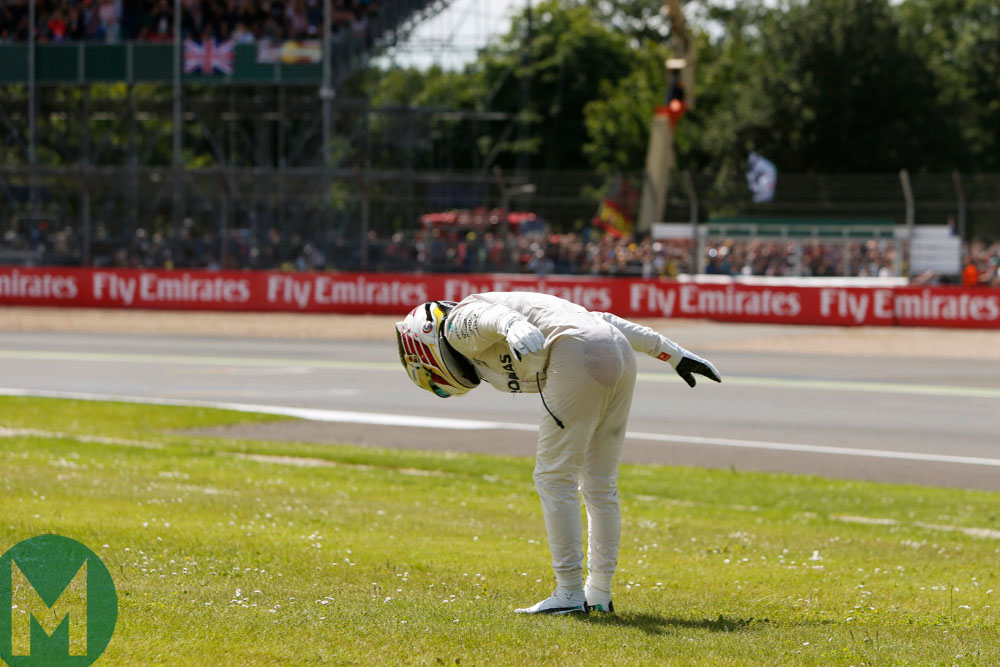 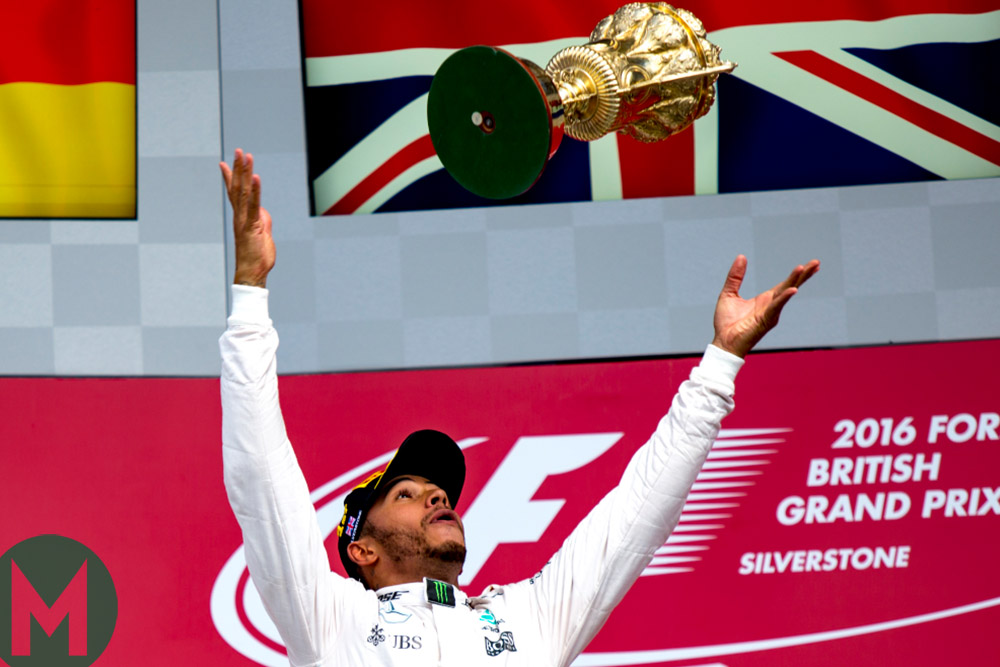 Starting behind the safety car (thanks to more rain), the Silverstone crowd were forced to wait for Hamilton’s crushing display of superiority in 2016.

When the safety car pulled in, he disappeared into the distance, with a lead of two seconds before the end of a single racing lap.

Behind Hamilton, Max Verstappen battled with Rosberg for second, but the Brit was untouchable. “I just couldn’t reach him this weekend,” said Rosberg, who would go on to win the championship that year.

Hamilton lapped up the plaudits and put on a show for the ecstatic fans: bowing to the grandstands, hurling the Royal Automobile Club trophy into the air and crowd surfing for what was thought to be the first time at a Grand Prix. 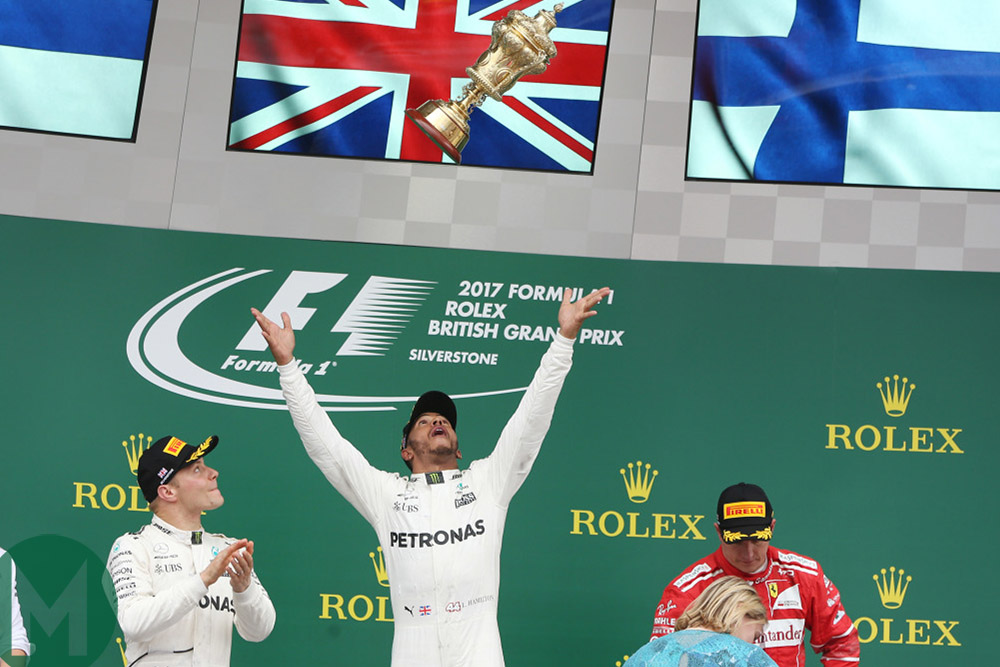 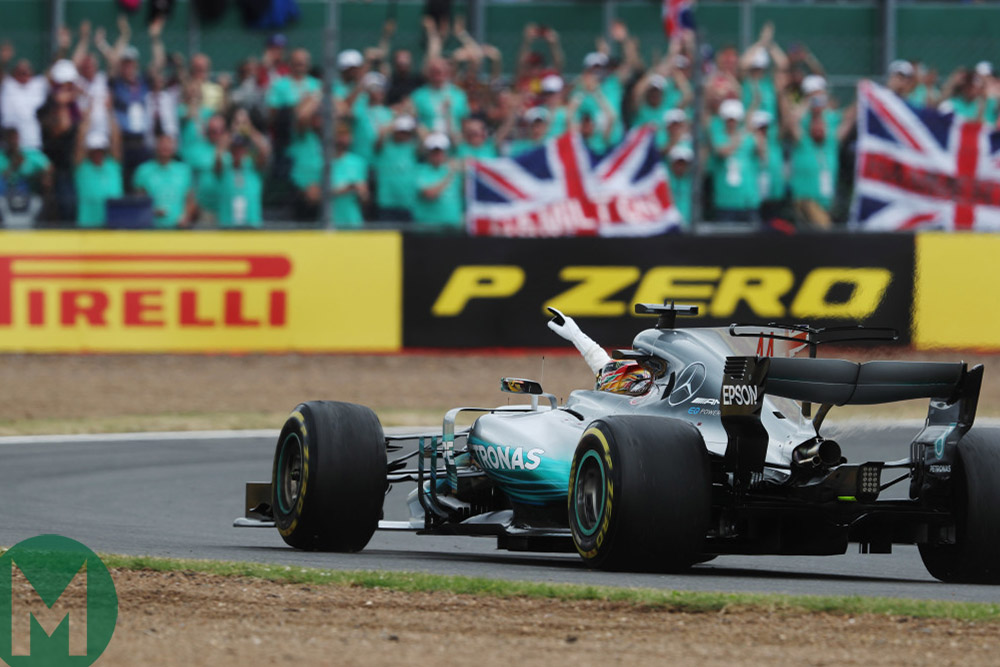 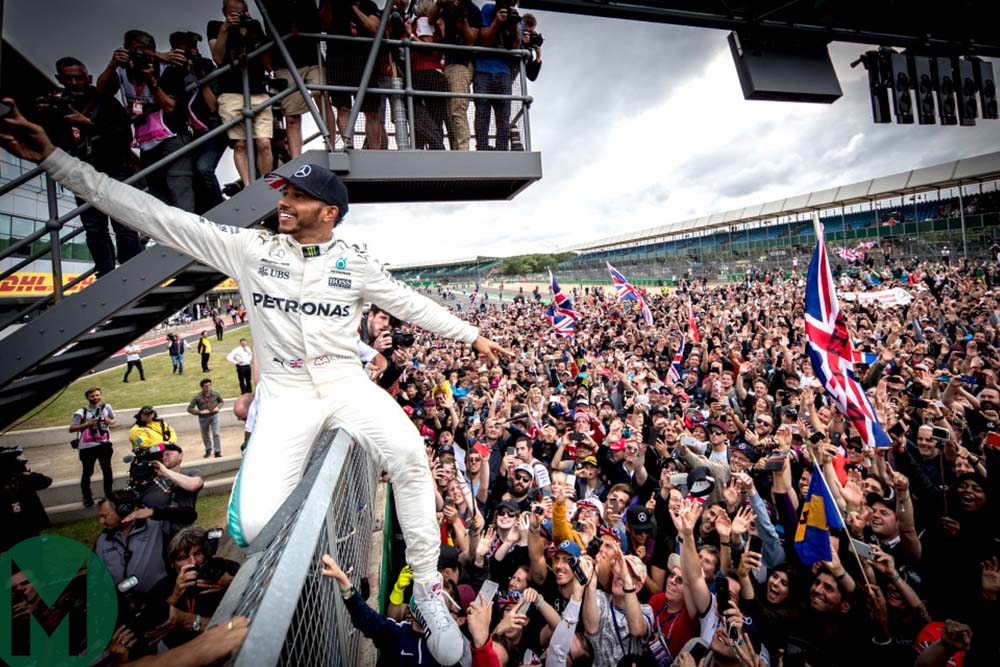 2017 was the year in which Hamilton perfected his trophy throw, sending it high above the podium next to a nervous-looking Valtteri Bottas. This was the year that Hamilton really was the master of Silverstone, as he equalled Jim Clark’s record of four consecutive grand prix victories.

Leading from the lights, Hamilton maintained a steady gap between himself and the Ferraris behind. Not only could they fail to keep up, but the effort made by Vettel and Räikkönen to close the gap destroyed their tyres in the closing laps, leaving the path clear for Bottas to drive past and secure a Mercedes 1-2.

At the chequered flag, Hamilton knew what he needed to do, with a fan-pleasing throw of the trophy, selfies with the spectators and more crowd surfing. 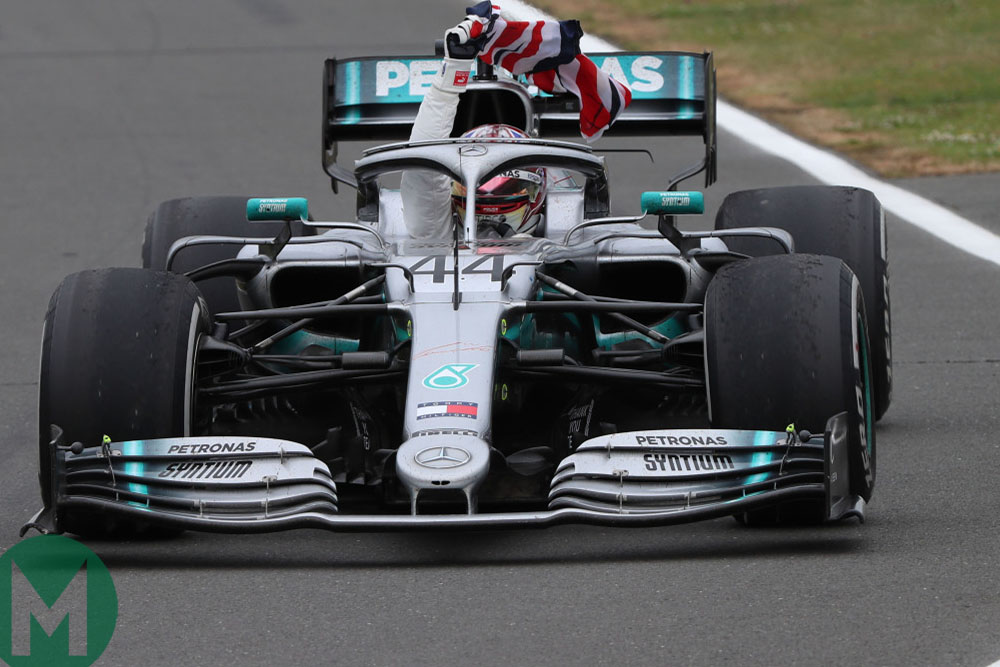 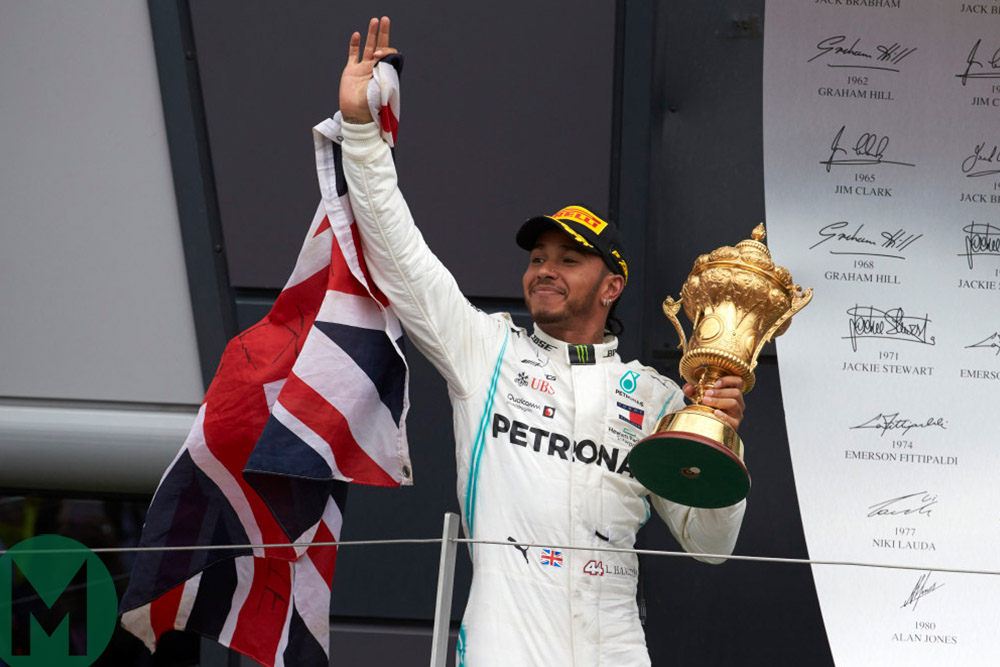 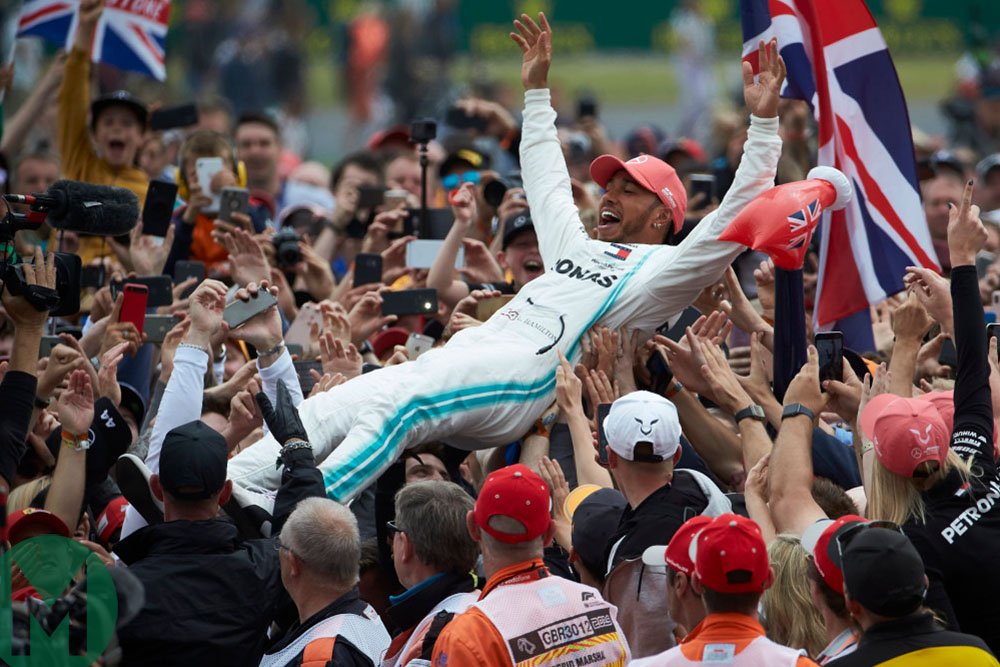 Cunning, spectacularly quick and lucky to boot: Hamilton’s win this year was the more remarkable for just how much he had in reserve.

Despite Bottas qualifying on pole and taking the lead at the start, Hamilton had the tactical advantage, thanks to a strategy that he had kept from his team-mate and even Mercedes. The British driver had calculated that he could complete the race with just one pitstop, while maintaining a similar pace to the two-stopping Bottas.

The trap was set, but a lucky safety car, which was deployed just after Bottas had pitted, effectively gave Hamilton a free stop, so that he could breeze past his team-mate.

It meant that Hamilton also advanced past the five-times race-winners Jim Clark and Alain Prost to become the only driver to win six British Grands Prix, grabbing a Union Jack on the slowing down lap to ensure that his celebrations – as with his performance – were on point.