The fairytale played out. Pierre Gasly, the demoted Red Bull driver, pounced upon a series of lucky breaks to deliver a brilliant pressure victory drive at the same venue as the junior Red Bull team’s only other previous win, 12 years ago with Sebastian Vettel.

It wasn’t going to happen this way. Ordinarily, it would have been a routine Lewis Hamilton victory drive from pole. But there was some randomising mischievous gremlin in the Monza air.

For the first 18 laps, Hamilton danced away from Carlos Sainz’s McLaren who in turn edged away from team-mate Lando Norris. Valtteri Bottas had made a terrible start from the outside of the front row and had completed the opening lap sixth. Worse than that, his Mercedes was understeering horrifically through right-handers – i.e. most of the corners of the track – for reasons that were not immediately apparent. Similarly, Max Verstappen was running eighth and soon enough wouldn’t be running at all.

That’s how it was going to be: Hamilton, Sainz and either Norris or Sergio Perez’s Racing Point taking the final podium place.

But then things started happening.

The AlphaTauris were difficult beasts to decipher around Monza, very fast on Friday, vying for ‘best of the rest’ with McLaren and Red Bull, but only so-so in qualifying, with Gasly 10th, Daniil Kvyat 11th. Which gave Kvyat the free tyre choice denied to Gasly, who was obliged to start with the softs on which he’d graduated from Q2. Kvyat chose hards.

They ran nose-to-tail in grid position pretty much from the start. Until Gasly’s tyres began to wilt and Kvyat was being held up. This is spoiling my strategy, he pointed out to the team, not unreasonably. You need to move him aside. Lap 16-17 and he was becoming quite insistent. “Come on, it’s decision time.”

The situation was resolved by AlphaTauri pitting Gasly out of the way, maybe one or two laps earlier than planned. As he rejoined just four from the back, Gasly was angry. “What the hell was that? We couldn’t have stopped at a worse time.” A lot of competitive tension in the Red Bull junior team, as is tradition.

But just behind him, his beautiful day’s destiny had actually just clicked into place.

Kevin Magnussen’s front wing was pincered at the first turn, just one of those things where three couldn’t squeeze into two. He pitted at the end of the lap for a new one and had a set of hard tyres fitted. He rejoined without prospect but began lapping really rather quickly for a Haas. Then it stopped. Magnussen rolled it to a silent halt on the inside of Parabolica, just a few seconds after Gasly (and Kimi Räikkönen’s Alfa Romeo) had pitted. It had to be pushed to the nearby pitlane, which meant a safety car and a closed pitlane.

Mercedes didn’t realise the pitlane was closed and pitted Hamilton (Alfa did the same with Antonio Giovinazzi). Which earned him a 10sec stop/go penalty – which cannot be taken under the safety car. Which meant, with the bunched up field, he’d be rejoining at the back, over 20sec off the back of the pack, well over half-a-minute adrift of the lead.

The others pitted when the pit lane was opened apart from Lance Stroll, who stayed out. As the safety car came in Charles Leclerc finally forced his Ferrari past the Alfas. Then crashed heavily at Parabolica. Which brought out the red flags.

What this did was allow Stroll to have his Racing Point’s tyres changed without a pit stop. On the restarted grid Hamilton sat on a doomed pole, knowing he’d be coming straight in. Stroll was alongside him. But Gasly’s early stop and the others pitting later had jumped him all the way up to third. The Alfas were next, but were never going to be a factor. They weren’t fast enough – barely even any faster than a Ferrari. Besides, Giovinazzi had that stop/go to take. Only then sat a furious Sainz, convinced the red flag had ruined his chance of victory. 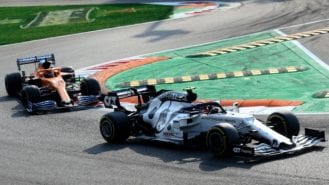 2020 continues to be one of the strangest years in living memory, and from a sporting perspective, the podium at the Italian Grand Prix certainly fits that description. After a…

Actually, he’d still have needed to have found a way past Gasly even without the stoppage.

Gasly stayed tight in Hamilton’s tow off the restart, straight past the wheel-spinning Stroll who was also passed by the newly soft-tyred Alfas. On cold brakes, Stroll went straight on at the Roggia chicane, rejoining only to lose out in a scrap with Sainz. Hamilton took his penalty, Giovinazzi would be in for his soon enough.

Räikkönen was feisty on his soft tyres and Sainz had to work hard and go wheel-to-wheel through the first chicane to claim second, 4.3sec behind Gasly and 19 laps to go. It was a similar story with Kimi and Stroll up to Roggia a little later. After this starring cameo, Räikkönen was quickly demoted by the faster cars of Norris, Bottas, Daniel Ricciardo, Esteban Ocon, Kvyat and Perez. Hamilton made up the chasm to the back of the pack and began going through the pack like a hot knife through butter, cooling problems or not.

And that was the race set, as Sainz chased for all he was worth and Gasly stayed focussed and calm, marshalling his resources. There was really very little rubber left on the AlphaTauri by the closing laps, but the McLaren didn’t react well to being in the close slipstream and like that they cancelled each other out.

Gasly took his enormously popular maiden victory and 25 points (the fastest lap point went to Hamilton, who pipped Ocon for seventh on the last lap.