He’s been replaced by Robert Kubica for 2019, but rookie Sergey Sirotkin’s performances should have led to a second season 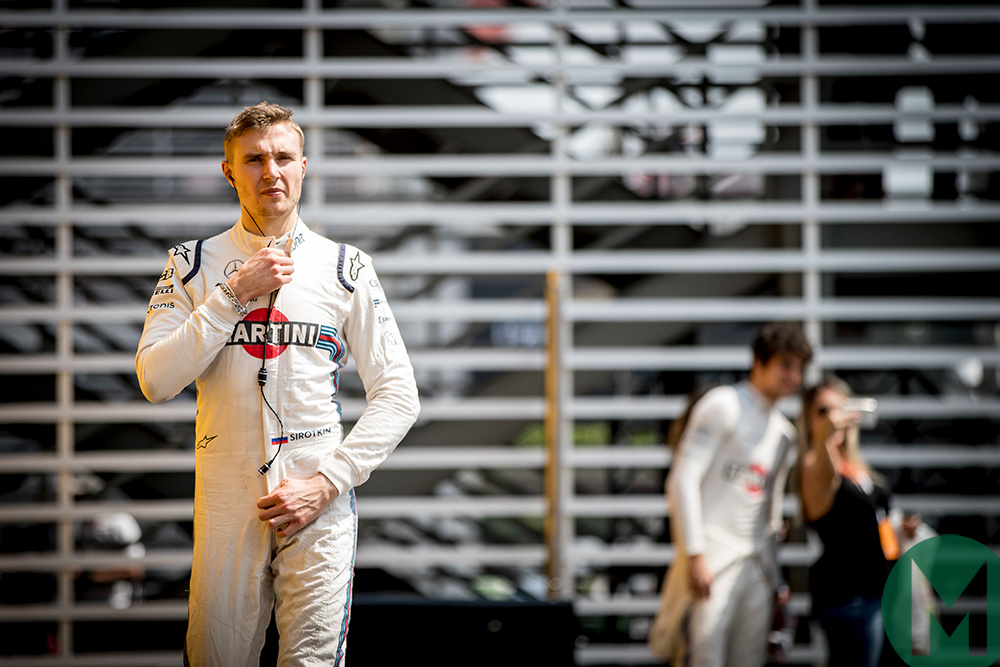 Sergey Sirotkin’s statement on Twitter reacting to the news that Robert Kubica will be stepping into his Williams seat next year was appropriately gracious, but the gaps between the lines don’t need to be scrutinised that hard to discern his frustration.

“Dear friends, unfortunately I won’t be racing in Formula 1 next year.

“It was a very long and tough year, not everything went as I wanted it to be, but I kept working and gave all my energy and all my heart to achieve what I feel we deserved to and if I am honest, I do believe we did a very reasonable job in the current situation we found ourselves this year.”

Amid all the celebration of Kubica’s remarkable return to full-time F1 after so many years of recovery, it’s too easy to overlook Sirotkin. In his rookie season, with no experienced team-mate to provide a technical baseline, he has, several times, put a disastrously uncompetitive, aerodynamically flawed car into positions that flattered it.

It’s ironic some were decrying Williams taking Sirotkin as a ‘pay driver’ when their preferred choice (Kubica) brought money on the same basis.

The FW41 is weak under braking (because its aero platform is intolerant of pitch and dive) and drastically lacks rear-end stability. That trait is locked into the car’s basic hardpoints and arose from a blind spot in the team’s analysis of tunnel numbers hitherto unexposed.

The car was an aerodynamically ambitious design, essentially incorporating Ferrari’s 2017 concept and very different from the lineage of cars that began with the FW37 of 2014. The more aggressive workings of the aerodynamic concept exposed the weakness in that data analysis in a way the older cars did not. So Sirotkin found himself, throughout his F1 rookie year, in a car with which Kubica himself described as ‘nearly undriveable’.

In Brazil, as always, it had no right to be anywhere other than at the back of the grid – as just a cursory trackside observation would confirm. Yet Sirotkin qualified it 13th fastest in that session with a great lap that got him through to Q2 with ease. Yes, it had Mercedes horsepower to help him up the long hill that ends the lap and down the following straight – but so did the Force Indias, a vastly better car.

His lap was on the same tenth of a second as those of Esteban Ocon and Sergio Pérez. He might have matched that position in Q2 but for Lewis Hamilton’s mix up over territory, trying to dive out of the way too late. The root of that was Williams had been totally caught on the hop by Sirotkin’s Q1 performance – and, not expecting to make Q2, did not have his Q2 tyres in the blankets soon enough! So with under-temperature tyres, he had to drive a very aggressive out-lap, catching Hamilton by surprise.

At Monaco, on a track not as demanding of the aero, but still punishing of the sort of rear instability the car possesses, Sirotkin was superb. His throttle control in manipulating its attitude with precision and commitment, right up to the guardrails, was a big part in where the lap time was coming from – and he only narrowly missed Q3, putting the Williams ahead of cars it really shouldn’t have been. He was on great form in the similar demands of Singapore.

He didn’t always reach such heights. But that cannot reasonably be expected of a rookie in such a situation.

He remained calm and focused in very trying circumstances, set a new high-mark in Williams’ technical aptitude test (previously held by Nico Rosberg) and he’s the sort of technical driver that would only get better with experience.

To label him a pay driver is grossly misleading – his performances got him the backing of a sponsor he could take to teams, in much the same way Ronnie Peterson, Niki Lauda, Michele Alboreto and others did in the past. They then take their salary from the sponsor. It’s ironic some were decrying Williams taking Sirotkin as a ‘pay driver’ when their preferred choice (Kubica) brought money on the same basis.

If it were judged on performance alone, he has done comfortably enough to justify his place on the F1 grid for another year. But it’s not to be. So what is his future? He still has the backing of the Russian SMP bank, even if it was no longer prepared to match its 2018 spend (which is ultimately what lost him the drive).

What if he were to take SMP’s backing to get himself a good ride in the Indy 500? Sounds radical, but with the Alonso-assisted spotlight upon the great event, he could yet rescue something from this situation. What if he could not only get himself into a competitive team but also secure the Honda motor unavailable to Alonso? Feasible? Maybe not, and perhaps the Russian backing in an American event could be problematic in the current geopolitical climate. But he’s quick and technical enough that, with sufficient preparation, he would shine.

Kubica’s comeback is fantastic news. But, in the process, F1 has lost a driver deserving of another chance.