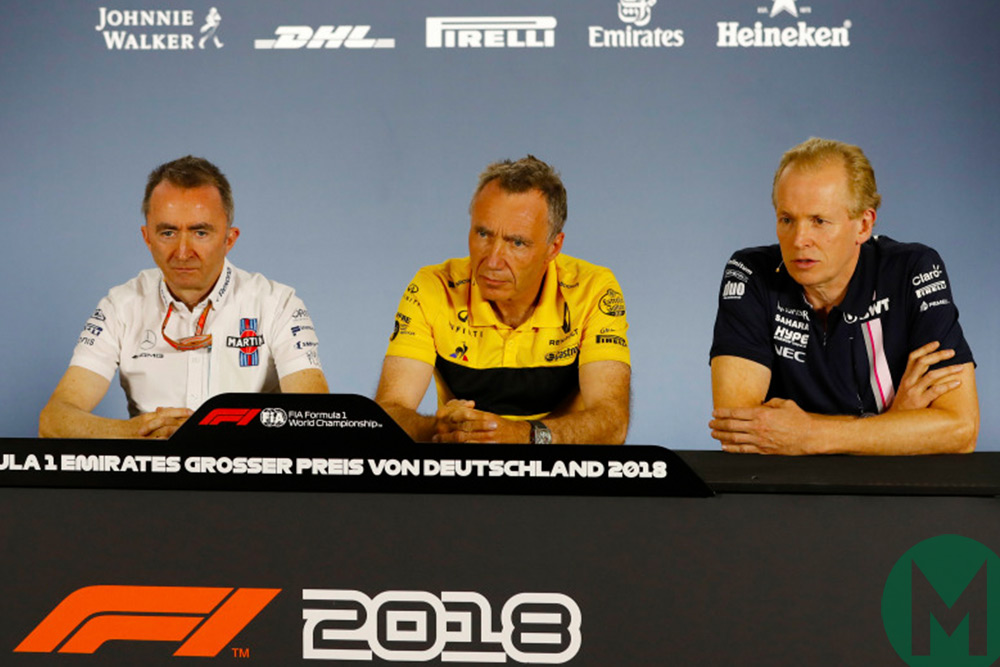 What should have been a relatively straightforward change of ownership for the Force India team after entering administration last week has been complicated significantly by the actions of Williams, McLaren and Renault. These three teams are seeking assurances that Force India will not become effectively a Mercedes B team. Not because Mercedes is one of the bidders (it is not) but because of an agreement that was in place between Force India and Mercedes for 2019 even before the team went into administration for a tunnel share and aerodynamic support package very similar to the one that Haas has with Ferrari.

The legal technicality of whether Force India was at any point insolvent has potentially allowed any of the other teams the power to prevent the newly owned entity acquiring the millions of FOM payment money earned by Force India. For the new entity to continue to receive Force India’s payments (based on finishing fourth in the constructors championship) might require the unanimous consent of all the other teams (depending upon whether the team was ever actually insolvent).

So these three teams have used the opportunity of the proceedings to try to prevent what seemed to be happening before it went into administration – ie it adopting the Haas model.

A little plug-in bunch of racers, if efficiently managed, can run rings around the medium-sized teams

The Haas model is an existential threat to independent teams in that it can plug a little racing team of a couple of hundred people directly into a big factory development programme without anything like the costs teams such as Williams or McLaren will incur in trying to match the big factories. Even Renault, a relatively small factory team that does not enjoy anything like the budget of Mercedes or Ferrari, is struggling to compete.

Force India has for years been working wonders with a small, lean and smart operation. With a staff of around 400, which is less than half of Mercedes or Ferrari, it has contracted out a big proportion of its component manufacture. It doesn’t make its own gearboxes (buying them first from McLaren, latterly Mercedes), suspension, pedals etc. There are whole departments it doesn’t have compared to a big team, or even a medium-sized one like Williams. But it has its own aerodynamic department and pays for time in the Toyota wind tunnel in Cologne.

Haas is around half the size of Force India, contracts out completely the building of its car (to Dallara), not merely the components, and it shares Ferrari’s wind tunnel together with a technical back-up programme that includes aerodynamic support from Ferrari personnel. It can be readily appreciated just how that shortcuts much of the massively expensive research and simulation programmes that would otherwise be necessary to be competitive.

The consistent speed of the Haas this year – it’s regularly the ‘best of the rest’ after the big three of Ferrari, Mercedes and Red Bull – has only intensified the paranoia of teams such as McLaren, Williams and, yes, even Renault. A little plug-in bunch of racers, if efficiently managed, can run rings around the medium-sized teams that are structured around all these extra departments and hundreds of extra employees.

As such, these medium-sized teams are staring at potentially being at the back, receiving ever-fewer payments, being ever-less attractive to sponsors if other teams are allowed to follow the Haas model. Hell, Force India has been whupping them for the last couple of years even with the structure it has. Becoming yet-more tied in to Mercedes would presumably just see them even more competitive.

You can see where this is going. Ferrari could have Haas and Sauber as their satellite teams, Mercedes could have Force India and Williams while Honda and Red Bull has Toro Rosso. Renault and McLaren would be left out in the cold, with not enough investment to bring either of them up to the standards set by the bigger spenders.

So the budget cap of 2021 will cure this, right? Maybe. One way of still spending the $400 million budgets under a $150 million budget cap would be to spread it out between your satellite teams, wouldn’t it? With each working for the benefit of the others.

It all underlines yet again that F1 is now controlled by the manufacturers.