With an F1 calendar of sorts beginning to evolve, and the scheduled beginning of the season little more than a couple of weeks away, focus is finally coming back to the likely competitive prospects. Which is where we’d left it after winter testing, but with an interesting twist: we don’t know how many races there are going to be. But certainly significantly fewer than the 22 that had been scheduled. Which potentially makes the outcome more unpredictable – a couple of results against the run of competitive play becomes much more difficult to correct.

The picture from testing was predominantly silver, making Lewis Hamilton even more of a pre-season favourite than he already was. The most viable pretender to his throne is generally assumed to be Red Bull’s Max Verstappen and with the first two races of the eight so-far confirmed set to take place in Austria – where Verstappen has won for the last two years – that’s got a certain logic.

But… which car is more likely to be as fast as Hamilton’s Mercedes over the season? Verstappen’s Red Bull or… the other Mercedes? The answer to that is not clear-cut. Can Valtteri Bottas step out of Hamilton’s shadow in his fourth season alongside him? It’s not an entirely crazy thought. It took until the Canadian Grand Prix last year – round seven – before Hamilton began to grind out a significant performance advantage over Bottas. Round seven this year would take us to Spa. There was a point in the first part of the season where Bottas had scored three consecutive poles and if luck hadn’t been against him, he could feasibly have been 5-0 up on race wins to Hamilton. But then Lewis got into his stride.

“I have a couple of new things in my driving style toolbox that I could use.”

This, after all, is Lewis Hamilton, one of the all-time greats. Beating him over a season in the same car isn’t a notion to be casually embraced. But it’s been done before. When Nico Rosberg did it in 2016, it was largely because Hamilton suffered three crucial mechanical retirements – and there just weren’t enough races to claw back that damage.

Which brings us back to the point about the likely reduced number of races this year. With just a couple of unlucky breaks for Hamilton and a Bottas beginning this season as strongly as he did last, the possibility of a shock outcome would suddenly become very real.

But he’s still improving too, still finding ways to trim away the shortfalls to his illustrious team mate. “He tends to find time on me in the braking phase of a corner,” said Bottas recently. “I tend to make the corner last longer – and that has an effect on the tyres.” It’s something he’s been working on. “I feel with the things that we’ve been working on with the team and with my core engineering team in terms of my driving style, I have a couple of new things in my driving style toolbox that I could use. I could prove that in Barcelona testing – I could feel in some types of corners I made good steps, and I’ve been focusing on that during the lockdown, driving other things. So just consistency and being on it, that’s going to be the key and we need to keep on, not to be overdoing things, just trusting your own skills and the team around you. I’m sure we can do that.” 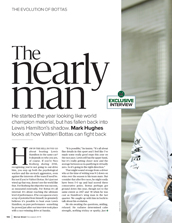 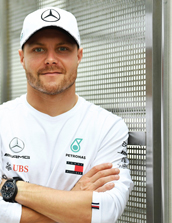 When I interviewed Bottas for the magazine last year, it was very apparent how his quest is for performance from within himself. For his predecessor Rosberg, the quest was success and, in recognising he could not beat Hamilton behind the wheel, to step up the psychological warfare and the on-track aggression – even if that came at the expense of the team. Bottas’ personality would simply not allow that. For him, it must come purely from his own performance. “Yes, [Hamilton] is the toughest the team mate there is, I think,” he said in that interview. “Not because of the way he is as a person, just as a driver. But I wouldn’t want it easier. I want the challenge. When I’m able to be ahead and beat him – which I can do – that’s many times better than beating someone else.”

It’s within him. He can do it sometimes. Last year in qualifying for Shanghai or Barcelona, for example, Hamilton just couldn’t match his pace. Why did it happen like that sometimes, but not others, I asked?  He paused a while before replying, “I wish I had the answer to that question. Sometimes when you step in the car you are just on it and feel so comfortable. You can push it to the limit immediately on the first lap. Even though you’re guestimating a bit the braking points and grip. But you just know where to brake and how quickly you can turn in. I think that comes from human performance when you’re at your best and so comfortable with everything.”

His mentor Mika Hakkinen is obviously going to be pro-Bottas, but he has never been so publicly gung-ho about his prospects. “Valtteri has a great position in Mercedes,” he said recently. “He’s a mega-great driver. I am confident that he is better than ever, so I have an extremely high expectation for him to be world champion this year. That’s what we’ve been working very hard on for years, all the qualities, all the tools for him to get there.” 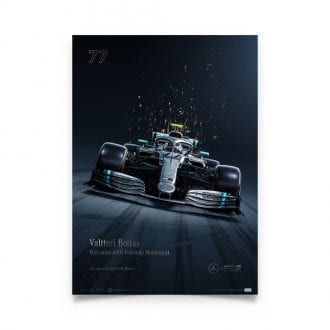