The first F1 race around the beautiful Mugello track, the Tuscan Grand Prix, was very different from pre-race expectations. Not in its outcome – Lewis Hamilton headed a Mercedes 1-2 – but in how it was arrived at.

Wrong Expectation 1. It would be a tyre deg race

The circuit’s corners are long and fast and comprise most of the lap. The lowest gear the cars are in is fourth (through the first turn of San Donato, the beginning of a fast climb up the valley and an even faster ride back down it). There are 15 corners but the brakes are used only six times. Through the flat-in-sixth downhill of Turn Seven, Savelli, Hamilton’s Mercedes was pulling an extraordinary 5.6g lateral force at 170mph. The double Arrabbiata turns are taken as one flat-in-seventh sweep.

“Why are they not melting and getting ripped to shreds?” asked one engineer. “I have no idea.”

The extreme stress placed upon the tyres by such a layout was expected to create such heat in them that the race would become about managing their temperatures. It was expected to be a lift-and-coast two-stop. It came as a complete surprise to pretty much every engineer in the pitlane when Friday practice showed this not to be the case. The rubber got very hot through the combined sequence of 6-7-8-9 but never into the runaway state seen at some tracks. They stayed in shape – and the only limitation was wear. They were, in other words, behaving pretty much like the tyres the drivers have been craving of Pirelli for years. They could be driven hard for lap after lap. They could be raced rather than nursed. It was going to be an aggressively-driven one-stop. 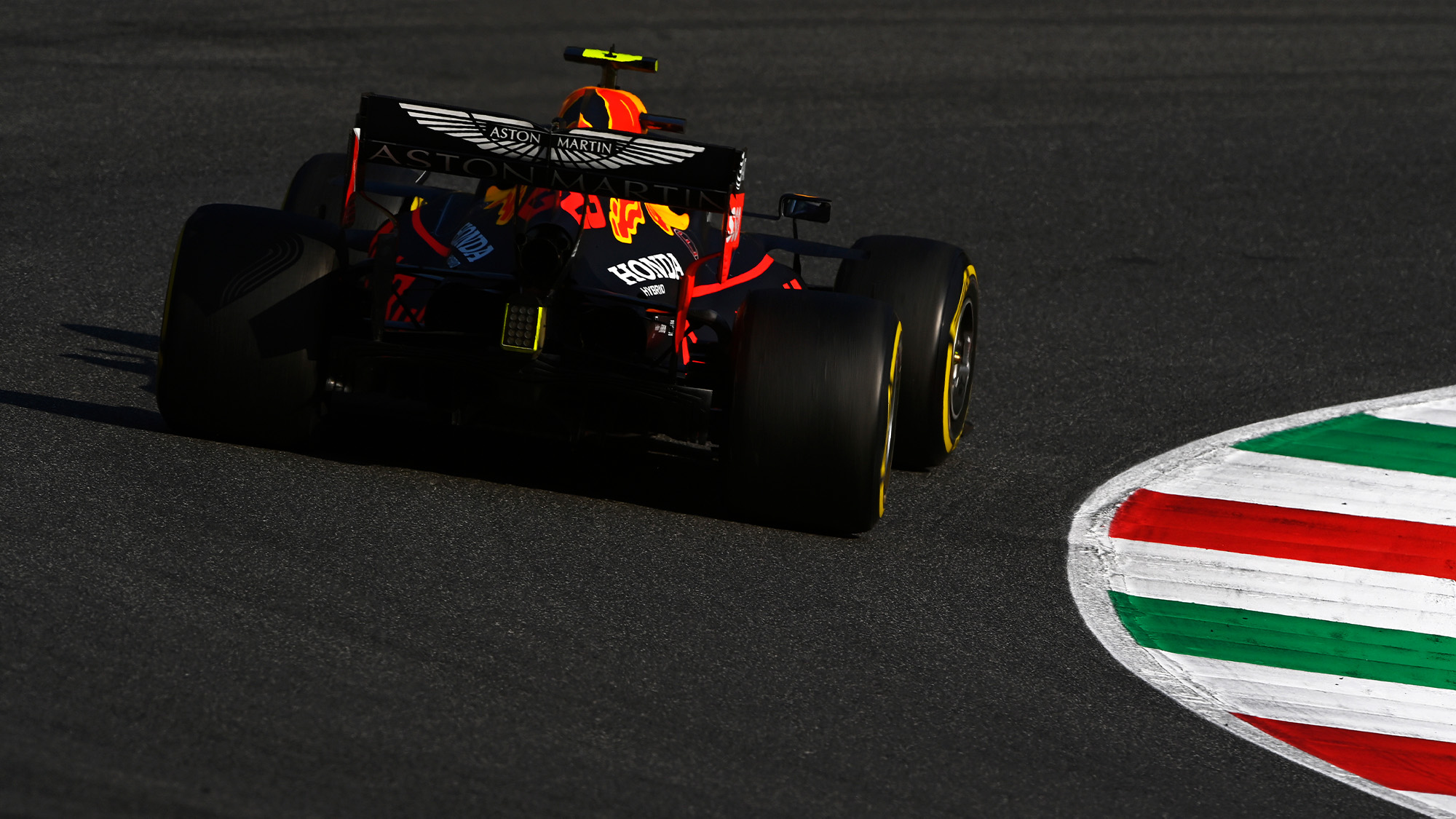 Rough track surface may have helped tyres stay in shape

“Why are they not melting and getting ripped to shreds?” asked one engineer. “I have no idea.” The working theory was that it was to do with the grain of the old-school track surface. In contrast to the super-smooth surfaces used at most modern tracks, this was much more like that of a typical road, rougher with a more open grain. It gives the structure of the tyre more to grab hold of. The smoother surface typical of most F1 tracks does not penetrate as deeply into the tyre’s surface and so its upper layers are doing a disproportionate amount of the work and generate a lot of heat.

The relative lack of braking was also believed to be playing its part. That and the absence of any low-gear acceleration zones meant the tyres were not subjected to as much longitudinal load as usual. Perhaps that has been driving the tyre behaviour to a greater extent than realised.

Wrong Expectation 2. Overtaking would be impossible 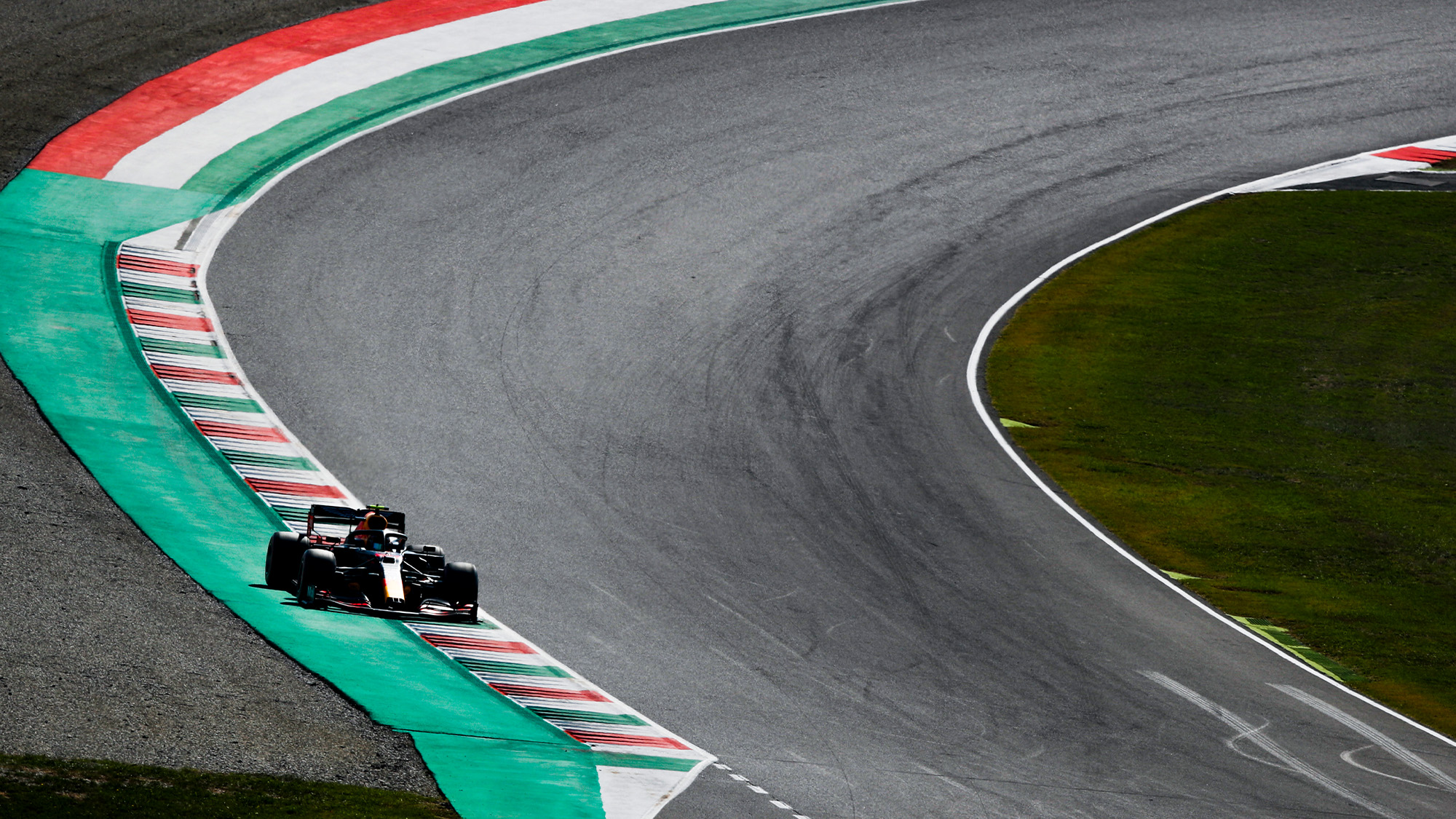 The combination of tyre behaviour with the aerodynamic wake from the cars through such long, fast corners and the lack of braking zones would surely mean just a high-speed demonstration. Not so. The wide, looping final corner, Bucine, could be taken on so many different lines that drivers were finding it was possible to stay out of the worst of the turbulence of the car ahead and to thereby follow much more closely than usual onto the long pit straight. With the help of DRS, you could use that to arrive at Turn One side-by-side and that turn’s shape and camber meant it was possible to go side-by-side through it, thereby extending the passing zone. It wasn’t easy but it was possible.

Old-school grass beyond the kerbing, and gravel beyond that ensured you’d be punished for errors. There was no talk about track limits over painted lines. But the first safety car came because of a simple first lap three-into-one squeeze that took out Merc’s only threat, the Red Bull of Max Verstappen and Monza victor Pierre Gasly (who’d initiated the incident). Verstappen had been about to retire anyway with a software glitch in the power unit. 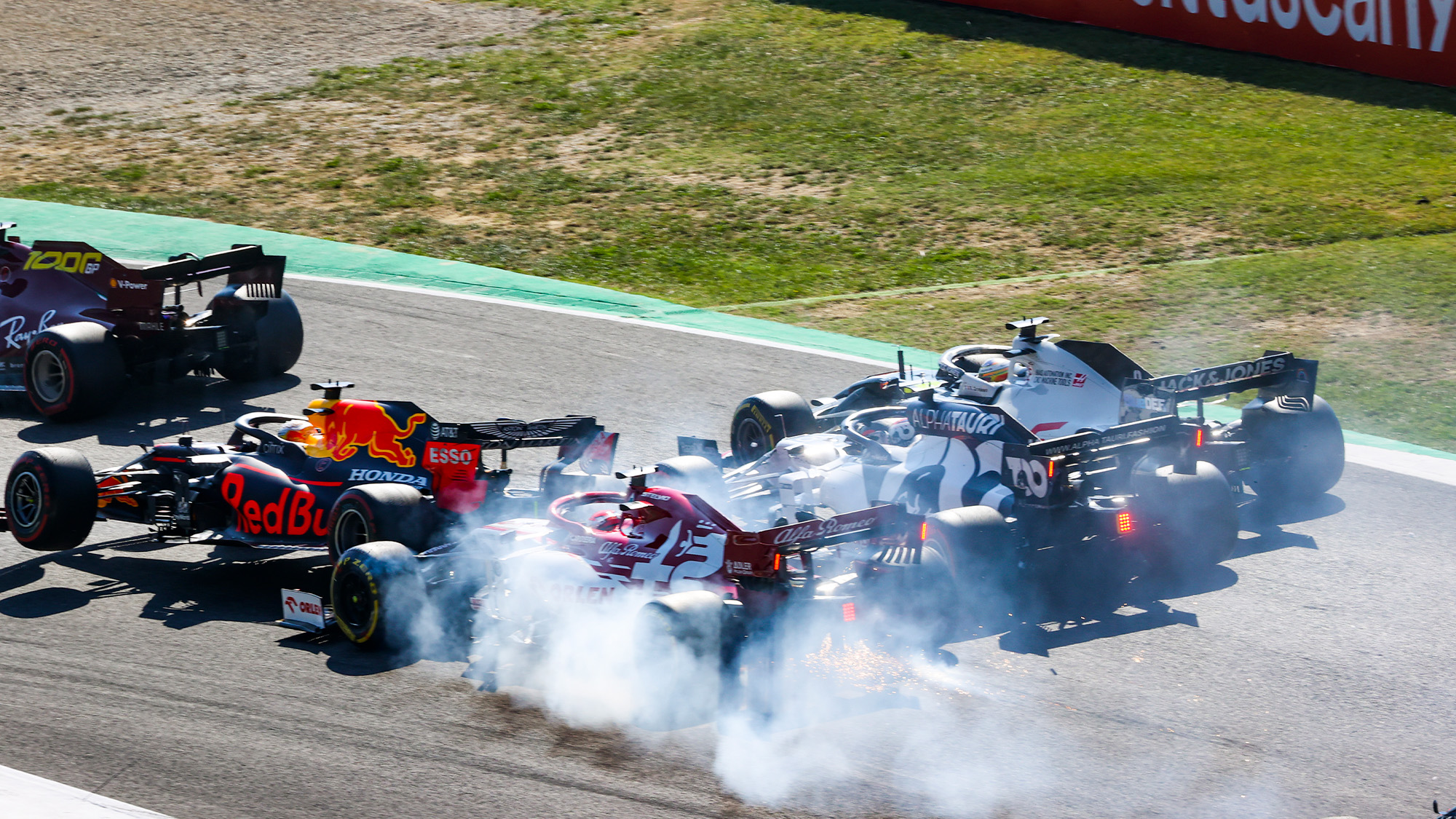 Lap One crash brought the early appearance of the safety car

It was also bad news for Bottas as he’d got a better launch off the grid than his pole-sitting team-mate and was leading. Even worse news was what happened as the safety car came in after seven laps. It put its lights out very late on its in-lap, meaning Bottas couldn’t create the gap behind it to give himself space to get the jump on his pursuers. So instead he crawled the 800 metres between the safety car line and the start/finish line, so as not to be slipstreamed into Turn One. This created chaos further back in the tightly-bunched pack as the accordion effect played out. A multiple car accident ensued and the race was red-flagged.

Upon the restart, Hamilton passed Bottas around the outside of the first turn. That was the race-winning move, giving him position for the rest of the afternoon. Bottas asked for an offset tyre strategy with which to try to beat him, the opposite of whatever Hamilton chose. But events overtook when the onset of an extreme vibration suggested the imminent failure of Bottas’ front tyre, as at the British Grand Prix, as its tread was worn to zero. He was pitted immediately and fitted with hards, as was Hamilton a lap later. 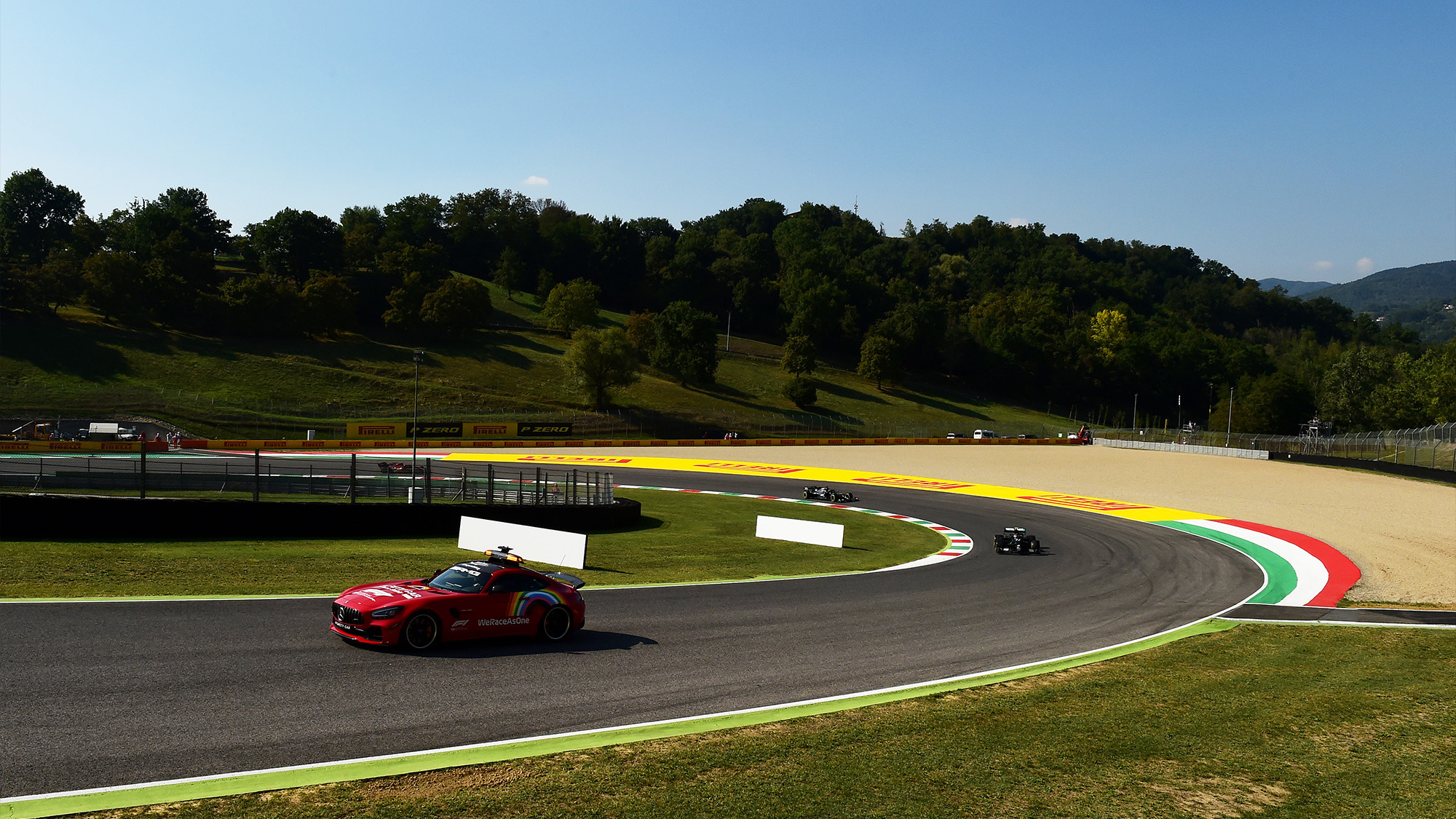 When the results of what looks set to be the only Tuscan Grand Prix are looked back at, the familiar sight of a Mercedes one-two and a Red Bull in…

The next safety car came as Lance Stroll – pushing hard, trying to pressure the third-place Renault of Daniel Ricciardo – suffered a suspected left-rear puncture going into the 170mph Arrabbiata 2. The Racing Point hit the tyre barriers after a wild trip through the gravel. Shortly after, another red flag as it was realised it was going to take a while to rebuild the barrier.
That left a 15-lap sprint to the flag. Hamilton won the restart. Bottas was beaten away by Ricciardo but got the second place back at the end of the lap. Ricciardo was left then trying to keep the advancing Red Bull of Alex Albon behind him. It wasn’t possible. The Red Bull was much the faster car and Albon was not shy about committing to an around the outside pass at San Donato to finally take his first podium.

The track is owned by Ferrari. It was celebrating its 1,000th grand prix. Charles Leclerc and Sebastian Vettel finished eighth and 10th respectively, though the former did run a highly flattering early third before falling back to the car’s natural level. Pre-race expectations were about right in this instance.